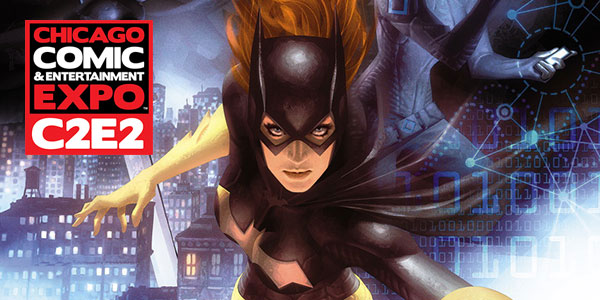 Last weekend, C2E2 — the Chicago Comic and Entertainment Expo — burst at the seams with incredible creators and events, and Comicosity had a front row seat! In the first of many interviews to come in the next two weeks, we were lucky to be able to sit down with writer Gail Simone and talk about another redhead near and dear to her heart. With Barbara Gordon nearly three years into her revitalized life as Batgirl, Simone shared some of how she’s grown, what the future holds for the dominoed daredoll, and what went into two of her recent stories featuring characters Alysia Yeoh and Burden coming out. 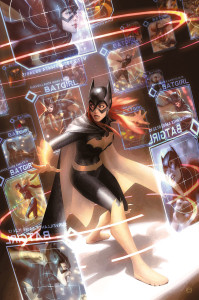 Matt Santori: Gail, it’s a real honor to sit down with you to talk about Batgirl. After almost three years, where do you think Barbara is today versus where she was in issue #1 – psychologically, physically, emotionally?

Gail Simone: Compared to issue #1, Barbara Gordon has worked through some of her post-traumatic stress. Not to say she’s worked through all of it, but she’s learning how to cope and live with the traumatic event that happened to her — and also how to move on with her life and live with the fact that she does have some survivor’s guilt. She’s been working through her issues. She’s still trying to get that perfect job that she hasn’t gotten and find a good love relationship.

I think she’s stronger now. She’s been through a lot in these 30-some issues and we’ve put her up against a lot of tough situations. All it has done has made her stronger.

MSG: One of the things that seems to define Batgirl so much more than other characters in the New 52 is this sense of overcoming — physical trauma, PTSD, family problems, even unemployment. Do you see this drive as core to her character or is it simply a matter of putting your subject through their paces?

GS: No, no, no. This is totally what I see as being core to her character. I think she should be a character who is inspiring, number one, and also I love the fact that Barbara Gordon’s desire is to help people and do good for them in Gotham. She will figure out a way to do that, however differently she needs to. She’s not going to let any circumstance or situation stop her from doing that.

Even at the beginning of the run where post-traumatic stress almost stopped her — one of the criminals pointed a gun at her — she completely froze and it ended up not leading to a great result. So, she’s had to work through that, knowing that she wouldn’t be of service or able to help if she was going to freeze every time she came up against a bad guy.

It’s just very core to her character that she helps people and does right. I look at her as the hope in Gotham. I think without Batgirl and a little hope, I’d be moving out! (laughs) 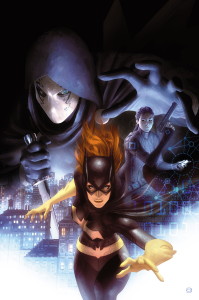 MSG: Well, that reminds me that in her recent guest appearance in The Movement, we saw a real difference of perspective between Babs and Virtue in looking at crime and its implications. Will we see reverberations of that encounter in the future and where does that leave Batgirl, usually the most liberal of the Bat-Family?

GS: One of the great things about telling stories in the DCU, in Gotham, and in Coral City as in The Movement, is that there’s room for a lot of different perspectives and viewpoints. I like to explore that. I don’t like characters to all have one mindset. That’s kind of boring and not a reality in life. It’s interesting and creates conflict when people have a difference of opinion. Even if their goal is the same, sometimes getting to that goal is completely different, and I love to explore that.

MSG: With your next issue, we will be encountering a Batgirl who believes Dick Grayson is dead. Where does that leave Babs’ romantic life?

GS: She’s known Dick Grayson since they were children, so her heart is going to be broken for that reason. But, she has dated some other people and will probably continue to search for another love interest, because when she and Dick parted last, they weren’t having a relationship of that kind. But, yeah, it’s shattering to her.

MSG: I have to say, since we haven’t had a chance to chat since her coming out, the work you did on Alysia Yeoh’s revelation to Babs was very powerful, and very important to a lot of us at Comicosity. Can you speak to the work you did leading up to that moment?

GS: The character of Alysia is really important to me. First of all, it would be really great if we had a trans writer writing a trans character, but I felt with the situation of Barbara having her first place out on her own — having a roommate, etc. — it would be really natural and organic for her roommate to be somewhere on the sexual spectrum that isn’t typical.

Any time I create a new character, I don’t want to create something that already exists. I just felt that this was really important: to have something new and bring a little bit of diversity. Natalie Reed is the one who gave up so much of her time helping me, and just talking through her own experiences, her friends’ experiences, and those of people in the trans community overall. It was extremely helpful and beneficial.

When the coming out happened in Batgirl, I think I spent three days crying, because my email was so full of stories from people, where it did mean a lot to them because of their sister or brother, their best friends or themselves. These stories were just so moving. I really did have a pretty emotional three days. 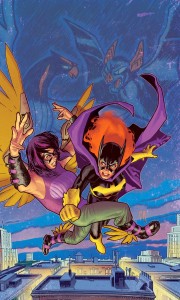 GS: And it really meant a lot to have people share that with me as well, to have the courage to share their personal lives as well.

MSG: And we saw a really significant coming out moment in the last issue of The Movement with Burden as well. Can you talk a little bit about what led to constructing that character and his relationship with his family?

GS: From the very beginning of The Movement, I knew this was going to be a group of people who were not typical comic book characters. I spend a lot of time speaking at colleges and talking to people online, and things just aren’t really black and white. I figured, if we basically had a young group of teenagers created today, what would that look like? And to me, The Movement in a lot of ways really represents that.

With Burden, these deep family issues — being raised in such a fundamental environment, and feeling outside — have led to him growing up with self-hate and self-loathing, and trying your best to break out of that. That’s the story I wanted to tell with him, how he came to accepting himself, not having that self-hate anymore, and creating that new family.

MSG: I think it’s an interesting contrast to Tremor, who is asexual and seems very secure in her own identity.

GS: Well, again, not everyone has the same experience in discovering their sexuality and where they are on that spectrum, if they even want to identify that at all. I think it’s important to show that it’s not a hive mind. Not everyone acts the same and develops the same, and has the same attitudes or outcomes.

MSG: You also have Katharsis, who originated in Batgirl and moved over to The Movement. Will we be seeing her return to the title any time soon? 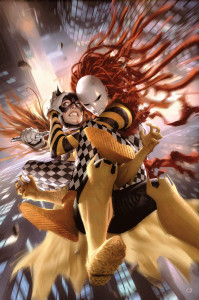 MSG: Ragdoll is set to make his reappearance in your next issue, making scores of fans giddy. Can we expect the same old Doll that we came to know and love or will we be seeing a newer interpretation?

GS: A little bit of both. I am really excited for people to see Fernando Pasarin’s rendition of Ragdoll, because it’s just so beautiful and disturbing at the same time. When the pages come in, I get really excited.

MSG: It seems like it’s been a really great awesome relationship the two of you have had on the book.

GS: Oh yeah. I love Fernando. I would work with him on something forever and ever.

MSG: Awesome! And you know I can’t walk away without asking: WHAT ABOUT CATMAN, Gail?

GS: (laughs) Who is this Catman you speak of?

GS: I have some new stuff coming up that we’re just not ready to announce yet — things I’m really really excited about. 2015 is going to have some creator-owned projects from me, and some other things I can’t wait to talk about!

MSG: Well, thank you so much, Gail! It’s been a pleasure!

Ragdoll hits the monthly Batgirl title in May, but tomorrow Barbara Gordon has to contend with Poison Ivy in this week’s Batgirl Annual #2 from DC Comics! Gail Simone is also the monthly writer on The Movement from DC Comics, Red Sonja from Dynamite Entertainment, and Tomb Raider from Dark Horse Comics.