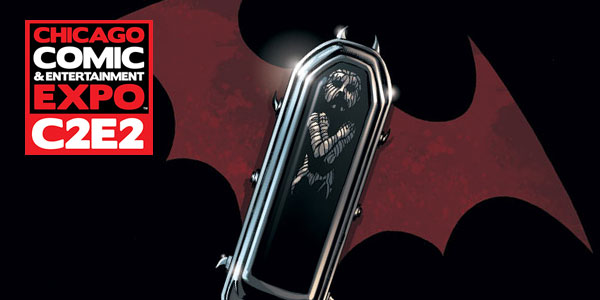 Fans have been on pins and needles since the death of Damian Wayne about the future of Robin in the DC Universe, speculating wildly on who would be next to don the classic red and yellow togs — if anyone at all! The wait is almost over, as Batman and Robin writer Peter Tomasi has confirmed that by the end of 2014, Batman’s 75th Anniversary, there will be a Robin! Who that will be is still a mystery, but Tomasi generously took time out of his C2E2 schedule to talk to Comicosity about the foes Batman will find himself up against in the coming months, and just whether or not Batman even needs a Robin. 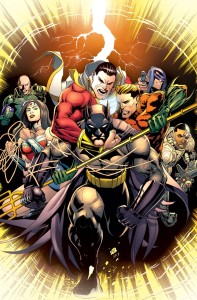 Matt Santori: Thanks for taking time out today, Peter! Big question up first: does Batman even need a Robin?

Peter Tomasi: Yes, absolutely. To me, the Dynamic Duo is always something that’s really sort of precious — that sidekick action. I want to see a guy who’s always in the dark shadows have someone to bounce off of. In my mind, it makes him a more interesting character when he has someone he can play off of and work out things with. And especially with someone who is his son, it brings out more of the inherent drama there. It makes it more interesting as a writer to do.

So, yeah, I think he does. He needs a Robin, especially in a book called Batman and Robin. (laughs)

MSG: We’ve seen a few potential candidates for the Robin role in the past year — Carrie Kelley chief among them. Is Carrie still going to play a role in the ongoing story?

PT: I can’t say. Don’t want to spoil anything, but you never know.

MSG: OK. Well, let me ask this: after seeing his ten year old son take on the role and die, is it reasonable that he’d let another partner take on the Robin mantle specifically?

PT: Yes, it is definitely reasonable to come to that conclusion. The way it’s being written and structured, you will buy why Batman lets this Robin into the Batcave, so to speak. 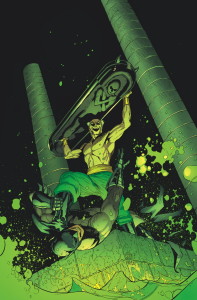 MSG: Since Damian’s death, we’ve seen Bruce go through an emotional journey, leading into the current geographic one — chasing Ra’s al Ghul around the globe. Where do you see Bruce Wayne in the process of healing at the moment?

PT: Right now, in the Hunt, this is someone who took great pains to bury his pain. You don’t ever forget something that’s so traumatic, so he’s buried it. He’s operating and functioning and having to live, of course, as anybody does who has to deal with a loss like that.

But Ra’s made the mistake of pulling a scab that he shouldn’t have pulled. He’s reopened the wound and Batman is pretty pissed off about it. He’s definitely in a bad mood, and Ra’s is going to have some serious ‘plaining to do!

MSG: Ra’s is an interesting foe to bring to the forefront in this story, and not simply because of his blood relation to Batman’s son. What motivated the choice of a man who constantly cheats death as the next opponent for Batman?

PT: It was very organic. He’s the right character. There’s so much history between them, and Talia is a connective tissue right there. It felt like a real, true choice — it wasn’t a leap. It made sense for Ra’s to be part of this whole storyline, because both the relationship between him and his daughter and that between a father and his son have been shattered. There are just all these great parental, psychological aspects to go into. It’s been a lot of fun.

MSG: Darkseid too, hinted at in July’s previews, is a curious choice for a foe for Batman at this particular moment, especially given the history he had with Batman’s own death, pre-New 52. Can you talk a little bit about bringing in the God of Death?

PT: The New 52 has obviously kept certain things. Batman has had some changes, but they weren’t huge, wholesale changes. As I said before, there’s a real organic closure to bringing in Darkseid and all the things that are coming in that regard. I think fans will really enjoy where we’re going with. 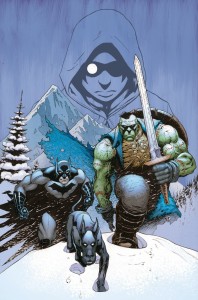 MSG: Coming up, we’re going to be seeing Batman reunited with Frankenstein, who he had a little run-in with immediately after Damian’s death.

PT: Just a little run-in! (laughs) Left him in pieces, but otherwise they had a great time together!

MSG: What can you tell us about what kind of place these two heroes start from when they meet again?

PT: They start from a very antagonistic place. Frankenstein is not a happy camper.

One of the lines from the book is “You left your Red Robin friend and it took him 27 hours to put me back together!” So, yeah, he’s not very happy about seeing Batman again. He’s got an axe to grind, so to speak.

MSG: You and Patrick Gleason are one of the very very few teams to remain consistent three years later after the New 52 launch in 2011. To what do you attribute your success as a team?

PT: I don’t know. We’re just really lucky to have a great relationship. We talk story out and we bounce stuff each other. It’s a lot of fun. He’s not only a great artist — he’s a good friend, and we are sort of on the same page or wavelength in the way we approach stuff.

It’s a perfect relationship in terms of a working one and a friendly one. It’s been really great, and I’ve been very lucky to have him on the book.

MSG: Any final thoughts or special teases for the upcoming Robin Rises storyline?

PT: Just that Robin Rises: Omega is the beginning of our story. It will end in December and there will be a new Robin in December for the DCU!

MSG: Awesome! Thank you so much, sir!

Batman and Robin continues from DC Comics in just a few weeks with its Batman and Frankenstein #31 issue, written by Peter Tomasi. July 2014 launches Batman’s 75th Anniversary in a really big way with the debut of Robin Rises: Omega #1, leading to the return of a Robin to the DC Universe!