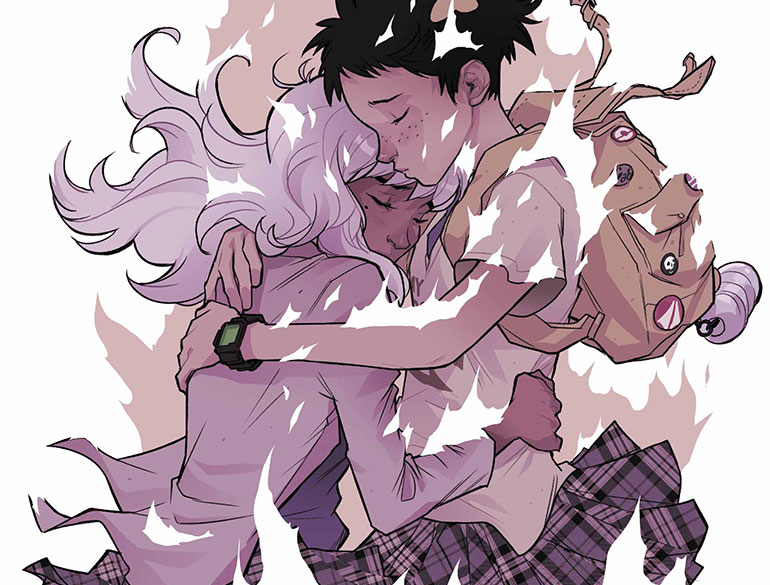 Every so often, a comic book series comes along that touches the heart in a way that few things have before it. When Gotham Academy #1 was solicited in 2014, fans didn’t quite know what to expect from the team of Becky Cloonan, Brenden Fletcher, and Karl Kerschl. But it didn’t take long to find out that DC Comics had a hit on its hands in a genre of book it hadn’t done in years: Young Adult.

But before it goes gentle into that dark (k)night — hopefully to return in one form or another before too long — let’s revisit the top ten moments of the series and salute the Detective Club one last time. 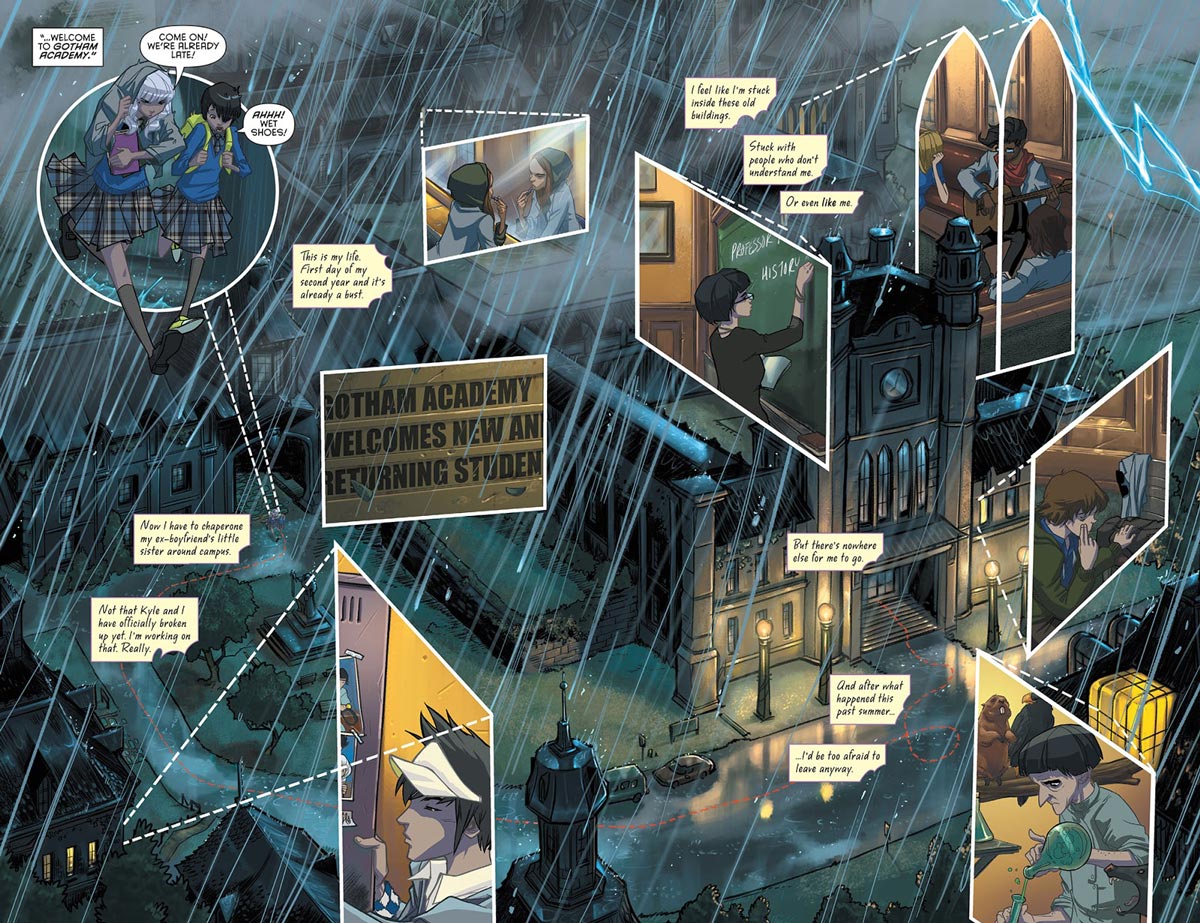 Right away, the students and instructors at Gotham Academy intrigued fans through a combination of mystery and Easter eggs galore — so much so we were left wondering if everyone had their own secret to tell. Some of them did (exactly how did Colton get that black eye?) and some were just beginning their adventures with Olive and Maps.

Nevertheless, seeing characters like Professor Milo, Aunt Harriet, and Bookworm inhabiting this world was an immediate callback to the glory of the Batman Universe from years gone by. What better way to let us know we had an instant classic on our hands? 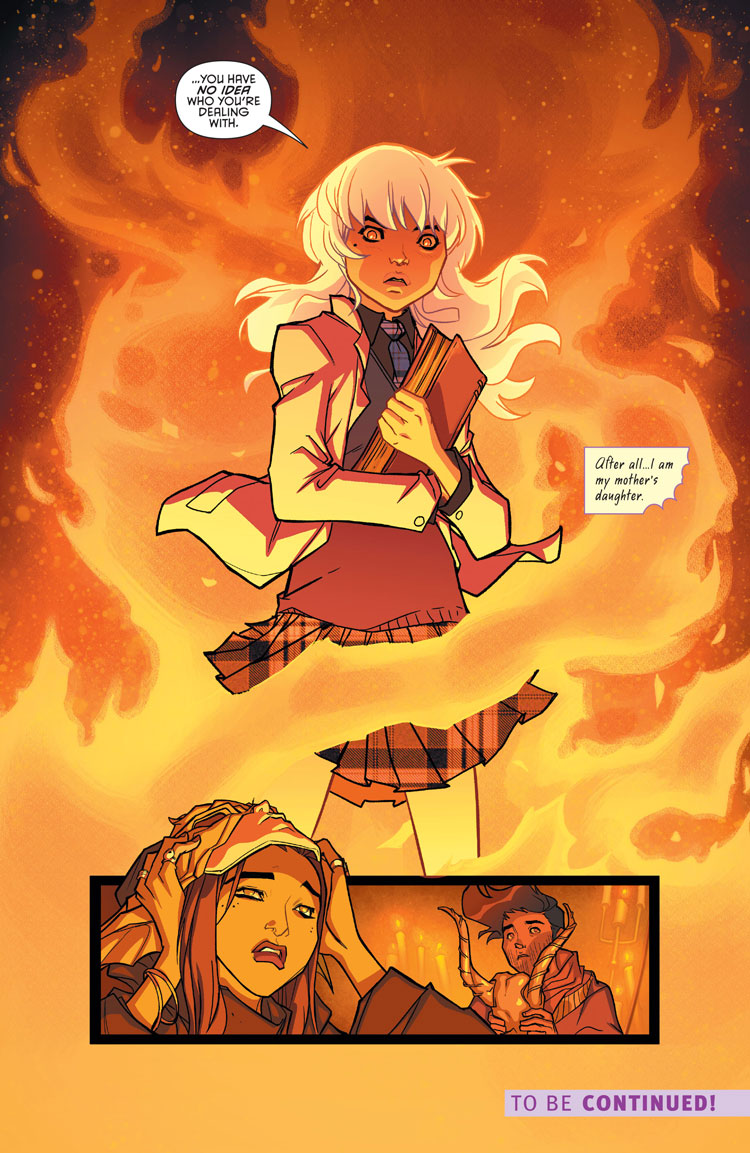 One of the ongoing questions of the series until very recently has been whether or not Olive Silverlock really did have pyrokinetic powers. It always seemed like she did, but there was always a possible rationale for the fire that always seemed to follow in Olive’s wake.

As we got to learn more about Calamity, the super-villain Batman managed to put away, the question stopped being whether or not Olive had powers, but whether Olive followed her mother’s legacy of madness as well. 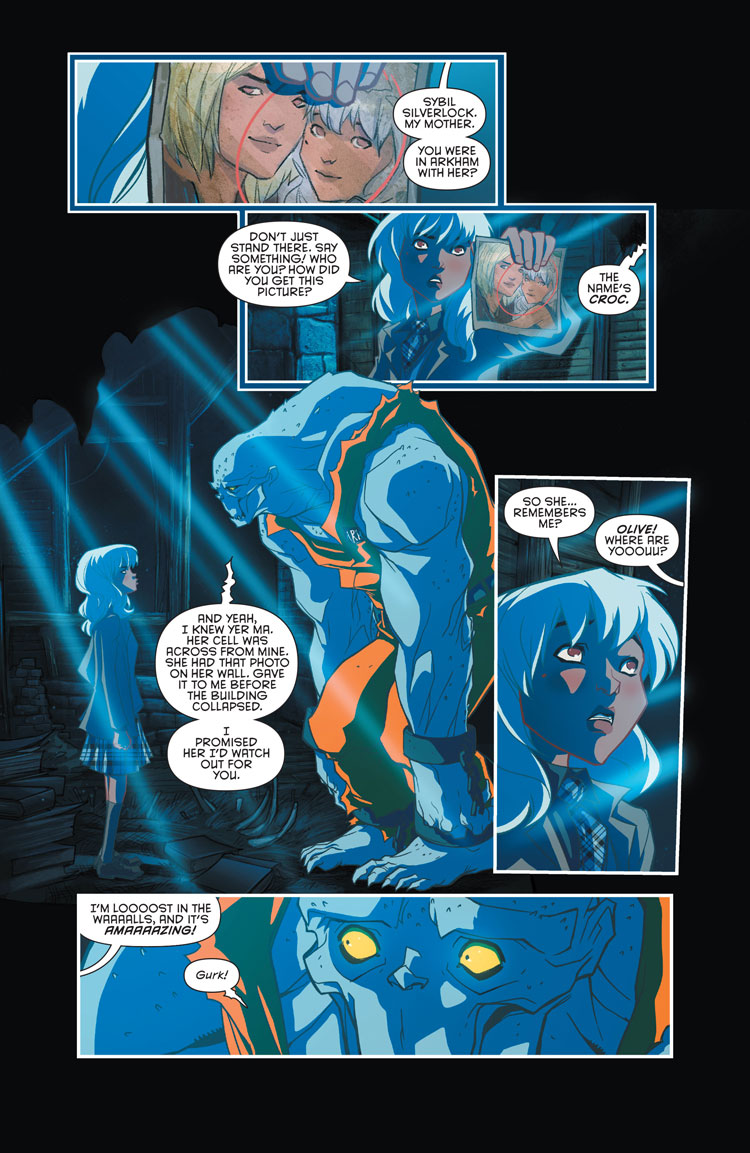 3. Killer Croc has a heart.

The great thing about seeing the world of the Dark Knight through the eyes of children is not every monster ends up being a problem that needs to be put down. Discovering Killer Croc in a ruined building on campus, Olive got to connect with someone who knew her mother — and promised to help protect her. The kindly beast may not be on Batman’s good side, but his heart is definitely in the right place when it comes to the girls of Gotham Academy. 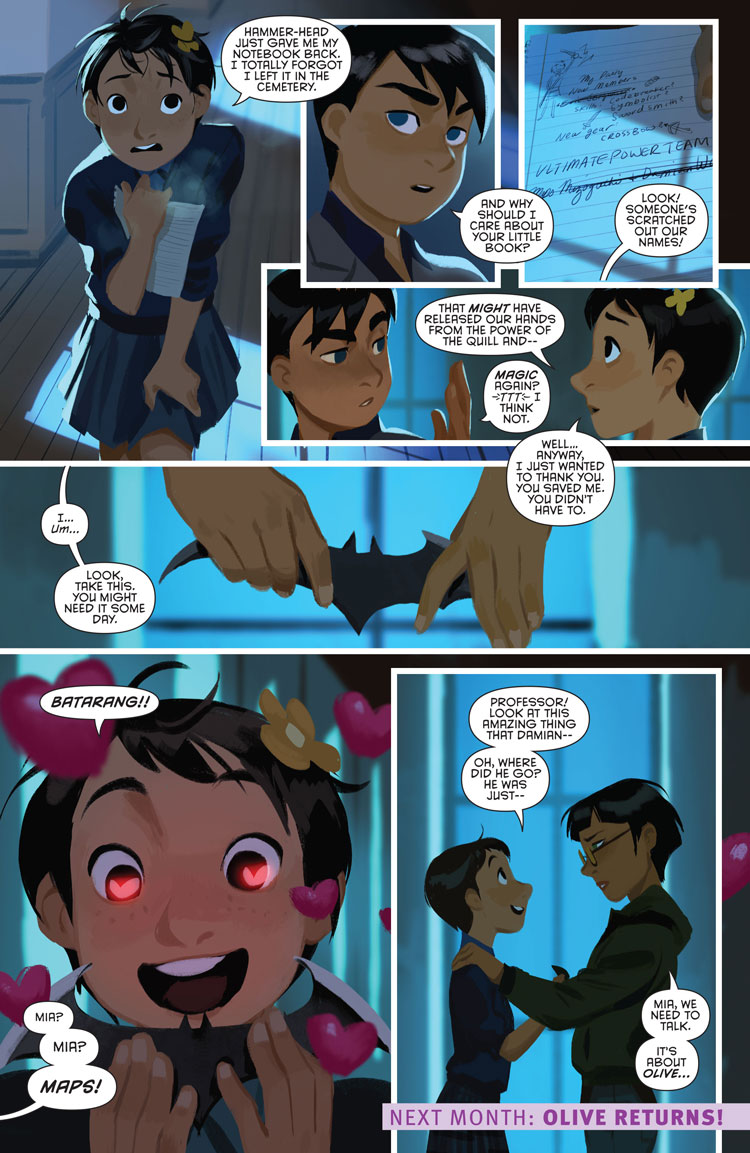 4. Maps gets a Batarang.

So much of the secondary story in the entire series revolves around Maps Mizoguchi becoming the hero she wants to be.

So much of the story involves everyone else recognizing the hero Maps Mizoguchi already knows that she is. That an actual member of the Bat-family is the first to hand her a batarang (and later, her own Robin mask!) is unbelievably cool. That it’s Damian Wayne, someone who rarely trusts anyone, only makes Maps’ victory all the sweeter. 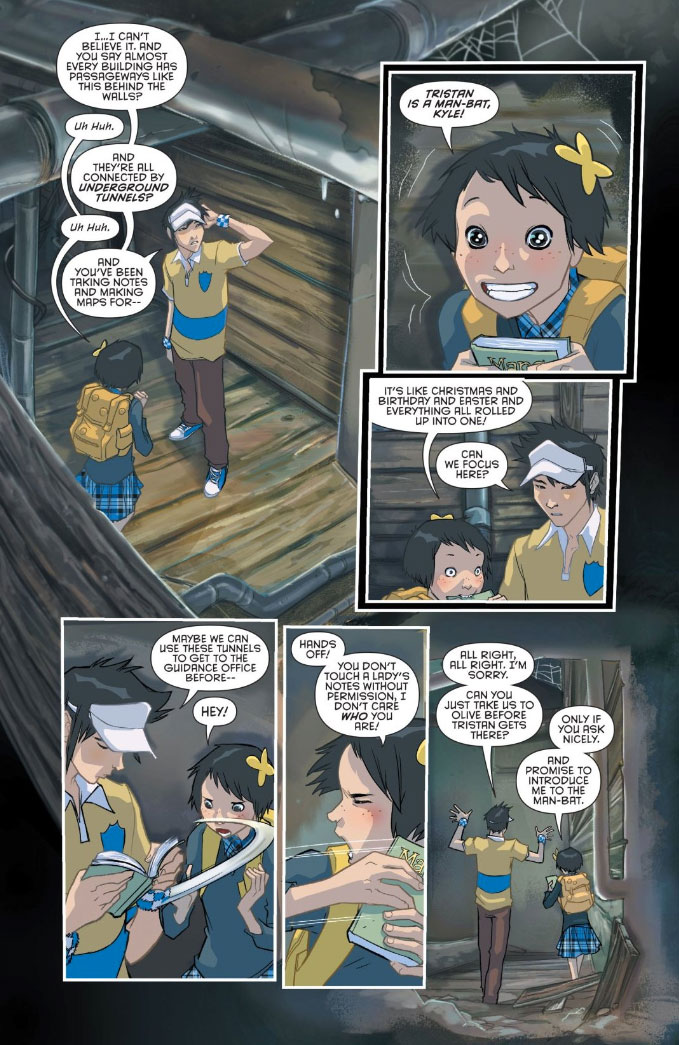 There are very few things as hilariously adorable in Gotham Academy as when Maps gets excited about something — here, the revelation that one of their classmates is a Man-Bat. What’s even crazier is that Tristan is far from the only feral occupant of the school grounds, giving Maps, Kyle, and the rest of the Detective Club lots to investigate. It’s all very curious, but we’re mostly here for that face Maps displays, infectious in its pure joy. 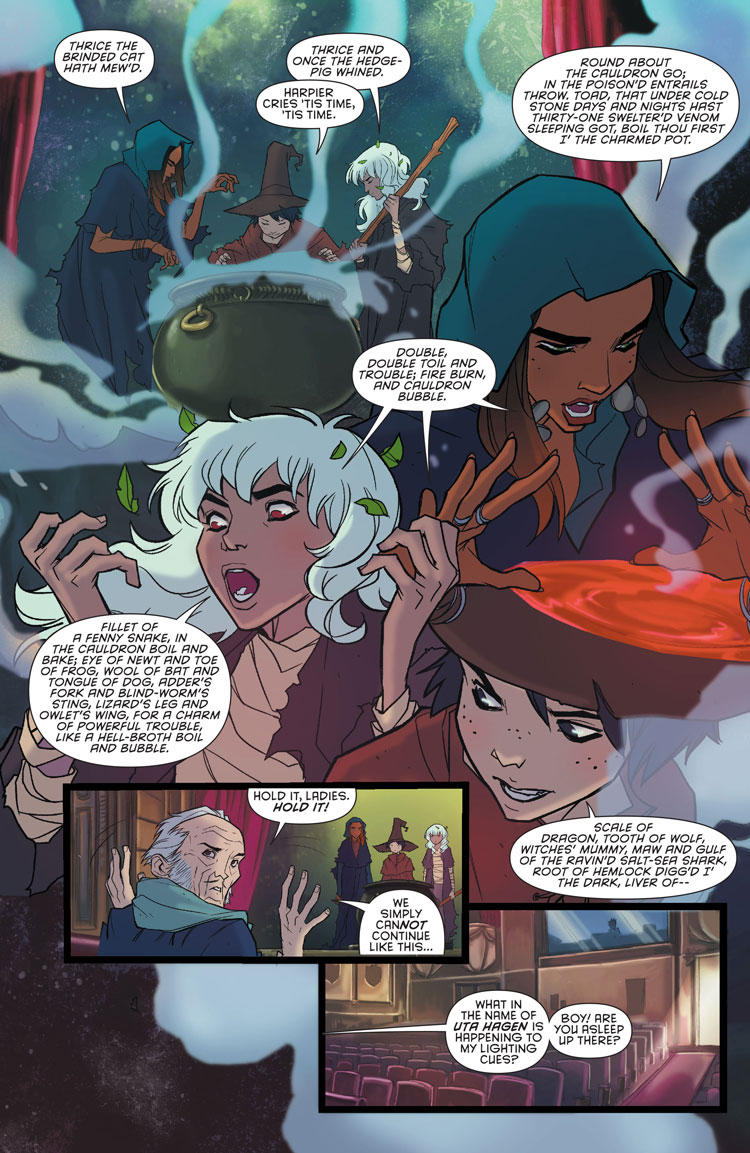 Buckle up, literary stans. We couldn’t have an all-ages, gothic horror book without a segue into classic Shakespeare with MacBeth. Taking roles in the school play to uncover yet another bit of the mystery of the school, Olive, Maps, and Pomeline Fritch (a student witch in her own right) get to recite long streams of the play’s script in the pages of the issue. 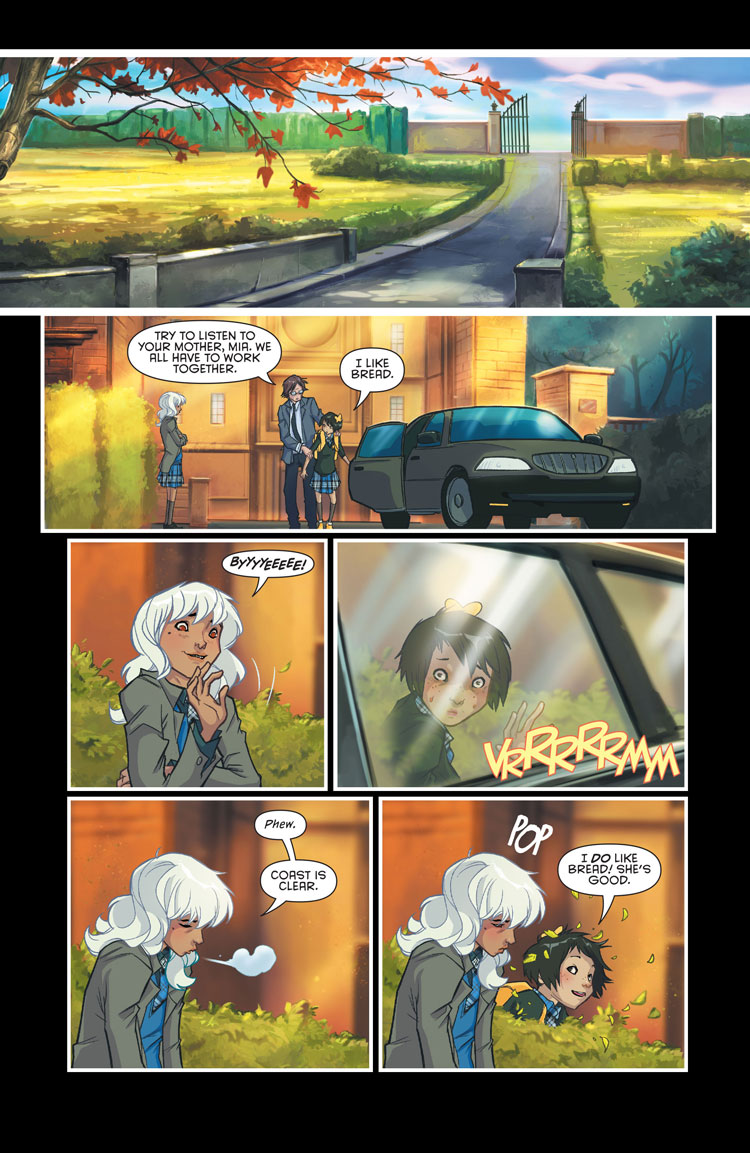 A big part of the mystery uncovered in the process of performing MacBeth is the identity of Katherine Karlo, Maps’ first roommate at Gotham Academy. Ever nervous and tenuously delirious, Katherine ended up revealed as not-quite-human, a piece of the villain/hero Clayface that was left behind and had a sentience all its own. Like Olive, Katherine is cared for by the instructors of the school, left there by Batman.

And also like Olive, she uses her powers to to help out, even though she’s not a central member of the Pizza Club gang. Shapeshifting to replace Maps so the young hero can stay behind and help find Kyle, Katherine plays the role of a lifetime — and pulls it off with a single line: “I like bread.” 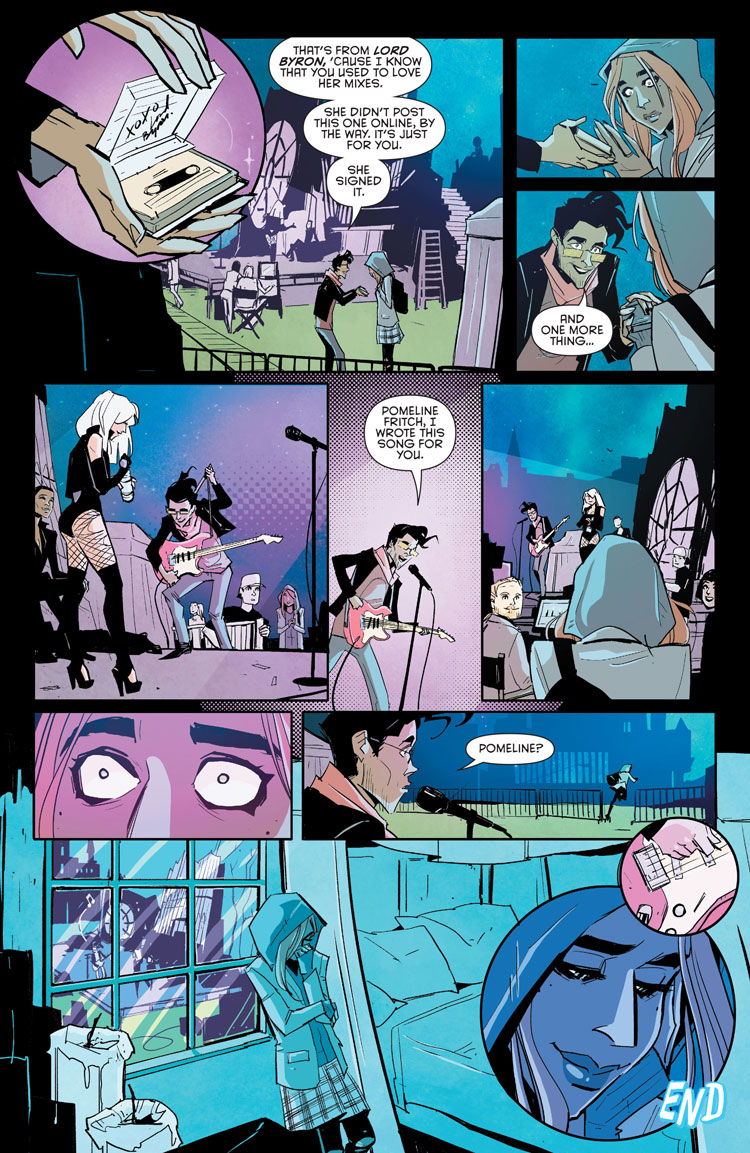 Young Heathcliff may featured heavily early on in the series, but he quickly disappeared, leaving his classmates behind to do — what?

Well, it wasn’t long before Heathcliff showed up in another DC Comics title: Black Canary, written by one of Gotham Academy’s co-writers Brenden Fletcher. Now a road manager (lying about his age, of course), Heathcliff is welcomed as the band’s go-to problem solver — although he never gets to perform alongside D.D. and her crew. No, his grand performance ends up being for the girl he left behind, Miss Pomeline Fritch. 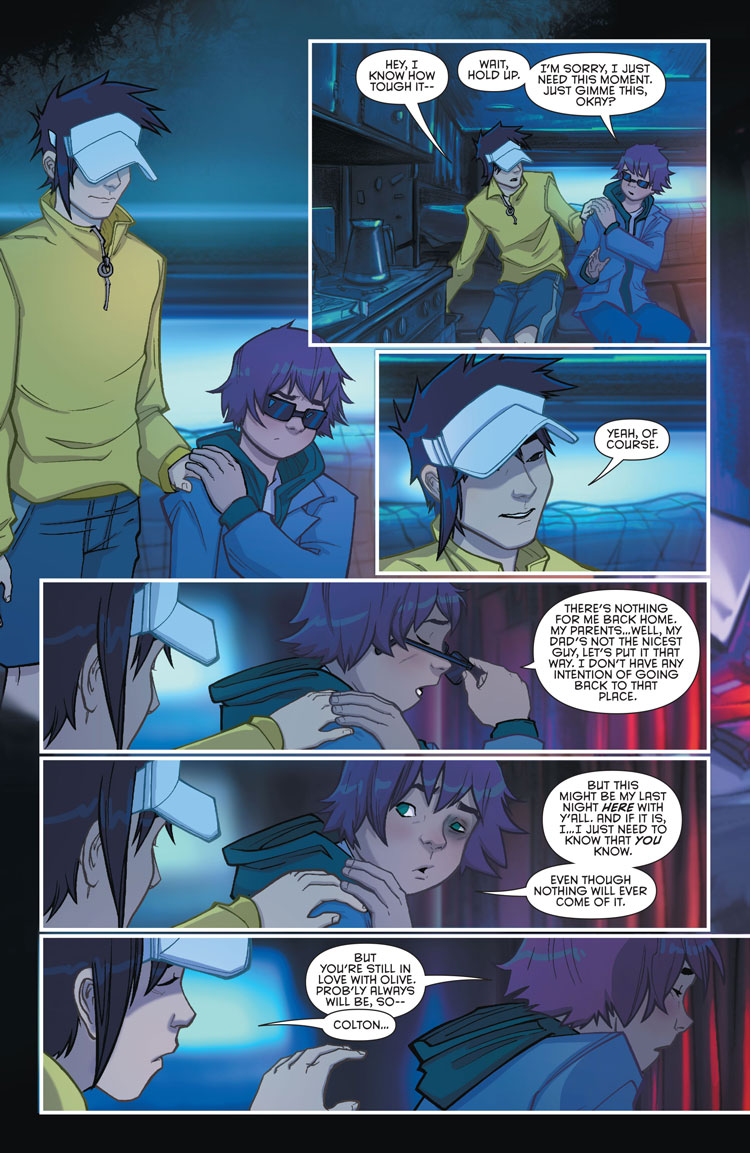 9. Colton comes out to Kyle.

In one of the most moving scenes in the entire series, Colton finally finds the courage to admit his feelings for Kyle to his best friend on his own terms. The result? Instant acceptance. 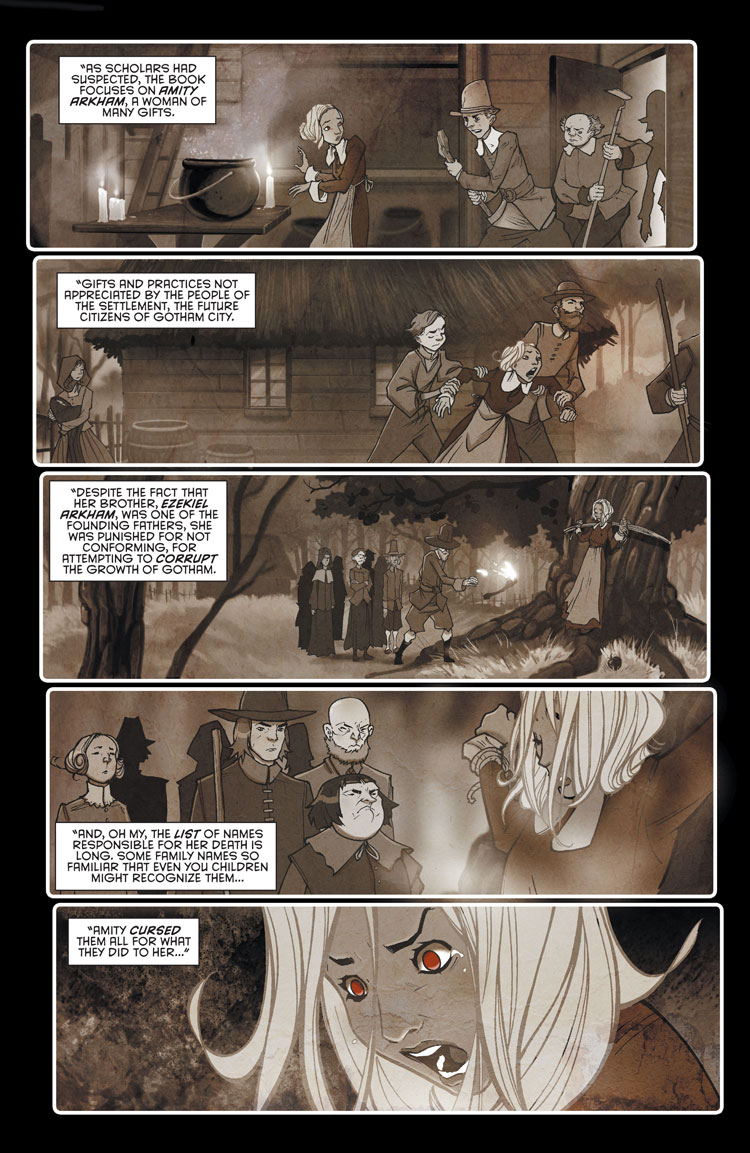 10. The Silverlock origin is revealed at last.

The central mystery of the entire series at last revealed, we are treated to a history lesson tied back to the earliest days of Gotham to explain the powers Olive and Calamity both exhibit, what role Pomeline has to play in the bigger picture, and why its been so important all along to protect Olive from the one person who could do her in — herself.

Today’s comic closes that chapter on Olive Silverlock’s life, and hopefully opens a new one for the entire Detective Club. Because if we have to go too long before seeing Maps, Olive, Kyle, Colton, and Pomeline again, well, there’s going to be hell to pay. 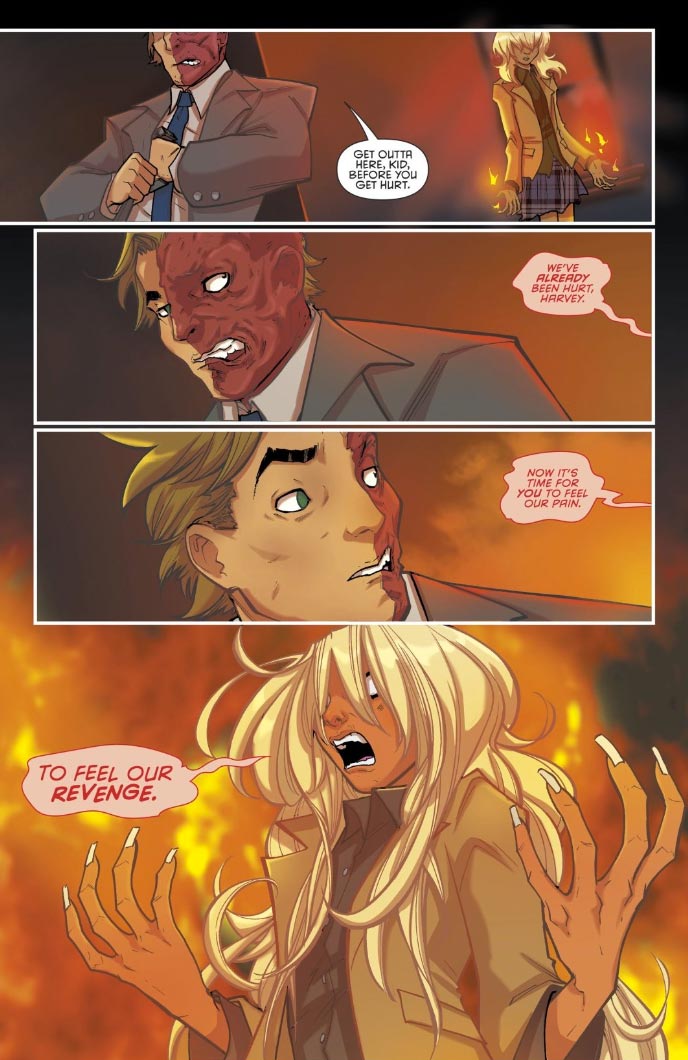