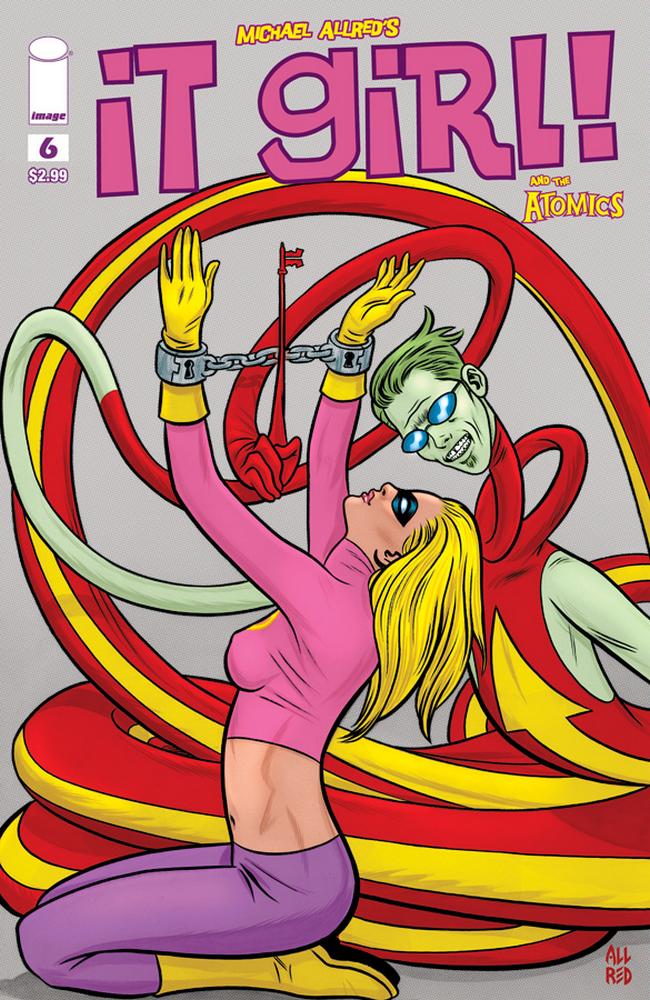 Image Comics has announced that Chynna Clugston-Flores will be providing art for It Girl And The Atomics #6. 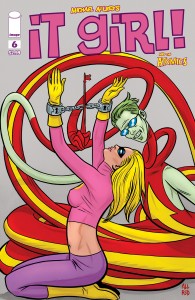 February will bring with it a special Valentine to readers ofMichael Allred‘s IT GIRL AND THE ATOMICS. Chynna Clugston-Flores, creator ofBlue Monday, is teaming up with series writer Jamie S. Rich for a standalone issue about a fan-favorite character from the MADMAN universe, Mr. Gum.

Like the other members of The Atomics, Mr. Gum is a former beatnik who developed superpowers after being exposed to alien spore — in his case, the power of elasticity. He and the other Atomics are on a galactic concert tour, and IT GIRL AND THE ATOMICS #6 is a not-so-typical day off. To impress a girl, Mr. Gum decides to prove his rock-star status, and ends up tangling with more trouble than he bargained for. And possibly a giant space monster.

“Mr. Gum was probably the character I was most sad not having as a regular in It Girl and the Atomics,” said writer, Rich. “He’s your typical fast-talking, wise-cracking rubber man, and I’ve always thought he was a blast. I wrote a four-page bit with him in Liberty Comics a couple of years ago, and it was like unleashing my Id. A chance to write visual and verbal jokes!”

Clugston-Flores’s art is known for its manga-influenced style, high energy, and mod sensibilities, the perfect combination for the space adventures of an ex-Beatnik. She also has experience, being the first artist besides Michael Allred to draw It Girl, in a one-shot published by Oni Press when Rich was editor there.

“When I was casting about for someone to have pop in for fill-in issues, Chynna was just a natural choice,” said Rich. “Particularly for Mr. Gum. The three of us have a shared sense of humor: me, Chynna, and Gum.”

“I was very excited to get a chance to draw an entire comic dedicated to Mr. Gum, a personal favorite, and be involved with It Girl again, as well as collaborate with Jamie after so long! Jamie’s right about our sense of humor, and Mr. Gum certainly personifies it when he’s at his worst (or rather, most amusing, in my opinion!),” added Clugston Flores. “Not to mention being given the chance to draw aliens, monsters, and insert some of my own ’80s pop culture references at random in the art without anyone seeming to mind.”

IT GIRL AND THE ATOMICS #6 will be in stores on January 23!

Image Comics is a comic book and graphic novel publisher founded in 1992 by a collective of best-selling artists. Image has since gone on to become one of the largest comics publishers in the United States. Image currently has five partners: Robert Kirkman, Erik Larsen, Todd McFarlane, Marc Silvestri and Jim Valentino. It consists of five major houses: Todd McFarlane Productions, Top Cow Productions, Shadowline, Skybound and Image Central. Image publishes comics and graphic novels in nearly every genre, sub-genre, and style imaginable. It offers science fiction, romance, horror, crime fiction, historical fiction, humor and more by the finest artists and writers working in the medium today. For more information, visitwww.imagecomics.com.