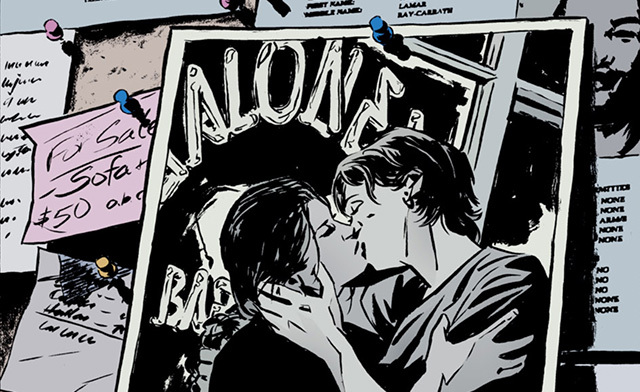 It’s been almost nineteen years since I came out, not quite half my life, but edging closer to it year after year. Even way back then, I felt like I was coming into myself late, twenty-one years old and in my last year of college. Today, I read about out LGBT teenagers in high school (heck, even middle school) and I go slack-jawed in awe at the courage that must take. Not that it’s a new phenomenon — my best friend today was bravely out as a high school student — but I still think back to who I was at that age and how absolutely impossible that transition would have seemed.

The closet is a remarkably cold place for something so insulated from everything around you. It appears to one as a protective armor, a shield from the risk of emotional and physical attack from outside oneself. The reality is that it is more like a straightjacket, a confining garment that constricts the more you struggle against it, until you manage to perform that one magic trick that releases your bonds.

Up until the days, weeks, months that I came out, I could imagine only the worst. As lonely and frighteningly tenuous as that closet feels when within its walls, representing myself with what is essentially a half-lie was the only life I knew until then. No matter what you read or witness or hear about life outside the closet, you can’t truly know it until you’ve made that leap. And that is scary stuff.

It’s not as if the understanding of those around you — friends, family, colleagues — is completely antithetical to the truth. But sexuality pervades the very essence of each of us. Not our sum total, or even divisible half, but a strong current that flows through every aspect of our most basic selves, making it feel as if everything is tainted when that one part is misrepresented. The build-up of that sort of pressure can be crippling, but so too can its release be equally, if not more, freeing.

I was lucky in many ways in regard to my coming out. I got to choose the moment; it wasn’t chosen for me. I had time to prepare. Laugh if you must, but two of my dear friends — lesbians long out of the closet themselves — helped me make note cards with possible arguments to have on hand when I spoke with my parents on the phone. I had parents who loved me, not despite my sexuality, but in concordance with it. My friends were rock solid behind me, even afterwards when I spent the goodly part of a year “catching up” on every gay-themed film, book or discussion I could wrap my arms around. The tedium of that stage in my development for those around me cannot be overstated, I think.

I was blessed to be studying (and eventually working) in a field where being gay was prevalent, moving to a major metropolitan city with a large gay population, and met my husband — now of over 16 years — pretty early on. So, today, it’s easy for me to look back at the process as if it couldn’t have gone any other way. And while I can assuredly echo that it almost always does indeed get better, the honest truth is that every LGBT story is not the same. Some situations, sadly, only get better by degrees.

Renee Montoya is the perfect, albeit fictional, representation of that truth. 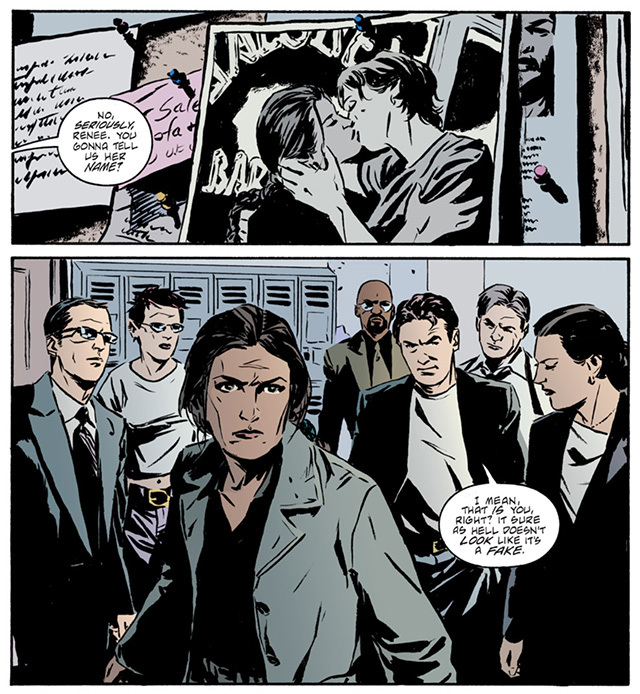 One of several lead characters in DC Comics’ 2003 series Gotham Central, and focus of the second story arc entitled Half a Life, Renee Montoya is a detective in the major crimes unit of the Gotham City Police Department. A good cop in possibly the most corrupt city in the world, Montoya stands out among her peers as incorruptible, having even survived the political nightmare of a dirty (although well-meaning) partner, now since retired. She is tough, smart and has earned the trust of both the police commissioner and the Batman himself. And she has a secret.

Greg Rucka, sole writer on issues 6 through 10 of the series he alternately wrote with fellow Gotham scribe Ed Brubaker, presents a tale of the closet unraveling in possibly the worst-case scenario one can imagine. Not only does Montoya get outed publicly at work by the sudden appearance of a surveillance photo pinned to the bulletin board, but a series of orchestrated events lead her to become chief suspect in a murder investigation with protection of her lover Daria as the assumed motive.

That plot evolution aside, however, Rucka delivers two key scenes to Montoya’s coming out narrative that boldly reflect his commitment to telling the harsh truth behind the detective’s circumstances: the counsel from Maggie Sawyer, Montoya’s superior officer, and a confrontation with her brother Ben over a similar photo delivered to their parents. 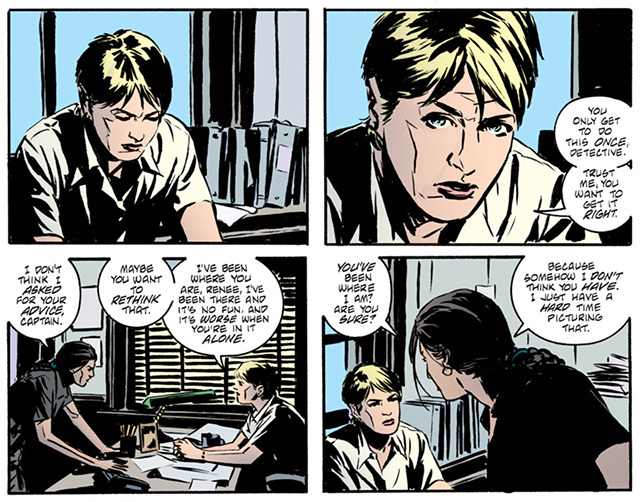 In Sawyer, Rucka presents someone who has come out the other side of Montoya’s travails, an out lesbian holding a significant position of power in what is historically one of the most homophobic and misogynistic professions. She is the golden ideal that Montoya, quite reasonably, cannot project her own future onto.

Whether motivated by anger, fear, or most likely both, Montoya divides herself from Sawyer’s experience along lines of race and culture, positing that her boss did not come out as a Latina queer with a family tradition steeped in religious guilt and brimstone. This is a very true distinction and a bitter reality for women and men of color coming out from more traditional backgrounds and families. But there is also a sense that one can’t truly see the possibilities of an out life from inside the closet. The risks still appear to loom too heavily over the rewards, that even were Montoya to see her own future in a magic mirror, it would still remain unrecognizable.

Rucka’s ultimate argument on the closet, verbalized by Sawyer’s final thoughts to Montoya, is particularly astute: “It’s a one-way door, Detective. Once the closet is open, it doesn’t shut again. What you do next, you get to live with it for the rest of your life.” Whether she realizes it or not at the time, Montoya takes this advice into the next encounter with her brother, who shares their parents’ dismay over the shock of her lesbianism. 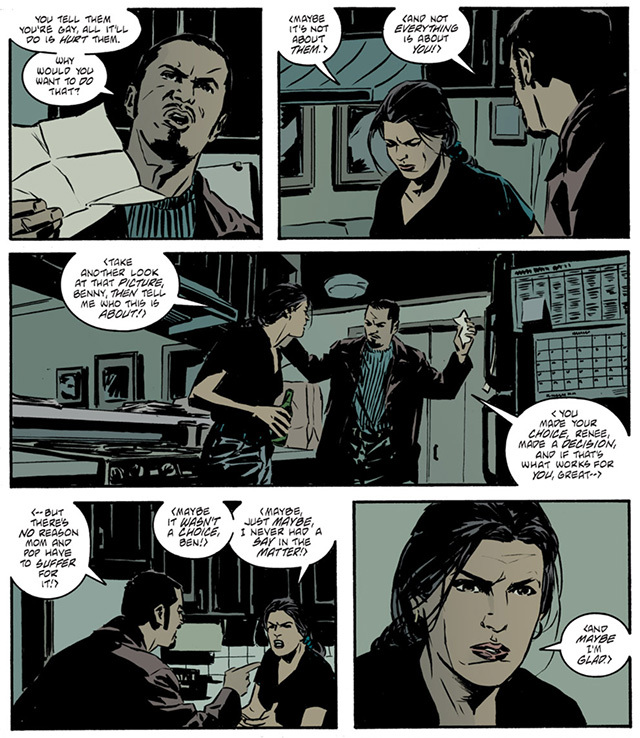 Ben Montoya isn’t just coming to this news, however. His sister shared her secret with him over ten years before, to poor reception. His role in enabling her closet by covering for Renee’s sexuality with their parents is an insidious, but common aspect of the type of open secret. Those family and friends who cannot immediately accept and embrace their LGBT sister or brother become implicit in the half-lie, reinforce the closet walls as it were, and are posed to suffer from its destruction as well. Ben takes it upon himself to convince his parents the photograph they received in the mail was doctored, that some freak criminal sent it as method of destroying their daughter’s credibility.

As it stands, that’s pretty much what happened, but Montoya’s unwillingness to go along with his continued illusion of her heterosexuality is distinctly powerful. As they argue, notably shifting into Spanish to speak in their parents’ language of origin, Montoya expresses clearly her belief that being gay is at the core of her being, not a so-called “lifestyle choice,” and that it is in fact a positive part of herself. No matter what institutions and preconceived notions crumble around her now, she has that admission to depend on. Rucka may throw madmen and dirty cops and frame jobs at his fictional heroine, but this foundation of self-worth and respect means the reader can fight back alongside her, reflecting back her righteous indignation and pride. 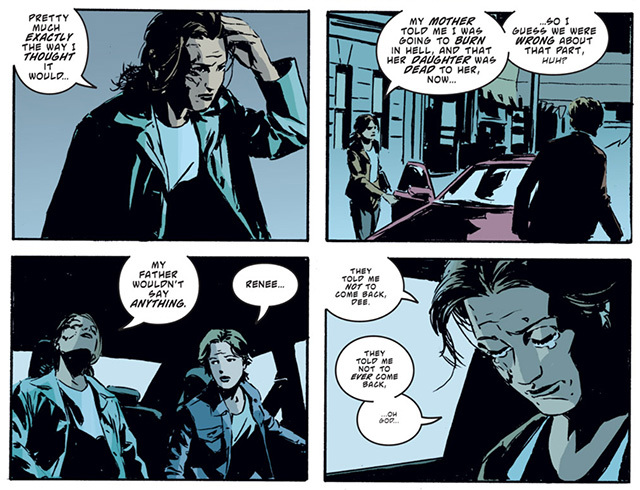 Half a Life ultimately owes a great deal to the artistic abilities of illustrator Michael Lark as well. Lark’s rough pencils and deep shadows reinforce not just the grit and grime of Gotham City, but also perfectly reflect the emotional tenuousness behind Montoya’s experience. She is a hard woman at her face, but builds that exterior on a shaky foundation, all the more represented by Lark’s sketched quality of line. Montoya’s range of emotion expressed through Lark’s pencils is nothing short of fantastic, as he takes the reader through every reaction the detective has — stoic or otherwise.

Combined with Rucka’s trademark care for his deeply conflicted heroine, the story of Renee Montoya’s coming out stands as one of the most brutally honest, and deeply realized, reflections of the reality of LGBT life in America, even today. Times may have changed, politics are evolving, but the closet — that straightjacket of half-lies — still has a power deeply rooted in a fear and anger that won’t go away in a matter of decades. Thankfully, stories like this one have an inherent power as well, owing to the deep sense of reverence their creators have for their subject matter. As a result, for many readers gay and straight alike, it’s hard to imagine it gets better than this.

This article was originally written for and published online by the Idler Magazine, January 2013.