Doctor Who writer Cavan Scott was kind enough to provide Comicosity with a list of his personal favourite Doctor Who comics. It’s a list of the best of the best featuring one story for each of the Doctors. Thank you to Cavan for compiling this! -EiC Aaron

My Favourite Doctor Who Comics 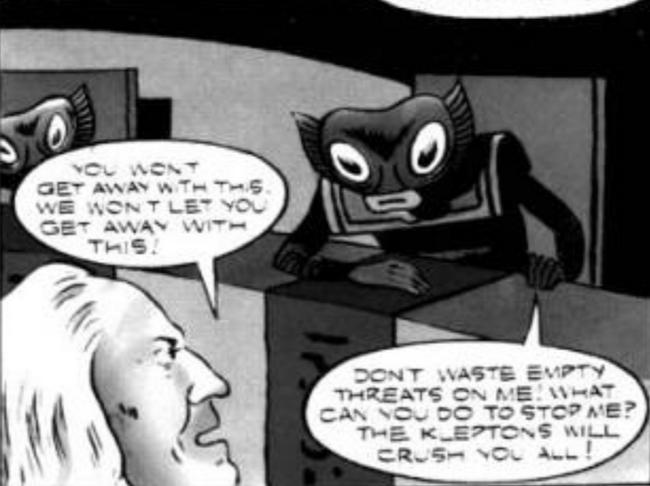 First Doctor – The Klepton Paradise
From TV Comic 673-683
The first ever Doctor Who comic and the best of the First Doctor’s run of strips in TV Comic. OK, so they were all pretty bad, but this is full of childish non-canonical charm, from the laughable Kleptons to the Doctor’s other grandchildren, John and Gillian. Oh, and a TARDIS that spins like a top when it dematerialises. No Vworps yet, though! 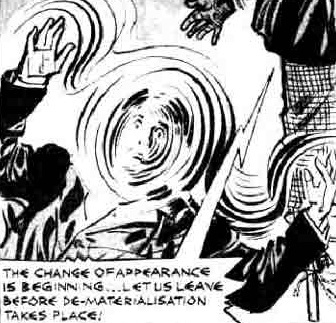 Second Doctor – The Night Walkers
From TV Comic 934-936
In the bizarre world of TV Comic, the Second Doctor has been exiled to Earth by the Time Lords and is, er, taking part in a TV game show! All a bit mad – and that’s before Time Lord-serving scarecrows slaves turn up to force the Doctor to regenerate just in time for Spearhead in Space. Bonkers, but fun.

Third Doctor – Timebenders
From Countdown 6-13
If you can ignore the cod foreign accents (this was the 1970s, after all), Timebenders is an exciting little adventure that sees the Third Doctor dragged back to the Second World War – a period that the TV series wouldn’t visit for many, many years. Best of all, Harry Lindfield’s art is beautifully stylised, a great example of the British adventure strips of the time. 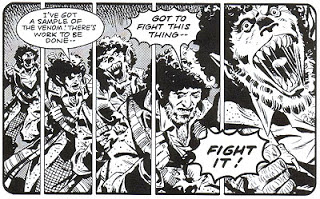 Fourth Doctor – Doctor Who and The Dogs of Doom
From Doctor Who Weekly 27-34 (1980)
It was a toss up between this and the Star Beast, but The Dogs of Doom won out for pure nostalgia. With a script by Pat Mills and art by Dave Gibbons, this had everything my eight-year-old monster-loving heart desired. Werewolves, tentacled beasts, K9 and the Daleks! Sold! 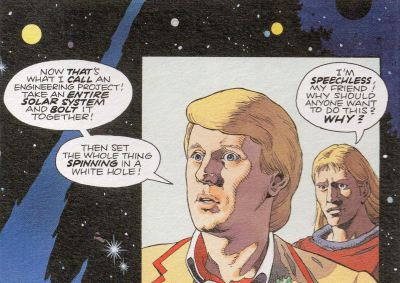 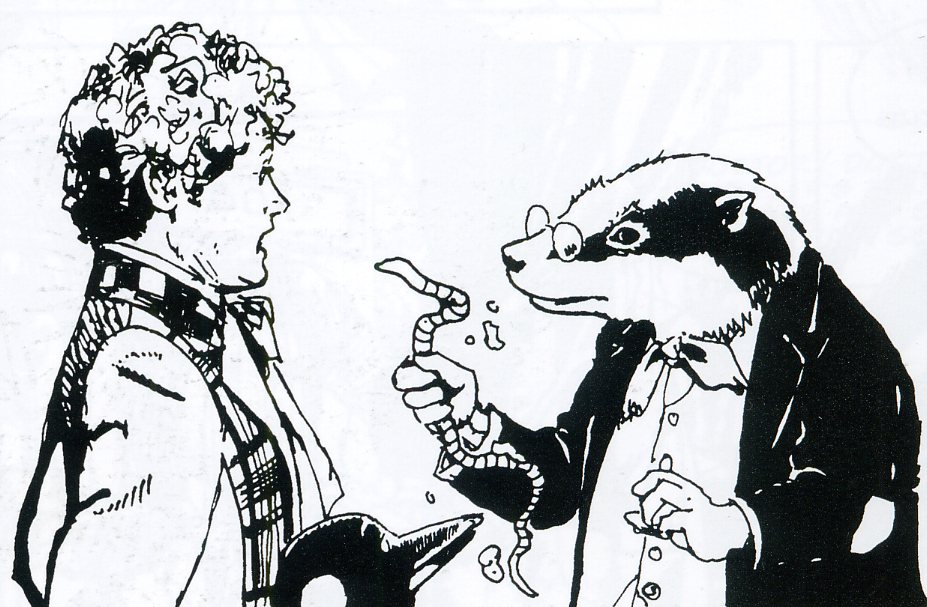 Sixth Doctor – Once Upon a Time Lord
From Doctor Who Magazine 98-99
I adored the Sixth Doctor’s comic era. John Ridgway’s scratchy but detailed art, huge set pieces that would have blown the TV show’s budget apart and, of course, a shape-shifting penguin as the Doctor’s companion.

This two-parter not only wrapped up the epic Voyager storyline, but played with the narrative, with characters running between pages and suddenly becoming a Rupert the Bear-type comic complete with rhyming couplets. 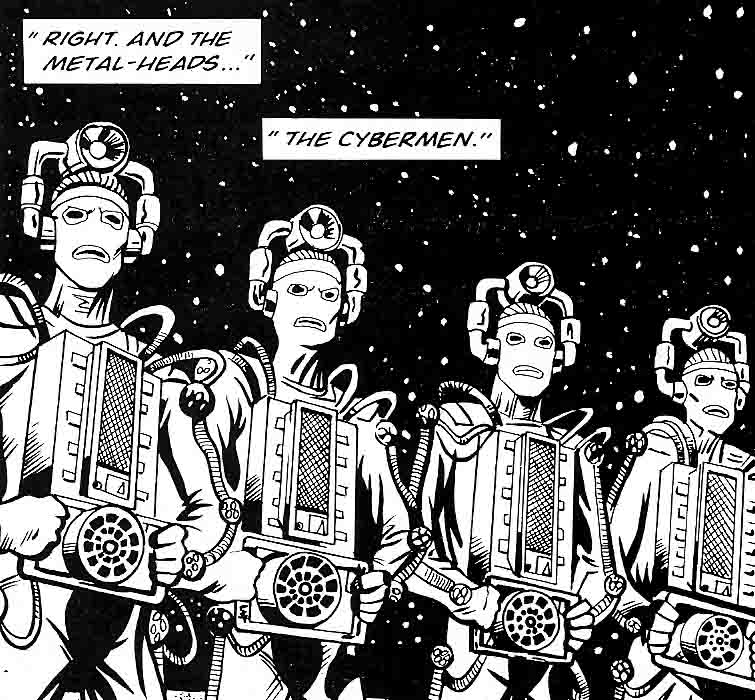 Seventh Doctor – The Good Soldier
From Doctor Who Magazine 175 – 178 (1991)
Doctor Who had been banished from our TV screens and Virgin’s series of New Adventure books had yet to materialise. Meanwhile, the comic strip was building in confidence. The show’s former script editor Andrew Cartmel provided this dark story of original cloth-faced Cybermen while Mike Collins brought the surprising amount of body-horror and gore to vivid life. Plus, the Doctor managed to transform the TARDIS into a 1950s Cadillac for one story! 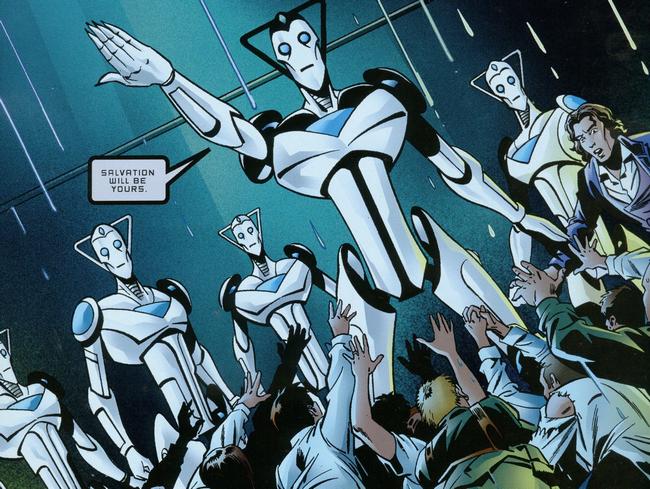 Eighth Doctor – The Flood
From Doctor Who Magazine 346-353
Yes, yes, it’s more Cybermen, but this could be one of the best Cybermen story in any media. The conclusion of the Eighth Doctor’s DWM reign, this features a radical redesign of both the metal menaces and their methods of cybernisation. Written by Scott Gray and with amazing art by Martin Geraghty, David A. Roach and Adrian Salmon, this is one to seek out. Oh, and continuity fans – it was originally supposed to end with the Eighth Doctor regenerating into the Ninth! 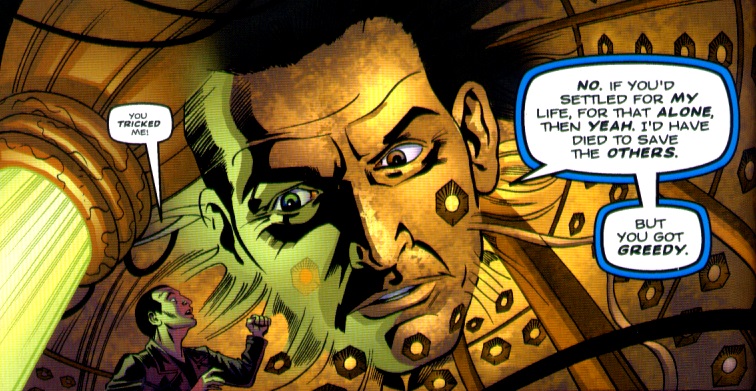 The Ninth Doctor – The Cruel Seas
From Doctor Who Magazine 359 – 362 (2005)
Dalek writer Rob Shearman conjures up a terrifying tale of revenge and living water on Mars. Artist Mike Collins goes to town with nightmarish, surreal imagery, producing some of the best artwork of his career. I went back and re-read this one before writing the script Titan’s current Ninth Doctor mini-series.

The Eleventh Doctor – Space in Dimension Relative and Time
From Doctor Who: The Eleventh Doctor 6
Oh Rob Williams, you are a very clever man. Telling a timey-wimey story that starts at the end and finishes at the beginning. Plus, of course, throwing in David Bowie as a companion (well, as near as dammit) and the return of the Nimon. If only it had also included the 11th Doctor’s pimped-up super-truck Bessie – but you can’t have everything. 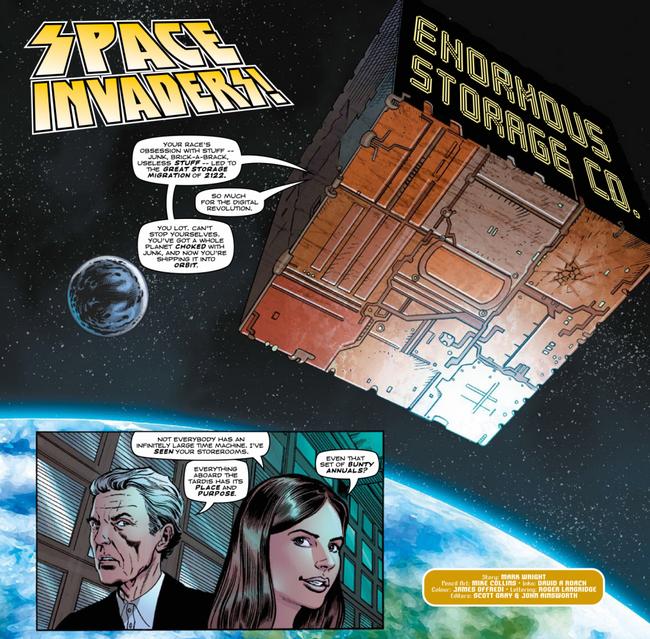 Twelfth Doctor – Space Invaders
From Doctor Who Magazine 484
OK, fair disclosure, this is by Mark Wright, one of my best buddies, but it’s fun, fun, fun. Doctor Who meets Storage Hunters in space, with loads of monsters and aliens. Mike Collins obviously has fun bringing the wacky world of Enormous Storage Co. to life to. Plus, we find out that the Doctor is a fan of classic British comic anthology, The Bunty. See, the Doctor loves comics too!

Cavan Scott is the writer of Doctor Who: The Ninth Doctor for Titan Comics. Issue Two is out June 17. You can find Cavan at cavanscott.com or on Twitter @cavanscott.