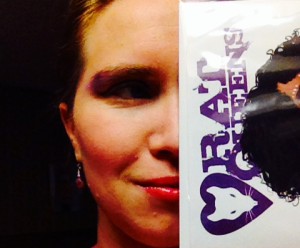 It’s not secret I was not the biggest fan of Rat Queens when the first issue hit last fall. Don’t get me wrong, it was funny. I laughed. I recognized how so many other people would enjoy it, however I chalked it up to: It’s just not for me. I also tried to stay as quiet about it as possible and move on with my comic life.

I love fantasy books, so it should have been right up my alley. Why didn’t I like it? I couldn’t put my finger on it. I thought something was off. Since people are allowed to have their own opinions I didn’t think too hard about it.

However, being involved with comic media I was surrounded by the cries of people proclaiming their love for Rat Queens. I continued to skim the book, waiting for lightning to strike. It would take a conversation, with one of the few people in my town I talk to about comics, before I’d recognize what the issue was for me.

“Are you reading Rat Queens?” I asked him.

When then proceeded to have a 5 minute conversation about why he liked the book so much: diverse cast, individual personality types, action, snark, the list kept going, “It really hits it’s stride by issue four. You need to give it another try.” Once again he emphasized the fact that it was nice to have such a strong female group of adventures to read about in comics.

Light bulb moment for me, “I think I just figured out my problem! They are a strong group of female characters… and, it shouldn’t matter, but it bothers me they were created by men.” I started to feel sick. Female creators and artists are telling fabulous stories and need the exposure. I wanted to see a group like this written in comics, but I wanted a girl’s name on the masthead instead of a mans. How messed up is that? Should I be punishing the creators for being creative and making something people enjoy? I had my “put on your big girl pants” moment of realizing that’s not a reason to punish or dislike a book, just because it was written by men. It’s humbling really, especially when you didn’t even realize that was what your problem was going to be. If you are truly going to live in a society that treats each other equally it has to be done from both sides of the gender line.

This self-realization in hand, I went home that evening and reread every issue of Rat Queens. I focused solely on what was presented and found myself belly laughing. By the time I got to issue five I found myself gasping at the end of their troll-girlfriend siege fight. I was shocked! I was immediately tweeting about it. I was caring about the fate of the characters. There was a party scene in the issue and I realized that I was Dee, sitting in the corner with her book, praying that she makes it through the evening. While there are some subtle personality differences, no one character fits a typical stereotype. Some have stronger personality quirks than others. However, you cannot pigeon hole each one so clearly. The letters section was strewn with reader creativity and hilarity. Women and men were writing in to talk about being for these different types of RPG style characters. I was sold.

I wish there was some bigger message here about making sure your enjoying comics for what they are, trying to read things from new perspectives or analyzing your motives, first, when you feel strongly about something. Instead, all I have to say is that, Kurtis Wiebe & Roc Upchurch: I’m sorry and Rat Queens rocks!