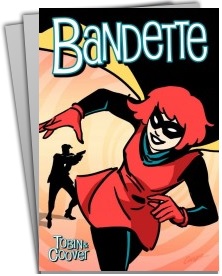 Comic Love: the place where we simply talk about the comics we love. This time around, we’re celebrating the one year anniversary of Monkeybrain Comics. The “little” company that could, and would, provide the world with great stories in digital for $0.99 a piece. Although they were set to launch of the fourth of July, they “opened” their doors digitally two days early and took the internet by storm with six titles. Now, they have four times as many books, with print collections of three of their most popular titles coming out this summer. While most companies are printing first and going digital afterward, Monkeybrain is proving their books first through people’s computers, tablets and smartphones, then determining which books people will want to hold in their hands through hardback and paper.

It’s a unique platform for creator-owned titles. Instead of having to worry about pre-orders, print runs and other potential overhead, they just have to drive the readers to ComiXology and get them to download the book. Twitter, Facebook and other social media, seemed to be the only thing needed to start spreading the word and driving up sales. Plus, when you get to interview the writers and artists of one of their titles, for over an hour, there’s going to be plenty of love for how these creators are willing to get their message out. It takes out the middle man, in the beginning. However, now with Monkeybrain collecting and selling graphic novel collections of their most popular books, they’ve come around to including and benefiting the local comic store as well.

Initially, there were three books that captured my imagination in July of 2012: Amelia Cole and the Unknown World (known now as just Amelia Cole,) The October Girl and Wander. The first dealt with a girl learning about her magical roots, losing her family and falling into an alternate, magically charged world all in an instant. DJ Kirkbride and Adam Knave have made Amelia headstrong, savvy and powerful. Throughout her adventures and into her first major event, Amelia Cole and the Hidden War, Amelia has been the leading lady that comic lovers can be proud to let their pre-teen daughters look up and aspire to be more like. The print edition of this series is hitting stores next month.

The second book, The October Girl, has had only two chapters but Matthew Dow Smith captured all the desires and insecurities many teen girls could feel in just a few panels. The stylized, monochromatic art doesn’t hurt either. Finally, Wander: Olive and the Ninth Kingdom seems to gather together every MMORPG, DnD and fantasy novel trope, roll it into a story, and add a splash of American cynicism into the mix. I don’t know why it is that I gravitated to the series that would only have two issues out, but that doesn’t mean they were not worth my time. They were fun and provided a refreshing relief that only creator owned books can give.

Those were the first titles I jumped onto. However, it wouldn’t be long before I found myself sampling Edison Rex which creates satirical comedy on the state of superheroes, while also providing an action filled story (the print edition of which came out last month, too.) Plus, many other titles such as the Eisner nominated Bandette, Masks and Mobsters and Theremin have captured attention across the internet.

For those who did not jump on the Monkeybrain train, last summer, that’s the beauty of these digital platform books: they’re always there to read. Right now Monkeybrain has bundled their first releases from last summer into a $5.99 package on ComiXology. For that price you get six titles: Bandette #1, Aesop’s Ark #1, Amelia Cole #1, Edison Rex #1, Wander #1 & Masks & Mobsters #1. It gives you a good sampling of all the different styles of titles available.

Later this month Monkeybrain has said they’re announcing new projects at Comic Con International in San Diego. I look forward to seeing what is in store for the next year in this company that is redefining the way people read creator-owned comics.