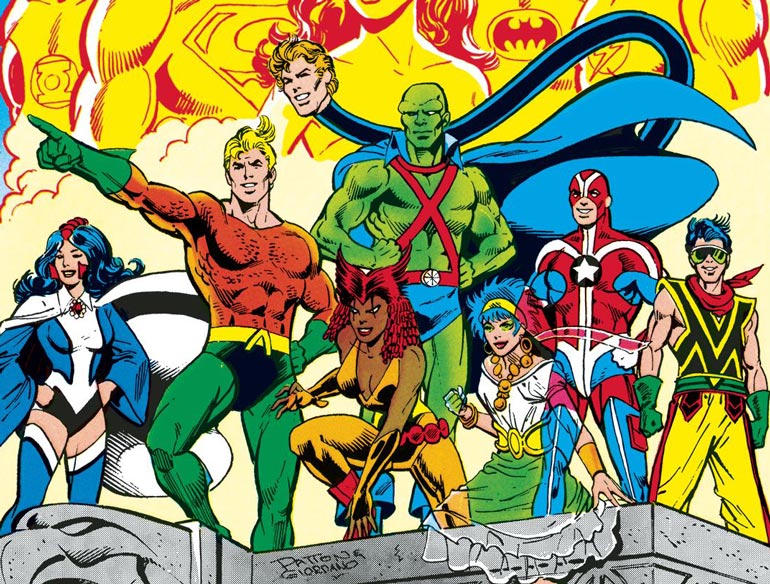 Beginnings, in life and literature, make or break a story. Writers can agonize over their first line (as I, not coincidentally, just did) to ensure the reader is hooked immediately into a world about to unfold.

Challenging, yet convenient, is the ability to rewrite, revise, and retcon your story until it is the perfect synthesis of fresh and recognizable — alluring but immediately familiar. I write fairly “stream of consciousness” myself, but as any editor I’ve worked with could tell you, I’m not above emailing them new drafts in the middle of the night alongside warnings to ignore all previous transmissions. I like to tweak. Sue me.

In life, though, we don’t always get to decide where a particular story starts. Sure, you can edit a bit in the retelling — as I am wont to do — but it all still happened the way it happened.

This may be the supreme reason why I love comic books so much, particularly those of the superhero variety. This form has evolved into a grand tradition of revision and rebirth, from their humble origins as reprinted Sunday newspaper funnies, transitory stories granted new life with just two little staples.

Nearly 80 years later, we’ve seen characters live, die, and live again (and die again, sometimes even again). Stories have been told, retold, replaced, added onto and subtracted from — all the while being read for the first time by a new audience every year. If every comic can be somebody’s first, then every story has the potential to mean something monumental to someone. 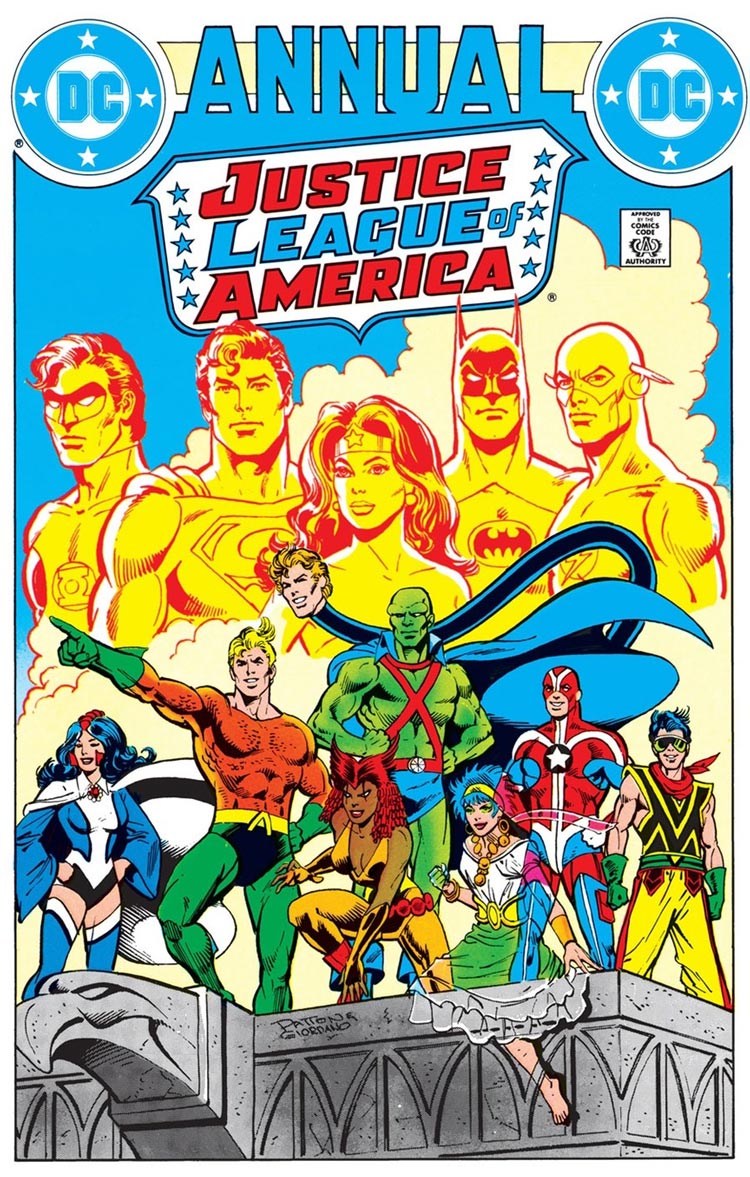 Honesty? I think that’s pretty darn cool. My first comic book was a DC Comics Justice League of America, the third part of a four-part story, given to me for my 8th birthday. It didn’t matter to me that I was dropped into the middle of the action, or what had come before.

These were, as covers often boasted, “The World’s Greatest Super-Heroes” and I was ready to go wherever they led. Batman, Green Arrow, Black Canary, Hawkman, Red Tornado, the Atom: These were literally my new heroes and I was determined to read about them and their super-colleagues forever.

Over the next few issues, the League rescued a microcosmic city from disaster, stopped civilians from being transformed into elementals, fought the skull-faced Doctor Destiny in their dreams, encountered magic lightning bolts — all as a team. I figured, if I could only get a single book, why not get the one with all the greatest heroes? That was my guarantee to see all of them in one place, every month, forever.

Funny thing, though. A couple of months after my first issue, Batman quit the League to form his own team, who would fight battles his more straight-laced friends refused. Then the Atom disappeared into the jungle. Green Lantern went into space and couldn’t commute back and forth on the weekends that easily, I guess. The Flash went on trial for murder, of all things. The team was slowly breaking apart.

I’m not sure I really noticed until I went to grab the latest issue from the bottom rack at the grocery store one day, and there were all these new characters on the cover. Wait a minute. What’s going on here? I flipped to the inside spread and read:

— The End of the Justice League!

This may seem trite today, but back in 1984, this was BIG. There had never been a panel, to my knowledge then or now, that announced the disbanding of something I imagined would never end. Disbanded? The Justice League? Are you sure? 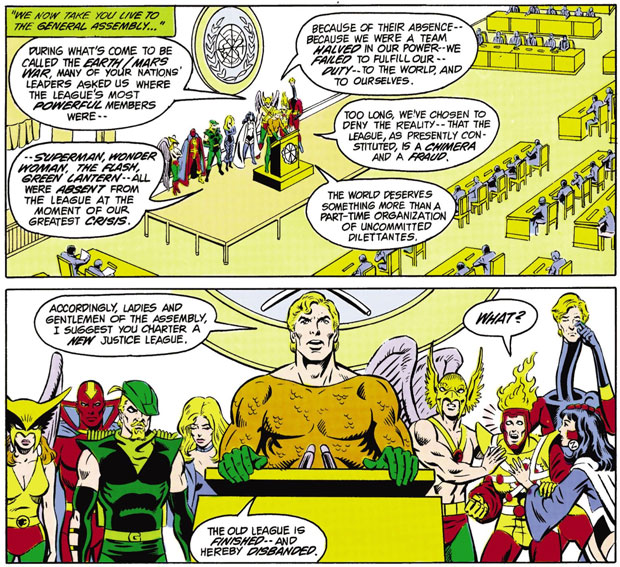 I like to imagine myself in that moment: little 9 year-old me, face agape just like old flame-head here, looking around the grocery store for someone to tell me it isn’t true. Suffice to say, I read that book that day like some Jewish kids study Torah.

Line by line, panel by panel, I dissected this story for every inch of hidden meaning and inflection I could find. To this day, after two decades of art school and internet research, I can still remember every brushstroke of Justice League of America Annual #2, as if it was the subject of my master’s thesis. Burned into my brain as no other art that came before or after, I ultimately needed to replace it with another copy that had not been read to tatters.

This extra-length tale, told by continuing creative team Gerry Conway and Chuck Patton, of course ends in a new League being formed from the ashes of the old. But new was definitely the operative word. Aquaman, never much the leader in almost 25 years of storytelling, took control, asking for full-time commitments from his colleagues.

Few accepted his — frankly — pretty demanding offer, and none of them were what we consider the “big names.” He got a Martian, a magician and a stretchable sleuth. A lesser hero might have given up there. Soon enough, as is common enough in comic books, other candidates started to appear and they were a revelation to my young eyes! 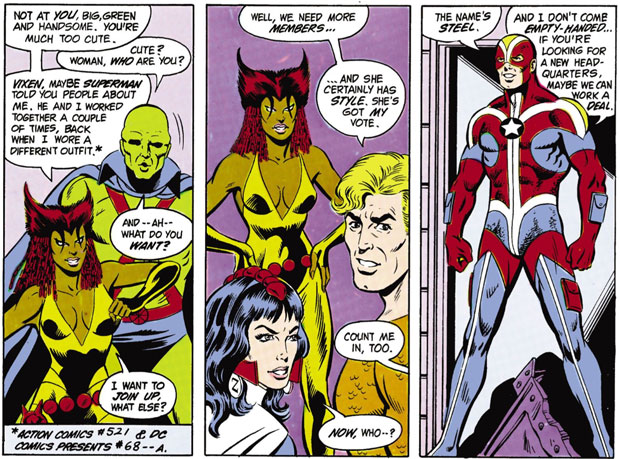 Vixen was one of DC’s first Black super-heroines, having been created by Conway for a Superman tale just three years prior. Granted the power to mimic the abilities of animals by her mysterious Tantu Totem, Vixen was a desperately-needed breath of fresh air for a team that was both overwhelming Caucasian (Martian Manhunter aside) and traditionally just a wee bit sexist when it came to the lady heroes. She was a bit sassy, often ferocious, and lent a great deal of power to a team that suddenly felt a little lopsided.

Steel too was an earlier Conway creation, but now the grandson of a star-spangled character he wrote in the self-titled 1978 series. This 19 year-old, retrofitted with internal mechanics that imbued superhuman strength and invulnerability, was brash and inexperienced, but excellent contrast to the more traditionally-minded Aquaman.

However, when it came to game-changers, Steel paled in comparison to the last hero who would formally join in this issue: the also 19 year-old, but much more controversial, Puerto Rican character Vibe. 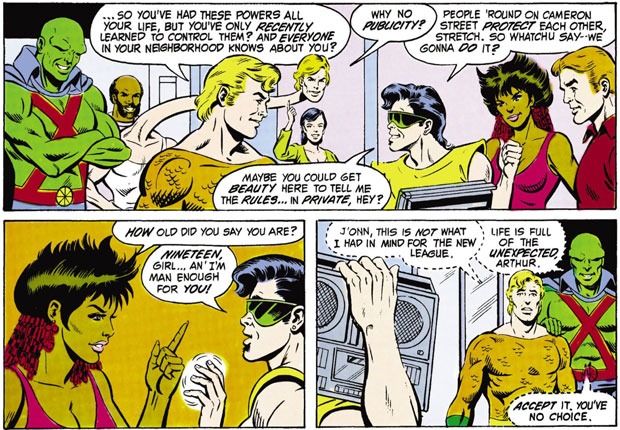 Relocated to Steel’s secret headquarters in Detroit (a city whose name famously appends this version of the League), the team is quickly joined by the questionably stereotypical Paco Ramone: retired gang member, graffiti artist and break-dancer. Named, I’m sure, for the dual purpose of expositing his vibratory power and giving him an “urban edge,” Vibe was unfortunately the flip side of Vixen — an attempt at ethnic inclusion gone wrong.

That said, my pre-pubescent head didn’t realize how crass some of the subsequent portrayals were, as much it was just new and different. And it excited me.

Years later, I’ve read thousands of stories, but I like to think the tolerance for change in my heroes — for the new and different — comes from this formative tale. Vibe was no substitute for Batman, but he contributed to a book where literally anything could happen month after month.

I still want that in comics, probably more than in my real life honestly. Here I’ll take new beginnings over endless certainty any day.

This article was originally written for and published online by the Idler Magazine, May 2012.