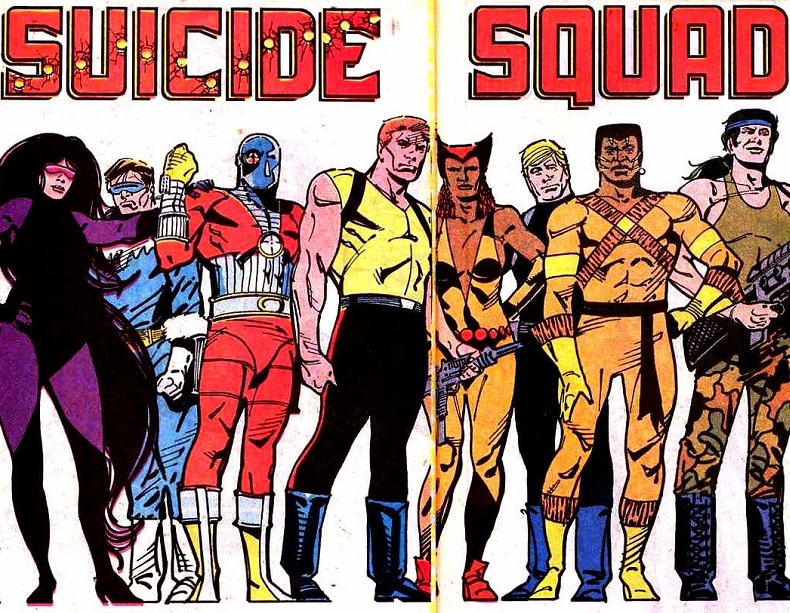 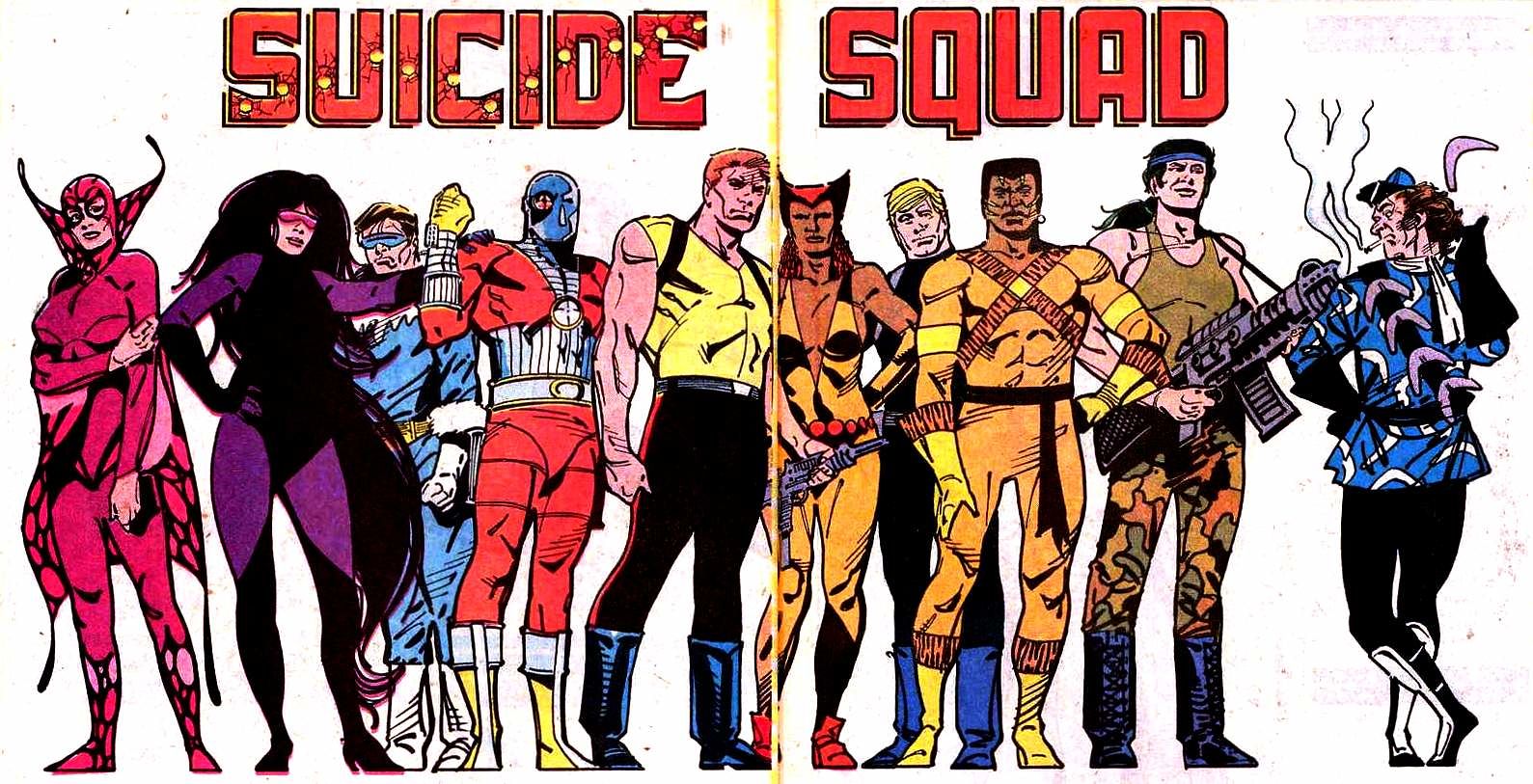 This weekend is Baltimore Comic Con, and one guest on their list has me more excited than literally every other con I’ve attended this year combined:

I’m a huge, huge, HUGE fan of the Suicide Squad. His run, cowritten with his wife Kim Yale and drawn by Luke McDonnell, John K Snyder III, Geof Isherwood (who will also be at BCC) and others, is my favorite series that DC Comics ever published. I read it in college, via…means that shall not be named…and I immediately wondered why NO ONE HAD EVER TOLD ME ABOUT IT BEFORE.

My journey into comics was very self-guided, based on characters I liked from the cartoons, and what I was able to find out on Wikipedia and other sites. This was the early 2000s, before Comixology, before comics twitter, before tumblr. I didn’t have a local comic shop. My Barnes & Noble had a trade section (thank you, college town). So, I was on my own. I think I found out about Suicide Squad because I really liked the Flash in the JL cartoon, and after reading several Flash comics I fell in love with the Rogues – how goofy they were but at the same time like, not to be fucked with, and also weirdly loyal to their city and each other. Suicide Squad came up because of Captain Boomerang, and then I saw the cast included Captain Cold, and then other villains I knew like Deadshot and Poison Ivy. The concept of a Dirty Dozen w/ supervillains thing was awesome to me. Then I met Amanda Waller and was pretty much done.

But why did the book strike such a chord with me? What exactly made it the apple of my eye? I mean I loved this book more than any Batman, Flash, or Wonder Woman story. Two years ago I finally started hunting for the single issues, after accidentally stumbling across a trove of them at Dallas Comic Con. I completed my collection in a year. If they ever actually bother to release all the collected editions, I’ll get those too. But why? Why did I care so much about this dysfunctional team of fuck-ups and their often less-than-savory tactics? 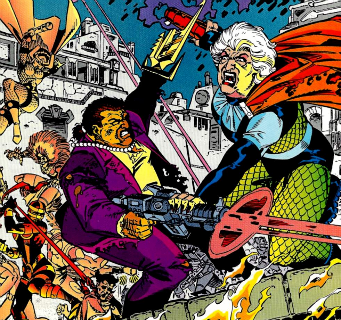 The more I’ve thought about it, the more it comes down to the sense of care and respect Ostrander and Yale ascribed to the characters, and specifically, to the women.

Amanda Waller is a big woman, like most of the women in my family. And she’s a black woman, unlike me, but she was a mover and a shaker in the fields of politics and government, which was what I wanted to be. There’s never any doubt that she’s in charge. We learn about the tragedies and hardships in her past. We see how she DOESN’T deal with a lot of it in a healthy way. We see her succeed, and fail, we see her go to prison and we see her repeatedly sass Batman TO HIS FACE without an ounce of fear. Amanda Waller is the richest, most vibrant character in that story, and never once is there some attempt to patronize or moralize. She is who she is, she is there, she is doing her job.

I could write a paragraph for every character given that sense of care, but The Wall deserves it most. She’s probably the coolest character in DC Comics, and it kills me that they’ve undone so much of what made her great in the New 52 line. Other characters I fell for: Barbara Gordon/Oracle, who I already knew from Birds of Prey books but didn’t realize got her start here; Vixen, who was trying to earn some sort of redemption, get past her survivor’s guilt, and get through to her sorta-boyfriend Bronze Tiger; Nightshade, Enchantress, LASHINA/DUCHESS, Ivy and her power play on Count Vertigo, poor Shrike and Flo, A HELICOPTER NAMED SHEBA.

The women in the story are so many colors, so many backgrounds, so many body types – the body diversity was apparently an intentional choice on the part of the writers, communicated to the artists, who execute it pretty much flawlessly. No broken spines, no balloon tits. That the primary HEROIC women are, at least to start, two black women, was something I hadn’t seen yet. The Batman comics I was used to were very, very white. That I was reading a much older book – the book is only 2 years younger than I am – and seeing that kind of diversity was blowing my mind. Hell, seeing a WOMAN listed as a WRITER blew my mind. I knew about Gail Simone, but oh man, Kim Yale just cut right into my heart. I think because these women were, by and large, not Wonder Woman-level super-powered, and they weren’t existing in positions of good will. They often had to compromise in different moral and ethical ways to get shit done, BUT THEY ALWAYS DID – I don’t know, the struggle of it all reminded me more of the women in my life. Women who try their best and still screw up sometimes, or let themselves be guided by selfish impulses. That’s not just women, obviously, that’s *people*, and the fact that these people were a mix of hero and villain and in between, well, I had to root for them, because it was like rooting for myself.

Suicide Squad also did this amazing thing where it made you care about everyone. Even the background support staff of Belle Reve prison – Johnny Economos, Father Craemer, the shrink, the pilot, etc etc – they don’t even get to stay on for the whole series, but it’s clear they all have rich lives and stories that you’d probably want to hear about. 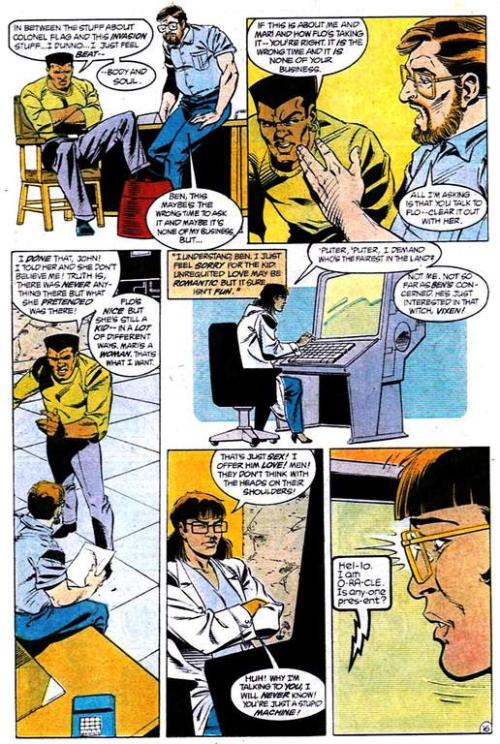 It also made me care about assholes like Captain Boomerang. I love him. Unironically. He appeared all of twice in the JLU cartoon, and stole the show both damn times – ESPECIALLY in the Task Force X/Suicide Squad episode. I maintain a Suicide Squad cartoon based on that episode alone could totally air on [adult swim] or something and be amazing. Captain Boomerang. Total dirtbag. And yet, I cared. I secretly rooted for him to survive. I loved his team ups with Deadshot, and the time he beat the shit out of the Thinker, and the time he dressed up as (I AM NOT SPOILING THIS FOR YOU BUT IF YOU’VE READ IT YOU REMEMBER), and that issue where he goes home for his mom’s funeral broke my damn heart. He’s irredeemable, and he’s a stupid Silver Age holdover…and they made him matter, gave him a purpose, gave him an arc. I love that he repeatedly chooses to continue being a bastard, and that he proves himself kind of a savant for espionage and high risk missions. I also love the characters who do actually try to grow and change – Ben Turner, Floyd Lawton, Werner Vertigo. June Moon and Eve Eden and Amanda herself. 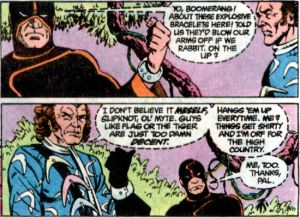 I cared so deeply about these fucked-up people, as they struggled just to become slightly less fucked-up, or like Boomerang, had mastered the art of self love in the face of impossible odds (that’s sarcasm, he’s a piece of shit) (BUT HE IS MY PIECE OF SHIT). Layer on top of all that amazing human story the interconnected continuity of the recently rebooted DCU, and the political and social themes of the late stages of the Cold War, and the result was something completely unlike anything else I had ever read, and haven’t read since.

There’s something dark and sly and a little bit macabre about the series as a whole – I mean you do legitimately have to root for people who are actual murderers, against other more organized murderers threatening American political interests, even when those interests are maybe questionable? – but it has its own cautious optimism for the future. DC reintroduced the team for the New 52, but none of the characters had the same charm or depth, and the stakes felt artificial. Basically, it misses all of the marks of its predecessor. 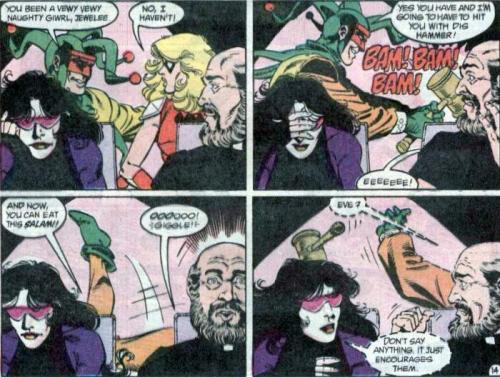 But then, I don’t think any version of the team ever could meet that bar. It was never just a story about dangerous or illegal missions; it was a story about teammates dating and breaking up, and some jerk hitting everyone in the face with pies, and Batgirl finding a new life after Alan Moore saw fit to throw it away.

It’s a story about rich, dirty, weird, awful, beautiful people, thrown together because of their own choices, and forced to eke out the best sort of life they can.

I should probably come up with a bullet point version of this to actually say to Ostrander at his table instead of crying on him.