Comic Love: the place where we simply talk about the comics we love. This time around, I’ll be discussing the glory that is The Marvels Project by Ed Brubaker and Steve Epting (the duo who worked on the absolutely fabulous Captain America run that I hold near and dear to my heart). 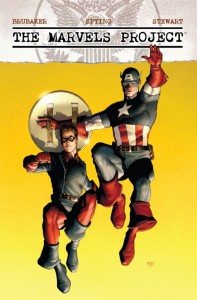 There reason I chose to discuss this book is simple: it is amazing and not enough people have read it. When speaking with some Twitter pals who I was sure would have read this, as it would be right in their wheelhouse, I was shocked to find that I was the only person of my crew to have read this collection. I will say this right now before I get too deep into talking about the book: if you liked Brubaker/Epting on Captain America, and like Marvels, read this collection! Run to your store, order it online, whatever you have to do, read it!

Brubaker is totally in his element with this series. It focuses on the birth of the Marvel Universe, the very first heroes and the rise of heroes with World War II and the emergence of The Human Torch, Captain America, Namor, John Steele, & Nick Fury, among others. He does a fantastic job of giving each character their due time and focusing on who they are in this period of time. You can see from the foundations of these characters how they evolve to become who they currently are in the Marvel Universe. As he excelled at during his run on Captain America, Brubaker is able to zero in on singular defining moments in these character’s lives and execute them with precision. For example, I’ve never given a damn about the original Human Torch. Dude was an android, I knew that, and he could flame on and helped out Cap during WWII. That was what I knew, all I cared to know, and then Brubaker changed all that with this series. This Torch is relatable: a man on a quest to become human. He desperately wants to be a part of society, to shed his monster image and help others. We see the moments that make this character who he is, and why he is part of the bedrock of everything Marvel. Brubaker brings a new light to these first heroes with an attention to detail that many writers lack, and he fleshes out the core of these characters. These are the most noble of heroes, fighting ‘the good fight’ because it needs to be fought, with each playing a huge part in the history of Marvel Comics. These are characters all Marvel fans should know, and his voice for each is so very spot on it is really like these characters are of his own invention, and this is their first appearance in comics. This is like reading the “big bang” of Marvel, but with a skilled execution and current storytelling style that just didn’t exist when the first stories of these characters were being told. Some parts are a retelling, yes, but Brubaker does a great job of telling those tales from a different angle, a different voice than we’ve ever read before. This makes each situation unique and new again…and in many ways better than the first time I’d read some of them.

Reading this book as a collection, the pacing is brilliant. This is not the fastest read, by any means, but it has a fantastic structure to it. The collection is constantly building upon itself, with the levels of tension constantly rising the further you get into the tome. This would have been an infuriating read for someone like myself had I read it as a monthly, but reading it in a single book is absolute perfection. I don’t mind a slow-burn of a story as long as it comes to a satisfying conclusion, and this comic does that and more. Much like Marvels, it is an investigation of superheroes and their role in comics, but Brubaker adds a lot more of a storyline to this series. Rather than following a single reporter, we follow an original hero, and many heroes, in fact, driving the story forward from the minds of many rather than the eyes of just one. In my opinion, this allowed me to gain a much greater insight into individuals and why they were doing what they were at any given time. Marvels is great, don’t get me wrong, but I was ecstatic that this was not just Marvels 2.0, and was its own beast, regardless of the similar title. 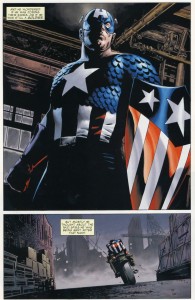 Alright…enough about the story: let’s talk about art. Steve Epting blows the roof off of this book (I do not apologize for my descriptions making absolutely no sense…it’s part of who I am). The art in this collection is on par with what we’ve seen in Marvels and every other book of that caliber, and Epting should be applauded for some of the pages in this collection. There are points where Brubaker needs nothing short of epic art and Epting delivers easily. You want to see the most menacing wave ever? You’ve got it here. There are dozens – DOZENS – of panels in this book that give me chills, something that has only happened in a handful of comics ever. Epting’s art in this collection is some of the best he has ever created, and I would argue even better than his time on Captain America. He nails the “feel” of these first heroes: that this is an uncharted world, and that the characters themselves aren’t even sure what the hell they are up to at times, but damned if they aren’t jumping in head first. That bravado and lust for life, lust for freedom in many cases, jumps off the page and sucks me deep into the story each time I read it. The art is as impressive as Brubaker’s writing, and this book makes me crave more work from this pair. If Brubaker is shifting into the realm of creator owned, I would love for Epting to follow him for a short period, even just a mini-series, so that I can see more of what this pair is capable of when working together. This is one of those projects where the creative battery are completely in ‘the zone’ together and firing on all cylinders. The visuals are astounding from start to finish and compliment the script brilliantly and this collection is part of why Steve Epting is permanently locked in my top 5 artists of all time.

So…if you’ve read this far I think you’ve pretty much figured out I loved this book. This is one of my ‘yearly reads’, and I look forward to reading it for many years to come. If you haven’t read this series, I heartily recommend it, especially if you enjoyed this team working on Cap. This is some of their best work, and that is saying a lot….

Check Comicosity regularly for more Comic Love, and let me know what you thought about The Marvels Project in the comments section!