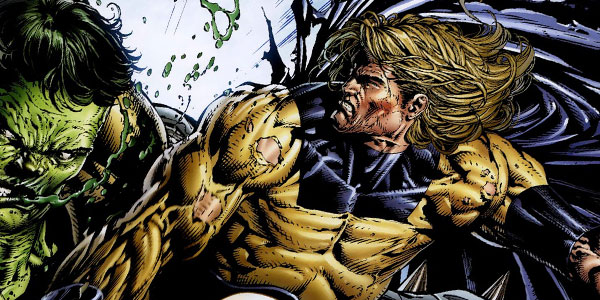 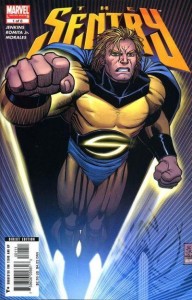 He is Us: Love For The Sentry

Jonathan Hickman is working some marvelous magic with the new Marvel lineup of Avengers books. I was excited to pick up both of those titles as the Avengers mythos expands with his very capable imagination. New Avengers is basically a continuation of the Illuminati and their exploits. The first issue was a gorgeous foray into the Wakandan wild and cosmic potentials, care of Hickman and Opena. In Avengers, we’re promised an expanding and rotating roster of heroes from all over the Marvel Universe, and five issues in I’m left wondering about where one of my favorite characters fits into it all. I’m talking about The Sentry.

Yeah, that guy. I know what you think, as your opinions have been made it quite clear with the constant roasting. I even came across an article on another website that pokes fun at Bob for “running away and crying”. The distaste for The Sentry largely comes from the fact that either he’s conflicted or that he’s dependent on a substance for his powers. The Sentry requires the use of a drug to get his powers of “One Million Exploding Suns” with which to vanquish the Void — actually the dark parts of himself. Sentry is a flawed character, unsure of what his abilities are and fearful of what he could do and the mistakes he can make.

Instead of the Sentry, we get Hyperion as sort of the Marvel Superman archetype. With issue 4 of The Avengers we get an even more one-sided character who is all muscle and responsibility. Flat and predictable. Completely unrealistic.

Don’t walk away! Let me explain why this is first and then you can decide to ignore my claims and carry on reading muscle-bound douche bags. The thing that makes Sentry so great is that he is us. We humans are constantly cursed with great potential and great power but the thing holding most of us back is fear of what we could do or a fear of the unknown that involves us. Although we have this great potential, we also carry this burden of self-doubt. All of us have the power to change the world, but none of the confidence to do it. This is Bob Reynolds. 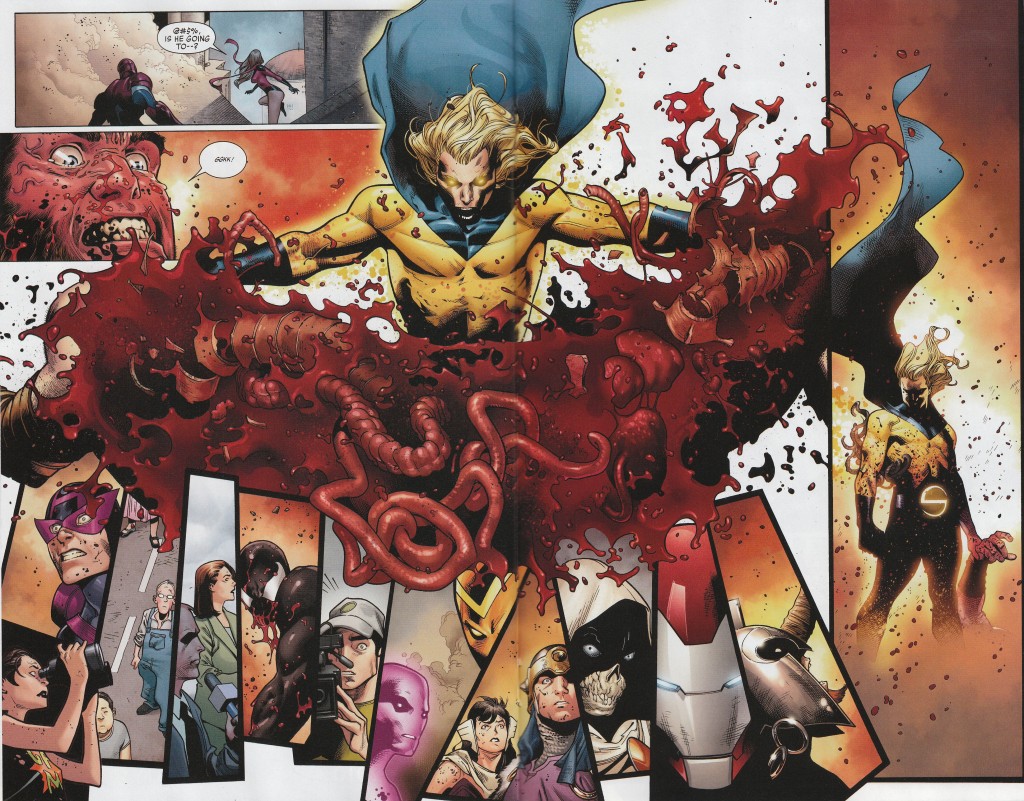 There are those of us who carry this burden more than others. The self doubt is so crushing that one must self medicate to even be able to handle this burden. This is The Sentry. His serum is necessary for him to face his fears. Yes, he is flawed, but flawed in an incredibly realistic sense. Just as Peter Parker struggles with power and responsibility and Bruce Banner struggles to conquer the beast within, The Sentry is forced into a relationship with the very thing he fears and the thing he fears is more personal than heights or some colorful foe. The thing he fears is himself.

The Void takes this metaphor even deeper as it is the manifestation of Bob’s dark side. In honesty, the Void is The Sentry. And just as all of us are flawed and personify contradictory traits, so does Bob Reynolds. Bob is not a perfect character and his powers and reactions remind you of this fact. This has been the standard that has been kept for many of Marvel’s characters. They’re more like us so in so many ways and that’s part of the appeal.

The history of The Sentry is full of some fine moments and it brings to mind a message from Neal Peart of Rush; “In The Shakiest Wheel There’s a Core of Steel”. In the events of World War Hulk where Bob refuses to be a lapdog for Tony Stark and company we see that core of steel. Like so many of us, we know that a shaky voice is not a sign of weakness but a cover for a resolve so strong it could take on forces bigger and badder than ourselves. Jenkins, Veitch, and Lee tapped into this so well with The Sentry that whenever the Sentry overcomes himself you can’t help but cheer this tragic hero.

You can find Gord Cummings on Twitter at @gordwcummings or via email at gordwcummings@gmail.com.