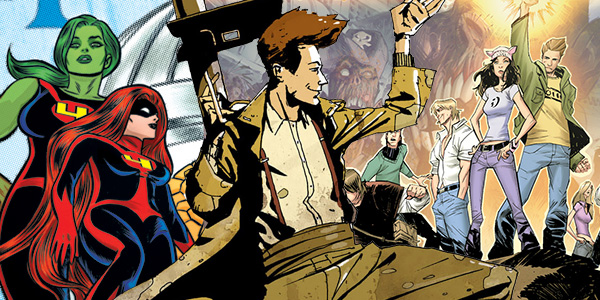 Comic Love is the place where we talk about all the books we love, so what better thing to do than talk about the favourite titles of the Comicosity staff? Our staff has banded together to lay it all out there: our top five books each month and the shining title that sits on the top that we can’t live without. Now, without further ado, it is my pleasure to present the top comics of the Comicosity staff: 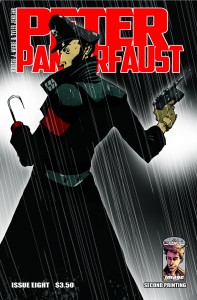 Top of the pile: Every issue of Peter Panzerfaust is a joy for me. Panzerfaust is a retelling of Peter Pan by way of Band of Brothers. Placing Peter as a leader of a resistance team during World War II. As well as providing action, poignant characterization and heart-felt moments, Panzerfaust shows a version of war not often seen in comics. Gone are the costumed heroes jumping into the line of fire. Instead we follow boys as they become men, drawn into the conflict they so desperately wanted to escape. Canadian comic creators tell of the heroism of regular people, even the French! (find me an American war comic that would have the courage of such honesty). I have purchased every issue digitally and in print, have recommended it to everyone who will listen, and have gifted digital issues and trades. 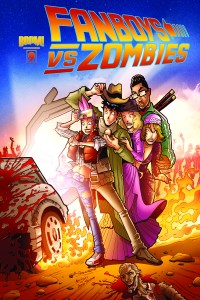 Top of the pile: It’s the book that never fails to make me laugh, and leave me shocked by the end of each arc: Fanboys vs. Zombies. This book, created by Sam Humphries, was one of those things I put off reading for awhile, because I had only ever attended one convention (at that point in my life) and assumed it wasn’t something that could speak much to me. How wrong I was. The series has moved from being convention fun-poking centric to spoofing all of nerd culture that abounds. Add in a dose of zombies, characters that poke at archetypes as well as real-life famous nerds and massive amounts of action each month and you have a recipe for a zombie-good time. In just over a year, this series has has it’s characters travel across the country and into the reaches of space. And the character that kicks the most butt is the little sister who started off the series as just another side-character, Amanda, took on a life of her own, being the most fearless one of them all. Having Jerry Gaylord’s cartoon fun-time art style, over exaggerating the blood and guts put into this book doesn’t hurt either. This is what comics are meant to be, fun and entertaining.

Top of the pile: Despite the fact that it was announced as a mini-series, Five Weapons by Jimmie Robinson was the first comic I wanted to read over the last 5 months. The last issue sported a tease suggesting it will be returning, and my wishes came true when it was announced as an ongoing series. The only reason for despair is that I have to wait until January to read it again. Perhaps I will have to dig up Bomb Queen to tide me over until then. Five Weapons is the story of a young Tyler Shainline going to assassin’s school, where there are five “sororities” based around different weapons. The reason this book is on the top of my pile is the characterization; I just can’t get enough of the characters in the book, and even though the situations are so surreal, the characters really ground the book in reality. Doing double duty, Jimmie Robinson’s art is the perfect complement to the story, not overly detailed but truly expressive. It is an impressive feat to climb to the top of my pile every month, but the best part about this series is that it gets me excited to read it… it brings me back to my younger days as a comic fan, and I love that.

Top of the Pile: The number one thing I look for in comic books is joy, and Young Avengers delivers that in spades. I only started reading Marvel books in 2013, but I devoured Gillen’s Journey Into Mystery run just in time for the relaunch. Despite knowing nothing about any of the characters (save Loki), it’s my happy place. His talent for conveying so much with so little (be it dialogue or action) is set off perfectly by McKelvie’s vibrant, unique layouts and incredibly expressive faces. The colors pop, the action explodes off the page, and there is no such thing as a meaningless detail. The book makes me laugh, makes me care, and makes me cry. From the Tumblr recap page to Noh-Varr’s Kirby engines (powered by imagination!!) the book compels me to smile. I also share Loki’s love of breakfast meats.

Top of the pile: My reading list is in a bit of a transition, and this question would have had a solid answer six months ago, but the Bat titles have been a bit adrift since “Death of the Family” and the death of Damian Wayne, and Wonder Woman seems to have lost a bit of the unpredictable inventiveness that marked its relaunch. Ask me again in a few months, and it’s possible that Jupiter’s Legacy, Lazarus, or The Wake might swoop in to take the top spot. I might get pulled in to Scott Snyder’s “Year Zero,” or Tomasi and Gleason might return to form. For right now, however, Matt Fraction and Michael Allred’s colorful, zany, yet intensely personal FF is the title that most consistently surprises and delights me. It’s like reading a pop art painting. Everything is on the surface in exaggerated color, which is the perfect way to tell the story of a group of second stringers holding each other up as an accidental but intensely loyal family. An unexpected honorable mention also needs to go out to the final issues of Dial H, which has on the whole been a disappointing series, but has drawn a new sense of direction and energy from its impending end. 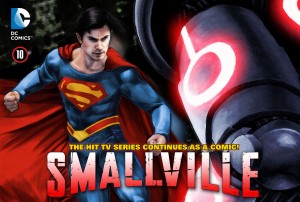 Top of the pile: Smallville: Season 11 is a digital weekly series written by Bryan Q. Miller (who was an executive story editor on the show before he became a writer for the show’s last three seasons) that is a continuation of the longest running Superman TV show Smallville. Smallville: Season 11 follows Clark Kent’s first year as the Man of Steel where he fights for truth, justice and the American way as he saves the world from both new and old foes while also being joined by new and old heroes on his adventures. Growing up with the show, this book is the one that is closest to my heart as Miller gives the readers the stories and adventures that the show, due to budget issues and other factors, couldn’t do. Miller’s way of writing the characters and the next chapters in their lives is being done majestically as I can feel the characters and their world that we saw on our television screens for ten years. Along with Miller’s amazing writing, the book has had fantastic artwork by several artists such as Cat Staggs (“Valkyrie” and has been doing all the digital covers since the first chapter), Pere Perez (“Guardian”) and Daniel HDR (“Argo”). If you loved Smallville and want more adventures of this particular incarnation of Superman, this comic is a must read. 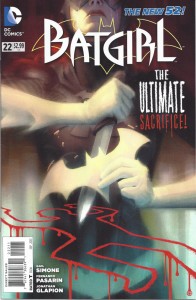 Top of the Pile: One of the things about Gail Simone’s writing, in general, that hits me so concussively is her willingness to re-imagine the comic audience from what it always has been — almost crafting it through sheer will to be a better welcome to readers from all paths of life. Her determination to represent and respect her readers, many of whom are of the type long-ignored by fandom over the years, resonates through heartfelt and thoughtful dialogue, real trauma and its effects on characters, and a clear sense of what makes a good villain tick. Roll all that up with a wickedly sick sense of humor at times, and you have a recipe for excellent reading from her recent launches of Red Sonja and The Movement, to her high profile New 52 launch Batgirl. As a return for Barbara Gordon to the cape and cowl, this title would be in the running for my favorite in any case, but what certainly seals the deal is the great care Gail Simone has taken in representing this younger Babs’ emotions and development, all the while providing a wild, sometimes creepy ride. Now, with a deepening friendship between her and roommate Alysia Yoh, a rift forming between her costumed identity and the father figures in her life — Batman and Commissioner Gordon — and in the wake of intense guilt over the presumed death of her brother, there is no better time to jump into Batgirl’s ongoing adventures. See how she balances crimefighting with an ever-growing aptitude for computer science. Hear her voice resonate as the heart of the series. And reel in surprise, as Babs does, when the rug is pulled out from under her at every turn. 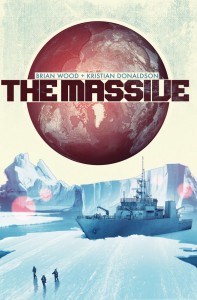 Top of the pile: The book that I read as soon as I can get my hands on it is The Massive. The Massive is a post-environmental-incident story that chronicles the experiences and actions of Ninth Wave as they search for a missing ship, The Massive. Economies, countries, and social structures have fallen, and Ninth Wave (and humanity in general) struggles to survive in this harsh new world. This title is a slow burn that will most likely read best as a full run when it is complete, but I have to have my monthly fix. Brian Wood’s world is so closely removed from our own and I find it bizarrely fascinating to see what part of the world we are going to get a glimpse of each month. The characters are compelling and mysterious, the situation is dire and dangerous, and the artwork has been fantastic since issue #1. The Massive is as epic as a comic book series can be and Wood has got me hook, line, and sinker.

And there you have it! Sound off below, and let us know what is at the top of your read pile!