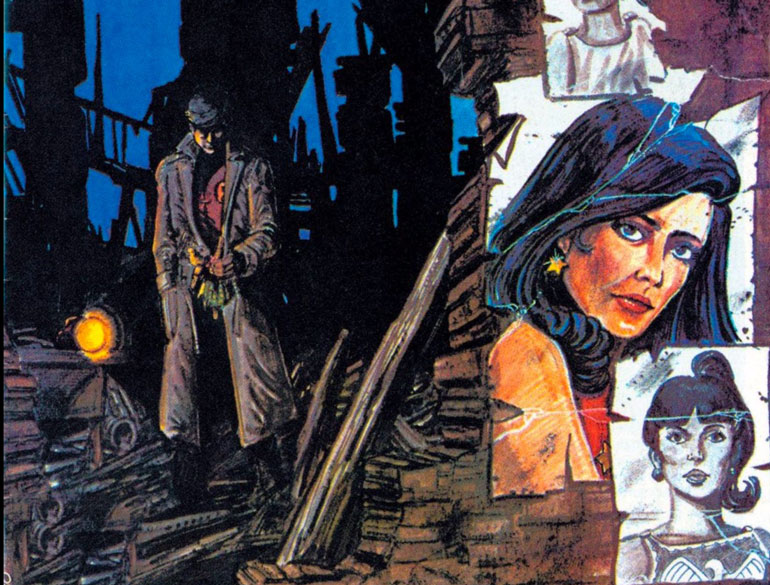 It’s probably pretty clear by now that I’ve read more than my share of comic books.

I have more than 15 thousand in my personal collection, curated carefully over the last 35 years, not to mention the thousands more I’ve read and subsequently donated to worthy causes.

I still pick up an insane number of new books each month, but can genuinely say I enjoy them all. There doesn’t seem to be much point, after everything I’ve read, to suffer bad stories anymore — especially when there are always so many good ones to be found on the monthly rack or in the back issue bin. Especially when so many talented creators are building new worlds every day across dozens of publishers.

Nonetheless, there is a single comic book that has never quite managed to be topped in my mind and heart, and with good reason. And having spent this last weekend at FlameCon, and walked away with an absolutely stunning sketch from the exceptionally talented Phil Jimenez, it comes to mind once again.

A unique treatise on the power of family, the story “Who is Donna Troy?” still resonates with me after a hundred, possibly two hundred reads, just as strongly as it did the first time I opened its pages. 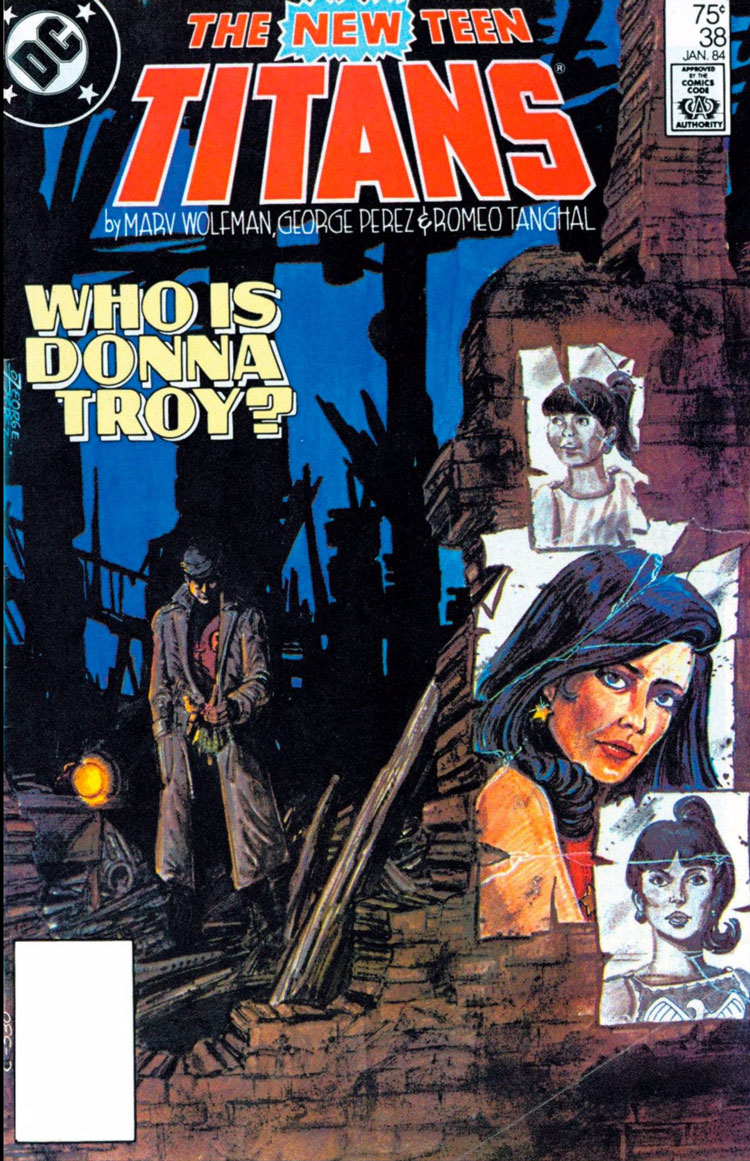 Cover (and all subsequent) art by George Perez

Originally published in DC Comics’ New Teen Titans #38 in 1984, “Who is Donna Troy?” begins as a curious play on the classic detective story. Dick Grayson, the young man known to the world as Robin, sits in a dark room that feels lifted from every noir film to feature a grizzled sleuth, just waiting for some femme fatale to stroll in the door and turn his life upside-down.

Light slides between slits of the window blinds, creating patterns against the hero’s trench coat as he sits down with his coffee to silently review his case files. Dick’s inner monologue is every bit the cliché you expect from a movie detective from the ‘30s or ‘40s, crafting himself as a solitary figure emotionally distanced from those around him.

The reality couldn’t be further from the truth, and co-plotters Marv Wolfman and George Perez know it. In actuality, Dick has grown up surrounded by family and friends, first in the spotlight of the circus, then later at Batman’s side and among his peers in the Teen Titans. As a result, Wolfman and Perez beautifully set up this brief façade — both within Dick’s physical surroundings and own thought process — to accentuate just how far from hackneyed this tale is going to tread. 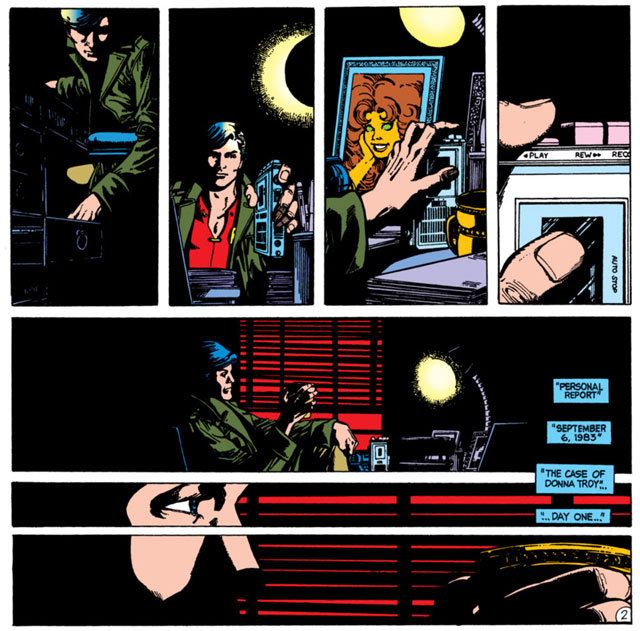 The key irony to this scene is that Donna Troy has never been a femme fatale, but rather was known for many years (perhaps in great part because of this very story) as the girl everyone wants as a best friend. Kind to a fault, equal parts warrior and compassioned ally, Donna is a super-heroic Mary Tyler Moore, whose only darkness rests in the uncertainty about her own origins.

Rescued from a tenement fire as an infant by Wonder Woman, Donna remembered nothing of her past prior to her arrival on the mythic Paradise Island. Raised as Wonder Woman’s sister by her mother Queen Hippolyte, and granted similar powers through technological means, Donna became the teenage heroine Wonder Girl and helped found the Teen Titans with Robin. Since day one, Donna had been committed to the team, coming to regard them as her own adopted family in lieu of any recollection of a birth family.

Nevertheless, now coming up on the eve of her wedding, it seems to Wonder Girl more important than ever to know where she came from and who she really is. It’s a tension a lot of adopted children experience as they grow older, but one for Donna that fortunately does not seem alien or hurtful to the family of friends she’s gathered around her. Dick Grayson, an orphan himself, perfectly understands her dilemma, and while he briefly knew and enjoyed a life with his birth parents, Donna’s need for a connection to her past resonates strongly within him.

Donna and Dick’s relationship is one of the most rare in comics, perhaps even pop culture as a whole, in that they are and always have been completely platonic, but deeply connected friends. This dynamic between a heterosexual male and female, particularly in their teens, is far more unusual than one might think.

Time and time again, television and books seem to need to address sexual attraction between every male and female lead, but here the writers consistently represent Dick and Donna as solely the closest of friends. Brother and sister in a carefully constructed family, these two are bound not by blood, but by a lifetime of shared adventures and similar loss.

It’s a much more difficult dynamic for writers to capture, as it bucks almost every tradition Western culture has tried to maintain regarding heterosexual inevitability, but Wolfman and Perez seem to instill it effortlessly, between these two characters in particular. 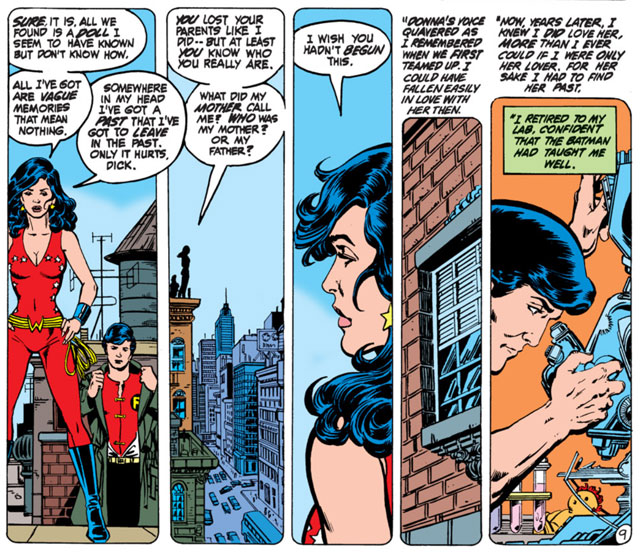 While Donna’s desire to know her past may not create familial tension with her groom-to-be or brother-in-arms, her frustration over the process of discovery does reverberate through her relationships. She may not think twice when barreling after the Fearsome Five or throwing a punch at the Terminator, but when confronted by the brick walls of her family history, Wonder Girl may have found her greatest weakness.

She does at times project the same misgivings upon Robin, however unwarranted. Ward to the world’s greatest detective, Dick is no slouch when it comes to solving mysteries. That he in fact does so in a single comic book issue is its own meta-reading of Dick Grayson’s expertise, although it also typifies an era when single plotlines were not stretched over six to nine issues of decompressed storytelling.

Inevitably, Dick strikes out on his own to find answers on Donna’s behalf, because despite her protests, he knows her heart as well as he knows his own. The family reunions, three to be exact, that Donna is graced with as a result of Dick’s love and dedication (and no small measure of pride), still create the same lump in my throat and tear-filled eyes that I had the first time I read this issue. 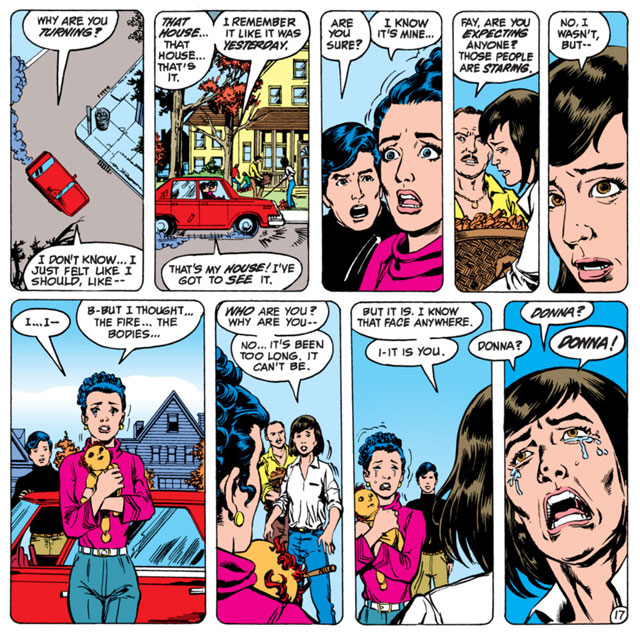 Unquestionably, Perez’s ability to capture facial emotion and body language so eloquently goes a long way toward contributing to my sentimental nature about Donna’s origin story. Every character is distinctively drawn and immediately recognizable in Perez’s New Teen Titans run, not needing to rely on costumes, clothing cues or even hairstyles to adequately differentiate Donna or Dick from other recurring family members or passers-by.

Each character is a unique person, as flawed and perfectly individual as those people we know in our day-to-day lives. I frankly can only name a handful of other artists of super-hero comics about which I could say the same, and none of which render their charges nearly as effectively.

But honestly, “Who is Donna Troy?” just isn’t your normal super-hero tale anyway. No punches are thrown. No super-villains show up to move the plot along or introduce witty banter. Indeed, the very fact that Wonder Girl and Robin put on their costumes for any part of this issue seems only in service to the series as a whole; Donna and Dick’s deductive activities certainly don’t necessitate it.

What this story excels at doing is removing all the faux action super-hero comics are usually packed with and letting honest motivations and character relationships unveil the dramatic potential of the story instead. While exploding buildings or invading hoards from outer space may often punctuate Donna’s experience of her expanded family, it is more appropriately defined by the smaller moments and revelations between them — not unlike our own.

As someone lucky enough to have both a strong connection to my family of origin and a constructed family of choice, I get to experience a lot of the joy that Donna sees in her own clan. “Who is Donna Troy?” may ultimately be the most perfect single comic book I’ve read for that reason alone, because it narrows down everything I believe to be true about family — that ties of friendship are as important as blood, that finding joy is paramount no matter what the odds, and every family deserves the right to define itself by its own best terms.

Thanks, Donna and Dick, for being shining reminders of these truths, even all these years later. It’s no wonder I still think of you as one of my best examples for how important best friends and family can be.

And thanks, Phil Jimenez, for bringing all back to me once again. 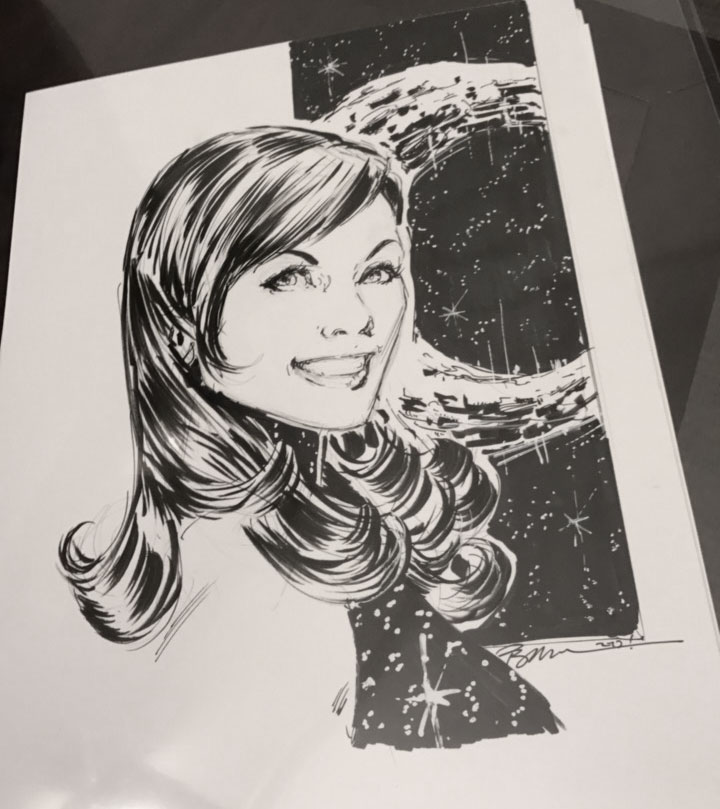 A version of this article was originally written for and published online by the Idler Magazine, November 2012.