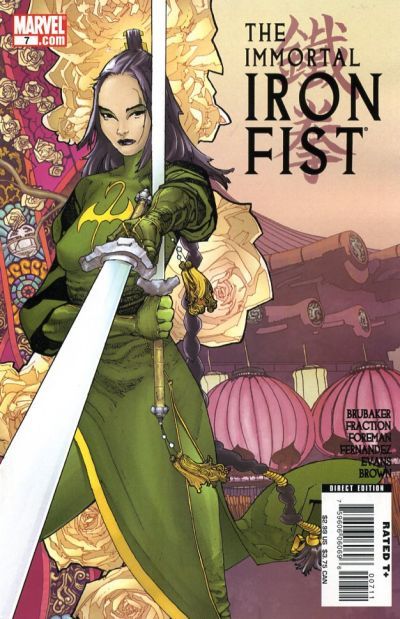 That’s right, we’re back for a second exciting week of the Comicosity Book Club, where we’re reading the second volume of Immortal Iron Fist by Matt Fraction, Ed Brubaker, David Aja, and others! This is our first Book Club where the book was recommended by you, our loyal fans, and so far I have to say it’s one of the best!

This week we were lucky enough to read issues 7-12 and the Annual 1, collected in the second trade paperback as well as the first volume of The Immortal Iron Fist: The Complete Collection. If you haven’t read it yet, we recommend you jump on so you can join us next week for volume 3 (issues 13-16 and a few extras)! Be sure to tag your favorite panels, thoughts, and more cool stuff using the hashtag #IronFistClub.

Best part of Iron Fist storyline for me is the relationship stuff – the Heroes For Hire give it roots. #IronFistClub pic.twitter.com/0Sl9LQiROX

You know what the four most frightening words in the English language are? “Danny has a plan.” #IronFistClub pic.twitter.com/49yhszAj5C

By now you know the drill – this section is for retro reviews, interviews, and a few extra bits about Immortal Iron Fist….

“After reading this book I’m more motivated to read the continuing adventures of Orson Randall in the 1930s than I am to follow the modern-day struggles of Danny Rand. While Danny’s story is supposedly their focus, Brubaker and Fraction have instilled such an outrageous, colorful aura around his predecessor that he’s obviously the character they’re most interested in writing.”

“Howard Chaykin handles the artwork for the majority of this issue, but doesn’t seem to have a great hold on the lead character…. Chaykin interprets him with a chin the size of Massachusetts and a neck to match. The artwork surrounding Rand didn’t give me much cause for celebration, either – all of it detailed to a flaw, overflowing with excessive texturing while failing at the most basic concepts of composition.

The website Major Spoilers had similar things to say in their 2007 review of the issue:

“I really enjoy the history that Brubaker and Fraction have brought to one of Marvel’s most unique characters, and I find that every single Orson Randall moment ends up making the character even more endearing to me. In fact, the only real problem that I have with this annual is Howard Chaykin’s insistence on drawing Daniel Rand with a big, square head, and even that is a minor whine.”

Not everyone’s a Chaykin fan, it seems. 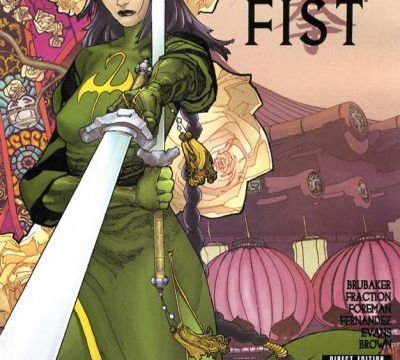 Tom Spurgeon of Comics Reporter also had a few things to say about Immortal Iron Fist issues 6-7 in 2007, and since I appreciate his opinion I wanted to include a snippet below. Read the whole review here.

“One for one, I actually preferred the more continuity-heavy, fight-filled issue #6 to the stand-alone story of a past holder of the Iron Fist title in #7. David Aja does a nice modern fight scene, with a jumble of panels and white space and tableaux trading off with single-action panels in a cramped, chaotic fashion. Russ Heath’s atmospheric pencils breathe a lot of life into some staid flashbacks. There’s even an intense story moment of the kind that drives modern comics and most of cinema, a small set piece that sounds as good when you talk about it (it involves a character’s heart) as it does when you look at it unfold on the page.”

Finally, we have a 2008 interview with series co-writer Matt Fraction from “The Grand National Championships” where he talks about this particular arc (and a lot of other cool stuff):

“Hm.  It’s a bit like wondering how hot dogs get made.  You could find out but you’d probably never eat a hot dog again.  So forgive me if I’m vague:

We came up with the superarc together, with a lot of back and forth.  It was Ed’s most brilliant wife Melanie, however, and her ENTER THE DRAGON poster, that inspired the heart of the second storyline.  So we beat out the story with one another, so we at least know the big moments, the twists, most of the ending, etc.  Then we just sorta bounce around a document until a script falls out at the end.  Some months we’re very much co-writers, some months I’m almost solo with Ed acting like a very hands-on editor.

As always, many thanks to everyone that participated, and I look forward to wrapping up this run over the next week! Stay tuned because we have a ton of stuff about Fraction and Brubaker leaving the series that you’re not going to want to miss. Of course, don’t forget to tag your discussions on Twitter with the hashtag #IronFistClub, or discuss your favorite parts of the second arc below!