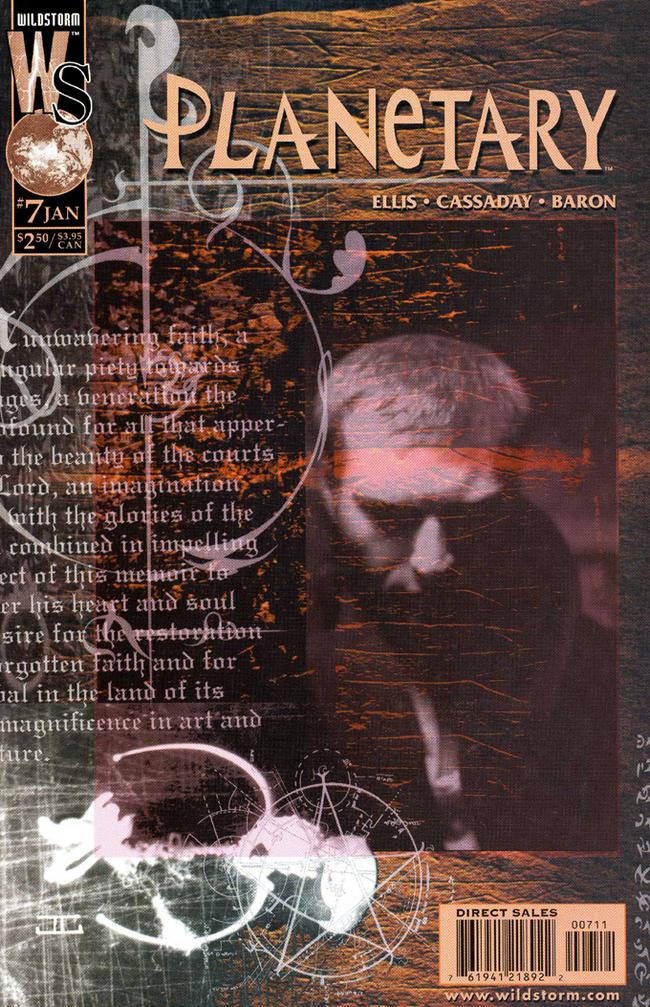 Welcome back for some more Comicosity Book Club! This week we are lucky enough to discuss volume two of the most excellent Planetary by Warren Ellis and John Cassaday, and the conversation just keeps rolling along!

Thank you all again for contributing your favorite panels, pages, thoughts, and other notes on the #PlanetaryClub hashtag! In this second roundup (and future roundups) we’ll be sharing our favorite tweets from the hashtag, as well as some extras about the week’s reading. Did you miss last week’s roundup? Read it right here! Then be sure to join in the conversation next week as we read volume 3 of Planetary (issues 13-18)!

Without further ado, some great tweets:

The League of Extraordinary Gentlemen, the book is bursting with homages to different ideas with its own amazing spin. #PlanetaryClub

It takes all these ideas, mixes them together, and then makes something even better. #PlanetaryClub

Look at all these space police corps members!! #PlanetaryClub pic.twitter.com/lMZZnohnu2

Best argument against Man of Steel if I ever heard one #planetaryclub pic.twitter.com/KrReuIspgG

Painful and poignant moment during this week’s #planetaryclub reading… Double up on your double-entendre here. pic.twitter.com/7PD1vx0pvH

First up in the extras this week I just want to reiterate how much I love issue 7’s cover… I know each issue is a take on another series, but this Sandman homage really hits the nail on the head. I wonder how many people thought it was a Sandman tie-in issue?

Look, even Dream and Death make an appearance!

Ok, enough nerding out over here, let’s get to some retro reviews! First up is a review for issue 7 from the Planetary fansite I clued folks into last week:

Jack Carter is Ellis’ take on John Constantine, of Hellblazer fame, and arguably the single most important character of the VERTIGO line from the late eighties to the early nineties. The dialogue, trench coat, and ever-present cigarette are all there, and the tale Jakita spins is a fair approximation of the unsettling tone of Carter/Constantine’s tales. Ellis chooses to explain Carter/Constantine as the logical outcome of the social and political environment of the eighties, giving the book a political edge that it hasn’t seen before: dark, insane times lead to dark, insane people. Or at least dark, insane fictional characters. (Depending on your politics, this may or may not be an acceptable answer. It works for me.)

You can read the full breakdown here.

Next up we have a very recent breakdown of issue 8 on Comics Bulletin from our friend Chase Magnett and Ray Sonne, which was posted in November 2014. Here’s a quick excerpt, but don’t miss their full take (as well as commentary on issues 9 and 10):

I don’t think this issue relates directly to the comic book medium, but rather to all of the stories that were born out of the Red Scare. Once again, Warren Ellis and John Cassaday have crafted a metaphor that creates a neat statement within this single issue, but doesn’t hinder the larger story of Planetary. It all hinges around the science fiction films that arose in the 1950’s as a response to McCarthyism and government control over media.

We also have a review of issue 10 from 2010, which discusses the importance of this issue as a one shot over at “Read/rant.” This review is a quick good read!

“Magic and Loss” is essentially plotless, a series of three vignettes that end before they should.  No one knows the significance of the cape, lantern, and bracelets they found, and they never will.  And that’s the point, the ‘loss’ of the issue’s title.

Finally, I leave you this week with a thoughtful take on Planetary in the Sequart article, “Modernism and the Birth of the American Super-Hero,” from October 2005. It’s a pretty deep read, but if you’re interested in the history of superheroes it’s definitely worth checking out. Here’s a small excerpt:

Warren Ellis (writer) and John Cassaday’s (artist) Planetary was first published in April 1999 and from its very first issue it became extremely apparent what their intention was: To trace the ancestry of the American “super” hero. By doing so, Ellis’s meta-narrative / history places the birth of the “super” hero at the beginning of the twentieth-century. The effect of this is the revelation of the birth of modernism in American culture and an archeology of American popular culture. By result, there exists a paradox in his creation. Ellis has shaped a situation wherein he has created the ultimate postmodern super-hero concept while at the same time revealing the modernist arrival of his own heroes.

As always, many thanks to everyone that has already participated in reading Planetary with us. We look forward to seeing your thoughts on volume 3 (issues 13-18).  Of course, be sure to share all your thoughts on the #PlanetaryClub, and stay tuned for more great panels and extras next week!