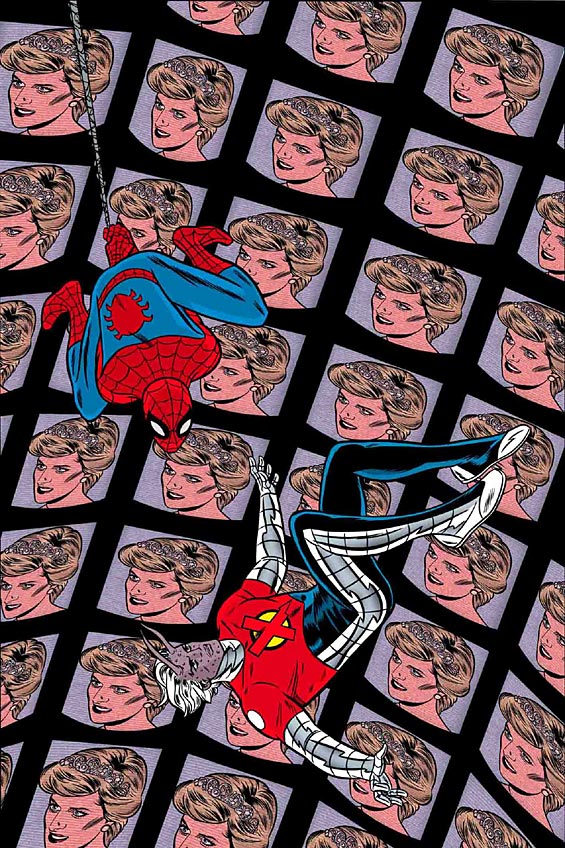 Holy cow it’s been ten weeks of reading X-Statix (and X-Force)! This week for the Comicosity Book Club we were fortunate enough to enjoy issues 14, 15, and 16 of X-Statix by Peter Milligan and Mike Allred. In this week’s reading we learned a bit more about Robbie (El Guapo), and Henrietta became team leader! Also, a few people die at the end, but it’s kind of a cliffhanger. I guess we’ll just have to wait and see how this plays out!

Want to join in the conversation? Follow the Twitter hashtag #XStatixClub each and every Sunday! Let’s kick things off with some highlights from this week’s conversation. 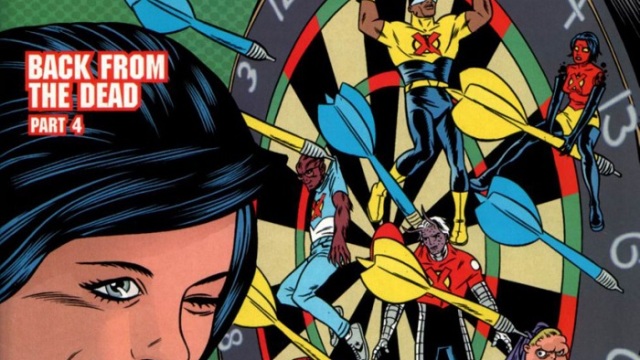 I always wondered why I ate a balanced diet. #XstatixClub pic.twitter.com/Ce1od9MVNb

It wouldn’t be a Marvel comic without a friendly neighborhood Spider-Man crossover. #XStatixClub pic.twitter.com/lk1bHOeNSw

Henrietta *sounds* right. But is she, to demand that from athletes, performers? (Wiki CharlesBarkley.) #XStatixClub pic.twitter.com/vjDyjE0zqJ

This homage to their first X-Force issue builds suspense for readers who were there from the start. #XStatixClubpic.twitter.com/VfWhAvwznL

Sadly for us, there are no letters columns for any X-Statix 14-16. What’s up with that, Marvel?

At least some people talked about these issues so I can pool some retro interviews! Let’s kick things off with a 2003 review from Cxpulp.com, which is keen to point out that Henrietta was supposed to be Princess Diana (remember I talked about that last week?). Al writes:

“I want to like this story arc – I really do. But I just can’t…. At the risk of sounding like a broken record, I’ve honestly tried to read it for what it is and not what it could have been. But there are just too many discords that have rendered this story arc dysfunctional. For one thing, “Henrietta Hunter” neither acts nor speaks like a “pop star,” and all the mannerisms and speech of a well-bred princess all remain intact. So the characterisation of this “pop star” is clearly awkward and more than a little off.

Furthermore, there are just too many elements of the story that are clearly meant for Diana, but do not work with an original character in the same way.”

LJ disagrees with the assessment that isn’t a good storyline with his review of X-Statix 15:

“The fun in reading X-Statix is not just in the plot, but also in the entire story: the plot twists, the characters, the snarky scenes, the crisp dialogue, the pointed social criticism, and the witty examinations of American life and pop culture. Milligan is writing a comic truly meant for grown ups with mature minds. This isn’t some comic in which the idea of adult means mindless violence and insipid sexual innuendo. This is just fun – superheroes with a knowing wink at the real world while retaining its wild fantastic aura. “

As I have done in earlier weeks, I did want to take a quick look at sales numbers since we have a brief drop in from everyone’s favorite web-slinger, Spider-Man! He graces the cover of X-Statix 14, and even has a few lines in the first few pages. Similarly to Wolverine, it’s not much to assume that this was part of an effort to boost sales for the struggling title. So, did it work?

I think that’s a pretty conclusive “No” that Spider-Man didn’t boost sales and was sadly thrown into a constantly less popular book. I doubt double shipping these books helped much, either… (also, thanks Comichron!). It’s also entirely possible that Spider-Man wasn’t doing so well himself, as noted in this “The State of American Comics Address, 2003” article on Sequart

As always, I send out my thanks to everyone who participated in the Comicosity Book Club! Next week we’ll be talking about X-Statix 17-19. Please join in the conversation using the hashtag #XStatixClub next Sunday! Also! Stay tuned for info about our next book club book, Gotham Central!