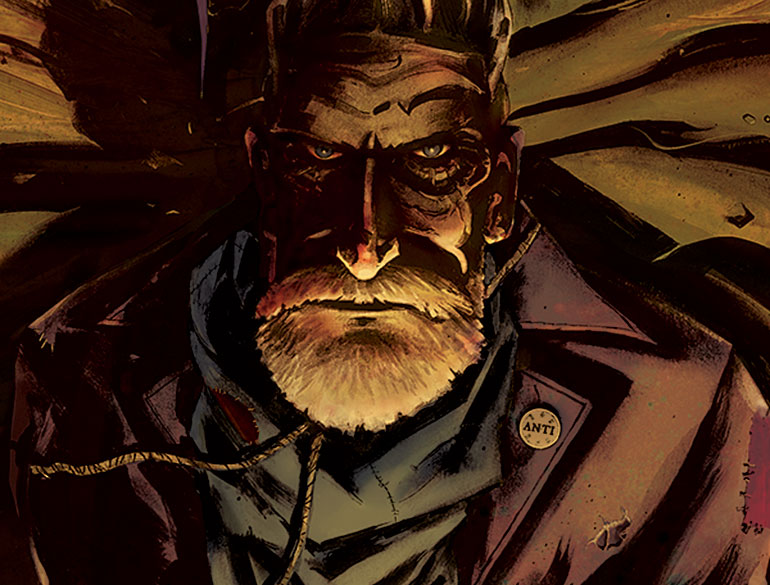 He is one of the most compelling figures in American history. John Brown, the militant abolitionist who came to embody the violent counterinsurgency against the bloody institution of American slavery, is the subject of Wilfred Santiago’s latest masterwork. Rooted in the iconography of the Civil War, the symbolism of religious fervor, and the violence perpetrated by all sides, Thunderbolt: An American Tale Volume 1 (Mad Creek Books) is a visual feast that takes us through key moments in Brown’s life and his lasting impact on American history. 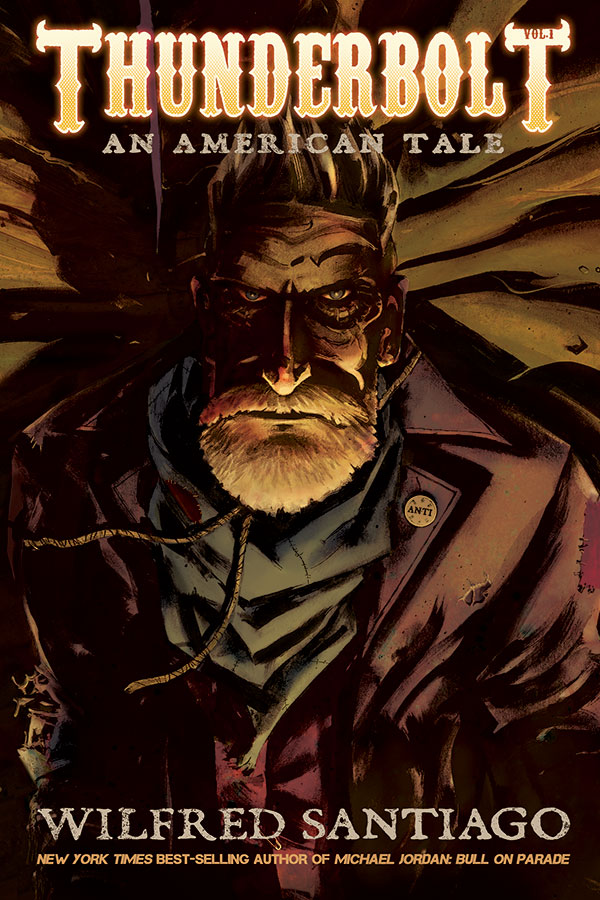 With the exception of his first book, In My Darkest Hour (2004), a personal journey through depression and identity, Santiago has plowed a path of what I have called biographics — comics with the biographical person as its subject. His masterful exploration of Roberto Clemente, 21: The Story of Roberto Clemente (2011), brought the hall of famer to life in ways other biographies had not, stretching and contorting his body on the baseball diamond so that he took on the look of the superhero. For many who revere Clemente as a secular saint, Santiago was merely pointing out the obvious.

He did a similar thing with Michael Jordan: Bull on Parade (2014), turning the icon into a superhero on the page rather than on our television screens. While Santiago captures the tragedy of Clemente’s untimely death with a fatalistic sense of purpose, he manages to humanize Jordan as someone with foibles and a rare work ethic.

In these biographics, Santiago is less interested in the cult of personality than he is the human operating behind the veneer of celebrity or folk heroism, with stunning effect. The reader is left with a different sense of the biographic subject, one enriched by human frailty and uncommon purpose, no matter how familiar the subject might be.

Santiago at last takes on a subject free from the allure of sports or even the twentieth century, but one that carries a tremendous amount of connotation and controversy. In Brown, Santiago reaches back a century and a half to recast the legacy and myth of the famed abolitionist. The wild-eyed Brown fits perfectly with Santiago’s artistic penchant of distortion and visual hyperbole.

The paintings of Ole Peter Hansen Balling and John Stewart Curry serve as the visual launching point for Santiago’s version of Brown, for those paintings are seared into the consciousness of aficionados of American history. Like Abraham Lincoln and Frederick Douglass, John Brown’s grim visage appears made for such controversial and disputed times. Santiago captures the darkness and ferocity in Brown’s severe facial features, but he also recasts the visual Brown for his own storytelling purposes.

Indeed, these early paintings of Brown fit well with Santiago’s painterly style. But because his actual medium is sequential art, reading Thunderbolt is like observing a painting come to life. Many of Santiago’s panels could serve as a standalone painting, which is indicative of the time he has invested in this work. 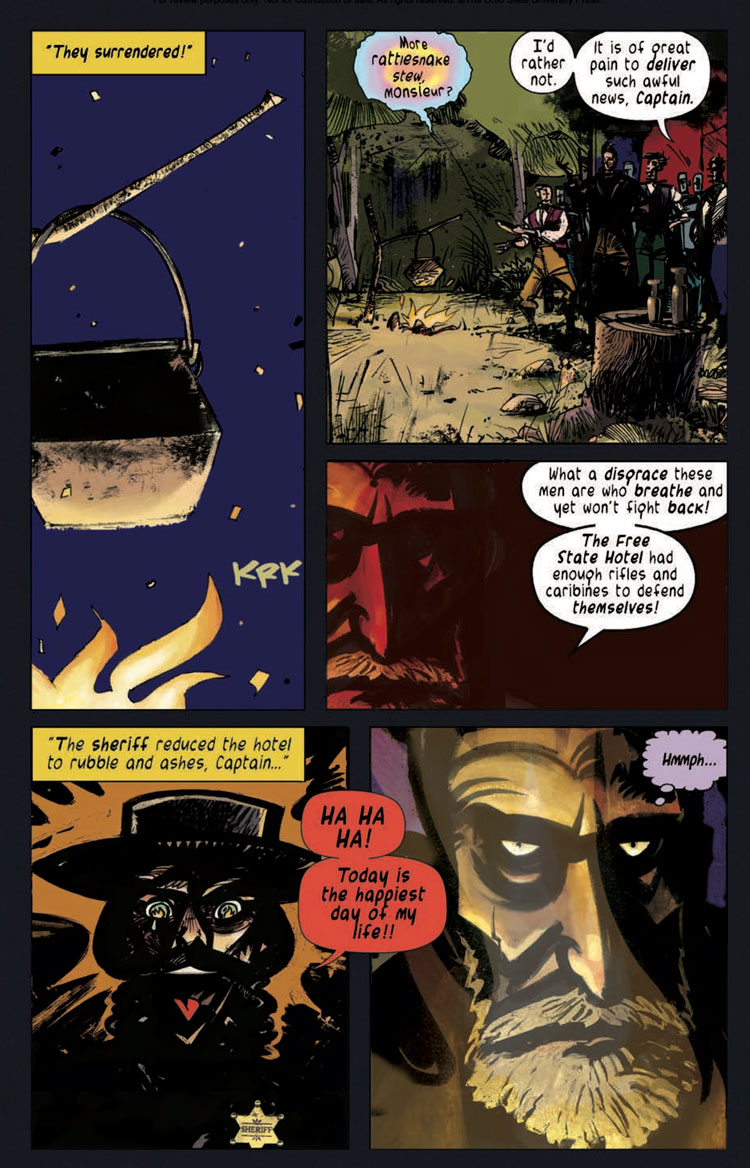 In fact, Thunderbolt took its first steps, as it were, over seven years ago in the form of a webcomic.

It has been well worth the wait, and within a few pages one can see the payoff. Moreover, as indicated by the “Vol. 1” in the title, this particular book is only the initial foray into what will undoubtedly be a fuller exploration of John Brown to come. Thus any review of this book has to keep squarely in mind that this is the opening act.

But what an act it is. The prologue invokes the framework that will under-gird the rest of the volume: the political impasse concerning slavery and the destinies of new states to the nation. In particular, the fate of Kansas is one central concern. The so-called Border War ranged from 1854 to 1861, and the violent clashes gave cause to dub the proposed state “Bleeding Kansas.”

Though the conflict was complicated, as most history is, it was defined generally by bloody skirmishes and battles between those who supported Kansas as a slave state, the “Border Ruffians” and those who opposed it, the “Free Staters.” Political upheaval and distrust in the fairness of elections served as the incubators of these violent encounters. Santiago sets the stage for this historical context before the appearance of the title page. He moves from the floor of Congress in 1856, to a Border Ruffians incursion of violence on the Free State Hotel in Lawrence, Kansas, to John Brown’s camp that hears of the Ruffian violence. Brown is shocked that the Border Ruffians refrained from murdering anyone, but he is also disgusted that the Free State Hotel did not fight off the Ruffians.

“What a disgrace these men are who breathe and yet won’t fight back,” Brown glowers. “The Free State Hotel had enough rifles and carbines to defend themselves!” The narrative then shifts back to the U.S. Capitol, where the violence is now located not among Border Ruffians and Free Staters, but literally between the very congressmen and senators who create the laws. 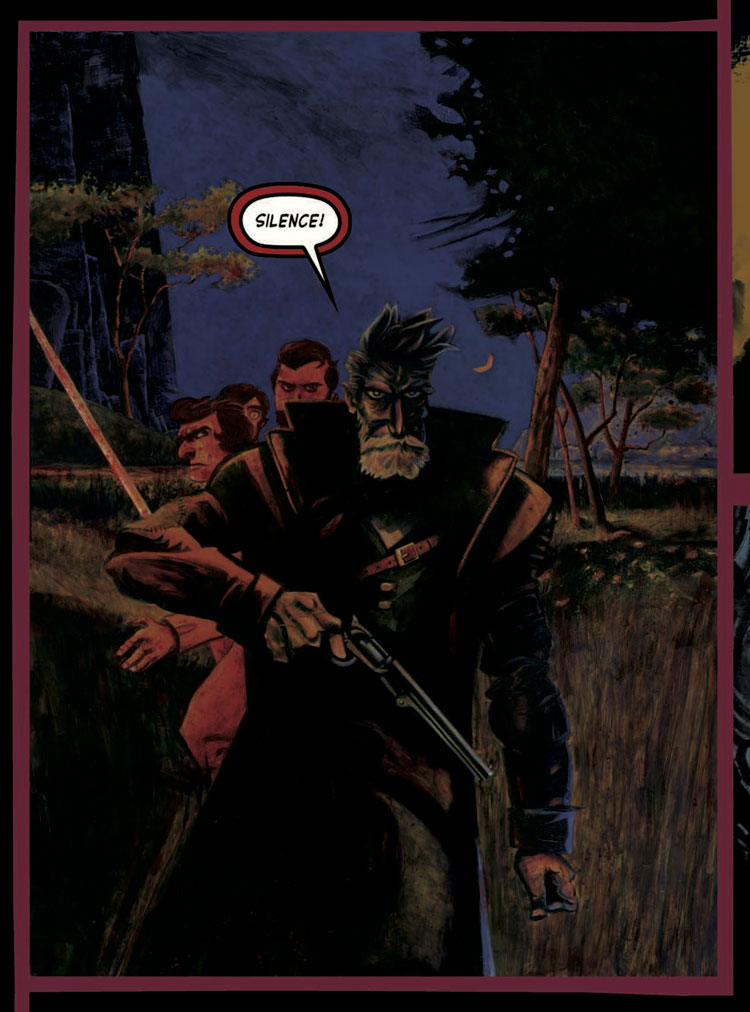 Readers of In My Darkest Hour will remember how Santiago does not shy away from violent, disturbing, and violent imagery. He recognizes his greatest power is his ability to confront the reader with an image that often cannot be unseen. Though his previous biographics — those on Clemente and Jordan — eschew graphic depictions of violence or trauma, the events surrounding Brown’s abolitionist calling cannot be done justice without such graphic depictions.

To do otherwise would be to sanitize and cheapen this history, and thus Santiago is almost the perfect artist to bring that history to the medium of comics. Violence, the threat of violence, and the consequences of violence reverberate throughout Thunderbolt, and the effect is heightened drama and an uneasy tension that comes from not knowing what the next page turn will bring. Brown’s religious zealotry and his connection to his family, in particular his sons, serves as the foundation for Santiago’s exploration.

Ultimately, it is Santiago’s selection of John Brown as his biographic subject that enables the dynamism that readers will find in the pages of Thunderbolt. Brown is both martyr and villain, the very embodiment of righteous violence. That is, the godly ends brought to fruition through unspeakable means. Santiago does not shy away from the challenge of bringing Brown’s story to the visual/verbal page. For that, readers should make for the nearest bookstore and feast on this terrific and inspiring take on American history.

Christopher González is an associate professor of English and director of the Latinx Cultural Center at Utah State University in Logan, Utah. He is the co-editor of the World Comics and Graphic Nonfiction book series with University of Texas Press. He is also the author, co-author, and editor of numerous books, including the Perkins Prize Honorable Mention, Permissible Narratives: The Promise of Latino/a Literature (2017).