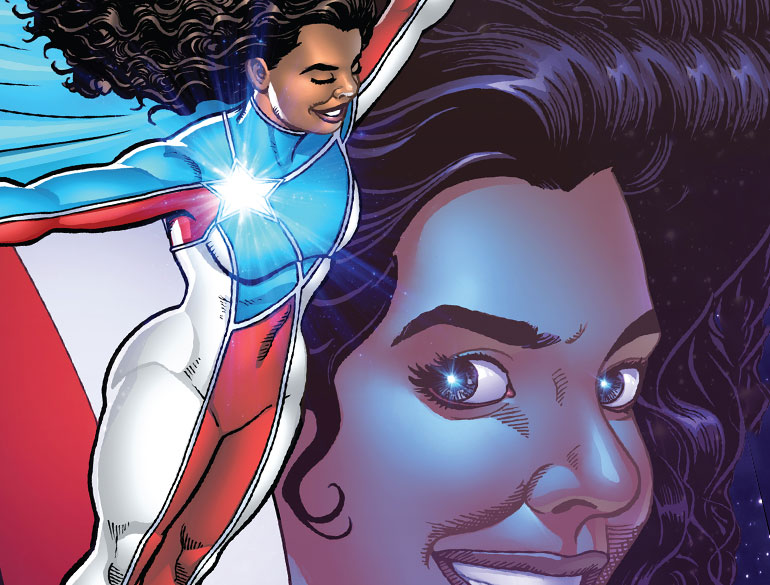 There is a beautiful woman from an island paradise with super powers granted to her by the gods that has become very popular lately. She can fly, has super strength, and a star on her chest, but she isn’t an Amazonian princess. Her name is La Borinqueña and she is Puerto Rico’s very own super hero. 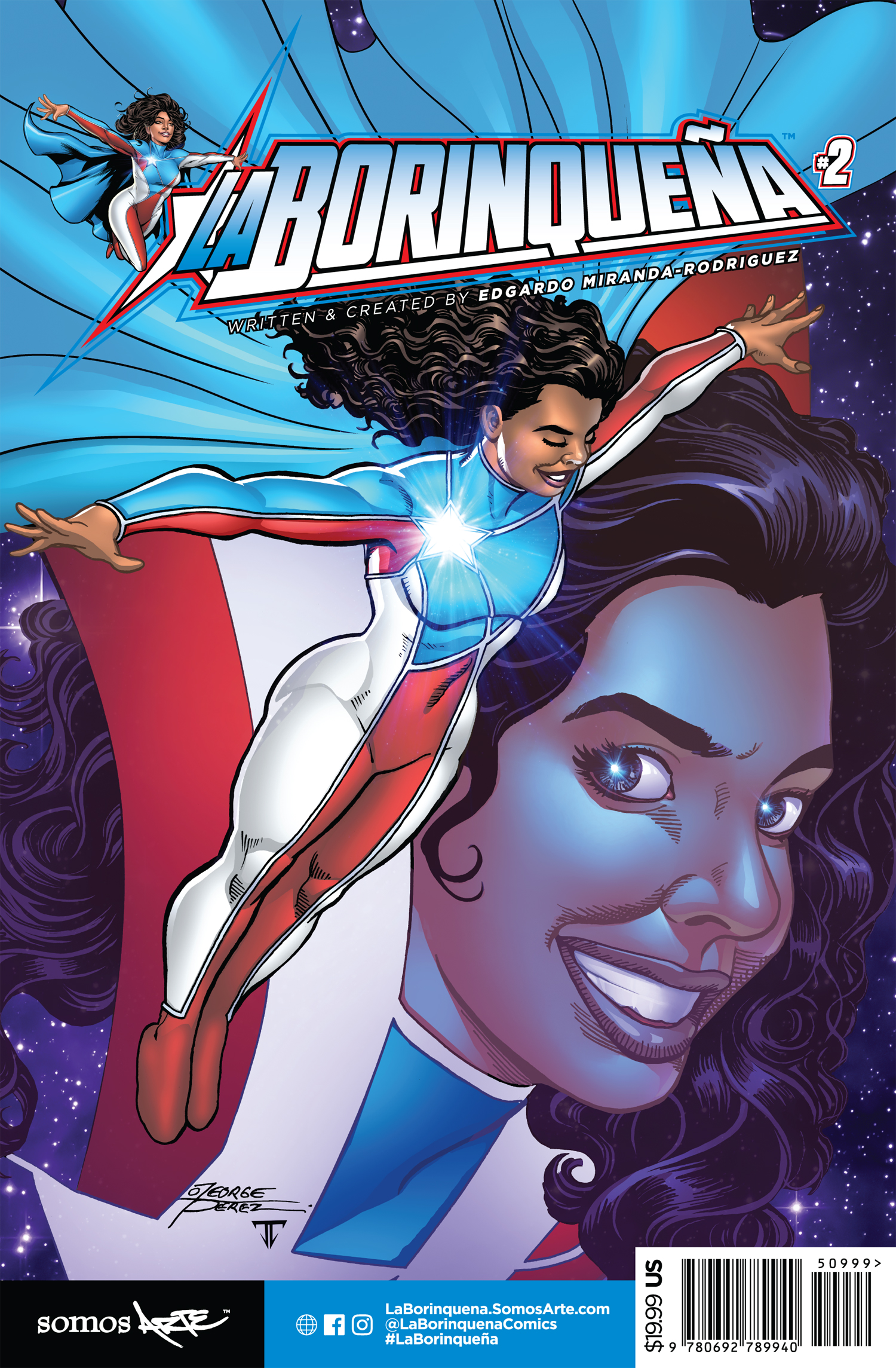 As the Afro-Puerto Rican super hero she is proud of her heritage and comfortable in her skin. She embodies the entire population of the island of enchantment in one vibrant person and because of this she has been growing in popularity since her debut in her own solo title a year ago.

Now she is about to return for her second issue and to celebrate the book will feature a special cover by legendary artist George Perez. The Perez cover was also incorporated into a mural done by the Tats Cru in South Bronx.

La Borinqueña, who’s secret identity is Marisol Rios De La Luz, is a young woman from Brooklyn who travels to her family’s homeland of Puerto Rico for a college research project. While she is exploring a cave to collect samples she stumbles across some crystals that grant her power far beyond those of any mortal Latinx.

These powers are given to her by the gods of Puerto Rico so that she can become a champion for the island and it’s inhabitants. She proudly takes on the mantel of La Borinqueña, which is also the name of the national anthem of the country, and quickly puts her powers to use for the good of the people.

La Borinqueña was created by artist Edgardo Miranda-Rodriguez who writes, letters, and art directs each issue.  The issue art work is done by well known Puerto Rican comic book artists Will Rosado, Emilio Lopez, Juan Fernandez and Sabrina Cintron. In fact he has produced the book entirely himself without the help of a publisher.

Miranda-Rodriguez, who has done work for Marvel in the past and is currently the art director of his own studio based in Brooklyn, tours the country to speak about his creation and create awareness about Puerto Rico. I contacted him for some thoughts on the creation of his character and the importance of her for the Latinx community. 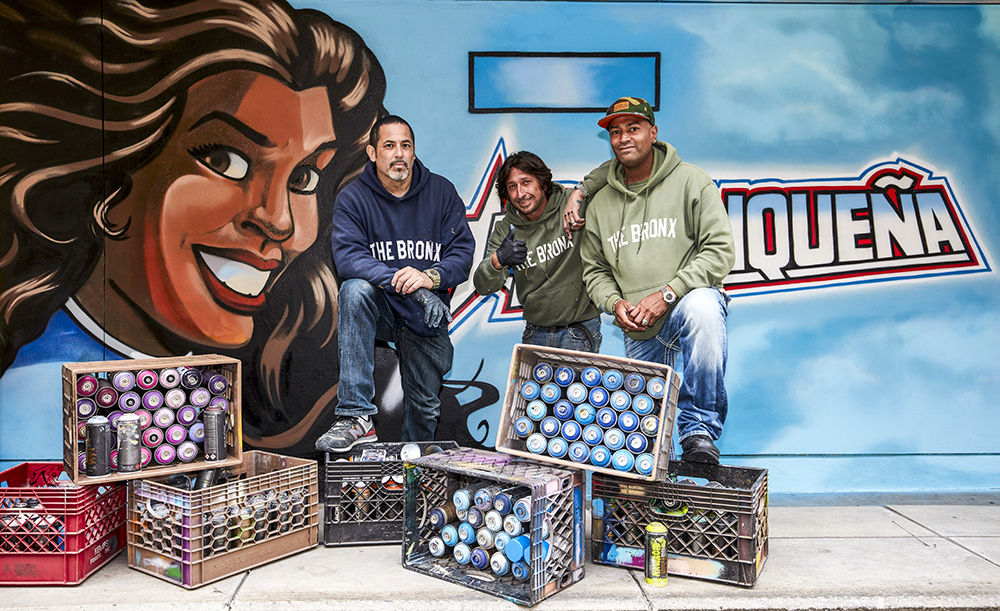 Chris Campbell: Every culture has their legends and heroes that can be anything from a god to a super-powered human. What inspired you to create La Borinqueña? What makes her different from other super heroes

Edgardo Miranda-Rodriguez: I am very moved by the economic and environmental crises currently affecting the island of Puerto Rico as they are currently in bankruptcy court over a $123 billion debt. This month 184 public schools closed displacing 27,000 students this fall.

In addition, this year marks the 100th anniversary of the Jones-Shafroth Act which granted Puerto Ricans American citizenship. Given the history and current social issues that Puerto Rico is facing, I wanted to create a comic book series that would help raise awareness not only among Puerto Ricans, but other Americans and comic book readers internationally. They are Americans who historically have been treated as second class citizens by not having the right to vote for a representative or senator with voting power nor president.

CC: Legendary creators like Stan Lee used current dangers facing humanity to come up with some of the origin stories for classic characters. How did you come up with Marisol’s origin story?

EM: For Marisol, I tapped into Puerto Rico’s mythology. Before being colonized by the Spaniards, the island was called Borikén by it indigenous people the Tainos. The Tainos had their own mythologies which inspired me to give my character elemental and superhuman powers.

CC: Why did you create a female hero? Is Marisol based on anybody in particular?

EM: The national anthem of Puerto Rico is called La Borinqueña, which translates into the Puerto Rican woman. I’ve always been inspired by the women in my life who have raised an mentored me. It never occurred to me to make my hero a man, but interestingly enough, I don’t believe I’d ever be asked this question if my character were a man. 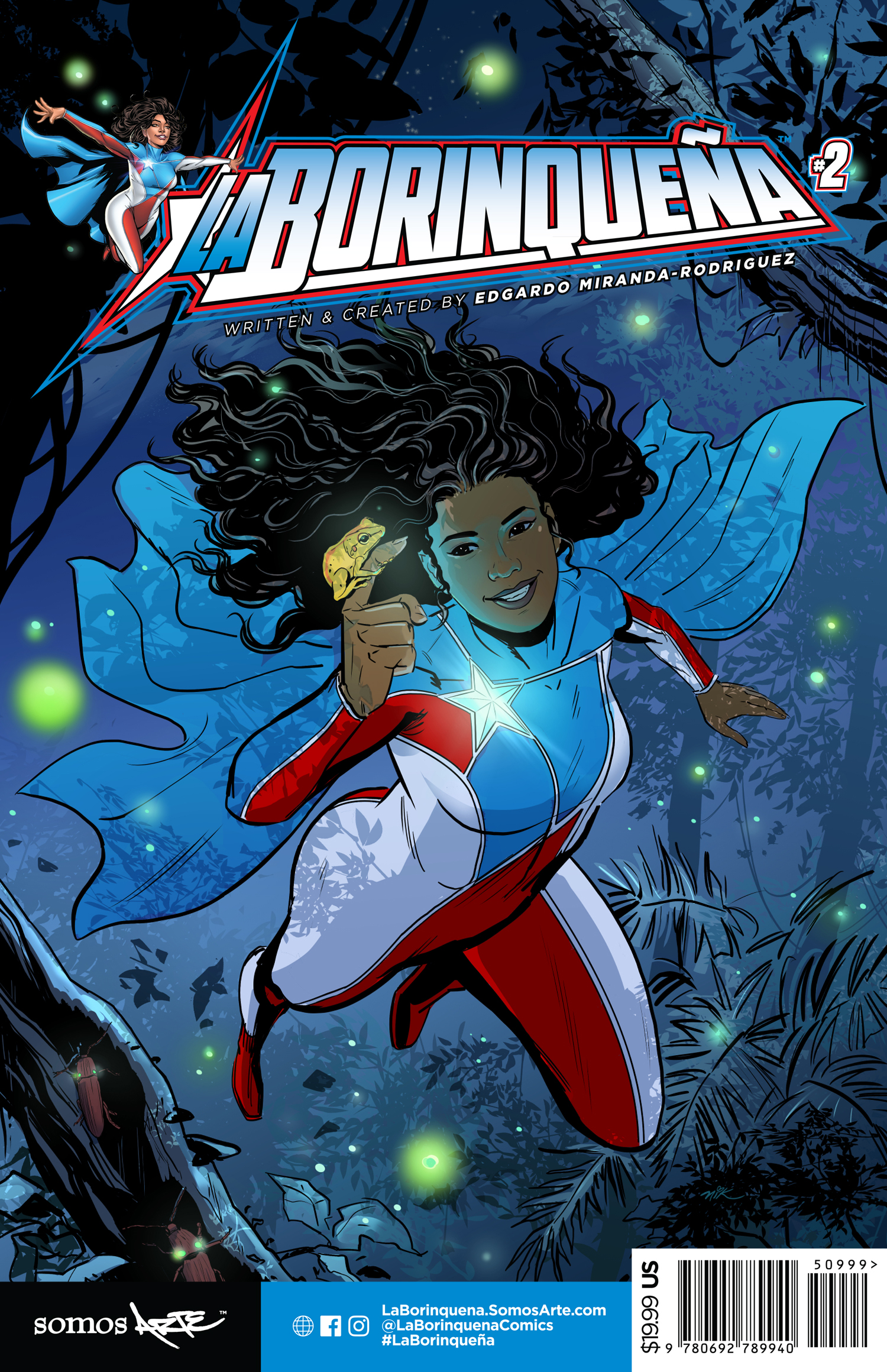 EM: Representation. For generations, people of color have found the universality in characters that don’t look like them. Many of us buy comic books and movie tickets for heroes that represent altruistic values. When a person of color, sees themselves on the page, they naturally become empowered.

I didn’t create La Borinqueña to be a hero just for Puerto Ricans. I incorporate in my writing the same values that anyone else has, therefore lending her to be universal. It’s the human condition that attracts us to a narrative. We all have something that fundamentally connects us. When you grow up not seeing yourself, you lose a little bit of yourself. When you do see yourself, you soar.

EM: Marisol is in an interesting space as a superhero. She received her powers from the gods of Puerto Rico, mother goddess Atabex and her twin sons Yucahu and Huracan. Puerto Rico however, is a territory of the United States. On June 11 there will be a non-binding plebiscite on the island to vote for statehood, independence, or remain the colony that they are. If a hero is born under these circumstances, how does she define herself?

I intentionally wrote Marisol as a college student, not as an already independent adult. She is still learning about the world around her, finding herself. At its core, La Borinqueña is a coming of age story. She is however coming of age in a very interesting time to be a Puerto Rican. This will inevitably shape her to be the hero she is needed to be. 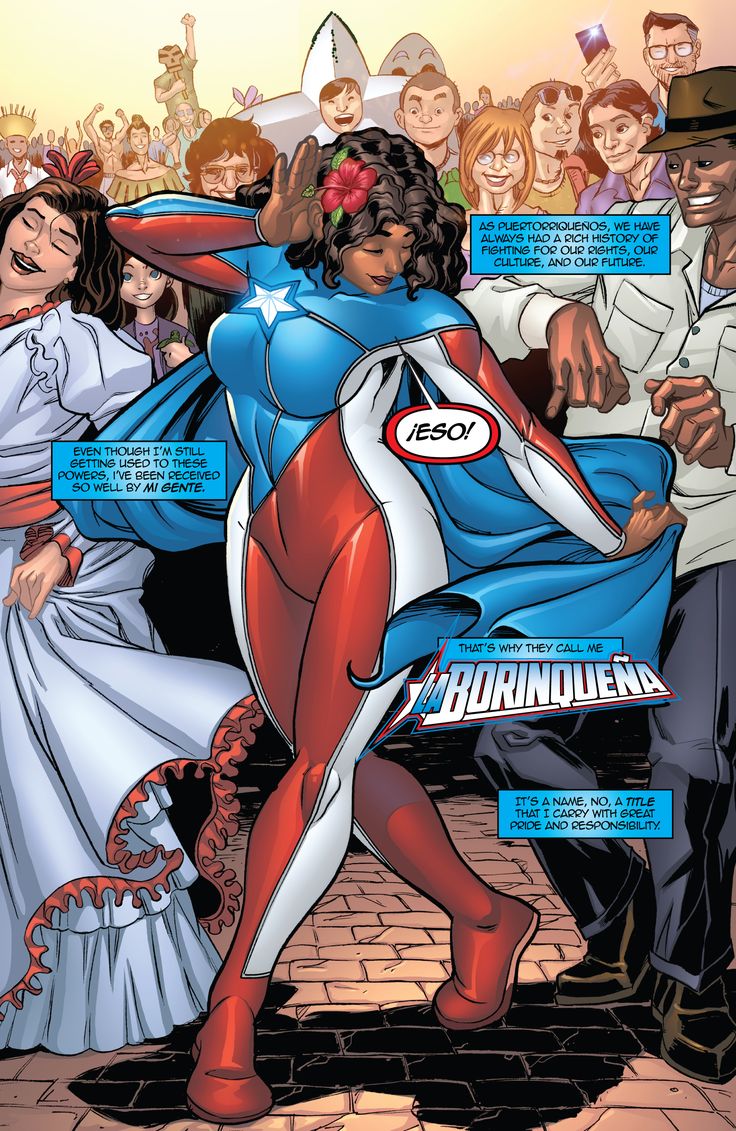 CC: This first issue is her origin story but in future issues what kind of problems will we see her face? What social issues would or will she have to face that other mainstream heroes don’t have to deal with?

EM: There are various social issues currently affecting Puerto Rico that are giving me a lot to draw from for storytelling. She is a college student after all trying to complete her semester abroad as part of the University of Puerto Rico that is currently facing $450 million in cuts, leaving many students to go on strike.

In addition, there is a lot from the past that can help shape my narrative, especially for a hero that is a woman. In the 1950s, the US imposed sterilization policies in Puerto Rico lead to about 1/3 of women between the ages of 20-49 to be sterilized.

This all helps me to shape a story that can connect to the real world in the way that most comic books don’t. As a superhuman, she has to toe the line between what she can assist and what she simply has to let be. It’ll be the biggest challenge that she’ll be facing.

EM: Currently I am working on the second issue of La Borinqueña which is available for pre-orders and will ship this December. Now that she has received these powers, she will learn the responsibility and ramifications that come with having them. Every action she takes, every decision she makes will leave lasting impact on her, her family and Puerto Rico. I’m continuing on my national tour talking about the process of self-publishing this comic book as well as raising awareness on the current issues affecting Puerto Rico. 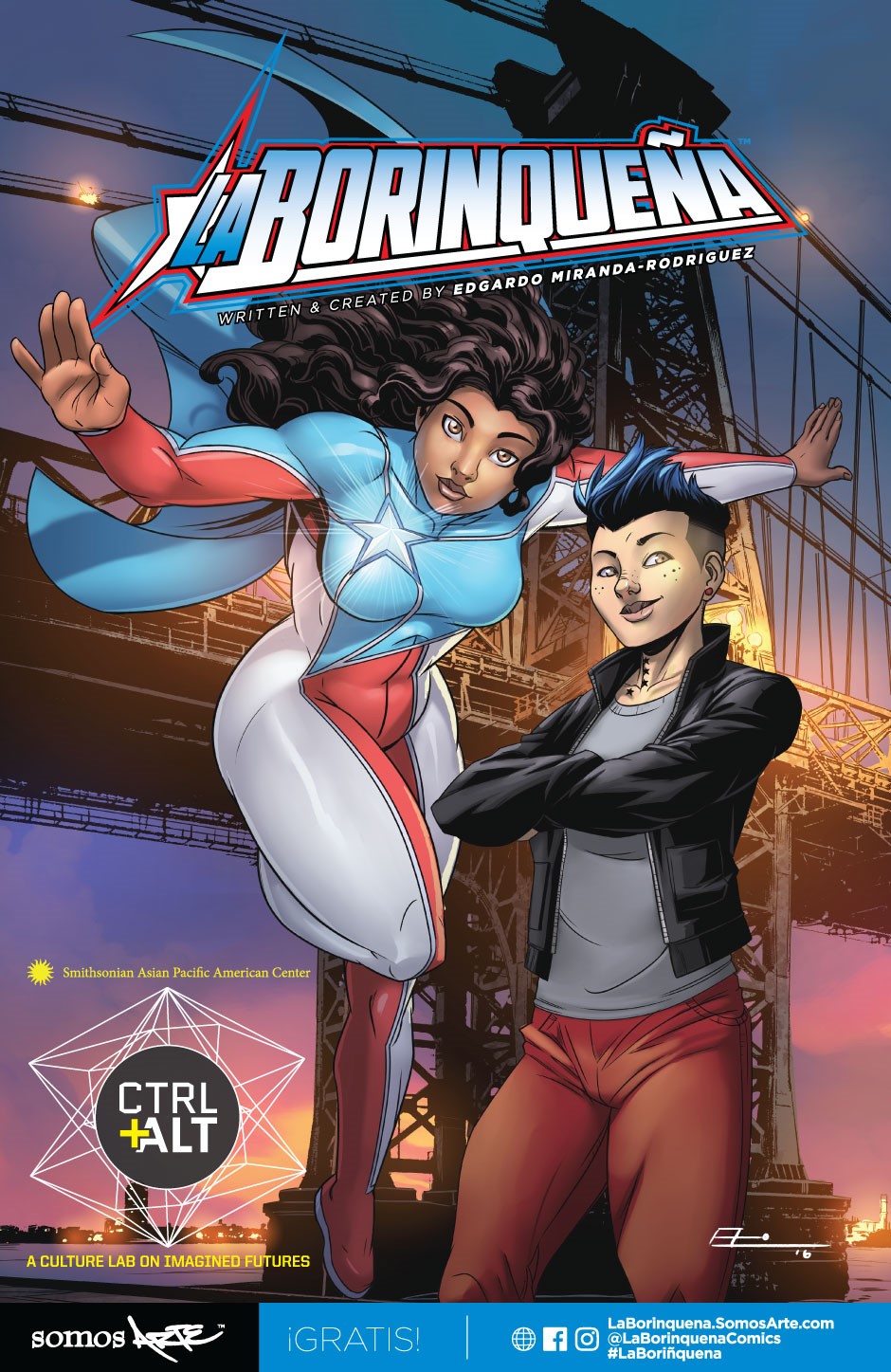 CC: What was it like working with the legendary George Perez for the cover of issue #2?

EM: I was invited last year to my first comic con, the Aguada Comic Fest. They asked if I could help them invite George Perez, which I gladly did. Days before I attended their event in December of last year, I had copies of my debut comic book.

At the hotel I was staying with my family, I had the chance of giving George Perez a copy of my book. He shared with me that in his entire professional career he had never once visited Puerto Rico. He thanked me for helping to make his first trip. He took my copy of La Borinqueña, and went on about how much he loved her costume design.

He then asked if I would consider accepting a cover that he would draw for my second book. I was humbled and honored. We would talk over the months after the show in December as she shared that his eyesight was deteriorating and how soon he’d have to undergo surgery for a second time for his glaucoma. He finally delivered the artwork for the cover, apologizing for its delay. I immediately fell in love with his piece. It felt like I was holding a classic cover from the 1980s.

To know that I was lucky enough to have him do a piece for me is awe-inspiring.  This is why elements of this cover will be incorporated into a mural that will be painted in the South Bronx where he and I both grew up, to further inspire other young people to pursue their dreams to create art and tell stories.

Find out more about La Borinqueña at her website: http://laborinquena.somosarte.com/