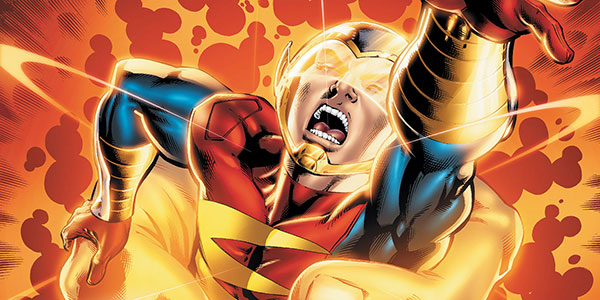 This is a sad, sad day for many of us.

In a brief two tweet message yesterday, James Robinson announced his upcoming departure from Earth 2 — the title he single-handedly crafted and shepherded into the New 52 — and DC Comics as a whole. 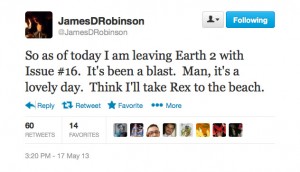 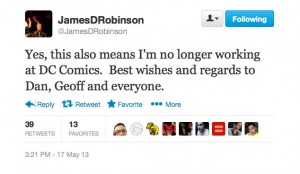 I’ve made no secret, obviously, of my deep love and appreciation for this series at my local comic shop, among my friends, and online. Earth 2 is one of only two titles I buy an extra copy of each month to give to a friend, and it’s always the one I suggest to comic readers who haven’t given DC or The New 52 a try. It made my Best of 2012 list in multiple categories, has earned frequent 9.5/10 and 10/10 scores from me for individual issues in reviews, and I never failed to submit a question to ComicVine’s podcast when James would come on to discuss the current month’s issue.

That James himself made such an effort to interact with fans, share his process openly, and speak frankly on his love for the characters and world only made Earth 2 that much more of an engrossing experience for readers. Fans knew that the key creator behind the book loved this world and its inhabitants as much — if not more — than any of us, and somehow it made us even more excited for what was to come. The extensive thought that went into Jay Garrick’s characterization as an everyman, or Alan Scott’s re-envisioning as an out gay man, is clear on the page, but becomes crystal for even the most critical of fans once you hear it related in Mr. Robinson’s dulcet tones directly. This title has been such a unique experience for us in so many ways, as we all got to feel like we had a stake in its success, but still trust that someone who understood our concerns was the driving force behind it. And it never felt abusive or overreaching from the fan side, as something like this could easily devolve into being. And that alone is a miracle of miracles. 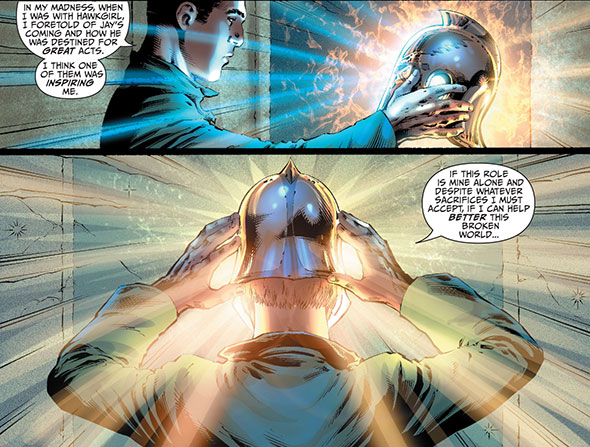 As a title that was removed from the main continuity of the DC Universe from the very start, it has never felt unimportant or lesser for it. Unlike Legion of Super-Heroes, a title that of late seemed very adrift in a sea of irrelevance, Earth 2 was quite possibly THE most important DC title for many, and certainly one that’s drawn the largest cross-section of readers to it. From fans of the Silver Age Justice Society of America to those who grew up on legacy heroes that populated the pre-Flashpoint universe, avid readers of Earth 2 have come together to praise and share the book. Even those who felt turned away by the rebooted aspects of the New 52 seemed to find a creative respite in this title — perhaps DC’s most radically changed title of all. We can speculate on the many reasons behind that phenomenon, and there are many great things about the title, but it all comes back to a significant key element for success: James Robinson. 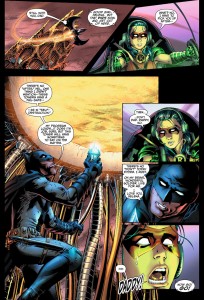 James knew from the start that you needed to flesh out these individuals who would become the Justice Society, but that the effort couldn’t just stop there. The world in which they lived had to be different — unique — in such a way that it validated its own existence as separate from the main DC Universe. This Batman had to be more than a carbon copy or template (depending on your perspective) for the Bruce Wayne appearing in 10 monthly titles. How Darkseid’s forces overran this world had to have a different outcome than his attempt at the same in the first story arc of Justice League. None of it would have mattered otherwise. And it’s clear from how we as readers have hanged on the edge of our seats for a year that it has mattered, and mattered a lot.

We’ve come to be enamored with the minor supporting characters of Earth 2 in a way that almost never happens with other titles. When Amir Khan takes center stage or we have scenes with Sonia Sato or Lee Travis, it never feels like something is being taken away or distracting from the main narrative. They are as much what makes this world tick as the Flash or Green Lantern or Hawkgirl, and that’s an astounding feat of writing. Because in the end, the development of these secondary characters into fully fleshed or intriguing figures adds to the experience of the book exponentially. 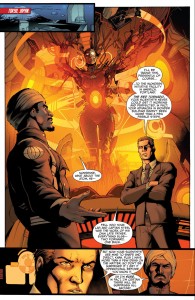 It’s no wonder fans have been clamoring for a second Earth 2 title almost since the first’s inception. The imaginary world here seems to almost be busting out of the pages, demanding more room to grow and share its every facet. I read a lot of titles that take minutes to read and rarely get revisited once bagged and boarded, but Earth 2 has never been one of those. There’s not one issue I haven’t poured over intensely for details, clues and Easter eggs — and multiple times at that — in order to get the full effect of what Robinson (and most notably Nicola Scott) have brought together. And every read increases my enjoyment over the previous one. How is that even possible?

As someone who invests a lot of my energy and commitment to issues of diversity online and off, Robinson has also been the exemplar for developing a world we can all see ourselves a bit in. Even past my initial excitement over Alan Scott’s re-envisioning, I can’t tell you how moved I was to realize Alan would be the leader of the new Justice Society. Choosing an out gay man to lead this world’s (and one of DC Comics’) premier super-hero teams touched me in a way I didn’t know was still possible in a comic. How many teens (or adults!) will read this book for years to come and see themselves reflected positively in Alan? How many real life heroes will this careful rendering inspire? It’s staggering to think of the potential that’s resting in that decision. 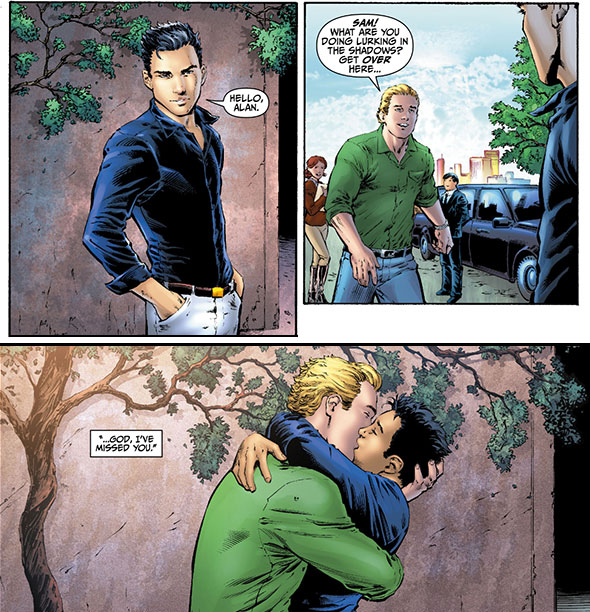 And that’s just the beginning. Embracing a biracial identity for Kendra Saunders-Munoz, introducing a new Dr. Fate of Egyptian origin, forging a World Army comprised of heroes from many nations, and setting adventures for the core team that take them across the world — these are all significant story beats by themselves, but when combined, represent a world so far past any we read in mainstream (or alternative, I’d wager) comics in terms of diverse representations of race, gender, sexual orientation and national origin. And yet it feels natural, because James has written Earth 2 like our own world, where African-American and LGBT citizens, among many minorities, aren’t tokens — they’re real people comprising a significant part of everyone’s every day life. I hear so much online about “the diversity checklist” and for the most part, I’m clear that the criticism comes from a deep investment in keeping racist, sexist and homophobic institutions in place. That aside, this is no “Justice Society of Benetton” as Robinson has often quipped, but a real reflection of what 2013 looks like for those who truly understand how the world has changed. And for a medium still stuck in 1956 representations in so many ways, this is an enormous accomplishment, and one which James and DC Comics should be very proud of. 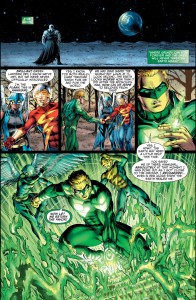 Earth 2 faced a very skeptical audience upon its initial announcement, with fans rallying against its presumed focus on the Trinity, against editorial comments on the fate of Lois Lane, against rumors of its removal of the legacy nature of the Justice Society we’d all grown so used to over the years. But what we found almost instantly with issue #1 was a brave new world that treated these heroes with the respect and admiration they deserved and with so much intrigue for what was to come you couldn’t help get excited for the next issue. To imagine that having happened in anyone’s hands besides James Robinson’s is nearly impossible, for in him we had a creator who loved this world all the way back to its inception in the 1940s, but was still committed to telling a 21st century story. And to be honest, I’m not ready yet to imagine what kind of person could pick this title up with #17 and give it the same respect and love James has. I honestly don’t know that I believe such a person exists.

Yes, creators leave books and new creators come on. Titles are cancelled and relaunched more often than some comic fans go grocery shopping. But when you get something special like Earth 2 — a book that literally made me feel the way I felt at 12 years old reading the Giffen/DeMatties Justice League International or the Levitz/Giffen Legion of Super-Heroes — you don’t want to easily let go. That magic is almost never duplicated or matched, and to even have the ability at nearly 40 to feel myself propelled back years in the way I experience joy from a comic book is such a special gift I find it hard to adequately describe. For this, I owe a debt of gratitude to James Robinson and all those who supported him, and if anyone at DC is reading, I thank you for the opportunity as well.

But I also ask that if there any way possible to keep this magic going, to not let Earth 2 #16 be the end of Robinson’s vision for and participation in the title, make it so. This experience is too good to let go of this soon.