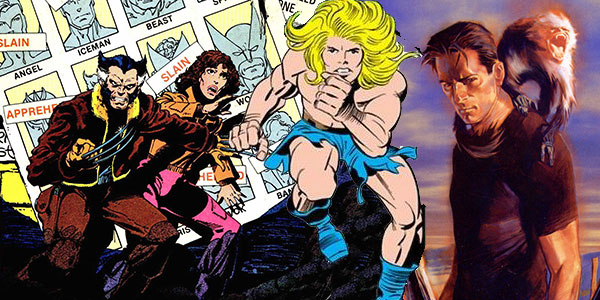 So, it seems the world didn’t end as planned. No earth-shaking apocalypse or mind-changing revelation occurred on December 21st — just some last minute Christmas shopping and a whole lot of Twitter commentary about how wrong the Maya were (P.S. They weren’t. Y’all just misunderstood them.). Real life isn’t like the comic books, after all. We can’t really expect our world to turn upside in an instant —plotted and dialogued to perfection — no matter how much fun it may seem.

Fun, you ask? Well, you’re right. Surviving a nuclear holocaust or navigating a plague-ridden landscape probably isn’t that much fun for those involved at the time, but it sure as heck is a blast to read. To celebrate our continued civilization (and in particular honor of today’s release from DC Comics, the final issue of Sweet Tooth), here are ten of my all-time favorite future disasters waiting to happen: 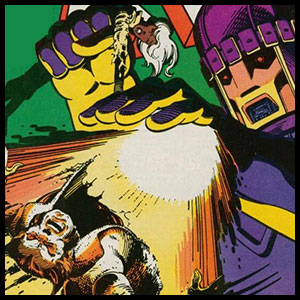 Days of Future Past

First appearing in the pages of Uncanny X-Men #141, the future described in Days of Future Past is a bleak one indeed. Sentinels had been reactivated by the United States government, supported by a Mutant Control Act, to eliminate the growing problem once and for all. In the process, however, the robots take over the whole of North America, classifying their prey by letter (H for Human, M for Mutant) and branding those they do not simply eliminate. Concentration camps are now the norm, and resistance is slim. With only Kate Pryde, Wolverine, Storm, Colossus and a second generation Phoenix remaining, the X-Men have been decimated.

It’s only through the intervention of said Rachel Summers, the daughter of Cyclops and Jean Grey, that Kate is able to help prevent this future from ever occurring. Like all potential disaster in the Marvel Universe, this one remains — despite the successful completion of the time-altering mission — an alternate universe future for mutant and humankind alike. 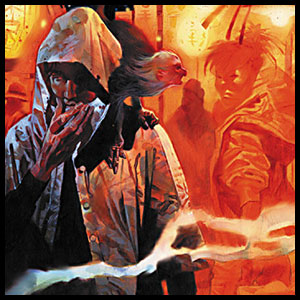 Think the world would be better off if all the men died or disappeared? Don’t be so sure.

Brian K. Vaughan and Pia Guerra’s creator-owned tale Y The Last Man tells the story of amateur escape artist Yorick Brown, the sole male survivor (along with his helper monkey Ampersand) of a deadly plague that simultaneously kills every mammal with a Y chromosome. Now the last remainders of a desperately endangered species, Yorick must travel across the country in disguise with the assistance of the mysterious federal Agent 355 and genius geneticist Dr. Allison Mann to reunite with his Congresswoman mother — now elevated to status of the President of the United States. The secret behind the cause of the plague is a fascinating tease, but the real driver behind the action is Yorick’s overwhelming desire to find his fiancée, whose last known location was the other side of the Earth. Amid Amazons wanting to destroy the last remnant of maleness and competing political interests from around the globe, it’s a dangerous world for the last man, no matter how nice a guy he is. 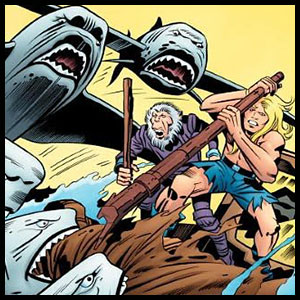 Kamandi: The Last Boy on Earth

In the wake of a Great Disaster, Earth’s human population is all but wiped out, with all of the remaining humans devolved into bestial beings. Animals, on the other hand, have had their intelligence accelerated with the help of a brain-stimulating drug released into the water supply. As a result, the world is overrun by fiefdoms of speaking animal masters in shades of The Planet of the Apes, with the last human boy to surface from an underground protective stronghold. That boy — named Kamandi after the bunker from which he emerges (Command-D, that is) — faces danger around every corner, but still exhibits a wide-eyed optimism for adventure and discovery. One of Jack Kirby’s most revered works upon returning to DC Comics in the 1970s (after having a hand in crafting much of what is the Marvel Universe today), Kamandi is a feverish cacophony of ideas and good old-fashioned comic book fun. 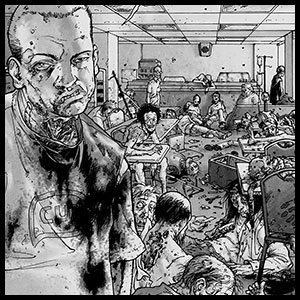 What if you woke up in the hospital and the world was silent? No nurses, no doctors — and everyone around you has disappeared? Then imagine a low murmur in the background getting louder and the unimaginable staring you in the face. The zombie apocalypse actually happened and it’s no joke.

A brilliant comic book series long before becoming a critically acclaimed television show, Robert Kirkman’s The Walking Dead brutally lays out what happens to the world when sickness hits and it never stops wanting to bite back. On the run from both zombies and other humans wanting to terrorize a fractured world, Kentucky sheriff Rick Grimes, his son, and their newfound family fight every day to survive in a rapidly disintegrating world. Frighteningly honest and graphic in both art and writing, The Walking Dead is as much about fighting off hoards of humans-turned-monsters as it is about negotiating the dangers of a society without rule of law and civility. 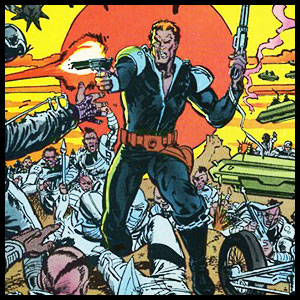 Everyone knows Jonah Hex is the baddest bounty hunter of the Old West, right? No question. But once the Crisis on Infinite Earths hit the DC Universe, everything changed (for a while, anyway). Disappearing from 1875 in a blinding flash of light, Hex reappears in a post-apocalyptic Western United States in the 21st century. Heavily irradiated by the fallout of nuclear war, the country is ravaged by motorcycle gangs, mutant worms, cults and robots. Hex quickly becomes attached to a warrior woman named Stiletta, with whom he fights his way across the country. Eventually coming up against an aged Batman, Hex brings his trademark to a future world where uncontrolled violence ravages the remaining populace. No better lawman to have on your side in any century, I say. 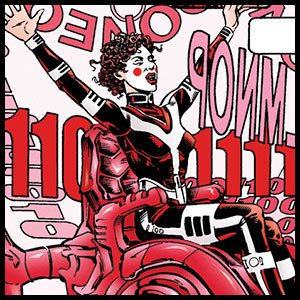 For centuries, the Invisible College has worked in secret to combat forces that would see humanity enslaved through physical and psychic means. Their foes are the Archons of the Outer Church, extra-dimensional beings whose only desire is complete and utter control of the minds and heart of the human race. The Invisibles will use any means at their disposal — magic, time travel, psychic projection, guns — to free us and ensure our elevation to the next level of existence. As we tread quickly towards the end of the world we know and the beginning of the next, the Invisibles are always there, working in the shadows to prevent our complete and utter oppression. And where the Invisibles are, their opponents are not far behind.

Terrorists or revolutionaries? Either way, the Invisibles — headed by the ultra suave King Mob — work toward the end of the Mayan calendar, when the world will begin to fall apart and lead us back to the Supercontext, also known as nirvana, heaven or simply that moment when we stop being individuals and come to recognize how we are all connected. On the way, Grant Morrison and his various collaborators describe a world where fiction and reality are interchangeable and words mean much more than you think. 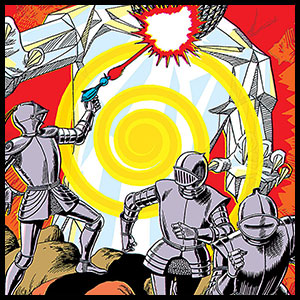 The late 1950s and early 60s were heyday for Cold War fears of nuclear devastation, and no story took that theme as literally as The Atomic Knights. Running every three months in the DC title Strange Adventures, The Knights were the guardians of what was left of the United States after the events of World War III, a great “Hydrogen War of 1986” that left petty fiefdoms and devolved humanity in its wake. Donning radiation-treated armor reminiscent of classic medieval garb (and riding giant Dalmatians into battle. How cool is that?), the Knights were just normal humans helping to bring order back to the country they loved. 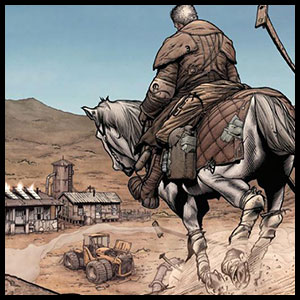 They finally did it. The super-villains finally took out their nemeses, and carve out the United States into battle-ravaged territories. The Hulk, Kingpin, Doctor Doom, and Red Skull rule the country with iron fists (although not, mind you, the Iron Fist), and left to oppose them? No one.

That is until a blind Hawkeye convinces a long-retired Wolverine to leave his family and travel across the country to deliver a package. Far from an altruistic endeavor, Logan hasn’t popped his claws in years and is only helping the former Avenger for the money needed to pay tribute to his Hulked-out inbred landlords. A Mad Max-inspired buddy story within the pages of the monthly Wolverine title, Old Man Logan was one of the last stories Mark Millar wrote for the Marvel Universe and it’s a doozy. Beautifully illustrated by Steve McNiven, this post-apocalyptic tome also includes a brilliant, in-continuity use of the Spider-Buggy — worth checking the story out all in itself! 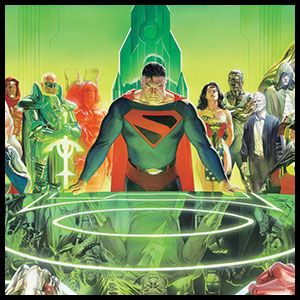 For years, the heroes of the Justice League have lived in obscurity, willing to let the next generation of much less responsible meta-humans have their run of the world. The line between hero and villain has blurred, with everyday humans paying the price for the carelessness and irresponsibility of the so-called new heroes. But when Superman returns to the world after a nuclear disaster in the Kansas heartland, order begins to return by force, despite the prophetic warnings of a Protestant minister, aided by the otherworldly Spectre.

An ode to the Silver Age of super-heroics passed through a sieve of the Book of Revelations, Kingdom Come is a grim tale of hero turning against hero and a full-on civil war that could easily destroy the world. Creators Mark Waid and (artist extraordinaire) Alex Ross deliver a bold cautionary tale against the dark age of comics, demonstrating how self-sacrifice and the belief in humility and a higher sense of morality are at the core of what it means to be a hero. 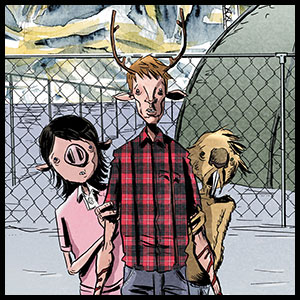 Ending its forty-issue run today (Read our review here.), Sweet Tooth is the brainchild of Jeff Lemire, writer and artist both. Set in our near future, this creator-owned series illustrates a world ravaged by plague that is destroying its entire human population, while simultaneously repopulating the world with animal-human hybrid children. Some literate but a great many feral, these hybrids are precipitated by the birth of Gus — a young boy with antlers and doe eyes — who is the key to humanity’s downfall and the beacon for what comes next. Betrayed and eventually adopted by a grisly old man named Jepperd, Gus leaves the protective cover of his woodland home to seek out answers in what is genuinely one of the most touching tales of its kind in years. Violence permeates this crumbling society, but at its center is a young boy who knows right from wrong and whose desire to do good and protect the ones he loves is infectious. Steeped in mystical legend and gorgeously drawn (and at times painted), Sweet Tooth presents quite possibly the most beautiful poetic way for the world to end.

Ultimately, we may not know how the world will end, but if it’s anything like these stories, it certainly won’t be with a whimper.

What’s your favorite end of the world story, my friends? Sound off below or hit me up on Twitter at @FotoCub!