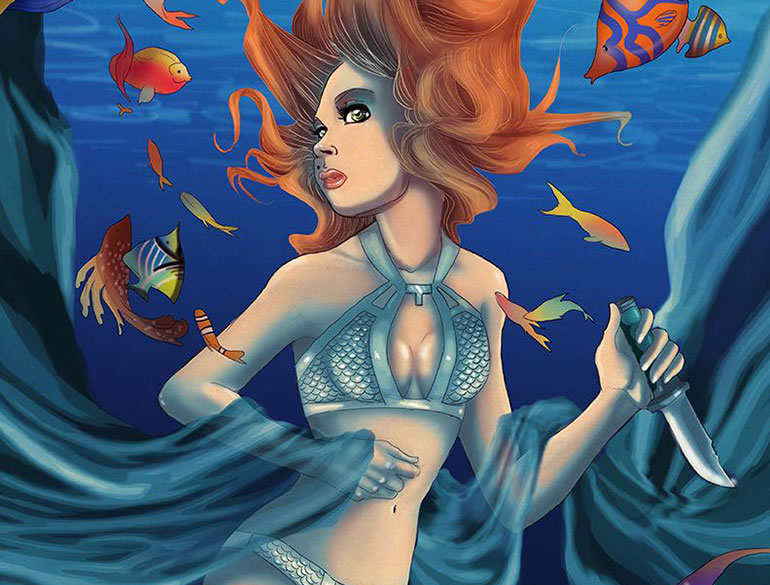 Editor’s Note: You are being treated to a guest post by successful Kickstarter creator, and writer of the indie comic book Tart, Kevin Joseph. He has wisdom to share, so please welcome him with the same gusto as you do me. Scratch that. Be nicer to him. He’s spreading comic love here. -MSG 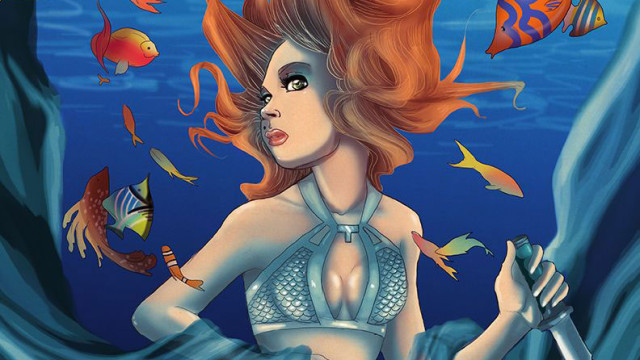 You can count us in with the lucky ones. My artist Ludovic Sallé and I were crowd-funding virgins when we set out to fund our comic Tart last year. We researched. We strategized. We prepared. Then, as with our book, we put the campaign in the hands of the public and hoped it was good enough to find an audience.

It worked. We were successfully funded and now have a large stock of Tart Volume 1 (the trade paperback collecting Tart issues 1 – 3) to help put our story in readers’ hands.

Did we do everything right? Heck no. We made numerous mistakes. None were killers, but all reduced the efficiency and/or reach of the campaign. And now that we’re planning our second campaign to print Tart #4, I’ve been thinking about those mistakes nonstop.

I figure, listing those mistakes here might achieve two goals: 1) Make it less likely we repeat them, and 2) hopefully help someone else planning their first campaign to avoid the pitfalls we fell into.

Disclaimer: our campaign was specifically Kickstarter, so issues directly related to that website may or may not apply to other crowd-funding sites.

Waiting Until We Were Ready to Run the Campaign to Set Up Our Account.

Kickstarter is very upfront that the setup process is lengthy. BELIEVE THEM!

Don’t get me wrong, I get why the process SHOULD take time. Money is going to change hands. You should be able to prove that you are who you say you are, that you have a bank account, that you have a tax ID, etc., before someone else’s hard-earned money passes through Amazon.com and into your account.

This may not seem too tough. It definitely didn’t to me. But here’s the rub: you have to prove all of these things in a specific order. If you’re having trouble finding the answer to step 2, you cannot move on to step 3. If the hitch can’t immediately be corrected, your account WILL BE frozen for the three to seven business days (not days, business days) it takes to convince Kickstarter or Amazon Payments you are on the up and up.

Thankfully, our Kickstarter account is still active. I know this because I didn’t leave it up to chance. I checked. I know that all our passwords still work and that we’re still in their records as a viable Kickstarter operator. When we’re ready to go, we go.

Not Planning the Stretch Goals.

As I said, we were very lucky. We shot out of the gate and reached our $3,000 goal in the middle of the second week. As we approached our initial goal, I realized people might start asking about stretch goals, but I refused to plan them until we’d officially beat our goal. The superstitious part of me was afraid that any hint of hubris might jinx us and the pledges would stop.

Even in hindsight, my inability to contemplate that we’d beat our goal early enough to necessitate stretch goals is understandable. We’d never crowd-funded before. We hoped to catch on, but you can never tell.

It also left us scrambling. We managed to create a series of stretch goals that were nice, but that I doubt made our backer’s rewards too much better than without them. Now I’m not arguing stretch goals are, or are not, good things. There’s literature from people much more experienced than I on both sides of that debate. What I will say is this; unless you decide you are not going to do stretch goals, plan your stretch goals.

This time we’re going to have stretch goals organized before the campaign even starts. Not because we’re cocky, but because we want a strategy that increases the quality of the finished product for both ourselves and our fans.

Our next stretch goal will be set at an amount of money that will allow us to increase our print run from 1,500 to 2,500 books. More books is obviously better for us, but we’re not forgetting our backers.

Included in this larger print run will be a Kickstarter Exclusive Cover, which we’ll deliver to each backer for free in addition to their regular cover. Two for the price of one, with one being a limited variant. 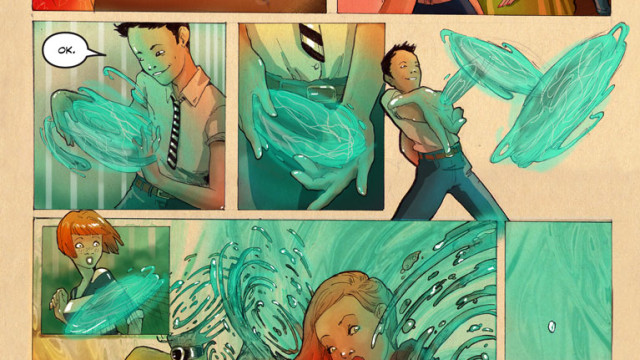 Thinking a Kickstarter Was Going To Be Like a Second Job.

I’ve heard this statement enough that I really believed it. I even used the exact verbiage to prepare my wife for how busy and distracted I’d be. We were both surprised at how much more encompassing the entire process was.

You organize your rewards as well as you can before the campaign starts. But as they say about battle, after the first shot is fired, it’s all improv.

Emails, requests for interviews, messages asking to combine reward tiers… If you want your campaign to be as successful as possible, you must find time to answer every question. You won’t be able to say yes to everything. That’s okay, but you’d better be able to supply a satisfying answer. If you can’t say yes, you need to find a way to pivot the conversation to what you can accommodate. COMMUNICATION is the key to Kickstarter.

So, a Kickstarter is not like a second job. It’s more like operating the grand opening of a 24-hour diner, all while the rest of your life continues to demand your attention.

What We’re Doing Differently this Time

I’m already trying to create a time budget for myself. Give myself an hour to answer questions in the morning. 45 minutes to exercise (I eat terribly when I’m stressed). Then work.

Throughout the day, I’ll use Buffer to schedule reminder tweets, and answer what I can. But in the evening, I’m going to force myself to put the phone down for 2 hours and just be in the moment with my family. Then when they’re to bed, I’ll make certain all questions are answered.

Even I don’t believe I’ll follow through on this one, but it’s a beautiful lie I’m telling myself.

The Prints. Oh Lord, the Prints.

Remember when I said I didn’t plan out our stretch goals. This one is completely due to that (oh and me being a moron. Can’t forget that part). When we were creating stretch goals out of thin air, we chose to create a free print that was exclusive to the Kickstarter. Of all the mistakes I list today, this is the one that irks me the most because it was SO PREVENTABLE.

Nearly every decision I made in the pre-planning of the Kickstarter was to make sure that what we mailed would be equal in size or smaller than the actual book we were sending. I didn’t want anything to add to the shipping cost.

And then I ordered 150 prints too large for the envelopes I’d purchased, which would be bent terribly if placed up against our book. Do yourself a favor friends, stop and think before every decision you make during your Kickstarter.

The only way to keep from making a blunder like this is to remember to recheck the dimensions of what we’re doing before I order anything. To think before I speak. To know – as opposed to guess.

We’ll see if I can keep this advice.

Feeling Bad About How Much I Charged for International Shipping.

When I added $20 to ship internationally, I really did feel weird about it. Then, I received some well-meaning emails questioning why it was so much. I felt terrible.

When it was finally time to ship rewards, I sat down to fill out the customs forms, which are time-consuming and tedious. Then I saw the amount I’d have to pay for tracked shipping (over $30 to Canada, more EVERYWHERE else). I will never feel bad about charging too much to ship internationally again.

An aside to international backers: Please don’t take that as an insult. One of the things we were proudest of is that we found readers in countries as diverse as Germany, Singapore, Australia, Belgium and more. So please keep backing, just understand why you pay so dang much more than those stateside.

I’ll actually be boosting the price for international shipping to $23 for this campaign. And when asked why, I can truthfully say that the average price I paid was over $30 to ship (yes, even to Canada). I don’t have to ask for the full $30, as I assume about $7 of every tier price will go to shipping anyway.

I’ll lose some international sales due to this. We lost sales due to it in the first campaign. But I won’t feel bad. I’ll know I’m just charging what I’d have to spend to ship it anyway. 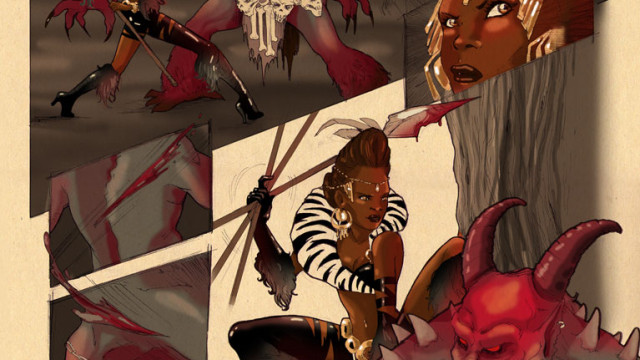 My friend Juan Navarro at Creature Entertainment helped make this a tiny mistake instead of a huge one. He advised me to add a month to how long I thought it would be before I delivered the books. So I did.

Having lived through the experience I should have added 2 months. The delivery process is hectic, at best. At worst, it can be nearly overwhelming.

What We’re Doing Differently This Time.

All I need to remember is this: No one has EVER complained that a Kickstarter reward arrived too early.

I really didn’t know how to approach the comic media before our first Kickstarter to let them know we were coming. As wonderful as our campaign went, I often wonder how well it might have come off if we could have gotten some more media buzz around our project before Day 1?

After Ludovic and I finish most of the Kickstarter page, I’ll be contacting bloggers, podcasters and news sites who have reviewed Tart to let them know we’re about to be up and running and offer any news/access they’d like before we go live.

Oh, and I’ll write up an article on the mistakes we made in the first Kickstarter and what we learned from them, and I’ll submit it to Comicosity in the hopes they think their readers would be interested. That way I can help others embarking on this adventure and also be able to tell people the Tart #4 Kickstarter goes live Wednesday, July 9th.

Oh wait, don’t have to do that now.

There were plenty of other mistakes, but these are the ones that I felt were the most universal. I hope reading these can help others planning a campaign avoid the problems we inflicted on ourselves.

For now, I’ll wade into the campaign with my eyes open and my mind set on not repeating these mistakes. I prefer to make new and interesting ones!!!