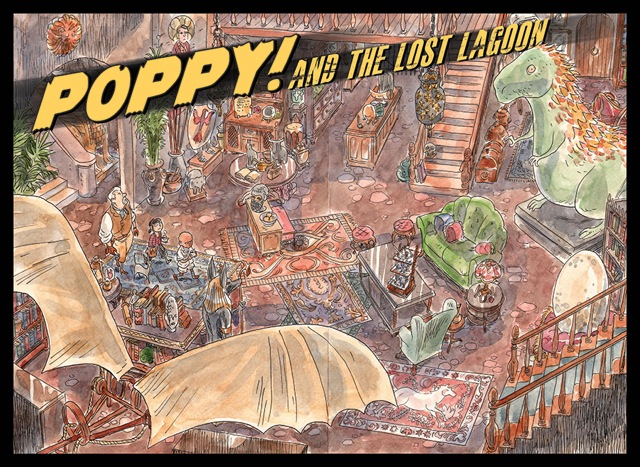 Dark Horse Comics has announced an original graphic novel, Poppy! and the Lost Lagoon, by Matt Kindt and Brian Hurtt. 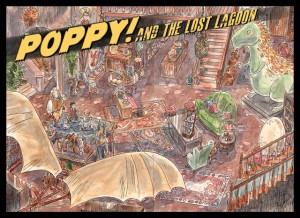 MILWAUKIE, OR, DECEMBER 23—Matt Kindt, the award-winning, New York Times best-selling author of MIND MGMT and Red Handed, and Brian Hurtt, the award-winning, New York Times best-selling artist of The Sixth Gun and The Damned, are soon to publish Poppy! and the Lost Lagoon, the first in a new graphic novel series for children. The book follows the story of Poppy Pepperton, a ten-year-old girl with a typographic memory who goes on globe-spanning adventures with her sidekick Colt Winchester (who thinks he’s her legal guardian). Publishers Weekly announced last week that Poppy! and the Lost Lagoon will be published in 2015 by Dark Horse Comics.

When Poppy is summoned by Ramses MV, a reincarnated Egyptian king now cursed to remain in his lavish Manhattan penthouse (long story), she knows to expect something strange. Ramses doesn’t disappoint! He shows her Mummy Mouth, a shrunken mummy head that speaks a riddle once a year. Mummy Mouth gives her a clue that sends Poppy, Colt, and Ramses’s cat Krums to Old Macadamia to investigate the Lost Lagoon and an ancient civilization that lived on the back of a gigantipus (a giant octopus). Along the way she will find mysteries, adventures, friends, and family in the unlikeliest of ways. But a sinister robot is dogging their steps—is it programmed to help them or to stop them from learning an ancient secret?

“It’s been so exciting to see Matt thrive at Dark Horse, and I’m thrilled that he’s continuing that relationship with Poppy! and the Lost Lagoon,” said Dark Horse editor Brendan Wright. “He and Brian are bringing just the right light touch and level of imaginative detail to make a truly fun children’s book. It’s hard to believe this is their first graphic novel in the genre!”

Matt Kindt is the New York Times best-selling and Harvey Award–winning writer and artist of the comics and graphic novels MIND MGMT, Red Handed, Revolver, 3 Story, Super Spy, 2 Sisters, and Pistolwhip. Brian Hurtt is the New York Times best-selling artist of the hit fantasy-western series The Sixth Gun. He burst onto the comic scene with the second arc in Greg Rucka’s critically acclaimed series Queen & Country and has since worked on the Queen & Country spinoff Declassified, Skinwalker, and DC’s critically acclaimed Gotham Central, as well as the DC series Hard Time and The Damned. Both authors live and work in the St. Louis metro area.