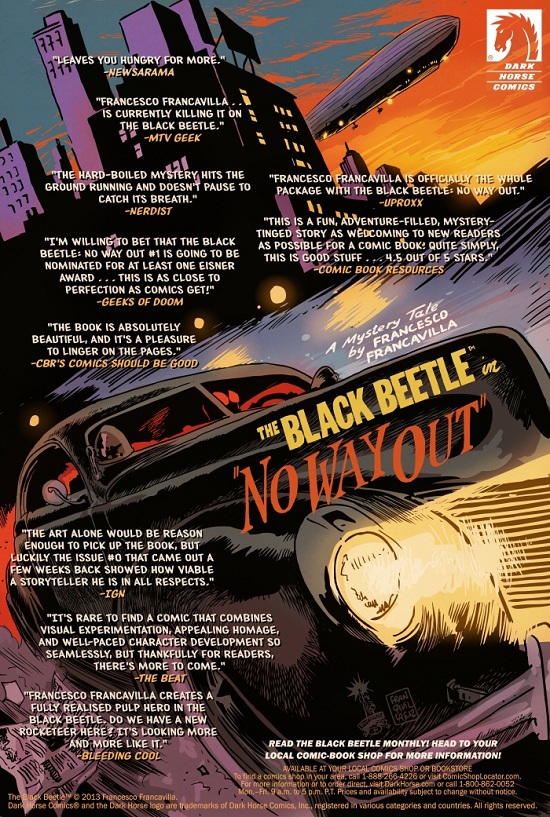 Dark Horse Comics has announced a first issue sell out for Francesco Francavilla’s The Black Beetle. 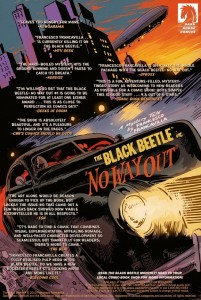 FEBRUARY 4, MILWAUKIE, OR–The response has been unanimous! Eisner Award–winning artist Francesco Francavilla’s new series at Dark Horse is already being called one of the year’s best! Francavilla’s pulp sensation, The Black Beetle: No Way Out, has received overwhelming praise from media, retailers, and fans around the country!

As of today, just two weeks before the release of the series’ second issue, Diamond Comic Distributors has completely sold out of issue #1, and Dark Horse will be transferring stock from other channels to ensure retailers can capitalize on the series’ success!

This new series introduces the mob-busting costumed supersleuth as he investigates a bombing that has killed off some of Colt City’s notorious criminals! Steeped in pulp noir with modern sensibility, this is one new series you need to read!

Praise for the first issue:

“Any pulp and classic noir fan will tell you, there are only a handful of books out on the market that really do the job. An original concept likeThe Black Beetle will surely give fans of the genre something to cheer for. It’s been a long time coming for this title and it was worth the wait. 10 out of 10.”—Newsarama

“This is a fun, adventure-filled, mystery-tinged story as welcoming to new readers as possible for a comic book. Quite simply, this is good stuff. I may not be the biggest fan of pulp adventures, but I am a self-proclaimed fan of all things good and this is very good indeed. Hopefully, as promised in the text piece at the back of this issue, this is just the beginning. I, for one, cannot wait to get more.”—Comic Book Resources

“The Black Beetle #1 is one of the most exhilarating, stunning superhero comics on the stands . . . This miniseries presents a high-stakes mystery realized through Francavilla’s intensely graphic style, full of innovative layouts and spectacular splash pages.”—The Onion A.V. Club

Retailers, The Black Beetle #1 is available for reorder in limited quantities now.

Fans, make sure to grab your copy while you can! Look for The Black Beetle: No Way Out #2 at your local comic shop on February 20, featuring the attached new art!