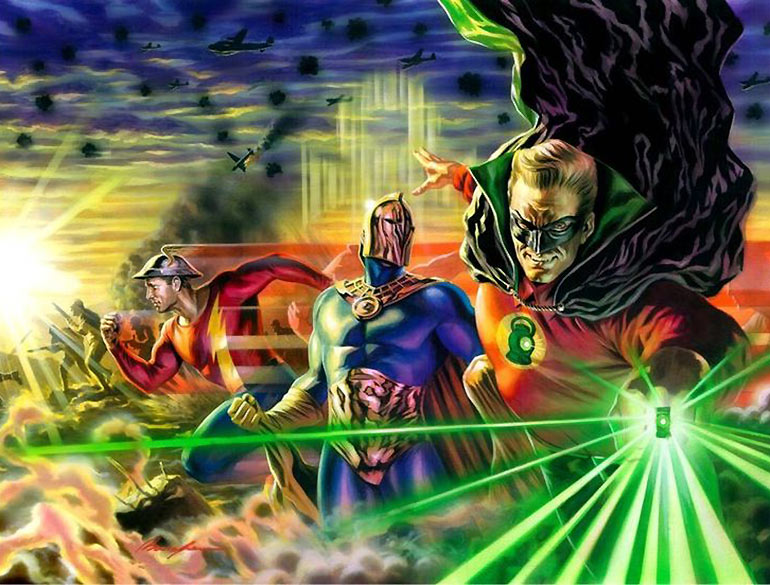 It was only a few short years ago I was wondering if having the origin of the Justice Society of America placed in World War II fighting the Nazi regime was still pertinent enough for today’s reader. I wish the answer had been no.

With hate crimes at their highest level in America since 9/11 and the alt-right (white supremacists and Neo-Nazis) intimately involved in the building of the next Presidential cabinet, the arrival of a new Justice Society of America — formed to take out the exact same forces the original fought — is needed more than ever.

What follows are the first three of six teams Comicosity staff put together to lead the resistance and take our country back from the brink of a greater xenophobic, racist, and misogynistic danger than we’ve seen in a generation. 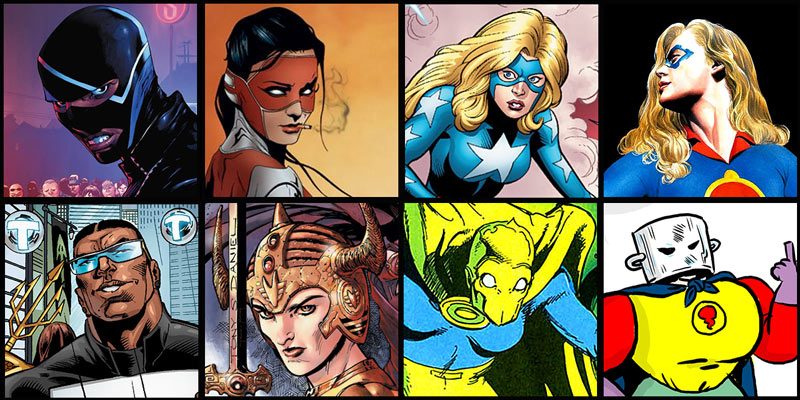 My team is heavy on legacy, though not all of that legacy derives specifically from the JSA, or even the Golden Age. I feel that speaks to the idea that they’re engaged in an ongoing struggle against fascism and intolerance that we were naive to believe was over.

This is Donny Fairchild, the new Vigilante presently being introduced in Vigilante: Southland, a miniseries I’ve been thoroughly enjoying. I imagine, with the way that series is going, Donny will be fully woken up to social injustice and the need to fight against it by the end. But if he isn’t fully woke already, a Trump presidency and the rise of the alt-right sure as heck will get him there.

If the JSA’s going to fight the alt-right, they need to be prepared not just for warfare, but lawfare. Who better to fight back against litigious billionaire financiers than successful attorney Kate Spencer? And bonus: She’s a legacy character.

Can’t have a JSA without Star-Spangled Kid/Stargirl, but I’d like to make one twist: In keeping with being based on creator Geoff Johns’ sister, this Courtney Whitmore is Lebanese-American. The JSA could use an optimistic, enthusiastic kid who, not coincidentally, also sends a message that diversity is American.

I would go with the version we saw in Futures End, the Michael Holt who’s founder and CEO of a black-owned, black-run consumer tech giant. Nobody in the DCU knows technology like Mister Terrific, and Holt would be invaluable fighting the Russian hackers and twitter trolls that make up the Alt Right rank-and-file.

I’m going with Libby Lawrence because she was a broadcast journalist. The Liberty Belle in today’s JSA is a young broadcast journalist who’s equally disgusted by the right wing media and the mainstream media that wants to give the Alt Right equal time, creating false equivalence between fascism and freedom. Imagine Rachel Maddow or Joy-Ann Reid with super strength derived from the Liberty Bell.

This is the Morrison-inspired New 52 version, who is trans/genderqueer. Sir Ystin’s lost in time, and they’re none too pleased to discover America has a dictator who wants to restore medieval views on gender and sexuality.

I agonized over whether to pick Khalid Nassour or Inza Nelson. Then I realized I don’t have to choose! J.M. DeMatteis’ run on Doctor Fate in the late 80s established that Doctor Fate works best as a hybrid hero, with two people merge to become the Doctor. So why not a mix of Paul Levitz’s Egyptian-American med student Doctor Fate, Khalid Nassour, and William Messner-Loebs’ relatable, anti-gentrification activist Doctor Fate, Inza Nelson? And even better, Inza has relevant work experience: Her first story arc in Loebs’ run pitted her against a thinly-veiled Donald Trump analog.

It just isn’t the JSA without Ma Hunkel. And Ma didn’t help win World War II just to watch a bunch of Nazis sneak in through the back door! 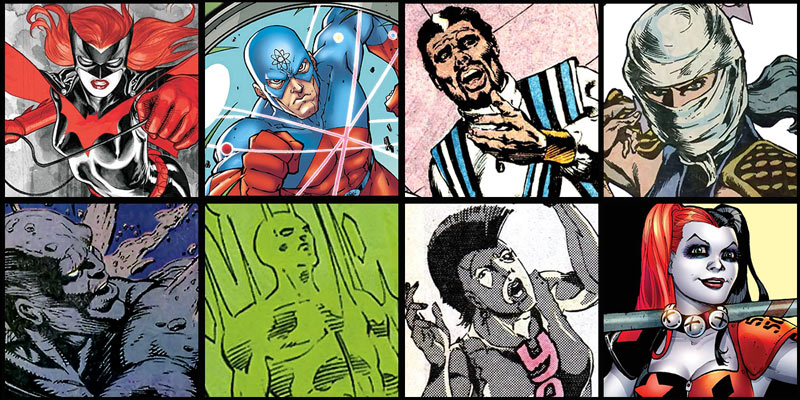 It may be because I’m Jewish, but I have a bias for narratives about Jews winning against Nazis. From Inglorious Bastards to Defiance, I love a good narrative about it. So, when I thought about this list, I thought: Why not an all Jewish JSA? So here are my picks for my very own JSA against the Alt-Right!

Who better to lead a team than a Bat? Kate Kane is not only a well-developed and interesting character, but she’s someone I feel would step up to the daunting task of team leader. Heck, I think she’d be someone who could form this JSA, bring all of these people together towards this one goal.

Ray Palmer’s super genius skills and scientific abilities would be perfect for such a team. He would also be the moral compass of the group, making sure that they all don’t choose shadier tactics while defeating Neo-Nazis.

The Hayoth may usually be a special task force within the Mossad, but they’ve colluded with Amanda Waller before, so I don’t see why they wouldn’t join a Justice Society of America if it meant beating up some Neo-Nazis.

The Hayoth is composed of four members:

Moyshe Nakhman, otherwise known as Golem due to the fact that his body is that of a literal Golem.

Dybbuk, also known as Lenny, an artificial intelligence created by Israel and married to an American ex-supervillain. He has technopathic capabilities.

These four would be essential choices for the sort of JSA I want.

Ifrit may be the ex-supervillain Mindboggler, but after her time on the Suicide Squad and her subsequent marriage to Dybbuk, I’d say Leah Wasserman has given up her assassin ways and would definitely be down to help her husband in killing a few Neo-Nazis. With the ability to impose emotions and illusions on her victims, she would be a great asset to the team.

The most high profile and probably little well-known for being Jewish character of them all, Harley Quinn would definitely be down for kicking Neo-Nazi butt. She’s fun, she’s insane, and she’d give the team an edge of unpredictability.

This would be the most baddass Jewish comic character task force you could possibly make out of the DC characters out there at the moment. They would definitely destroy any Neo-Nazi organization that dared cross them, that’s for sure! 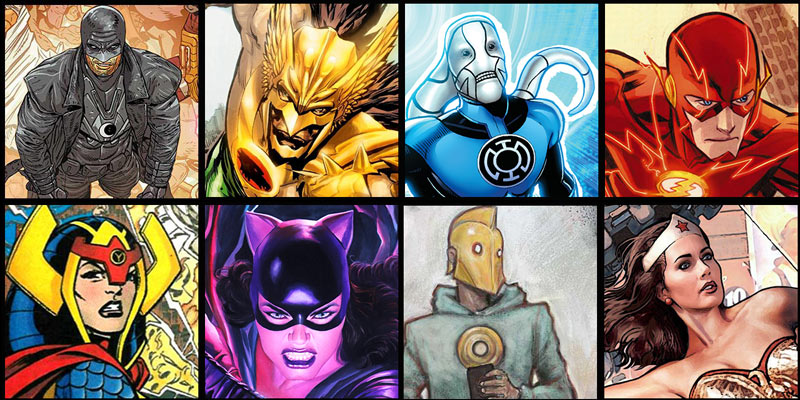 While this group does not resemble a “traditional” JSA, these people would be good at fighting Nazis, and that’s really all I was concerned about when I started assembling this crew.

There is no character better suited to lead a group of people that are out to beat the shit out of today’s modern Nazis than Midnighter. He’s DC’s Logan, the character that will do what needs to be done to get the job done, and he’d lead this crew brilliantly.

He’d be Midnighter’s Nazi punchin’ bro with a mace, and I do believe every team needs a hammer being thrown around….so I’ll settle for a mace this time. Hawkman’s got the JSA legacy deal happening and he’s a gritty warrior that fits in with this crowd.

Punching Nazis is important on this team, but the team also has to be tempered by a font of overwhelming hope to balance the hate that these asshole Nazis are spewing. That font is Saint Walker. He’s also plenty powerful to boot.

Barry’s on the team for similar reasons to Saint Walker, but also because having a speedster on the team never hurt anyone. Between Saint Walker, Barry and the last member in my list, this team has a moral core to go along with the badasses who won’t hesitate to swing hard.

Speaking of swinging hard, Big Barda’s on the team. Her roots and kickass powerfulness make her a great Nazi smasher. I’d love to see her smashing idiots alongside Hawkman, Midnighter and the big gun that rounds out this list.

Selina has always toed the line of stone cold villain and thief with a conscience. If Tom King’s recent revelations in Batman are reality for the character, then this team has a member that is a force to be reckoned with. She may be difficult to trust, but she would be highly capable and would be intensely focused on this foe.

I’ve stated before that I think every team should have a magic option to deal with mystical threats and Khalid Nassour is the one for the job here. There’s the JSA legacy connection with the mantle, and he’s got power to spare.

The third component of the moral core of the team with Walker and Flash, Wonder Woman is everything that the far right Nazis are not. She is literally the antithesis to everything they believe in and she’s a key member of this force.

Tune back in tomorrow for a second set of three JSA rosters for a new age of anti-authoritarian kick-assery.