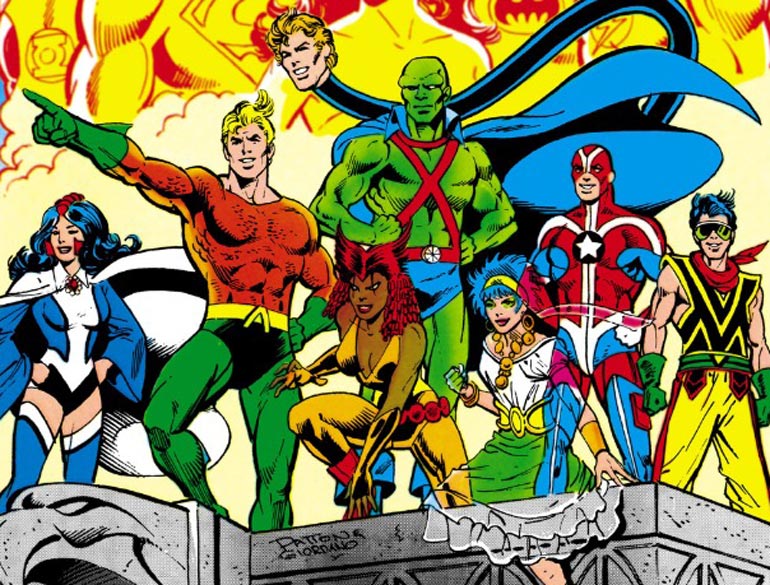 If you missed part one or part two, check those out now. But if you’re raring to go, here are the next three teams of our dreams: 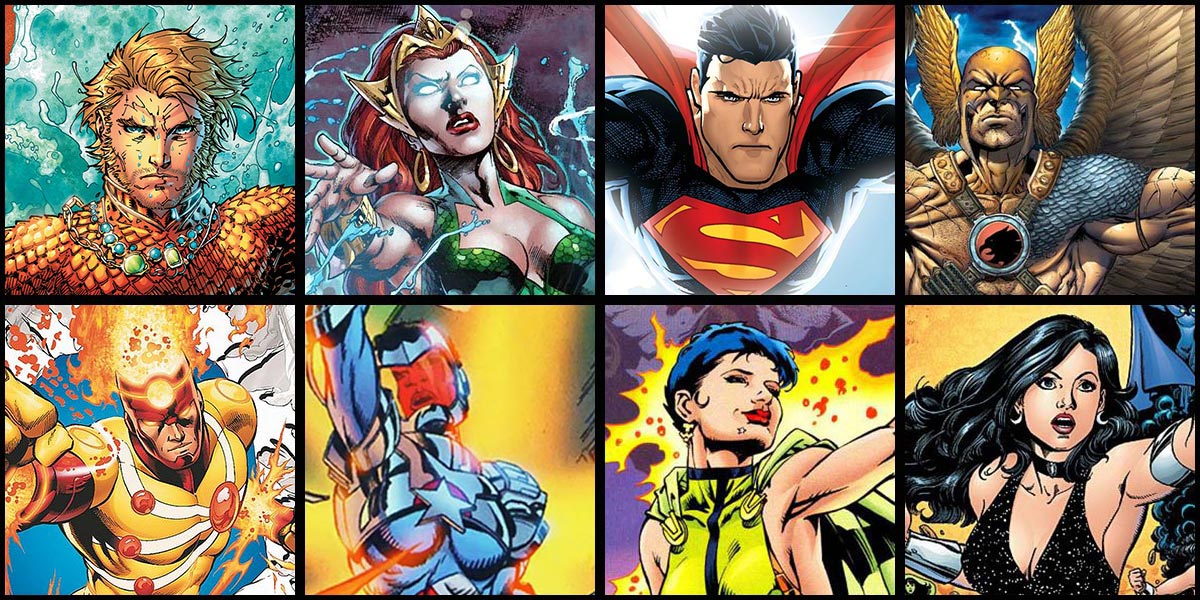 When Comicosity issued the JLA challenge to its staff, my first instinct was to go with a roster I had dreamed up a few years back as a response to a column on It’s a Dan’s — an exercise in roster assembly itself.

Aquaman is the first superhero I distinctly recall trying to emulate. As a boy, during swim lessons I would swim with my arms outstretched, feverishly just kicking my legs to go forward. This exasperated my teacher, who told me to use my arms. He asked me why I was swimming like that and not even trying to use my arms. “It’s how Aquaman swims,” was my reply. After a couple minutes working exclusively with the other kids (I now realize I wore him out) he came back and we agreed to try to work some arms into it, to be “better than Aquaman.”

At the time I compiled this roster, Mera was criminally underused. This was before the New 52. Heck, it might have even been before 52. At any rate, I’m a big fan of heroes in committed relationships. Hawkman and Hawkwoman (the Thanagarians) remain among my favorite characters ever — not individually, but together. So I figured, “Why not put a different married couple in the Justice League?”

Superman carries waaaaaaaay too big a profile not to include. My League was not going to have Batman. No Wonder Woman either, so I thought I should add someone who is recognizable and noteworthy. Enter Kal-El. And, in this case, he’s actually the leader of the League. In my original take, Aquaman is the leader, but I can see Arthur taking a step back and being part of the group for the sheer justice of it all.

I already mentioned an affinity for Hawkman and Hawkwoman, right? So let’s swing the mace and flap the wings for Katar Hol joining the Justice League once more. Straps aren’t just an accessory, they’re a signature look for my Justice League. Hawkman’s got ’em, and he brings a visual that simply cannot be denied.

Speaking of undeniable visuals, Firestorm always makes the grade for me. One of the centerpieces of my first ever JLA comic (Justice League of America #192, thank you), Firestorm is another one of my favorite characters. And the final piece in this roster that might have you lovely readers realizing that, yes, the lineup in Brightest Day truly was one of my favorite collections of characters. Ever.

Skyrocket comes over to my League after languishing on the limbo bench now that Power Company has all but disappeared from the DC Universe. Kurt Busiek brought the Power Company to the DC Universe fully formed, and I enjoyed the heck out of that book. I still do. It’s nearly criminal that nothing has been done with the characters since, and Skyrocket seems the most adept to make the leap to another team.

Tomorrow Woman was first introduced in the pages of Grant Morrison’s JLA and she went straight to my heart. A collaboration between Professor Anthony Ivo and T.O. Morrow, Tomorrow Woman was created to destroy the Justice League, much like her android ancestors Red Tornado and Amazo. Tomorrow Woman, however, evolved and developed a conscience and feelings. This eventually led her to make the ultimate sacrifice, giving up her existence to preserve the JLA.

Donna Troy, the star-spangled Troia from Devin Grayson’s all-but-forgotten run on Titans rounds out my JLA of then. She wasn’t the last I added to my roster, but digging from memory, she’s the last I could remember. I loved her visual, even if I couldn’t pull it off so good in my own drawings.

So there you have it: my Justice League

But that’s not all from Doug… 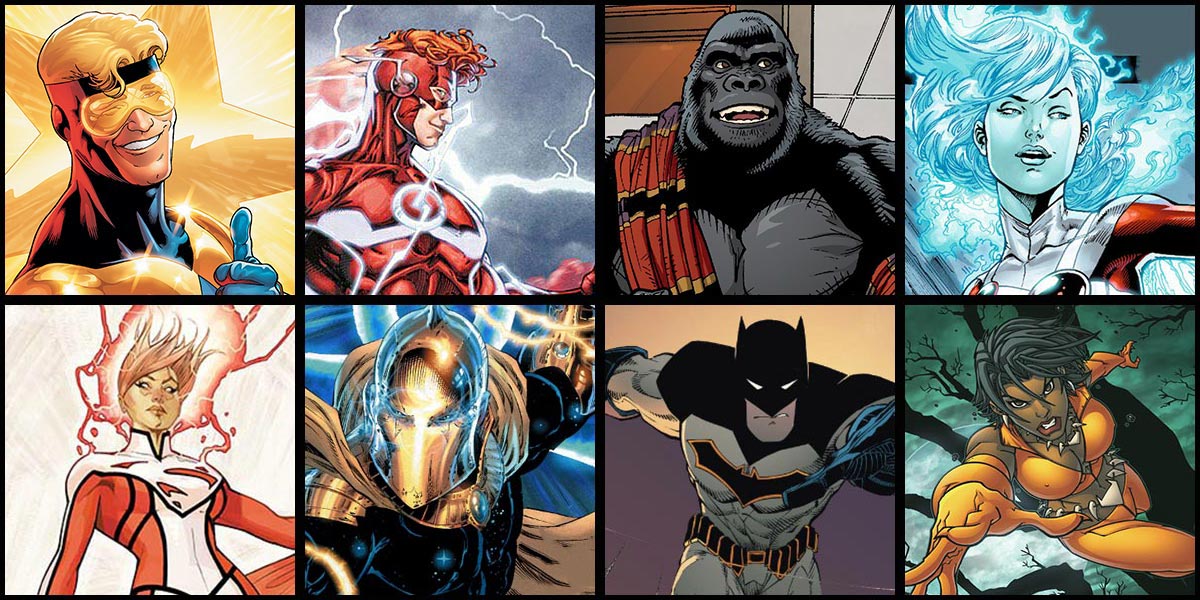 The GREATEST heroes ever assembled. That’s what they were told they were by the man who now leads them. That man is Booster Gold, and he has traveled through time to bring the JLA together.

No longer comedic relief, has embraced his destiny and has assembled a JLA to fight the good fight one more time. These are the greatest heroes of all time, and Booster is leading them.

Wally West. After taking up the mantle of his fallen mentor, Wally West became THE Flash. Wally never hesitates to run into the fray, frequently leading the rest of the DC Universe in the charge. A leader through action, Wally is the very best of what the JLA should be.

A denizen of Gorilla City fighting alongside the Scarlet Speedster is filled with visual pop, and adding Solovar to the League is a move that should have been done long before James Robinson added Congorilla to his League. Solovar in this case would younger than he was represented in Crisis on Infinite Earths.

Wielding nuclear power and the determination to use it, Loraine Reilly is one of the JLA’s heavy hitters. Oh yeah, she also happens to be Booster Gold’s ex-girlfriend.

Khalid Ben-Hassin of Earth 2 donned the helm of Nabu and became the greatest Doctor Fate to ever wield magic. At least that’s how the story goes in Booster’s history book.

Lana Lang gained superpowers and became so much more than she ever imagined she could be. While her story has yet to unfold in our time, Booster has seen what she can do and knows she belongs in the League.

Bruce Wayne’s parents were slain in front of him, he vowed to right wrongs and to stamp out crime. He’s also led quite a few teams, but he knows Booster Gold is the best man for the job this time.

Mari Jiwe McCabe uses the power of the Tantu Totem to summon the abilities of the entire animal kingdom. The best thing to come out of the JL Detroit, Mari predates that iteration of the League. She’s been a member of several Leagues, and will prove to be the anchor of this JLA.

There you have it, the JLA. Some familiar faces, some fan favorites, some totally bizarre blends of character and personality, but definitely DC. 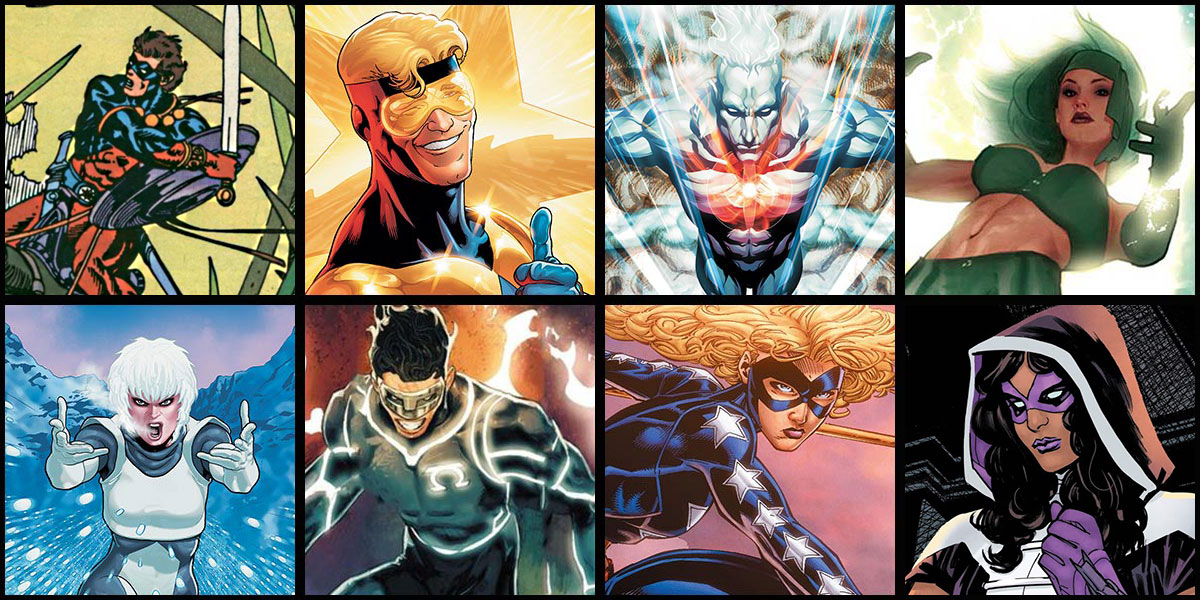 I do not play the Roster Game as much as others because I find I usually end up with some variation of the 80s/early 90s Justice League International, so I was going to skip this round of Comicosity fun.

However, it occurred to me that many of the other contributors were either not born or were babes-in-arms when the original JLI shuffled off the new comic rack in early 1992. Everything old is new again! Rebirth: Justice League International!

The JLI returned in the first year of the New 52 as more of a riff on the Global Guardians, so I thought I would approach this as a Rebirth take on a classic.

The 9th member of the original Justice League and a veteran of several iterations (though not the JLI), Ray Palmer brings a lot to the table. I would include some elements from Ray’s swashbuckling days of Sword of the Atom. Add in that he has some New 52 connections from Frankenstein: Agent of SHADE, and Palmer offers up great added value. (Just don’t invite his ex-wife over, that’s more trouble than it’s worth).

For anyone who knows me, this is the least surprising of all surprising things. Booster is also a JL veteran and only one of two on my list to be on a version of the team since the New 52 reboot. It would be great to bring in Ted as a guest star, but Booster has more often been a hero outside of that old partnership.

In the old Embassy days of the JLI, Nathaniel Adam was the leader of the JLI. He exited the team when he (almost) became Monarch in the later days of JLI: Breakdowns. Captain Atom wasn’t the best handled in the New 52, in my opinion, so I would love to get him back on track as the high-powered muscle of a team.

The friendship and dynamics of Fire and Ice were a mainstay of the original JLI. They brought friendship and love to a funny book, and both were fish-out-of-water in radically different ways. Their powers both compliment and balance each other.

I am not a fan of the “Big 7” approach to the Justice League. Like The Avengers, I have never been that interested in teams made up of characters who already have books of their own. As such, I am rolling in a few characters who represent the “Best of DC You” who haven’t yet landed in Rebirth books.

Fresh off the best-selling (trade paperback collection) The Omega Men, Kyle Rayner has been MIA in Rebirth and it’s time to get him ring-slinging again.

With nary a StarMAN in sight, the torch is carried by this teenage hero who is already a veteran of three Justice League teams in the New 52 (JLA, JLCanada, and the short-lived revolving-cast DC You JLU). Stargirl would have an interesting place in this line up given that she is the youngest but also most experienced member.

Another DCYou highlight was Grayson and the newly un-re-re-rebooted Helena Bertinelli is both a fresh character and a JLI alumni! *Editor’s Note: It was pointed out to Keith that Huntress is currently appearing in Batgirl and the Birds of Prey but all he said was Bwah-ha-ha-ha-ha-ha!”

With this cast, the Justice League could focus on character development instead of the crashy-smashy that often comes with a cast of characters whose stories are more fully happening in other books.

Tune back in tomorrow for the last three rosters from Comicosity — this time solely from Senior Editor Matt Santori. Think you’ve seen the depth of his JLA mania? Just wait.