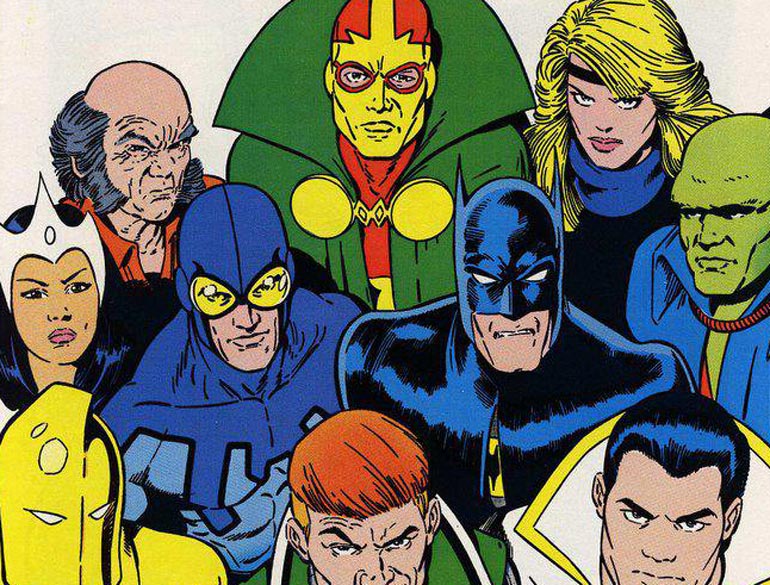 And no staff member is more in the center of that tizzy than Senior Editor Matt Santori, proud owner of every Justice League comic ever published (major guest appearances too) and overall sufferer of JLAOCD.

If you missed part one, part two, or part three, check those out now. But if you’re ready to wrap this baby up, here are the last three teams of our dreams, all popped out of one man’s neurotic head: 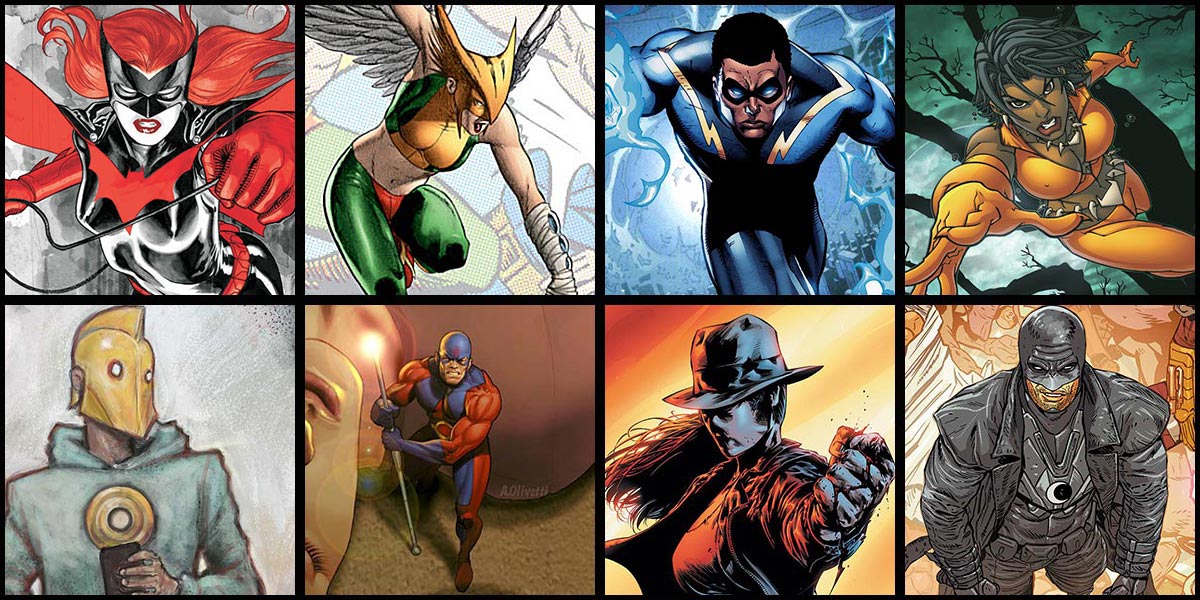 Coming up with an eight-person team that can match the iconic stature of the roster featured in sister title Justice League is no small feat. You never want to feel like a second team is less-than, and that’s very tricky thing to balance when your first team already snatched away Superman, Batman, Wonder Woman, the Flash, and TWO Green Lanterns.

But in thinking about what the difference between a “just plain Justice League” and a Justice League OF AMERICA could be, the answer sits there, staring you in the face.

A Justice League of America should LOOK like America.

With a 50/50 male/female split, three queer members, and a racial breakdown of two white heroes, two Black heroes, two Latina heroes, one each of Asian and Arab descent, this JLA roster isn’t the be-all and end-all of American representation — but it gets a hell of a lot closer than most.

And every member has a pedigree or iconic nature to their status that can stand up to Justice League-level scrutiny.

As much as I am reluctant to include analogues for pre-existing members of the Justice League, Batwoman has more than proven herself an equal to the Dark Knight. We’ve seen her take center stage in Detective Comics. It’s time to broaden her scope in the DC Universe.

Kendra Saunders (or is it also Munoz-Sanders on prime Earth?) was a key element of what made Hawkgirl unique and compelling for an entirely new generation. Her absence in the DC Universe proper is a problem that should be fixed, STAT. And what better way than to bring a Hawkgirl back to the pantheon of the Justice League?

There is no more ethical and thoughtful man in super-heroing than Jeff Pierce. While he was briefly a member during the post-52 years of the JLA, his permanent rise to the big Leagues is overdue by decades. The unassailable conscience for the team, Black Lightning would be a leader to rival Superman in smarts, heart, and soul.

Another past Leaguer whose time with the team was cut short again and again, Mari Jiwe McCabe is DC’s preeminent Black super-heroine — and she’s rarely to be found. A powerhouse now on television, Vixen is poised for a significant comeback and a reclamation of her rightful place in the JLA.

Khalid Nassour is far and away one of the biggest success stories of the DCYou publishing initiative, reenergizing the idea of a Middle Eastern sorcerer with a young man of actual Middle Eastern descent. Young and powerful with a lot to learn, Doctor Fate could easily be the new JLA’s rookie to watch out for.

A fish out of water among gods to be sure, Renee Montoya redonning the faceless mask of the Question is without a doubt at the insistence of ex-girlfriend Batwoman. But what Renee doesn’t realize is that she’s more suited at saving the world than she ever dreamed.

The hardcore fighter with a trick up his sleeve for every occasion, Midnighter may be the hero Black Lightning would trust the least, but he would seem to be on everyone else’s good side almost immediately. Appealing to the warrior in Hawkgirl, the military precision of Batwoman, and the fierce fighter in Vixen, Midnighter is a big hit with the ladies of the Justice League. And having his sweet beau Apollo around from time to time doesn’t hurt either.

And now, for something completely different… 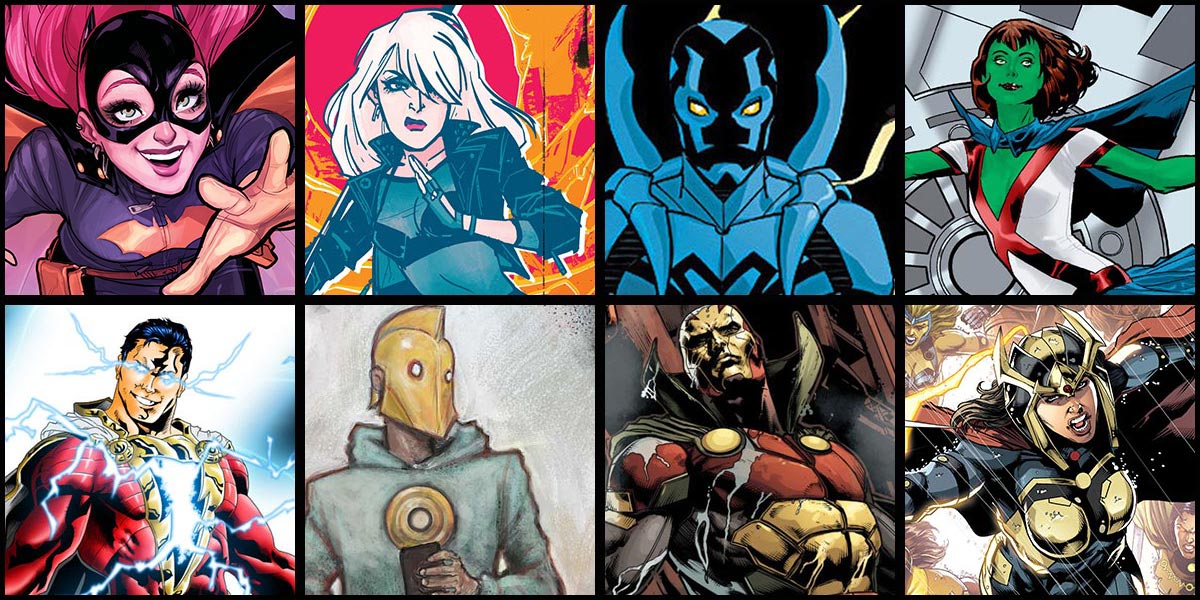 There have been A LOT of comic books who have tried to recapture the magic of the classic Giffen/DeMatteis Justice League International, but few have started in the same place those gentlemen did — with a book that combines serious super-heroing with sly humor.

Before there was Booster Gold, before there were Fire and Ice, the Justice League rose out of the Legends series with a much more diverse team in terms of genres, origins, and even publishing houses. Going back to THAT template for a new Justice League America — with a few new relationship twists — could be the version that clicks.

Straight from their partnership in the Birds of Prey, Babs and Dinah are the perfect pair to wrangle some relatively new heroes into shape — and have a few laughs along the way.

As Jaime Reyes continues to grow into his role as the Blue Beetle, his need for colleagues who can back his play is going to get bigger and bigger. Forget the Teen Titans. A Justice League America with pal Doctor Fate (think “new Blue and the Gold”) and alien tech genius Mr. Miracle could be just the trick to keeping his control of the scarab above board.

Martian Manhunter may have been the dour straight man standing against the wacky antics of the Justice League International, but Megan Morse isn’t about to miss out on the good-natured fun — even if it means pissing Black Canary off once in a while. Gulp.

A boy in a man’s body with powers that could rival Superman’s, Billy Batson is just learning how to be a hero, so training under Batgirl and Black Canary, and alongside other young heroes, is exactly what he needs to harness the true power of Shazam.

Another boy inside a man’s body — but not quite in the same way — Khalid Nassour still has a lot to learn about being a mage and an adult. But he’s trying, really hard.

A bit less down-to-earth than we remember Scott Free, Mr. Miracle is the Multiverse’s consummate escape artist — but he didn’t get there easily. A student of nearly every form of technology, Scott is the team’s resident genius, even if friendship and heroics are all a bit alien to him still.

What? No Guy Gardner? No hardcore angry hero ready to do whatever it takes to take charge? Ha. Guy Gardner has nothing on Big Barda. You think Batman and Guy butted heads. Just wait until you see Babs and Barda go toe-to-toe.

Wait… one more idea. And this one is a doozy… 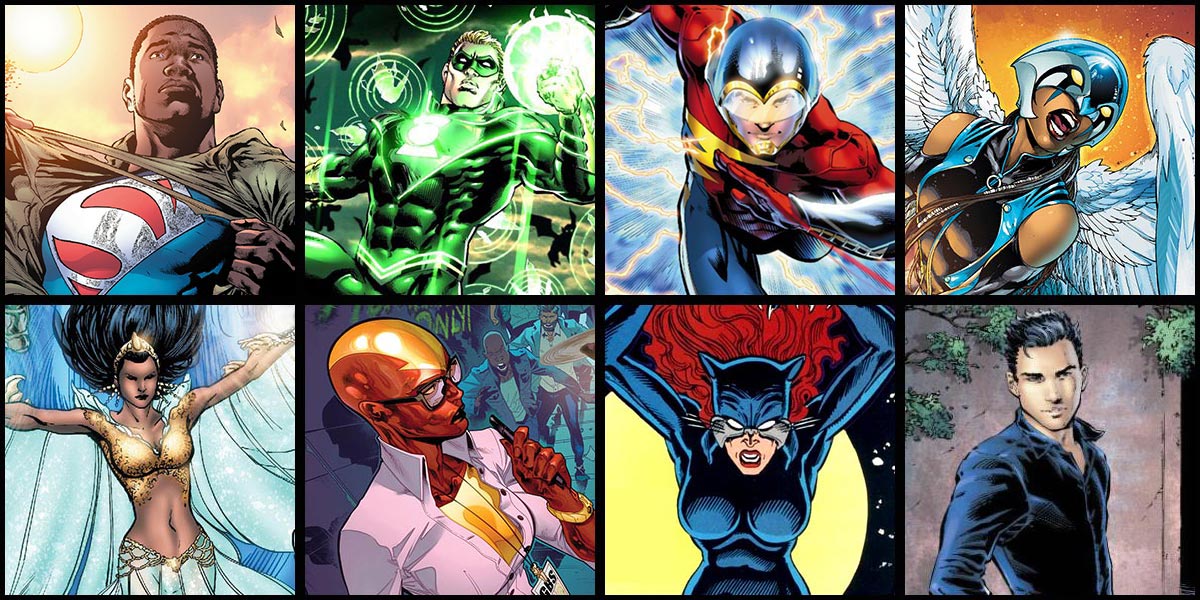 Today, there’s barely anything left to salvage. But like the Ultimate Universe over at Marvel, there’s real potential in cherry-picking out some of the finer examples of character work and difference between that world and the world we read in Justice League every other week.

A new Justice League of America, formed from the ashes of Earth 2 expatriates adapting to another new world (only this time, without any of their civilization having survived), could be just the trick to focus back in on character nuance and what made these versions of Golden Age heroes click.

It also accomplishes two very important goals — it keeps the members of the premier super-hero team ultra-iconic, and it produces a team that looks and feels like America, racially, sexually, and in gender balance.

One of four final survivors of the Krypton from the universe of Earth 2, Val Zod spent most of his childhood in isolation. Today he remains a reluctant Superman, but one who feels the need to live up to his legacy and face his fears on a daily basis.

Alan Scott lost the love of his life early on, and gained immeasurable power in the process. It’s time to see some wrongs righted at last, however. As the Green Lantern arrives in an entirely new universe, the spirit of Sam is inevitably pulled along. And as Alan’s powers change in a new universe with new physical laws, so too does Sam’s presence.

Now the yin to Alan’s yang, returned to physical form, Sam Zhao controls the opposite forces from his husband-to-be: the darkness of shadow that defies the brightness of Green Lantern’s light. But will this new revelation bring them back together, or simply drive them apart?

Jay Garrick is as everyman as you can get, despite gaining his powers from a dying Roman God Mercury. Now on a world with literally dozens of speedsters, how will he stand apart and make his own way?

Kendra Munoz-Sanders isn’t the only hardcore woman on the roster, but she definitely gets the prize for most adventurous. A natural explorer with a background in archeology, Hawkgirl would be the heroine most likely to seek out their counterparts in the Justice League for info on what makes this world unlike any other.

A queen of a land now gone, Marella is going to be quite lost upon arrival on the prime Earth, both spiritually and physically. And she’s going to find out really quickly that the land of Atlantis here will broach no other queen but Mera.

As the member with the closest connection to the original Seven Wonders of Earth 2, Lois Lane will take it upon herself to ensure her husband’s legacy is maintained through these seven new Wonders. That is, at least until she can locate her missing “daughters,” Kara Zor-El and Helena Wayne — Power Girl and the Huntress.

On Earth 2, Yolanda Montez was the mystical Red Lantern, avatar to the animal kingdom. On prime Earth, she doesn’t quite know what she is yet. Except her impulses are getting more and more feral with every passing day.

And that’s a wrap! What’s YOUR dream JLA roster? Sound off to @Comicosity on Twitter.com and let us know!