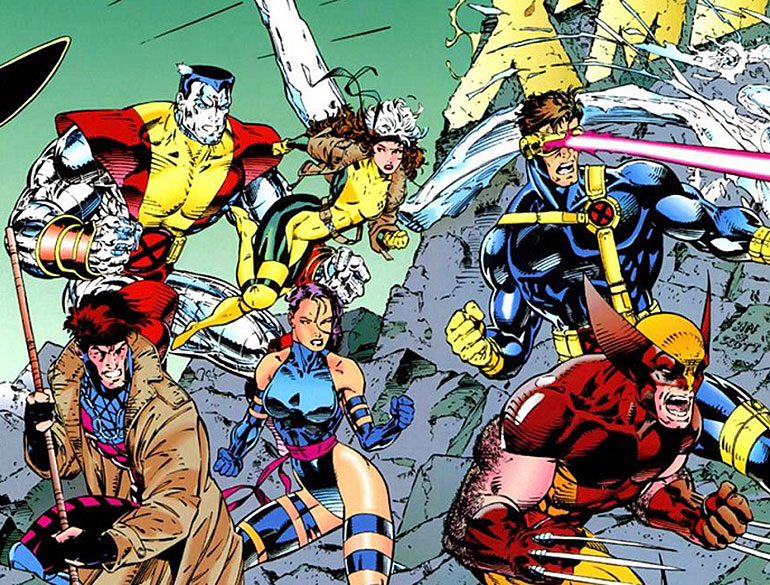 With hundreds (maybe thousands!) of mutants on hand to choose from, here’s our second of three days of creative combos to tickle your fangirl and boy imaginations! 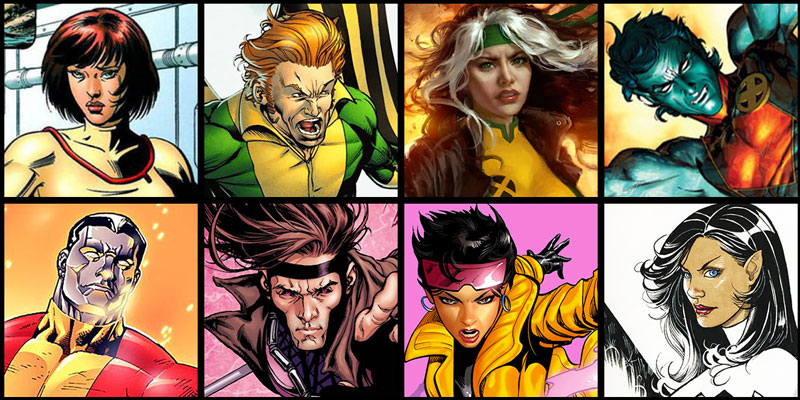 The All New X-Men capitalized on a new concept – an international team of mutants made up of heroes from exotic and far-off lands such as Ireland, Kenya, the USSR, Canada. Along with a wide mix of backstories came an ever wider mix of sometimes-challenging, often-hilarious accents. Here then is my pick for my dream X-Men line-up made up purely of the X-Universe characters with the most unusually written dialogue.

The leader of mah teem.. ahem.. sorry, my team… has a long background on X teams as a supporting character in X-Men and later
Excalibur. Her lifetime dedication to mutant health puts her in the driver’s seat.

One of my all-time favourite characters, and one of the ones most in need of reading his dialogue out loud to figure out what the writer was going for! He brings experience to this team o’ heroes.

Forever locked in with the accent of Anna Paquin in the films, Rogue has always sported an unusual accent and a tormented backstory. She adds drama to any X-men series with her will they/won’t they love stories.

Bozhe mio! Bring in that mysterious foreign flavour with communist poster boy Piotr. Of course, comic time means that Piotr was now born after the fall of the USSR, but time isn’t an object in this dream team.

Ah mon chere, the romance with Rogue rekindled, or whole pages of double entendres in French with a new teammate? Gambit is a wild card.

Is “Valley Girl” an accent? It is how Jubilee talked. Relive the 80s with this reject from Heathers!

Every good team has a Canadian, and the mixed-bag of French-Canadian accents of the lovely and troubled Aurora fill out this team very well. Long in the shadow of her brother and fellow accent-of-the-week Northstar, Aurora fills out zis team to a tee. 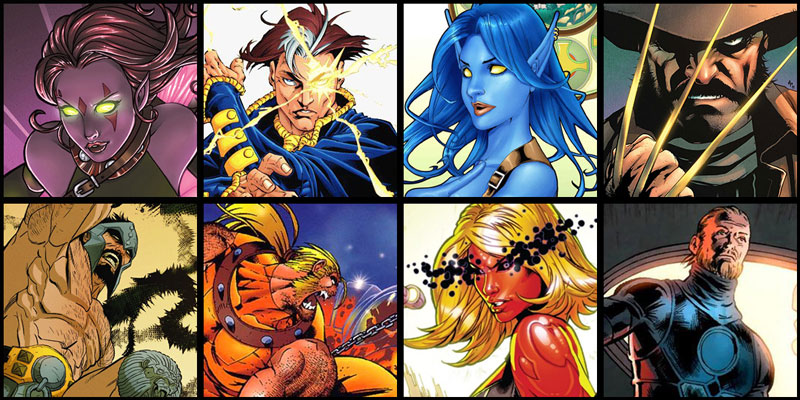 All New Exiles: The X-Men are no strangers to alternate realities, alternate timelines, and all the variations of the characters that come with it. In fact, one of the best X-titles of the 00s was Exiles, a team of displaced mutants that fixed problems throughout the multiverse.

This would be my next generation Exiles team made up of characters that don’t belong in the present day 616. The multiverse/omniverse is infected by an unknown force and only this team can travel from universe to universe and save the day.

I’ll start off with a disclaimer saying that Blink is one of my all time favorite characters. The original version of the character was introduced during the Phalanx Covenant crossover in the mid 90s, but was quickly killed off (and brought back years later). It was her Age Of Apocalypse counterpart that became a breakout star. She came into her own as a leader as a member of the original Astonishing X-Men during the AOA, and became so popular that a few years later Clarice became the leader, and star of the original Exiles series.

When the newly formed post Secret Wars multiverse gets sick, the new Timebroker, Susan Storm, chooses Blink to help fix it based on her time with the Exiles. It’s a good choice too, because AOA Blink is arguably the greatest alternate reality X-Man. Speaking of X-Man…

Nate Grey is the AOA equivalent of Cable. The biggest difference between the two is that without the techno-organic virus that plagued Cable, Nate’s powers are off the chart. When handled well, Nate’s story was a great journey into figuring out out how to belong in a place where you don’t belong. Sadly, his ongoing was absolute garbage at times, and it always left me wondering “What If.”

The mutant shaman would make for a powerful teammate for the this new Exiles team, especially since he’s been known to be able to travel to alternate realities.

The last time we saw TJ Wagner she had returned to lead the Exiles while Blink took a leave of absence to deal with other business. The daughter of Nightcrawler and Scarlet Witch is experienced in reality hopping, has spent time in the main Marvel Universe as a member of Excalibur, and she has awesome powers.

She can shoot hex bolts, use telepathy, and most impressively she can possess other bodies. Much like Blink, I miss her, and I want her on this team.

The Wolverine of Greg Pak’s X-Treme X-Men was one of that short lived title’s brightest spots. On his world he was one of the two greatest heroes before joining up with Dazzler and the X-Men team designed to hunt evil Xaviers across the multiverse. His skeleton is laced with Adamantite, the metal of the gods, thanks to partner, true love, and only non mutant member of this team…

He may not be a mutant, but you don’t get James Howlett without his love Hercules. Zeus had forbid gods (other than himself) from being with mortals, so he was forced to keep his relationship with James a secret. When the couple revealed their relationship to their world, they were banished to underworld where they fought dammed souls together for years before the events that led them to the X-Men. James and Herc would provide the love, romance, and heart of the team.

Victor Creed was a hero during the Age of Apocalypse, and was very close with Blink. He was almost a father figure to Clarice, and despite having already reunited in the pages of Exiles, that relationship would be cool to see explored more. Another interesting aspect would be how Victor interacts with James. No matter what universes there always seems to be history between Sabretooth and Wolverine. To see how their preconceived notions of each other based on their own versions would be a great wrinkle to the team.

Seen in Peter David’s X-Factor when Madrox and Layla Miller get stranded in the future, Ruby is the daughter of Scott Summers and Emma Frost. There’s no real big character reason for her inclusion on this team, but she’s just really cool looking. She also has a powerset that takes from both parents.

Who else is better equipped to deal with problems in the multiverse than arguably the most powerful mutant in the world, and the guy that created the current version of the multiverse? Franklin must figure out what’s infecting his newest creations, and to do so he must be on the ground with the team.

He was placed in the protection of Blink by the new Timebroker, Susan Storm. The fate of the team, and the future of the multiverse rests in the hands of a kid. 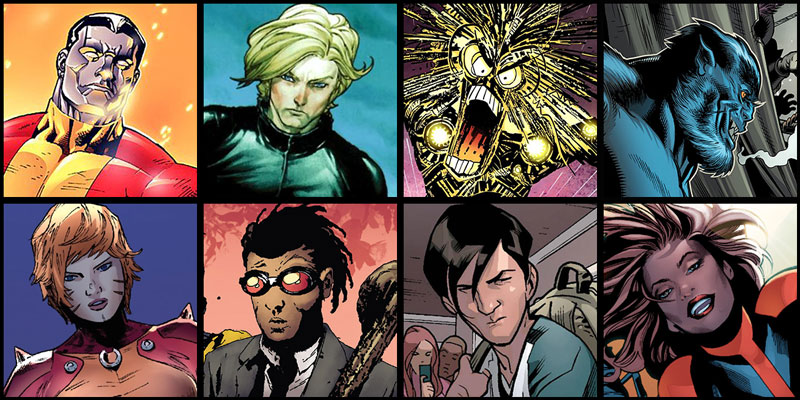 My team of Mutants is X-Factor based. A team of mutants that stay low to the ground to help regular, everyday mutants and humans with their problems. A mix of old and new school mutants, each bring something new and exciting to the office no matter the situation.

Here we have it: The All-New, All-Different X-Factor!

Peter is the leader of this merry band employed mutants. He’s been on both sides of the tracks when it comes to the good and bad scale. The metal courageous leader and more often than not big brother of the X-Men…he’s someone you can rely on when things get tough and has the strength to back it up.

The ultimate linguist, he’s great for translating and establishing a connection to any person that needs to ask the team for help. Being one of the few relatively normal ones humbles the more insane aspects of the group as well.

Cypher needs his right hand technological advanced alien emoting best friend. Every team needs a wild card that can be useful and unpredictable in nature and with his technological enhancements, Warlock is a wonderfully wacky supporter.

Hank McCoy is a genius. 90% mad genius and what’s a team without an inventor that can pave the way for how they tackle missions and different enemies.

One of the more slept on telepaths in her family and in the X-Men, Rachel acts as Security for the ANAD X-Factor and keeps everyone mentally intact.

A one man Medic, Triage is the team’s residential healer. As one of the newer mutants he’s trying to do his part for the team and stay at his best.

Ben works as a stealth operative given his power to transform into people as he sees fit. If someone needs to get behind enemy lines…Rachel and Ben are the people for the job.

M or Monet is one of the more equally powerful mutants (also read: Wildcard) and doubles as Rachel’s backup for Security for the team. It also helps to have another girl to talk too on the team.