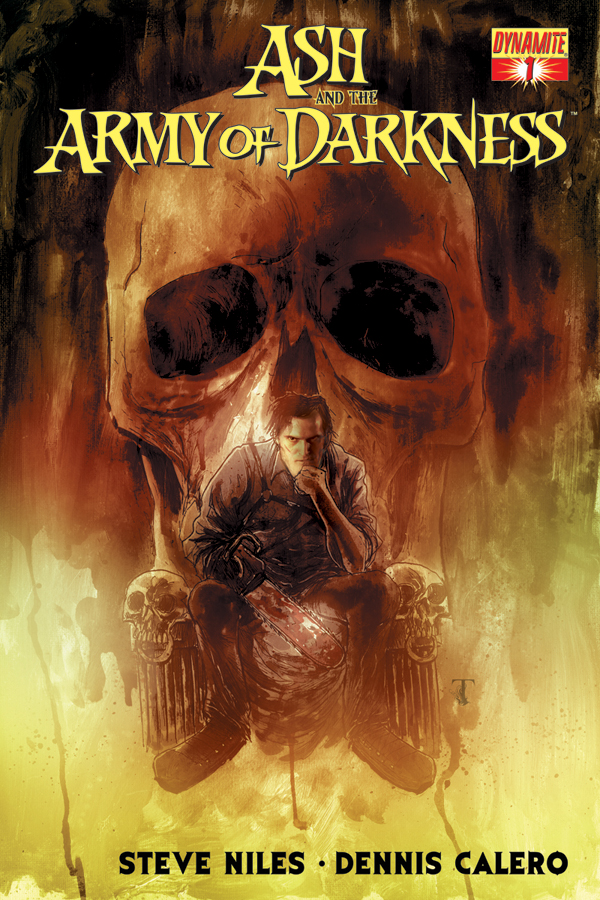 Dynamite Entertainment has announced a new series, Ash and the Army of Darkness, written by Steve Niles. 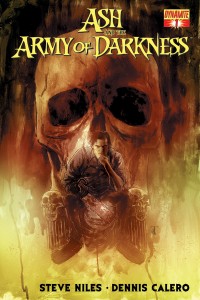 The qualifier for this special incentive is as follows:  Any retailer whose September Previews catalog initial order of Ash and the Army of Darkness #1 (any combination of the Ben Templesmith regular edition and the Dennis Calero subscription-only edition) matches or exceeds 120% of their final Red Sonja #1 orders (corresponding to Diamond item codes MAY130985-89, and MAY130993) will be eligible to return any unsold units during a window after the on-sale date.

The new Ash and the Army of Darkness follows hot on the heels of Dynamite’s recent Red Sonja relaunch, a runaway success that sold out of its 35,000-unit print run this past July (a banner achievement in today’s comic market) and necessitated an immediate second printing.  Just as superstar writer Gail Simone was the perfect selection to ring in a new era for Red Sonja, Steve Niles’ proven track record for writing fan-favorite and critically acclaimed comics — and his intent to return grueling horror to the Army of Darkness franchise — has inspired Dynamite’s utmost confidence in the project, and faith that Ash and the Army of Darkness sales will be on par with their previous success story. 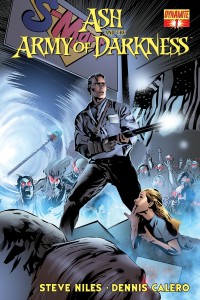 “We have an incredible amount of confidence in the series, and are excited to be part of the select publishers who are able to ship our key projects on a returnable basis,” says Nick Barrucci, CEO and publisher of Dynamite.  “Steve Niles on Ash and the Army of Darkness will be one of Dynamite’s biggest launches of the year, and if Red Sonja is any indication, we will sell out quickly and build a large audience of readers.  Anticipating that this huge launch will attract a tremendous readership, and with Steve Niles leading a great creative team, we’re proud to bear the risk and have this first issue returnable for retailers who support the launch.  This program will allow retailers to order plenty of copies for day-and-date on the shelves and achieve maximum sell-through.  And as a bonus, retailers will have sales data for Diamond’s Final Order Cut-Off procedure on issues #2 and up.”

Retailers have good reason to have faith in the Ash and the Army of Darkness project based on the previous successes of Steve Niles’ career as a comic book writer and novelist.  He is credited as being an instrumental force in bringing horror comics back to prominence, most notably due to the runaway success of 30 Days of Night, the best-selling vampire series co-created with innovative illustrator (and Ash and the Army of Darkness cover artist) Ben Templesmith.  The 30 Days of Night franchise includes numerous graphic novel volumes that have sold tens of thousands of copies, plus has served as inspiration for a feature film adaptation.  Niles’ impressive list of credits include such licensed and creator-owned tales of terror as I Am Legend, Hellspawn, Chin Music, Simon Dark, The X-Files, Remains, Criminal Macabre, and 28 Days Later.

Ash and the Army of Darkness #1 is solicited in the September 2013 Previews Catalog #300, corresponding to items shipping in November 2013; the anticipated on-sale date is Wednesday, November 6, 2013.  Two cover editions are available for order, the regular edition by Ben Templesmith (Diamond Item Code SEP131050) and Subscription-Only variant edition by Dennis Calero (SEP131051); each edition retails for $3.99.  Retailers serviced by Diamond Comic Distributors can place wholesale orders online, via fax, or by contacting their dedicated Customer Service Representative.  Initial orders may be placed on Ash and the Army of Darkness #1 beginning on August 28, 2013, and the deadline for September Previews Catalog initial orders is September 26, 2013.