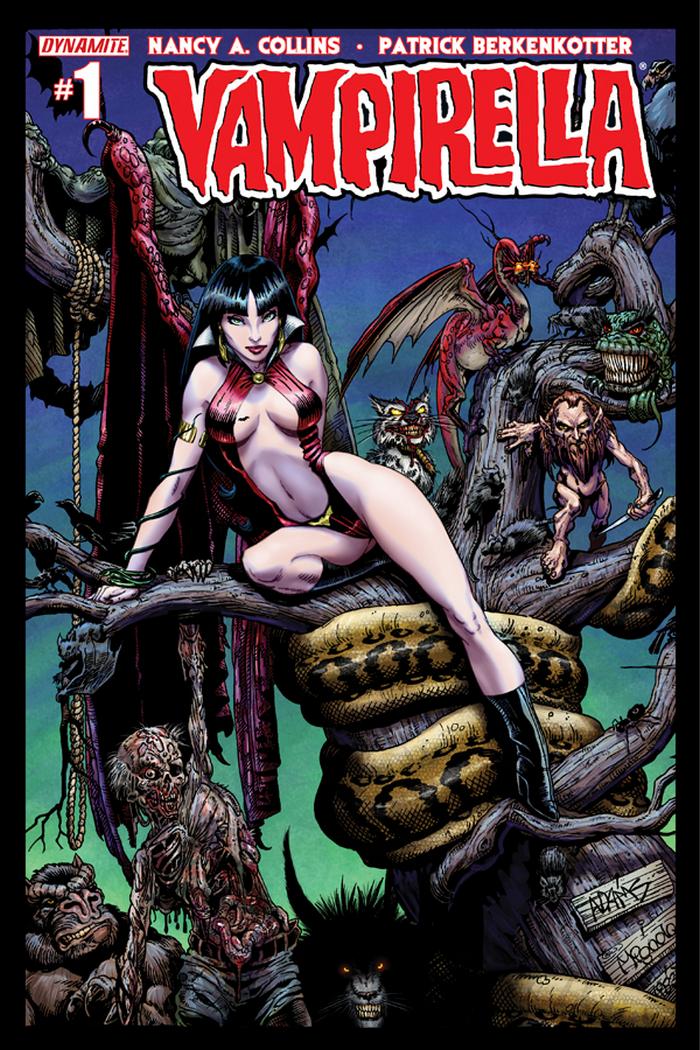 March 5, 2014, Mt. Laurel, NJ: Dynamite is proud to announce that Nancy A. Collins, the author of Sunglasses After Dark and Vamps, will revive the iconic horror series Vampirella with a #1 issue in June. Collins will be joined by talented artist Patrick Berkenkotter (Avengers/Invaders) for the new ongoing series. Superstar illustrator Terry Dodson will provide the main cover, while a veritable who’s who of industry talent will provide variant collectible covers.

“I’m very excited about taking over the reins on Vampirella,” says Nancy Collins. “I’ve really been enjoying myself so far. In celebration of her 45th anniversary, I’m returning the book’s focus to its horror roots and giving Vampirella a slightly darker edge. Dynamite has been wonderful to work with, and have given me a great deal of support. It’s been some time since I last wrote for comics, and it feels great to be back!”

As the debut “Our Lady of Shadows” story arc begins, supernatural heroine Vampirella is sent by the Vatican to investigate the kidnapping of a little girl by the Cult of Chaos… only to become the centerpiece of a ritual invoking Lady Umbra, the sister-bride of Chaos. Of the fateful repercussions, Collins says, “Vampirella’s life is turned completely upside down, and she finds herself having to team up with the strangest bedfellow imaginable in order to battle both a demonic threat and an elite Vatican hit-squad.”

Artist Patrick Berkenkotter is a staple of Dynamite Entertainment, having contributed artwork to such titles as Red Sonja, Dark Shadows/Vampirella, Project: Superpowers, and two Dynamite/Marvel crossovers, Avengers/Invaders and The Torch. “I cannot sing Vampirella artist Patrick Berkenkotter’s praises loudly of often enough,” says Collins. “His pencils are spectacular, and he’s able to make her sexy, menacing, and bad-ass all at the same time. I think the fans are going to be pleased with his work when they pick up Vampirella #1, and I hope they take me to heart as well.”
“My first exposure to Nancy’s writing was in the pages of Swamp Thing, and I’ve always remembered her run. When Gail (Simone) suggested Nancy to write one of the anniversary stories in Legends of Red Sonja, it was a great reminder of how good of a writer Nancy is. As we were prepping for Vampirella’s relaunch, and were discussing potential writers, Joe (Rybandt, Sr. Editor) commented that since we all liked Nancy’s Red Sonja story, why not approach her. The rest, as they say, is history. Patrick illustrating Nancy’s story, and Terry Dodson coming on board as the main cover artist really compliment the series as we go in to Vampirella’s 45th Anniversary. I’m confident that fans are going to love Nancy’s take on Vampirella, and be in it for the long haul. It’s that damn good.” States Dynamite CEO/Publisher Nick Barrucci.

Vampirella #1 will be solicited in Diamond Comic Distributors’ April Previews catalog, the premiere source of merchandise for the comic book specialty market, and slated for release in June 2014. Comic book fans are encouraged to reserve copies of Vampirella with their local comic book retailers. Vampirella will also be available for individual customer purchase through digital platforms courtesy of Comixology, iVerse, and Dark Horse Digital. 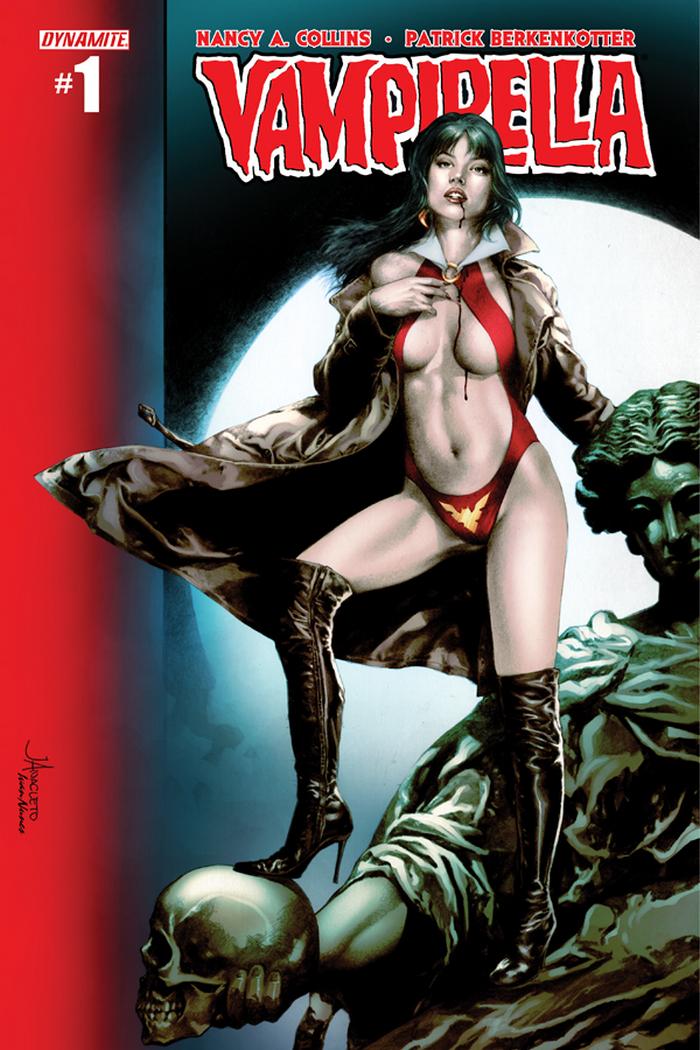 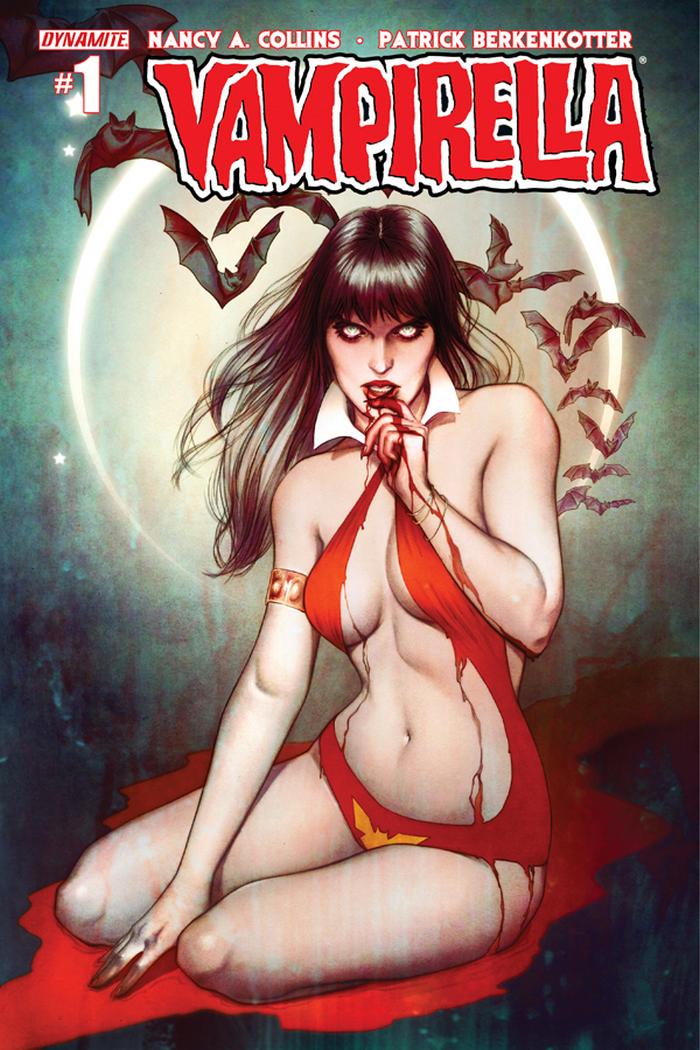 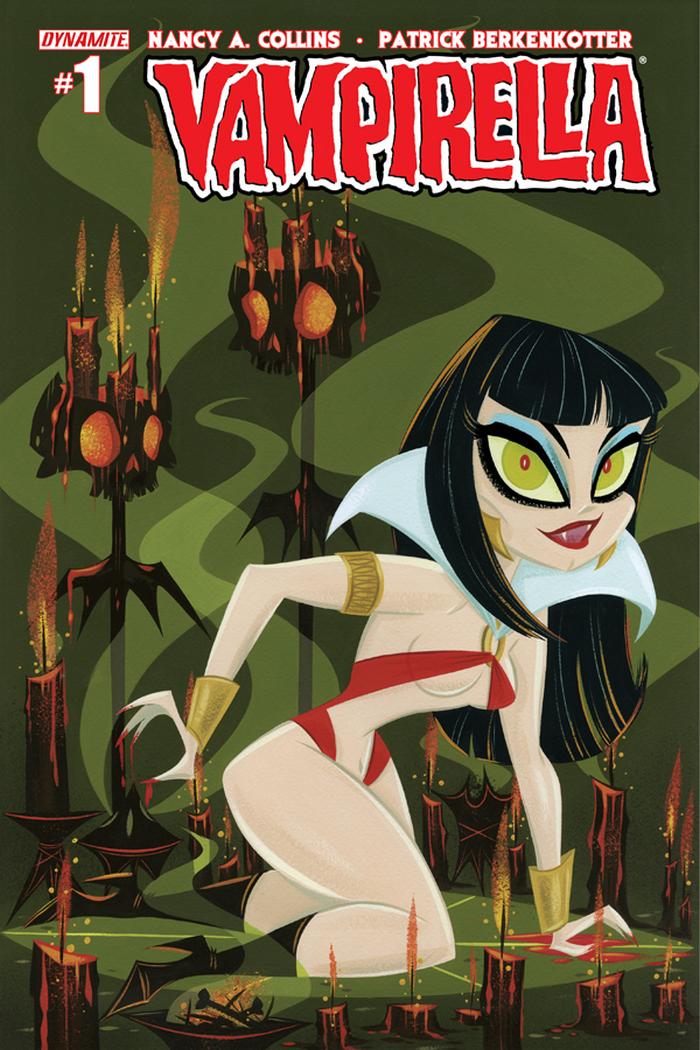 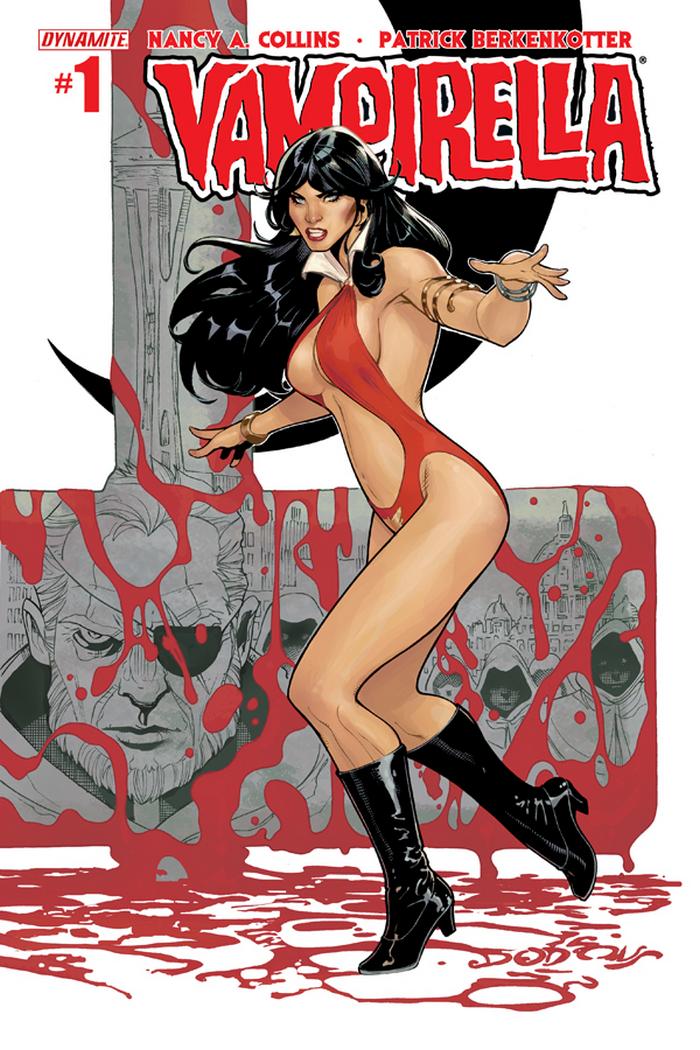 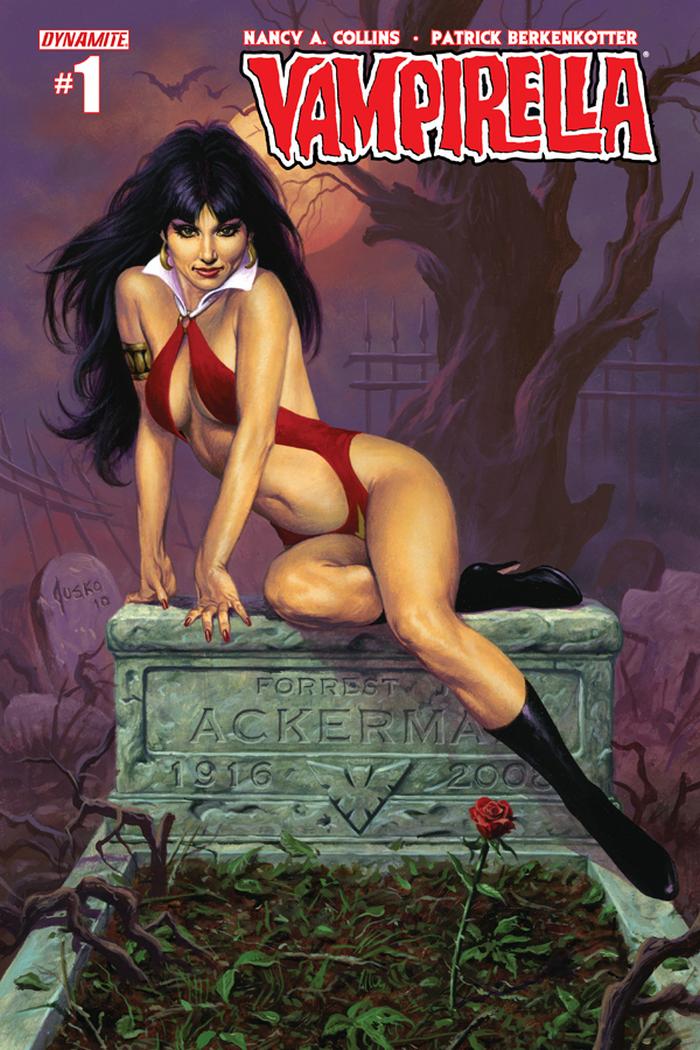 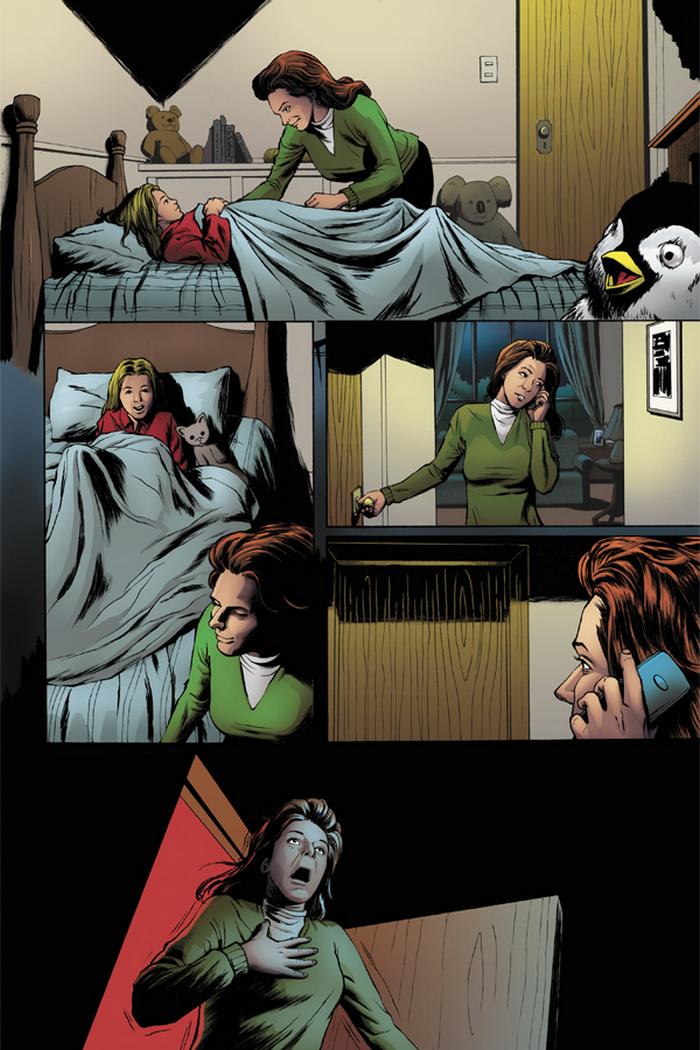 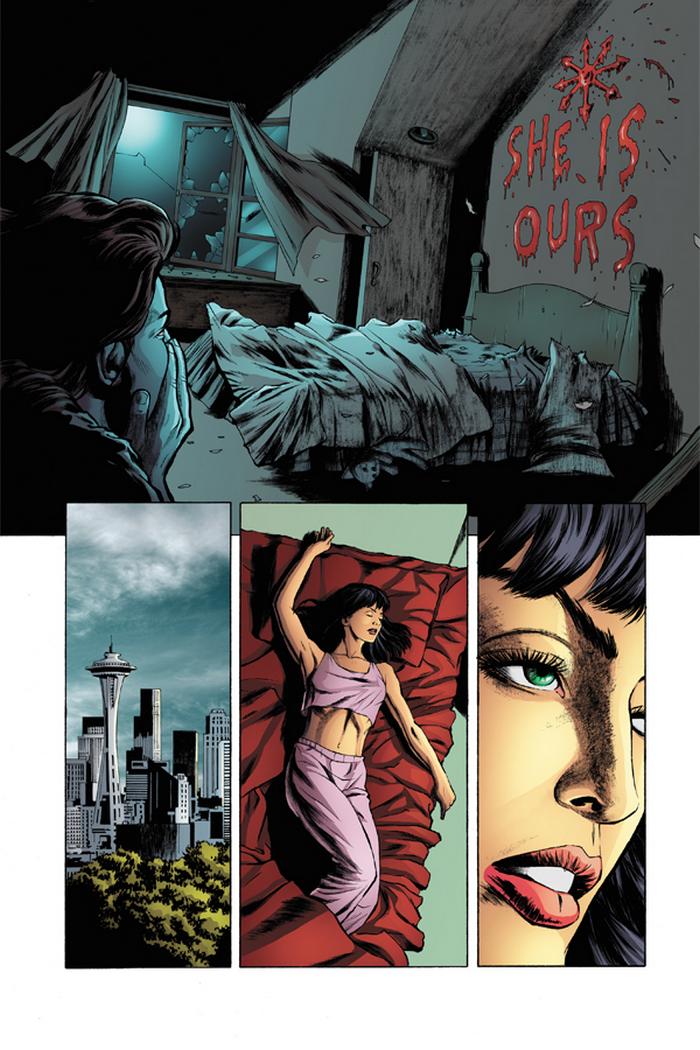 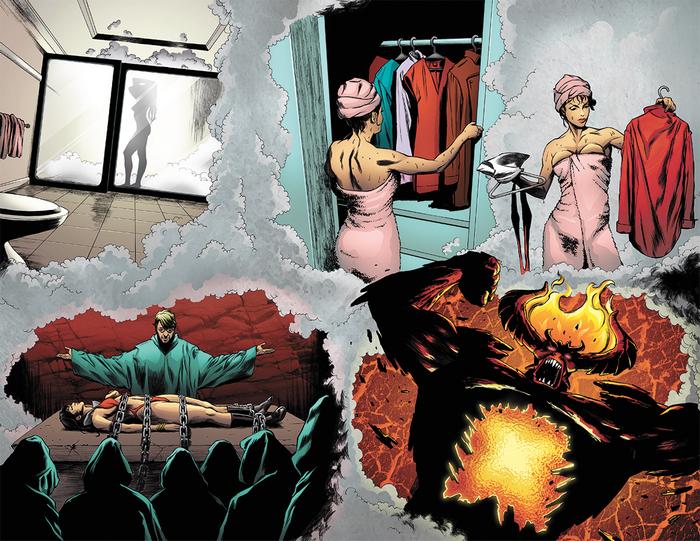