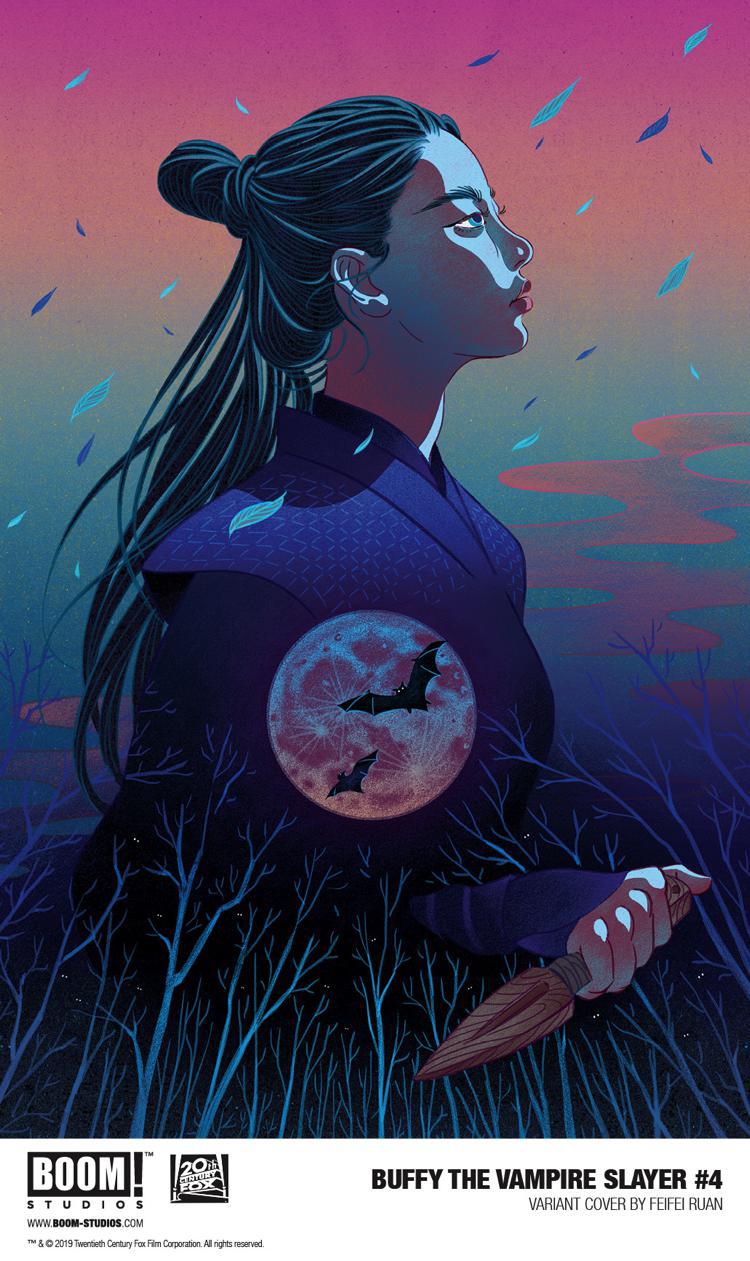 LOS ANGELES, CA (January 11, 2018) – BOOM! Studios today unveiled a main cover for BUFFY THE VAMPIRE SLAYER #4 by award-winning illustrator FeiFei Ruan (Descendants of the Crane, Jim Henson’s Storyteller: Giants) featuring the first appearance of a Slayer from ancient eighth-century China. This game-changing issue of the hotly anticipated series will debut in stores April 3, 2019, in partnership with 20th Century Fox Consumer Products. Catch the first appearance of a major character in Buffy’s life in this issue, as well as the life-altering turn of events that changes one character’s destiny forever.

The reimagining of Joss Whedon’s groundbreaking series reaches the game-changing final chapter of the first arc as Buffy and the Scooby Gang (the name was Xander’s idea, he’s workshopping it, it probably won’t stick) delve deeper into the heart of Sunnydale’s underbelly—and make a shocking discovery about the true nature of the Hellmouth. There’s no turning back for anyone on Team Slayer in this absolutely mind-blowing issue that fans can’t afford to miss.

Buffy The Vampire Slayerpremiered on the WB Network on March 10th, 1997. The Emmy and Golden Globe-nominated series, which ran for seven seasons from 1997-2003, stars Sarah Michelle Gellar as “Buffy Summers.” Chosen to battle vampires, demons and other forces of darkness, Buffy is aided by a Watcher who guides and teaches her as she surrounds herself with a circle of friends called the “Scooby Gang.”

Print copies of BUFFY THE VAMPIRE SLAYER #4 will be available for sale on April 3, 2019 exclusively at local comic book shops (use comicshoplocator.comto find the nearest one) or at the BOOM! Studios webstore. Digital copies can be purchased from content providers, including comiXology, iBooks, Google Play, and the BOOM! Studios app.

BOOM! Studios was founded by Ross Richie in 2005 with the singular focus of creating world-class comic book and graphic novel storytelling for all audiences. Through the development of four distinct imprints—BOOM! Studios, BOOM! Box, KaBOOM!, and Archaia—BOOM! has produced award-winning original work, including Lumberjanes, The Woods, Giant Days, Klaus, and Mouse Guard, while also breaking new ground with established licenses such as WWE, Mighty Morphin Power Rangers, Cartoon Network, and The Jim Henson Company properties. BOOM! will also bring their original series to life through unique first-look relationships with 20th Century Fox for film and with 20th Television for the small screen. Please visit www.boom-studios.comfor more information.