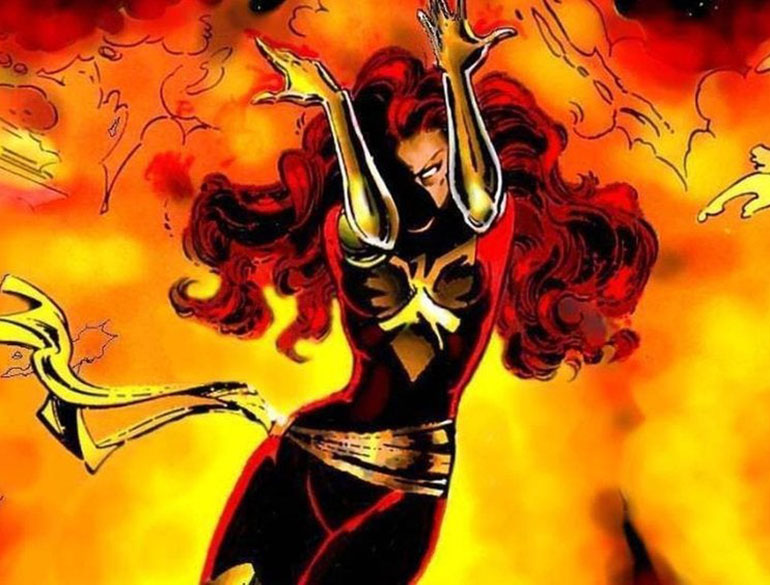 Eleven is going to kill herself at the end of Stranger Things.

Bold claim, I know. Especially since I don’t know how many seasons are left, nor have I uncovered any insider information in the coffee shop I’m sitting in.

But listen, Eleven, Mike, and the rest of the gang are going to come up against the big bad from the upside-down and realize that they need to break the link between the two worlds. She will find her telekinetic powers becoming stronger, but her psyche will be torn asunder by everyone’s expectations of her and she will be unable to maintain a grounded sense of self amid the emotional maelstrom her circumstances has triggered. Seeing all the calamity she has unwittingly sown and, frankly, being afraid of further carnage her powers will bring, Eleven will choose to spare her loved ones more anguish and end her life. 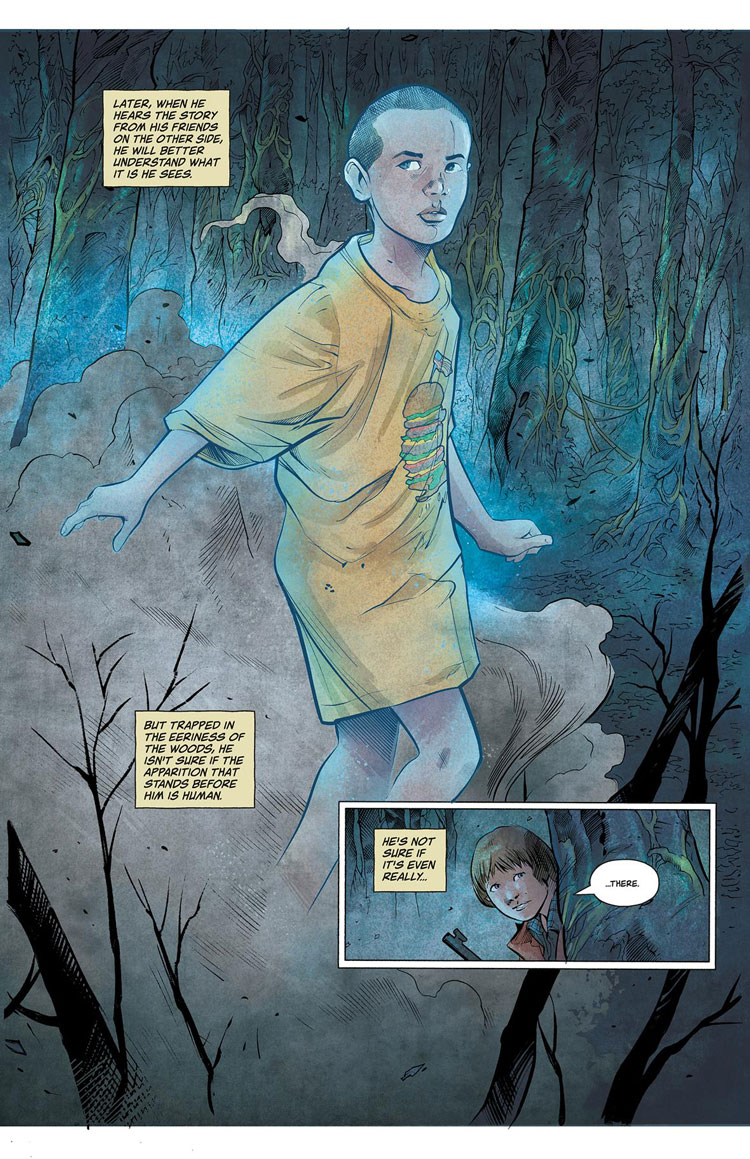 This is some dark stuff, but it wasn’t my idea. And frankly, it wasn’t The Duffer Brothers’ idea either.

Stare at the story long enough and you’ll see the parallels. That much of the chaos is caused by a break in the upside down mirrors how the M’Kraan Crystal was broken all those years ago in the four-color pages of Uncanny X-Men. Eleven struggling to find herself in the context of an overwhelmingly destructive power she was gifted runs astride Jean Grey doing the same after a fateful space-faring adventure. Mike, Eleven’s budding love interest, will stand beside her come whatever may in a Cyclops-kind-of-way. Maybe Kali will ever use her illusions to convince Eleven to embrace her baser nature as Jason Wyngard and The Hellfire Club attempted to do to Jean.

And if you don’t believe this is more than coincidence, the first episode of Stranger Things directly mentions Uncanny X-Men #134. Twice.

This story isn’t mine, the Duffer Brothers’, or even Eleven’s for that matter. Stranger Things is a purposeful retooling of Chris Claremont and John Byrne’s “The Dark Phoenix Saga.” 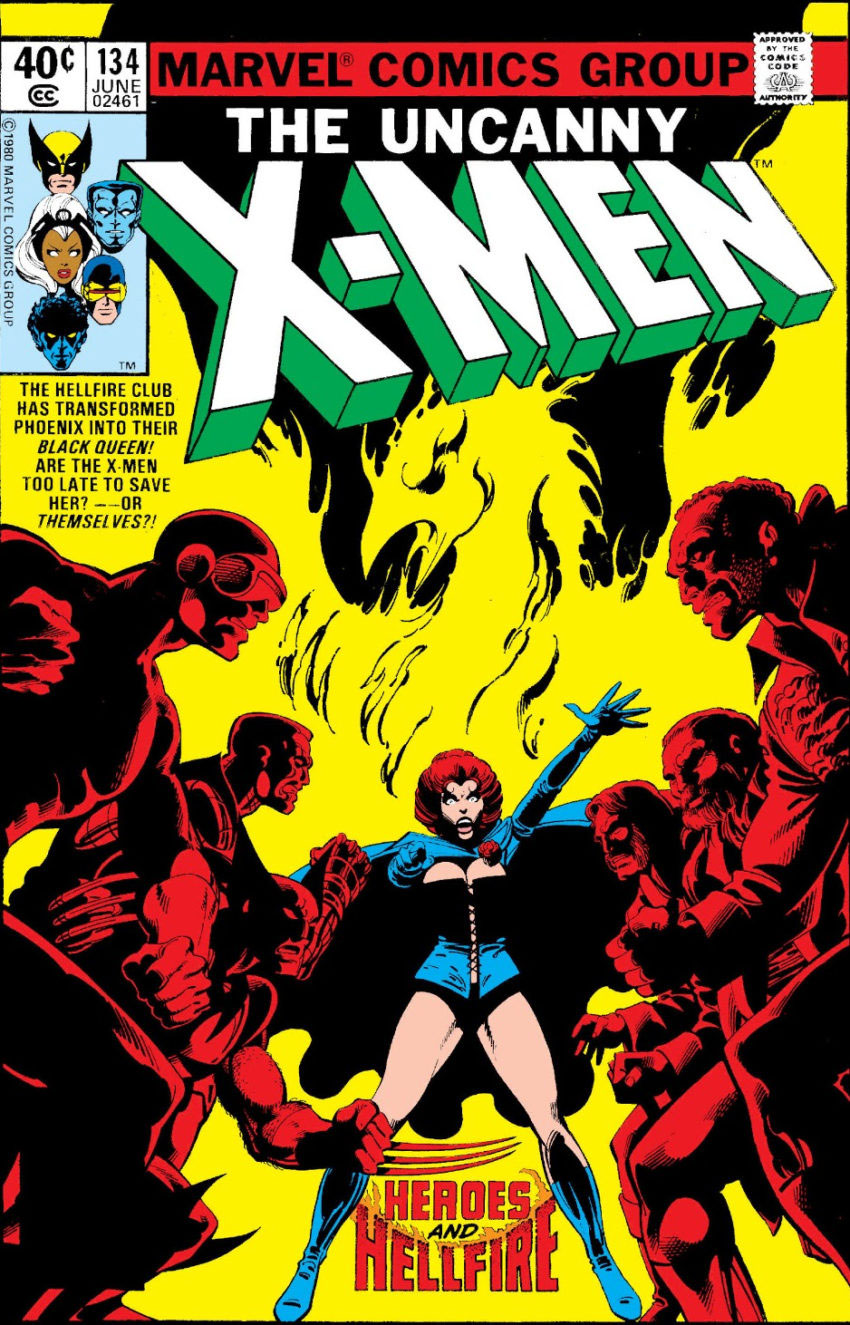 “The Dark Phoenix Saga” tells the tragic tale of Jean Grey, an unassuming girl who comes to possess unimaginable power. Previously designated as the weakest member of the X-Men, Jean is quickly overwhelmed by a new-found strength, struggles with the responsibility and burden that power predicates, and loses herself amidst external forces seeking to manipulate her — not to mention the warring angels and demons of her psyche. Jean, using her tethers to her loved ones for support, rises above this turmoil to make herself whole and, for however brief a time, becomes the most fearsome woman in the cosmos.

Jean’s story was instantly recognized as a watershed moment for the comic book medium at the time of its publication in 1980, as it has been cited and chased by many creators seeking to craft coming of age stories ever since.

The Hunger Games’ Katniss and every YA protagonist launches their respective arrows from their unlikely pulpits of influence with the same trepidation as Jean showed when she first began to use her power. Naruto and every Shonen character probes the might of the demon raging inside them with the same restraint and fear Jean had when she was forced to use The Phoenix Force. And hell, even Rory Gilmore didn’t know what to do with Dean and Jess when she realized that she was growing beyond Stars Hollow in much the same way that Jean didn’t know what to do with Scott once she acclimated to her new place of power. 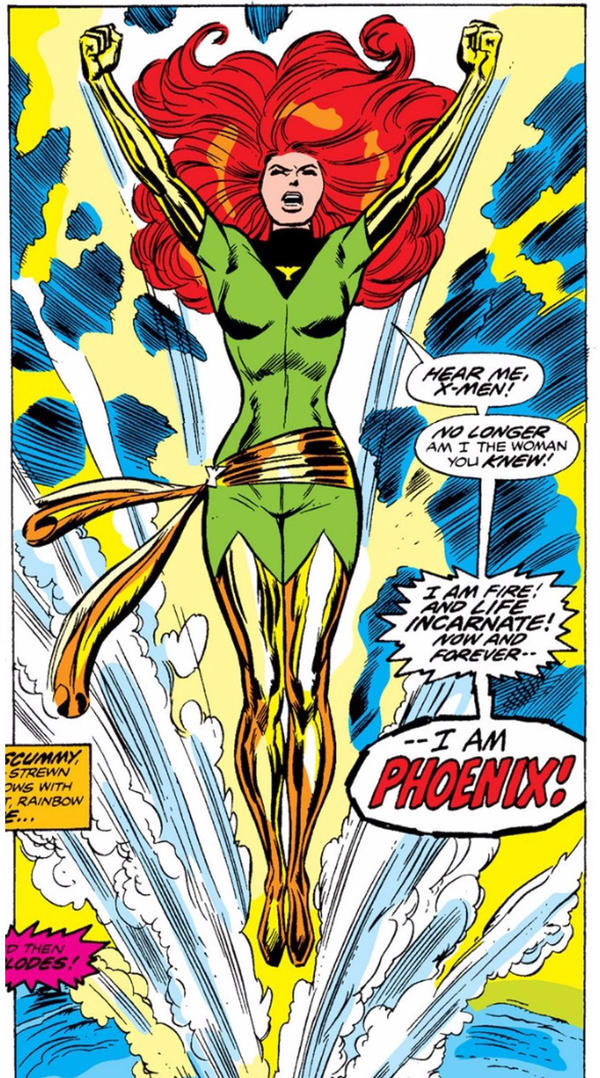 “The Dark Phoenix Saga” remains a crucial part of our zeitgeist because it is all of these stories at once. It is a story-mold for a central archetype in literary theory and exemplifies tropes and moments that have propagated throughout media. However, while the Phoenix’s flame has inspired many story-crafters that have witnessed its might, it still burns today because of the audience who champion her story.

Jean’s story has several, equally profound interpretations. For many, the emergence of the Phoenix Force represents that emotionally violent period in your life when rising responsibilities prompt you to reassess your identity, goals, and passions and force you to find new methods of acting in a way that benefits yourself and your loved ones. 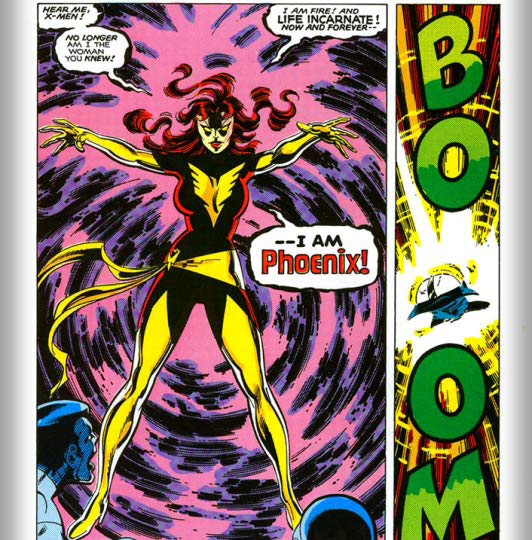 Others see the Phoenix Force as a grim parable for mental illness and how those afflicted can find the strength to grow beyond it. And those who mine the subtext will find themes of empowered feminism, self-acceptance, duality of person, guilt and innocence, sexual liberation, search for courage, perils of power, and dread of choice.

The Phoenix has given all of this to nearly four generations of readers. I would never dare to weigh or dispute any of these readings because I can’t argue with that many people. But what troubles me isn’t what Jean’s story is and isn’t. What troubles me is how Jean’s story (at least temporarily) ends. 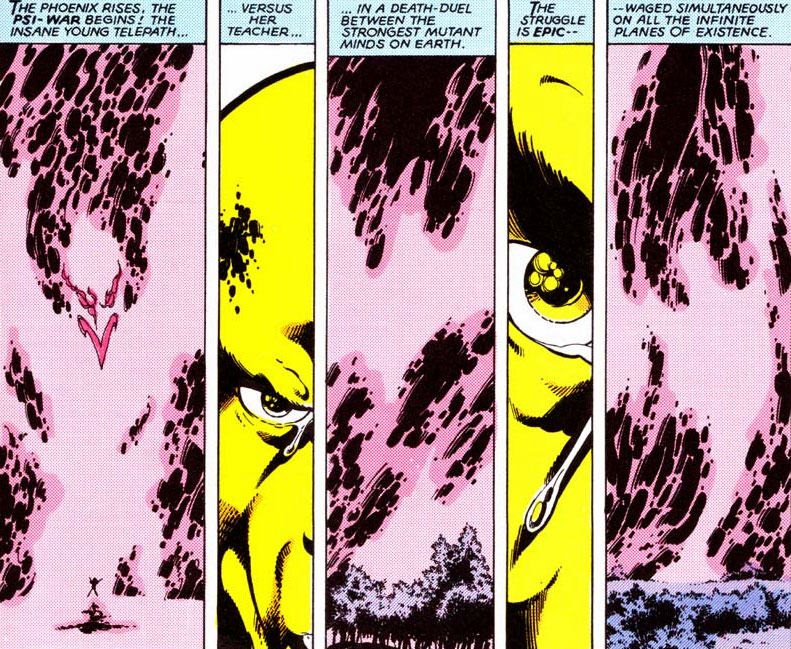 What troubles me is that a tracing of every multitude contained with Jean Grey leads to suicide.

At the end of “The Dark Phoenix Saga,” Jean spends one final night with Cyclops, dons her original X-Men costume, and ends her life to spare her loved ones and the universe any further dread that a life as the Phoenix may bring. This is depicted as an act of heroism and benevolence within the panels. Jean herself explains that she cannot live with the guilt from the carnage she reaped as the Phoenix and the constant fear of herself. She is posthumously remembered as someone who “…could have lived to become a god. But it was more important to her that she die…a human.”  This ending can be justified within the specific circumstances of the story and within the context of a superhero comic. However, Jean doesn’t just go through the tropes of a standard super-hero story. Jean decides to kill herself after going through a coming of age story.

Jean goes through every trial, tribulation, and trope en route to becoming an adult. She rises and falls, loses herself and finds herself, forms a family and finds love — and in the process, finds unimaginable strength within herself to issue a rally cry for raging youth, to become a beacon for the lost and damned, and a shore for anyone drowning within themselves.

That is Jean Grey’s legacy. But understanding that Jean went through all of this, how are we to interpret her decision to end her life? 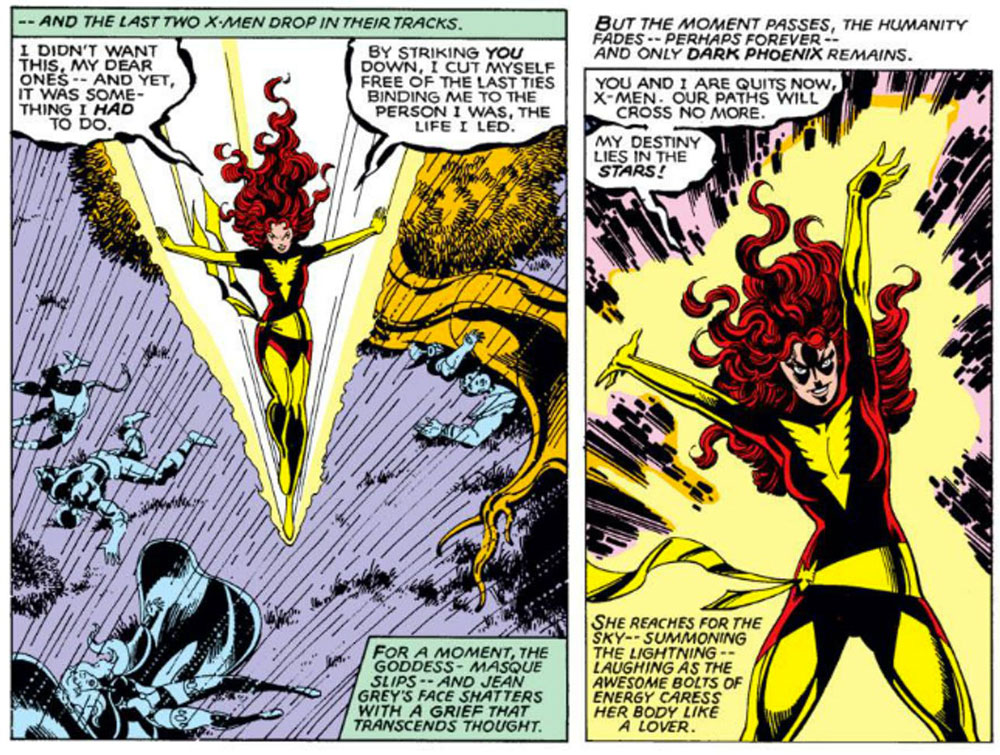 Was Jean’s suicide an act of heroism as the story would like us to believe? Does the Phoenix exist to caution us against the flames of our existentialism? Have we been unwittingly celebrating romanticized tragedy for 40 years? And will Eleven follow Jean into the dark?

Eleven will likely confront this choice the same way that Jean did. You can see the clear parallels between their stories and you can imagine a set piece with Mike and the gang, battered and beat like The X-Men on one side, Hawkins labs, and the police encroaching on her like the Shi’ar Empire on the other. Eleven may teeter on the edge of herself like Jean.

While I stick firm to my prediction, I hope I am wrong.

“The Dark Phoenix Saga” taught me the importance of seeking help. At different points in her story, Jean Grey was able to snuff out entire solar systems and repair tears in reality itself but despite her might, still needed Cyclops and the X-Men to temper the flames of the Phoenix. 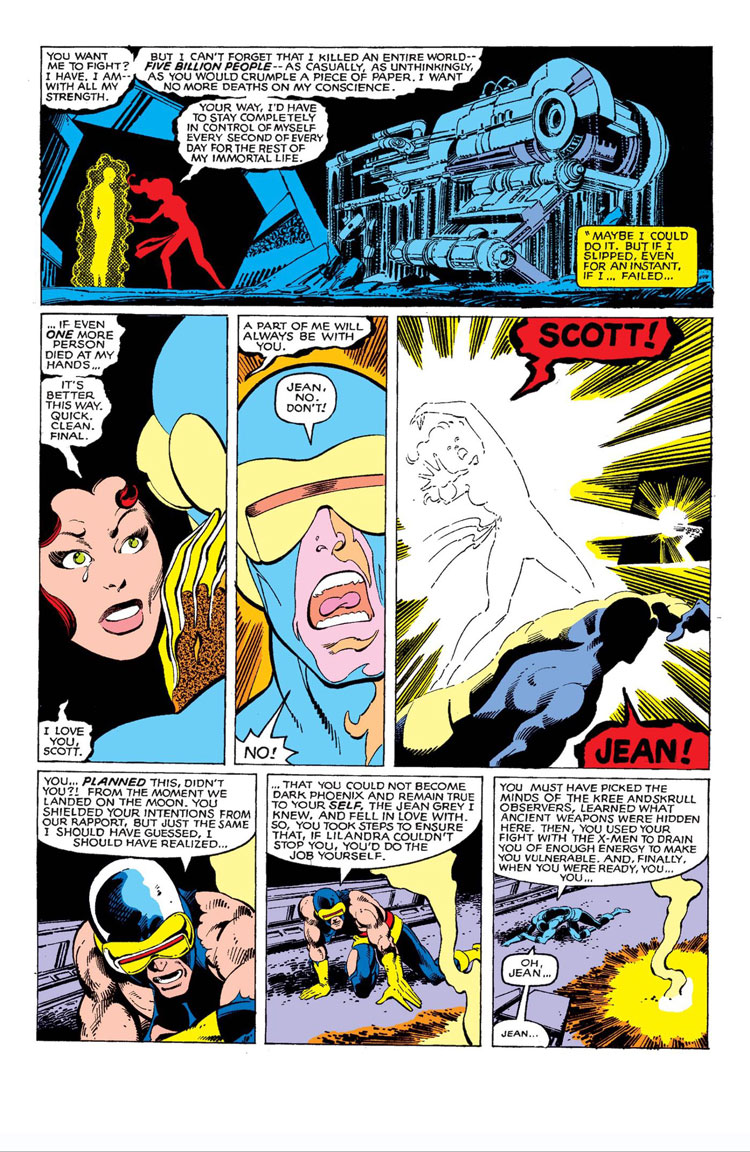 But instead of using that to her advantage, Jean chooses to isolate herself at crucial moments in her story. The Phoenix is then allowed to overwhelm Jean, cause her to commit unspeakable atrocities in its name, and buries Jean in the ashes of her flames. Cyclops and company could have prevented this had Jean reached out. Jean could have used Cyclops and company to ground herself as the fires around her swirled but, sadly, she could not see past all the smoke.

And when your flames come, always run through them towards the light.