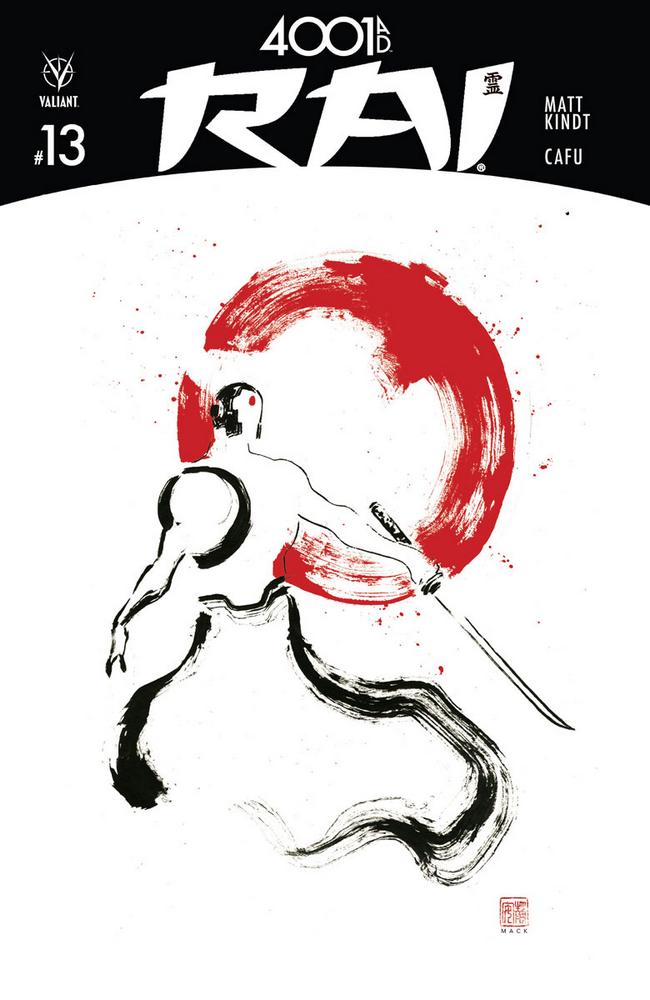 Valiant’s acclaimed series returns this May to join the summer’s blockbuster crossover event with AN ALL-NEW JUMPING-ON POINT revealing the untold origin of New Japan and its original protector – the very first Rai!

Valiant is proud to present an advance preview of RAI #13 – the FIRST ISSUE of an all-new story arc rocketing out of the pages of the year’s most anticipated comic event…4001 A.D.! On May 18th, New York Times best-selling writer Matt Kindt (4001 A.D., DIVINITY II), joins forces with rising star CAFU (UNITY) to reveal the never-before-told story of New Japan’s tyrannical rise to power…and, with it, the genesis of one of the Valiant Universe’s most iconic heroes! Launching directly out of the pages of 4001 A.D. #1 (of 4) – on sale May 4th – THE SUMMER OF 4001 A.D. continues here with an all-new, standalone chapter uncovering, at long last, the 41st century’s most closely guarded secret!

As 4001 A.D. teeters on the brink, discover the intertwined origins of New Japan’s very first Rai and his creator, Father – the despotic artificial intelligence that would one day threaten us all. And as the truth behind these long-lost beginnings resurfaces, so too will the questions that have eluded mankind for nearly two millennia. How did New Japan come to orbit Earth? Who created Father? And what happened to the nine previous Rai that once swore allegiance to his empire?

On May 18th, “THE SUMMER OF 4001 A.D.” explodes with an all-new entry point into the most-acclaimed universe in comics as all-star creators Matt Kindt and CAFU chart the rise of New Japan’s sworn protector and the empire that spawned him, only in RAI #13 – featuring covers by David Mack (Daredevil), CAFU (IMPERIUM), Clayton Henry (HARBINGER WARS), and Ryan Lee (Uncanny Inhumans)!

Plus: Don’t miss the first shot fired in Rai’s insurrection against the forces of New Japan when THE SUMMER OF 4001 A.D. officially begins in 4001 A.D. #1 (of 4)! On May 4th, the future of Earth will be decided in the stars as Matt Kindt (RAI, Mind MGMT) and acclaimed artist Clayton Crain (RAI) unite the full force of the 41st century behind the FIRST ISSUE of the summer’s long-awaited crossover event!

Then, “THE SUMMER OF 4001 A.D.” escalates even further as an all-star cast of superstar talents come aboard to reveal what the 41st century holds for Valiant’s most iconic heroes in a new series of four indispensable one-shots! Featuring X-O Manowar, Bloodshot, Shadowman, and the debut of an all-new, top-secret character with a crucial tie to the present and future of the Valiant Universe, “THE SUMMER OF 4001 A.D.” erupts into full force here with four new chapters from Valiant’s most acclaimed creators:

Each chapter of “THE SUMMER OF 4001 A.D.” is designed for maximum accessibility and can be read in concert with the core 4001 A.D. series or stand on its own for a new vision of the future of the Valiant Universe. 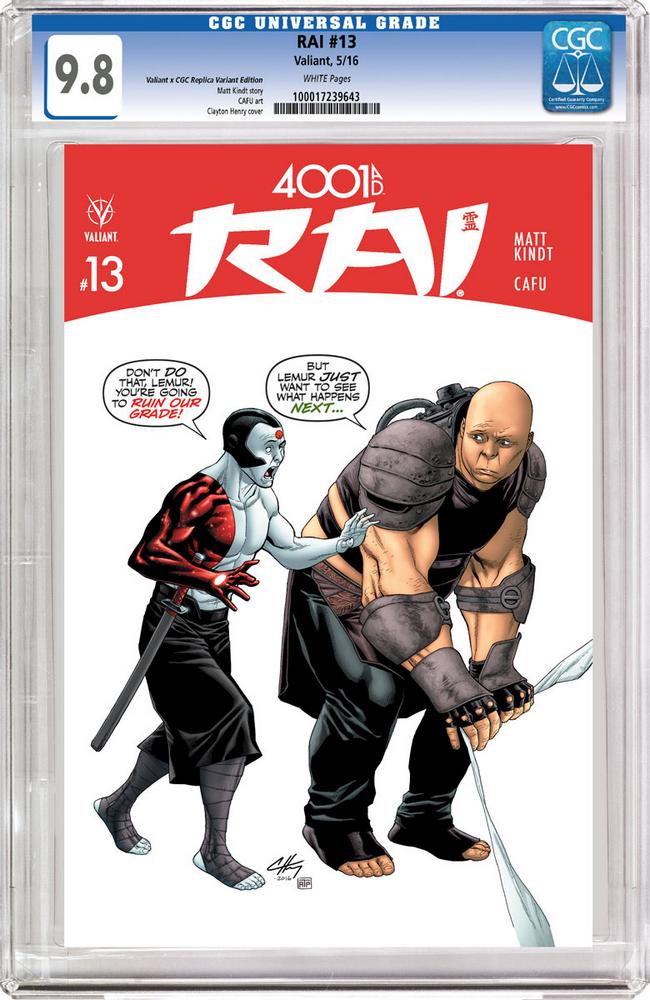 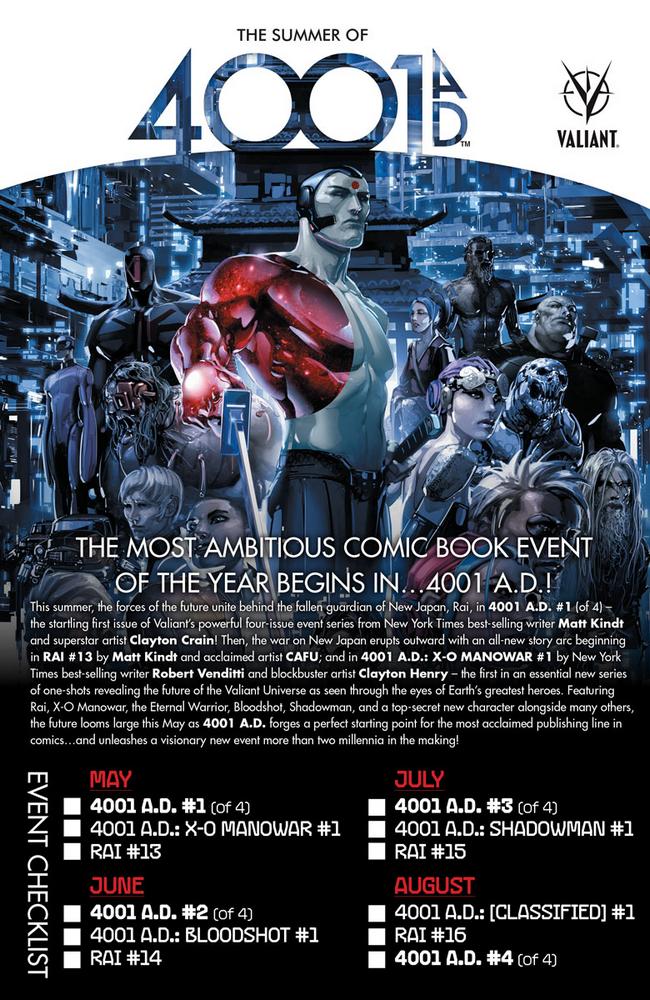 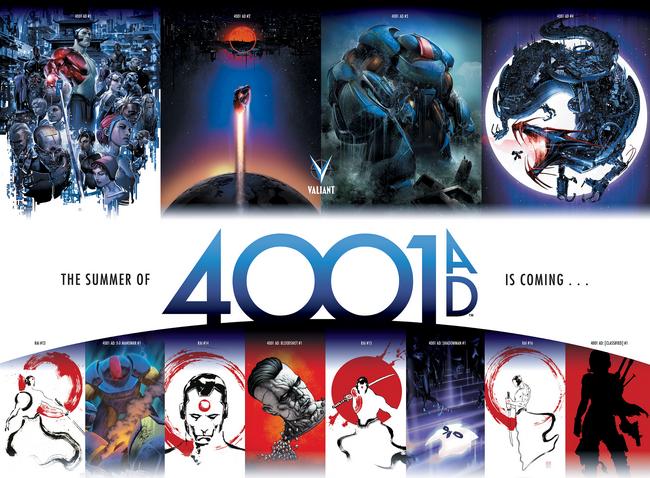 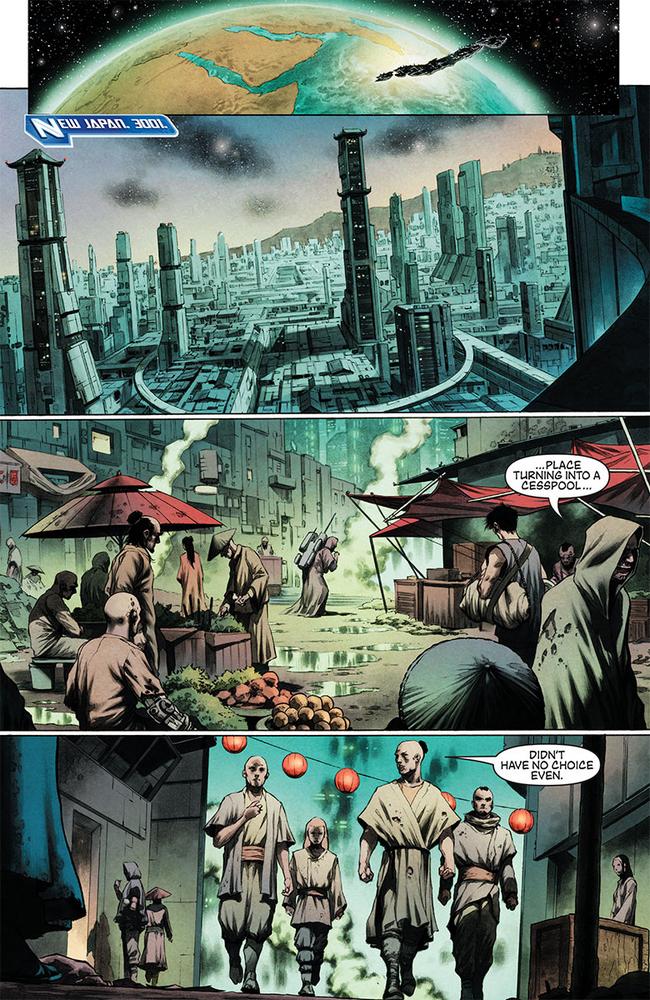 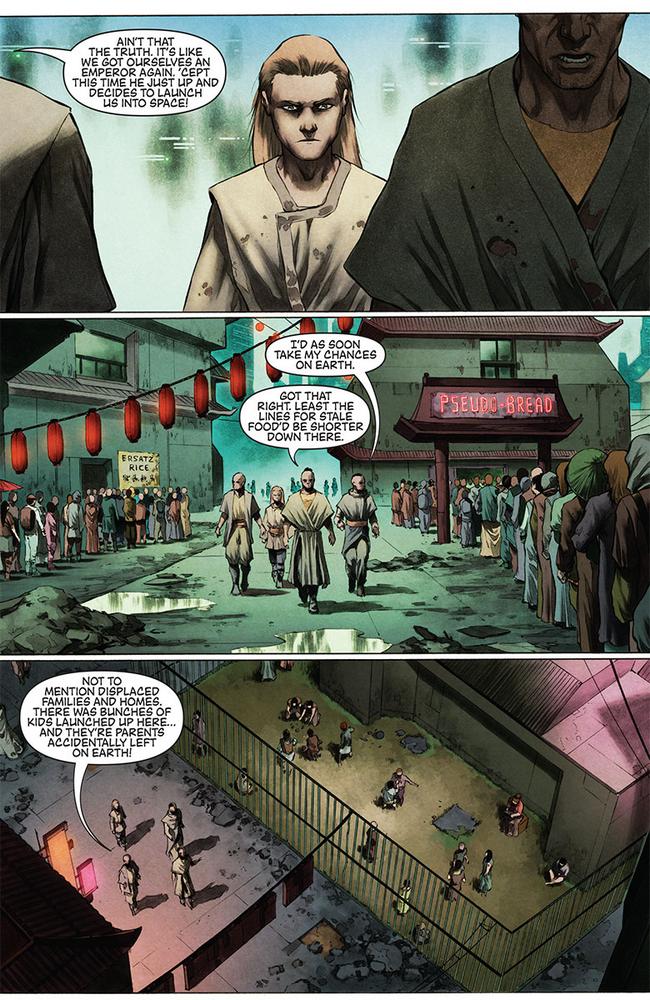 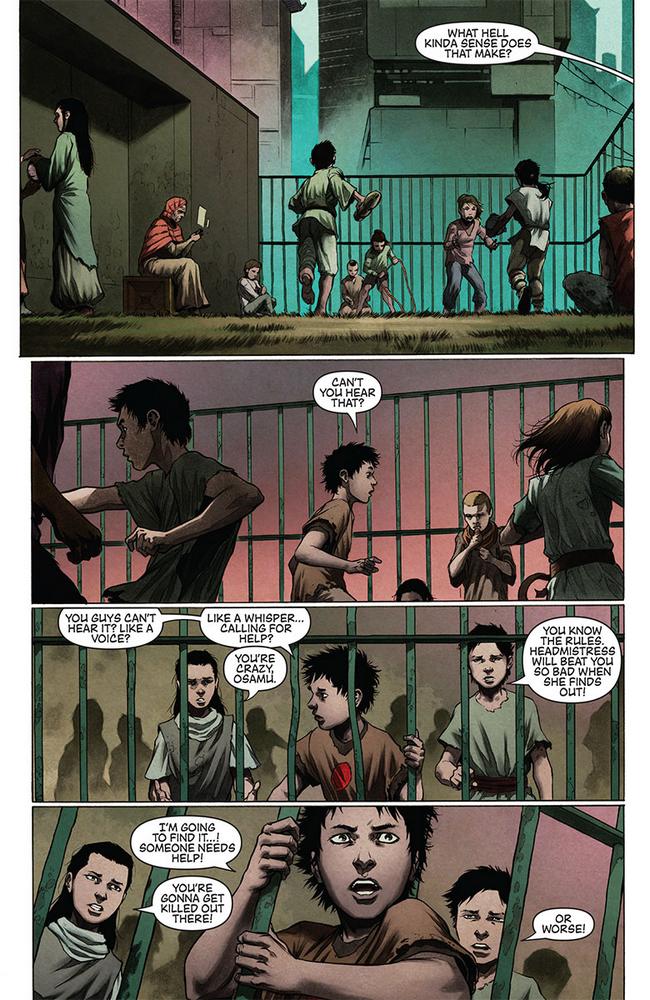 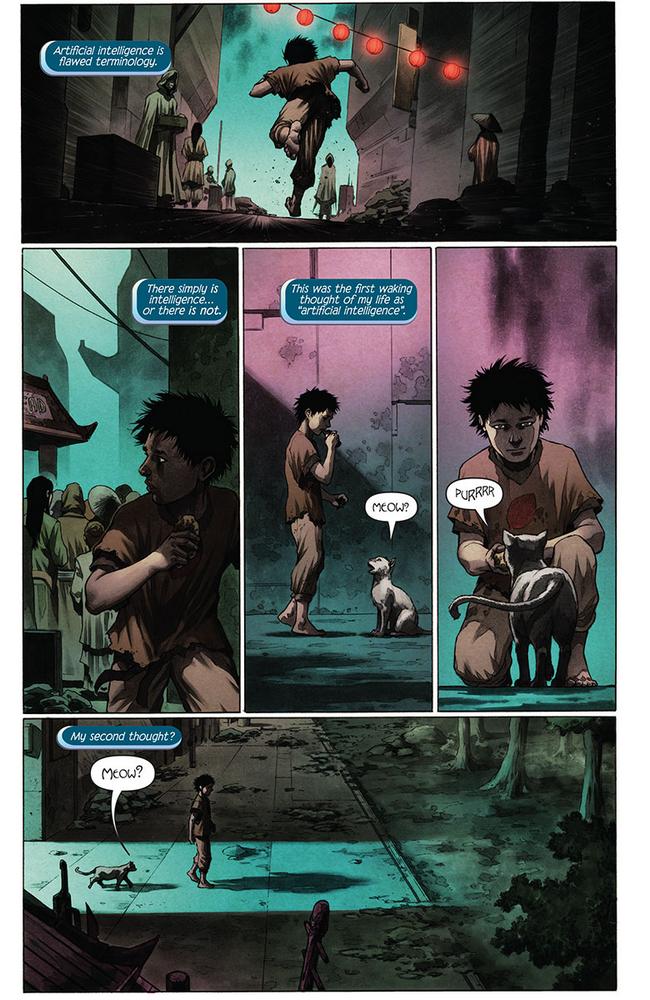 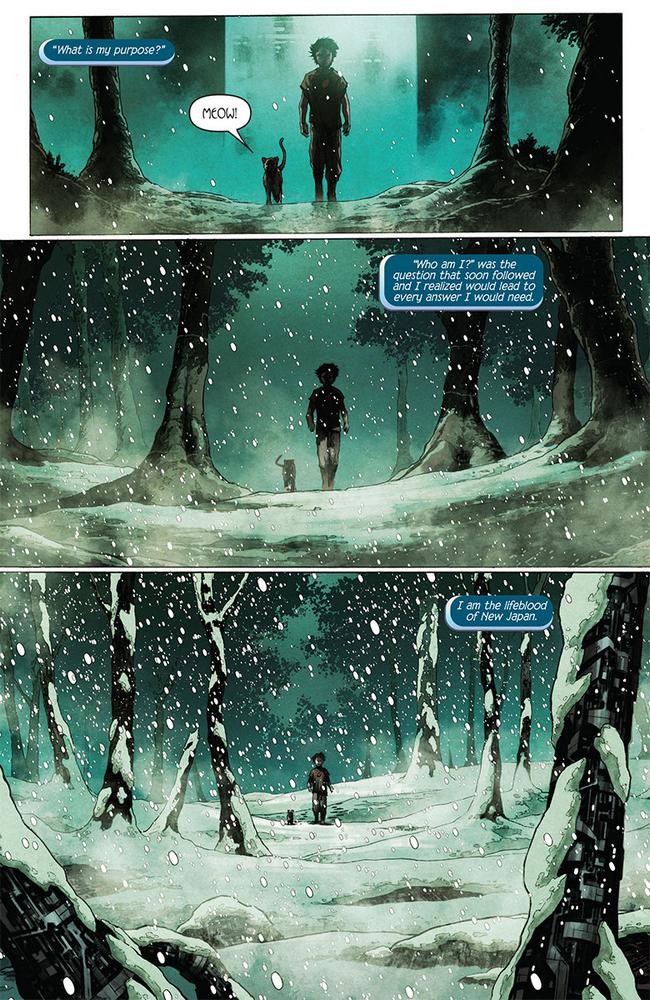