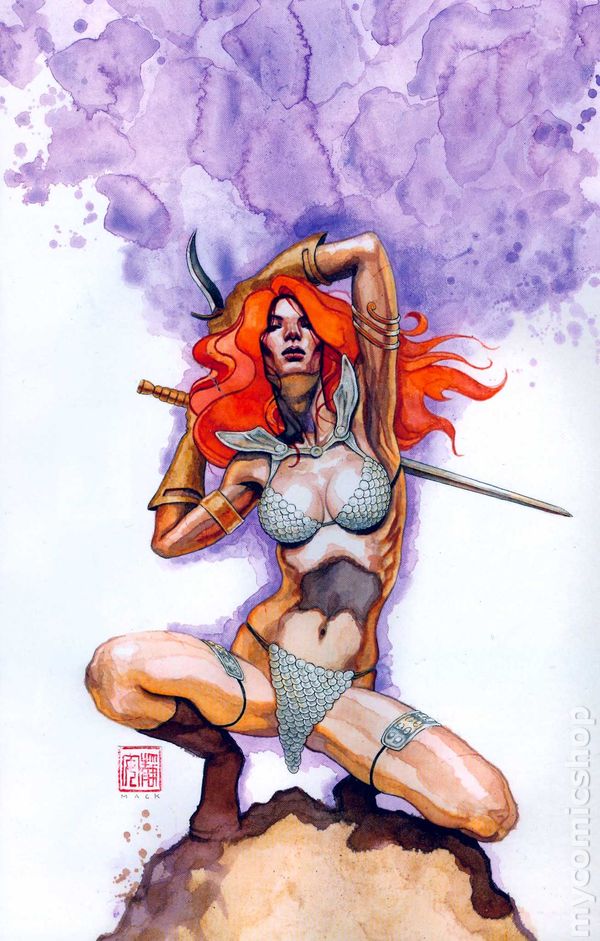 Dynamite Entertainment has announced, via its website and Emerald City Comic Con appearances, that Gail Simone will be writing the ongoing adventures of its premier character RED SONJA in a new title debuting with #1 in July 2013. Full press release follows: 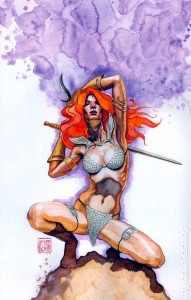 March 1st, 2013, Mt. Laurel, NJ – Dynamite is delighted to announce that the one and only Gail Simone is taking on RED SONJA with a brand-new #1 issue launching this July – in time for San Diego Comic Con!  Gail Simone – one of the premiere writers in the comics industry, is best known for DC’s Birds of Prey, Secret Six, and especially Batgirl! Walter Geovani will join her, as the interior artist. Covers will be drawn by some of the top female artists in comics today!  We are extremely fortunate to have Nicola Scott, Colleen Doran, Jenny Frison, Stephanie Buscema, Fiona Staples on covers, with more high profile female cover artists to be announced!  Fans will definitely want to pick up Gail Simone’s RED SONJA #1 this July!

To help kick off the celebration of Gail’s take on The She-Devil with a Sword, Dynamite is proud to give away, to all Emerald City fans, limited edition prints featuring art from the upcoming Nicola Scott covers!  These limited edition, high-end prints are sure to be highly sought after collectibles, and are being given away to fans for free, as premium prints, to be signed by Gail herself at Emerald City Comic Con, to rev up for the launch in July!

“It’s like this…even most of the best female heroines when I was a kid were pretty polite. What I love about Sonja is that she isn’t polite, she says what she means and if you give her any lip about it, hello, sword in the gut. She’s smart, she has a heart, she has some compassion. But when it’s go time, she’s a hellraiser, a mad general, she’s a sword edge virtuosa, she’s death on wheels. She is the woman you never want to mess with. I can relate, Sonja. No offense to all her guy writers, but THIS Red Sonja is about sex and swords! It’s everything you love about Red Sonja, except with more monsters getting stabbed in the eye.”

“Words can’t even express how excited I am to have Gail Simone, one of the premiere writers in all of comics, write RED SONJA, a character she was born to work on.  Fans will see in the first issue that she really cuts in to the heart of the character :-),” says Dynamite Entertainment CEO/Publisher Nick Barrucci.  “I have wanted to work with Gail for years, and it’s incredibly exciting that her first choice in working with us is Sonja.  A strong-willed female with fiery red hair writing about a strong-willed female with fiery red hair – AND A SWORD!  It is a dream come true that this project has finally come to fruition!  Gail and Sonja’s will be the blades that cut the deepest to her enemies chagrin!”

Gail Simone got her start in comics writing for Bongo Comics, home of The Simpsons. Following her time there, Simone entered the mainstream comics world with a run on Marvel Comics’ Deadpool, and later, Agent X. Gail is best known for known for runs on DC’s Birds of Prey, Secret Six, Welcome to Tranquility, Wonder Woman, and Batgirl.

Red Sonja, the She-Devil with a Sword, is a fictional character, a high-fantasy sword and sorcery heroine created by Robert E. Howard, and adapted for comics by Roy Thomas and Barry Windsor-Smith. She first appeared in Conan the Barbarian #23 (Marvel Comics).  Red Sonja has become the archetypical example of the fantasy figure of a fierce and stunningly beautiful female barbarian who typically wears armor resembling a bikini or lingerie.  For nearly a decade, Sonja has had many successful series with Dynamite Entertainment, and she now appears monthly, as well as in mini-series and one-shots, all published by Dynamite Entertainment.

DYNAMITE ENTERTAINMENT was founded in 2004 and is home to several best-selling comic book titles and properties, including The Boys, The Shadow, Vampirella, Warlord of Mars, Bionic Man, A Game of Thrones, and more!

Dynamite owns and controls an extensive library with over 3,000 characters (which includes the Harris Comics and Chaos Comics properties), such as Vampirella, Pantha, Evil Ernie, Smiley the Psychotic Button, Chastity, Purgatori, and Peter Cannon: Thunderbolt.

Dynamite is consistently ranked in the upper tiers of comic book publishers and several of their titles – including Alex Ross and Jim Krueger’s Project Superpowers – have debuted in the Top Ten lists produced by Diamond Comics Distributors. In 2005, Diamond awarded the company a GEM award for Best New Publisher and another GEM in 2006 for Comics Publisher of the Year (under 5%) and again in 2011. The company has also been nominated for and won several industry awards, including the prestigious Harvey and Eisner Awards.