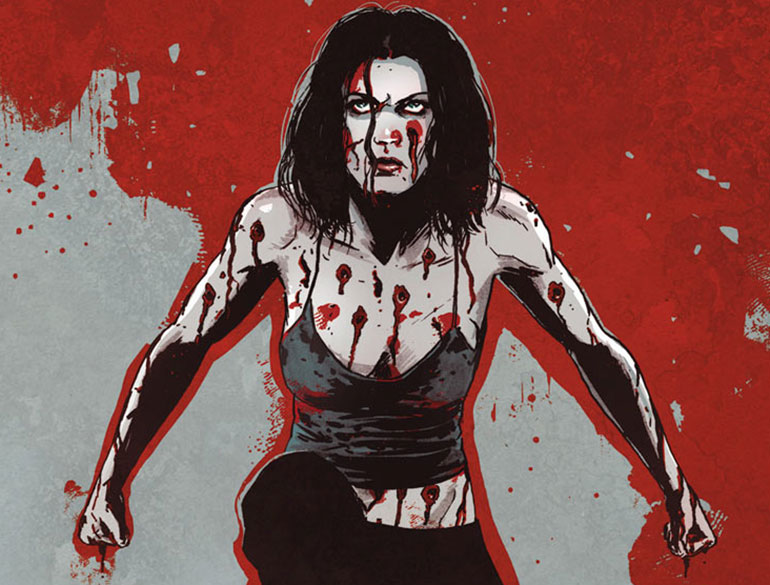 Welcome to our penultimate inaugural interview for GAME CHANGERS, a new series at Comicosity looking at female protagonists in comic books from the last decade or two (or more!) — and the original creators who brought them to life.

Today, we speak with writer Greg Rucka once again about one of his most fully realized, and yet youngest, characters: Forever Carlyle of Lazarus. Currently entering her third arc in the creator-owned series at Image Comics, Forever is another strong female protagonist that the writer is more than willing to let occupy his brain — and ours — to mixed discomfort and delight.

Who is Forever Carlyle? 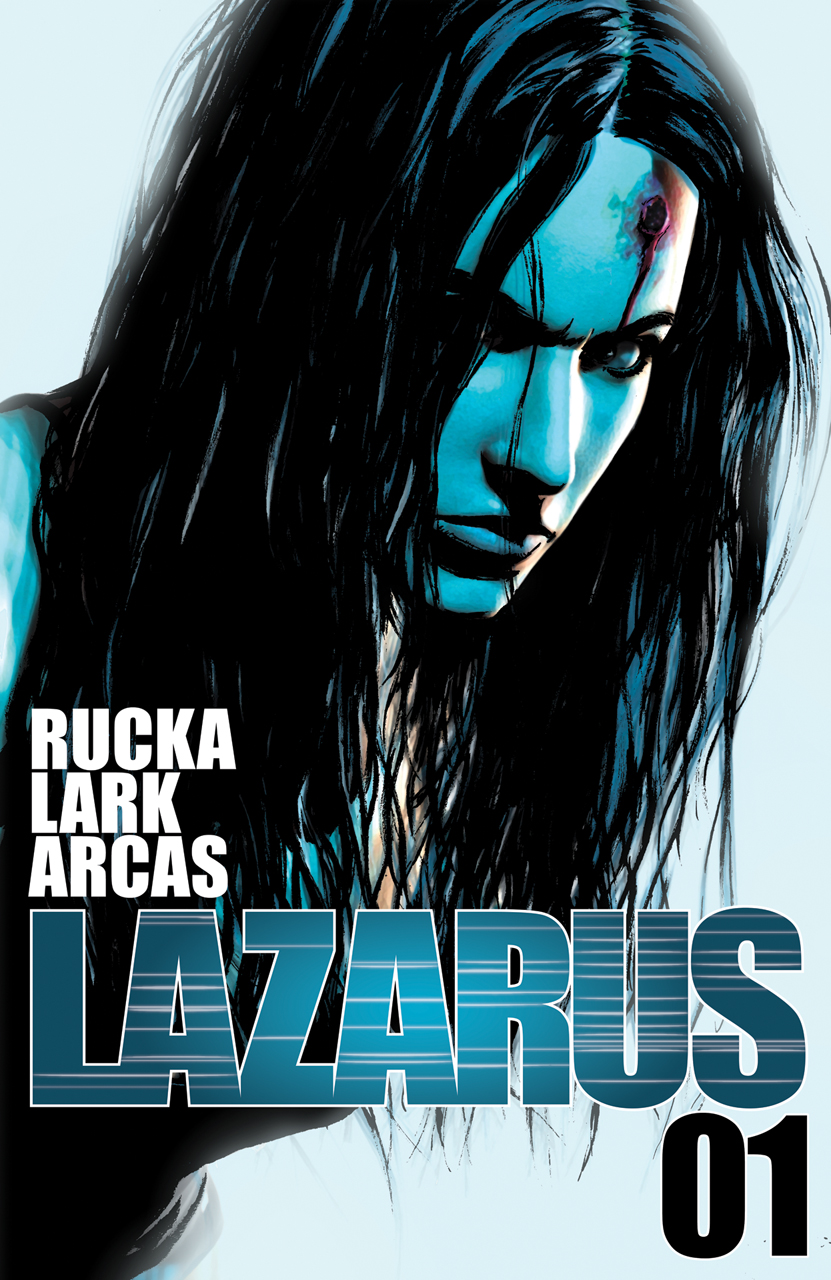 In the future, civilization will no longer be governed by civil liberties, democratic office, or merit of any sort. Wealth is the only determinator, and the top .001% of the families on Earth now control it. The rest of the population is divided into two categories: Serfs, those who are useful to the families, and Waste, the vast majority of the population left to fend for themselves. And one of the strongest families is the Carlyles. And they maintain that strength through their Lazarus, a genetically-modified tactician, soldier, and leader who just happens to be the daughter of the head of the Carlyle clan.

Forever Carlyle was raised for this one purpose only: to protect her family, by any means necessary. The only problem is, there are forces that would like to expose the Carlyle family and open Forever’s eyes as to their true intentions. She’s never questioned them before now, but doubts have begun to develop. It is only a matter of time. 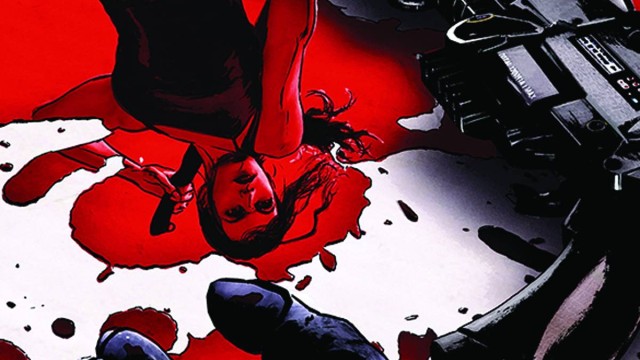 Matt Santori: One of the things that is significantly different about Forever Carlyle in relation to your other characters is we get to see her as a child. How has including that aspect of her history on the page changed the way you approach her?

Greg Rucka: This is hard for me to answer for a couple of reasons, not the least of which is running the risk of veering into spoiler territory.

In thinking about Nature vs. Nurture, Forever is, very bluntly, a genetically-created person. She is built to be what she is, and then she is nurtured specifically to fulfill that role. So, both her nature and her nurture are built toward being this thing, the Lazarus for the Carlyle family.

One of the core questions of the series is, at what point does that break down? Because everybody knows it’s coming. If you’re reading it, you know it’s coming. At some point, she’s going to say, “No. I will not do this. I will not be this thing any more.” Whether or not she is successful in that attempt is a core dramatic question.

With those sequences, I wanted to show what that childhood must have been like for her. It’s nothing deeper than that. There’s more going on there that I can’t talk about without giving spoilers, but I am absolutely honest in that what I wanted to show was her miserable childhood. It kind of stinks, doesn’t it?

That scene with her and Marisol at the beginning of issue #7 is based on an actual training practice. You have to have the ability to master pain, because you are never going to be in a fight where you’re not going to get hurt. Being hurt is not the same as being wounded, and one’s ability to work through pain is pretty crucial. Thus, we show this sequence in the book where Marisol is having to hurt her.

Marisol, who for all intents and purposes is Forever’s surrogate mom, is beating her. That dialogue sequence at the end where Marisol is lying to Forever — saying the things she’s supposed to say for the lessons she wants her to take — makes it abundantly clear that, if ordered to kill her, Marisol would not and could not do it.

MSG: One of the things you brought up when we first spoke about the book pre-launch was the Bechdel Test. Your thoughts now on whether or not Forever ultimately passes that test?

GR: Well, in the first issue, she certainly didn’t. I think as the series has progressed, she does.

It’s funny. What’s the Kelly Sue DeConnick quote? “Why don’t we call it the novelty lamp test?” [i.e. Does your female character serve more or less a role in the book than a novelty lamp would?] For our purposes, that may well be better.

If we’re talking about this, Veil [of the Dark Horse series] intentionally fails the Bechdel Test, very deliberately from the get-go. That is a book about how men treat women, where the only women you see apart from the main character are asking, “Can I take your order, please?”

With Lazarus, the scale and the scope are much larger. Forever’s interactions are therefore governed entirely by where the story is at any moment. The beginning of the story was at a place where there weren’t any other women. By the time you get to issue #2, there are more. And by the time you get to issue #5, Forever is interacting with women left and right. In fact, the dagger team she commands are a fifty-fifty split.

It’s funny. In Carlyle’s future, you are discriminated upon on the basis of wealth, but not on gender, race, creed, or color. None of that. That doesn’t matter to them. What matters is, if you are going to be lifted, you have to be the best person for the job, and they don’t care if that means the best person was Black. Big deal. We got the best person. That’s what we wanted.

MSG: I noted somewhere online a discussion about how different Forever’s appearance is from the rest of her family, i.e. skin tone, build, etc. Can you talk a little bit about that deliberate choice?

There are two choices there. One is a story-telling choice. Her look deliberately sets her apart. The other is a story choice. We’ve already said she’s been genetically-modified. She was made. She was grown. And, we haven’t seen her mom yet. She does bear some physical resemblance to her siblings, but her coloring is different. She’s much “darker” in hair, eyes, skin tone. She’s a bit duskier.

And that is all by design.

We have the cryptic message at the end of issue #4: “This is not your family.” What that means is not going to be revealed for a while yet. It will come back into play in our third arc, “Conclave,” but it’s not going to be until the end of the fourth or fifth arc — around issue #25 — where we start getting answers about that.

“Forever is strong, bold and willing to look deeper into those she should love and trust the most. She has the unbiased detective heart. It’s what we should all have, even when we’re conditioned to look past or defend the evil of those whom have met our basic needs.”

“Forever is my girl. It’s great to see a woman of strength who is somewhat naive about the world around her, and to watch her undergo personal growth as she begins to question things. I can identify with the dutiful daughter who wants so badly to please; baby! Forever resonates so deep in my soul it’s a little scary.”