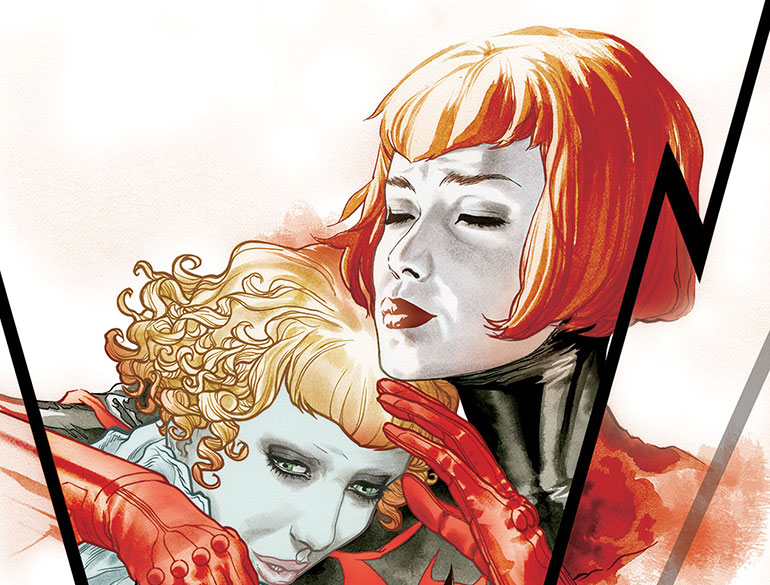 Welcome to the fifth installment of the inaugural interviews for GAME CHANGERS, a new series at Comicosity looking at female protagonists in comic books from the last decade or two (or more!) — and the original creators who brought them to life.

Today, Batwoman is not only one of DC Comics’ highest profile female characters, but she is also the only lesbian character to helm her own title at the moment — at DC Comics or any publisher. Her successful introduction to the DC Universe and the readership at large is owed mightily to the work of writer Greg Rucka, with whom we now speak once again to hear about the creation of Kate Kane, the modern day Batwoman.

Who is Kate Kane? 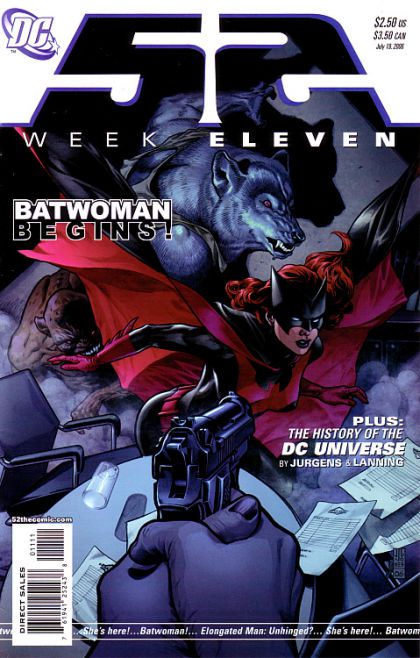 Kate Kane may have began life as the daughter of a military man looking to follow in her father’s footsteps, but life carved out a very different path for this determined and talented young woman. Having experienced the death of her mother and seeming death of her twin sister Beth, Kate threw herself into service as a cadet in the United States Military Academy. While she received high marks and ranked at the top of her class, Kate’s military career was undone when she refused to lie about her homosexuality and was subsequently dishonorably discharged under “Don’t Ask. Don’t Tell.”, the prevailing military policy of the time.

Returned to civilian life an heiress due to her father’s remarriage, Kate had a late night encounter with the Batman that put her true purpose into perspective. Donning the cape and cowl for her own mission — independent of the Bat-family — Kate would become the vigilante known as Batwoman.

As time progressed, Kate would come face-to-face with her own sister — alive and transformed into the mad villainess Alice — and other devotees of the Crime Bible. These disciples believed Kate to be the key to their prophecies and made multiple attempts on her life. Through the intervention of her former lover Renee Montoya, Kate survived. Today, she partners infrequently with her cousin, the hero known as Hawkfire, and is engaged to Detective Maggie Sawyer. 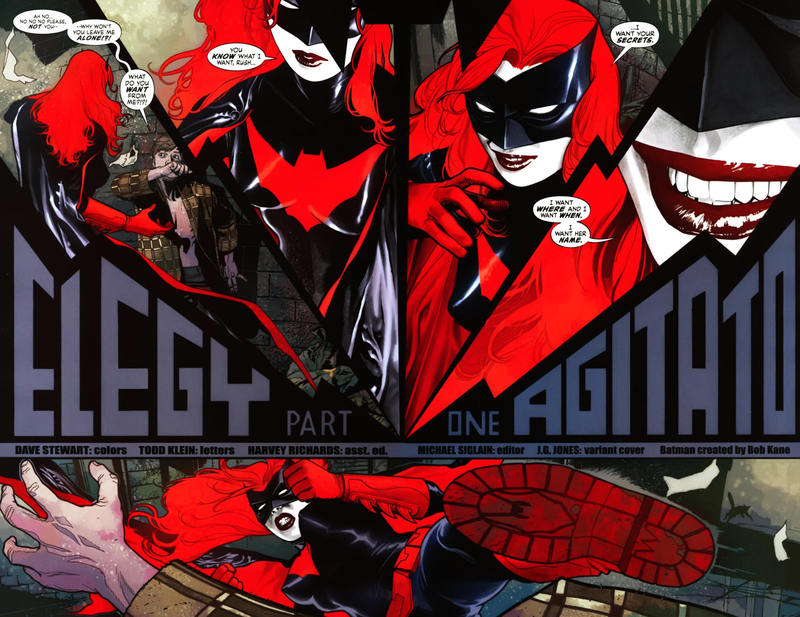 Matt Santori: A lot of people probably ask you about introducing Kate as a lesbian character, but I actually want to start out by asking about your decision to make her Jewish.

Greg Rucka: I simply wanted another character who was identifiably Jewish.

For a bunch of characters that were arguably all created by a bunch of Jewish men, very few of them are actually Jewish and identify as such. And I have encountered more than one instance in my career where professionals have cited the core strength of a character in being their deep commitment to Christ. It always struck me as a little silly, because if you were deeply committed to Christ, you wouldn’t be going out and breaking someone’s jaw on a nightly basis. That ain’t what Jesus taught.

We knew she was queer. There was no question about that. The mandate was to reinvent Batwoman and she’s going to be gay. That came down from on high. I guess I just thought, “Well, why not do it?”

It’s interesting, because it’s something that J.H. [Williams III] really latched onto, mostly because he had done a far amount of reading and research on spiritualism. Add that to working with Alan Moore on Promethea and he came back to me with a whole ton of ideas involving kabbalah.

And for me, it might have been subconscious. Kitty Pryde’s Judaism was very important to me when I discovered it. She was the first Jewish character I’d seen, and she was an X-Man. That mattered to me. Perhaps there was a small element of that, too.

MSG: One of the other ways in which Kate is differentiated from much of the Bat-family is her relationship with her father.

You have to understand — everything that was done with Kate, with the exception of that question of her Judaism, really was put under the microscope by myself, Mike Siglain, and J.H. Williams. We really thought about it.

Early on, I wanted her relationship with her dad to be a good one. In the Bat-paradigm, Jacob is to Kate as Alfred is to Bruce. Every so often, I’ll see someone saying that Alfred is Bruce’s surrogate father. I take great issue with that. I don’t think he is. Alfred is his surrogate mom. Gordon is his surrogate dad.

Alfred takes on a lot of what we traditionally consider the stereotypical feminine roles. He is the housekeeper. He is the caregiver. He kisses the boo-boos. He holds young Bruce at night through the tears. It’s Gordon who’s a depiction of positive masculinity in many senses.

But I wanted Kate to have a support network — which is what Jacob was. He had to back her play. I knew very early that we were coming out of a military background with Kate, so he needed to embody the best of that, just as Gabby had to before she dies. We had to see the best of what that culture can offer. That sense of honor and personal responsibility, integrity and service. You do what you say and you say what you mean. And the belief that you are responding to something that is higher, or outside of you. It’s not about your own gratification.

MSG: That leads into my wondering about the transition from Kate’s military service into a life of vigilantism. How did that evolution work in your head?

GR: I don’t think that she sees a difference in the mission.

Having gone through this whole story with Huntress and Batman in No Man’s Land, I really didn’t want to go through another one of these first generation characters who was going to be shat on by the Batman. Someone who was going to be told, “You have to do it my way.” or “You’re not good enough.” or the like.

I wanted to express that idea of a rise to service, or answering that call. I’ve always felt that Kate doesn’t care what Batman thinks. She couldn’t care less about whether he approves or disapproves or whatever. He doesn’t have a monopoly on the Bat, as far as she’s concerned. It’s too big. It’s like saying I have a monopoly on the American flag. No, you don’t. It’s a symbol for an ideal, and Kate is servicing that ideal. That’s what she believes she’s there for.

That’s also why I so dislike the idea of Kate and Bruce being related. I think that her separation from that is crucial to who she is. Her independence is entirely self-defined, and she is entirely self-motivated.

She sees this symbol. She has one encounter with Batman, which is not a personal encounter. It’s an instance where she sees “I can be that.” And she dons the uniform. That was always how we thought of it. Kate’s not wearing a costume; she’s wearing a uniform. And she treats it with the respect that a uniform is due.

Everything she does while in uniform is to the purpose of this mission as described. It’s the desire to serve this higher calling — to protect the innocent.

But that aspect of her not caring what Batman thinks — I love that. “Yeah, I know. It’s yours. You made it. But guess what? It’s bigger than you.”

MSG: That is significantly different than the experience Batman had with the Huntress.

GR: Or anyone else. Look at that support group. They all answer to him. They all jump when he says jump, or they’re trying to. They all seek his approval. On one level or another, they all do it. Stephanie, Cass, Tim, Jason, Dick, even Barbara. All of them are under this umbrella.

I love this idea that Kate stands outside of that. She is a second-generation product of that higher mission. She’s happy to play well with them when it suits her, but she doesn’t work for Batman. She works for the Bat.

“I have a huge tattoo of Kate’s original bat symbol on my back (the one she had when she was introduced in 52). It’s on my back, to remind me of where I have been, and that I have the strength to move forward. For me, Kate Kane represents the strength to move forward, no matter what the world throws at you, as well as the determination to serve the causes you care about no matter who tries to stop you.

‘I finally found my way to serve.’”

“To DC Comics’ credit, Greg Rucka exceeded expectations in Batwoman’s pre-New 52 stories. His depiction of Kane’s painful path out of the closet, her unjustified discharge from the military under the now-repealed Don’t Ask, Don’t Tell policy and her desire to find meaning in life once again through her Batwoman persona, all rang as true as an autobiography.”

– J. Skyler, Comicosity
Excerpt from LGBT Visibility: Batwoman and the Agency of Marriage

“What differentiates Kate from the Batman himself is that she never seems to take her fight for granted. Sure, she puts on the same grim façade when taking down thugs in a back alley, but she has doubts and wounds that nag at her when the costume comes off.”