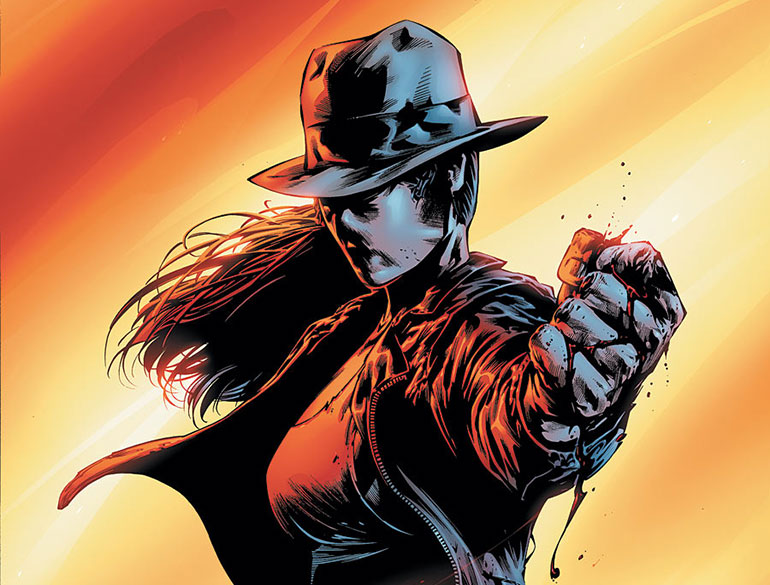 Welcome to the fourth edition of GAME CHANGERS, a new series at Comicosity looking at female protagonists in comic books from the last decade or two (or more!) — and the original creators who brought them to life.

And with this installment of our discussion with Greg Rucka, I am going to break my own rule. While Rucka was not the original creator of Gotham Central‘s Renee Montoya, it would be difficult to argue that he wasn’t the writer who made Renee into the character we all know today. No other character this week or next is as synonymous with Rucka’s commitment to powerful female protagonists as Renee. And so we proceed… 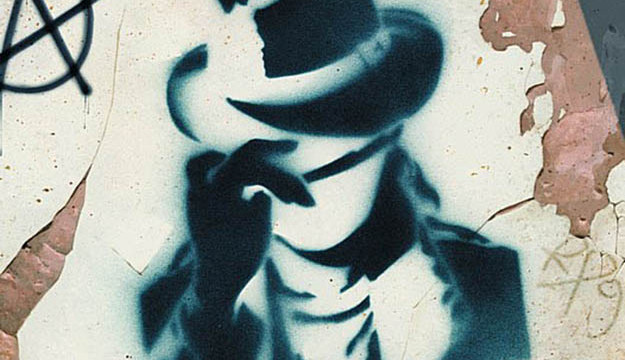 Who is Renee Montoya?

Renee Montoya has one of the most interesting origin tales in comics, having started out as a character planned to be introduced on television for Batman: The Animated Series. DC Comics pre-emptively introduced her in comic book form in advance of that airing, as a Gotham City Police Department beat cop. Eventually promoted to detective, Montoya quickly became one of Commissioner Jim Gordon’s most trusted colleagues, partnering with Detective Harvey Bullock, and later Detective Crispus Allen.

Quite unusually, Montoya began her second life under the pen of writer Greg Rucka. As a key member of the Gotham Central Major Crimes Unit, Renee was targeted by Two-Face and outed as a lesbian to her family, friends, and co-workers. Succumbing to the stresses of the job and eventually resigning from the GCPD, Renee fell into a deep alcoholism that only tutelage under the man known as The Question could resolve.

Upon the Question’s death, Renee took up the enigmatic blank face and became the new Question, partnering with the Huntress and the Birds of Prey — as well as her former lover Kate Kane, also known as Batwoman. 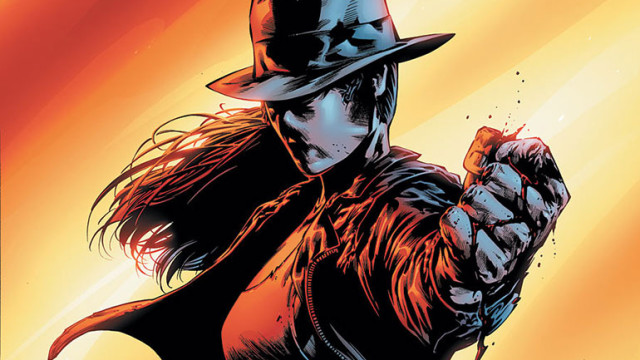 Matt Santori: How does it affect your connection to a character when you are picking her up — as is the case with Renee Montoya — versus when you create her from scratch yourself?

Greg Rucka: You know, there’s a lot to that question. Part of the delight of working in mainstream comics — and at the Big Two in particular — is that you get to play with these wonderful, wonderful toys. These characters are like a well-loved baseball glove. They’ve been adored through the ages and treated with varying degrees of success and care by so many people.

When you get to write an established character, it’s a privilege. You are given custodianship for a little while. When you do that, you have to be aware of their legacy, however short or long it may be. And everything you do will be informed by that, on one level or another.

Renee was created first for the animated series, and in fairly short order, she was pulled into the Bat-books and used in a couple of stories. When I came into DC Comics, I pretty much entered directly. I mean, I went down the Bat-pole — I came in, the bookcase opened, and I was in the Batcave. I wasn’t up to speed on everything that had gone on in the comic books, but I was terribly up to speed on everything Bruce Timm, Paul Dini, and Alan Burnett had done. I had been in graduate school when Batman: The Animated Series started. And that was a ritual. We would tape them, so Jen and I could watch them together. So, Renee was very well realized for me before I ever got my grubby little paws on her.

The first thing I ever wrote for DC was a Montoya story. I had read up, around, and in support of that. But I knew she was queer. There’s at least one person out there on the internet that accuses me of “making her gay.” As far as I am concerned, she is the most authentically queer character I have ever written, in the sense that I didn’t make her gay. That was in her genetics. She was queer.

MSG: How did she speak to you so clearly about her sexuality that you heard it so resonantly?

GR: I really don’t know, honestly. There is an element of alchemy to all this. I don’t want to romanticize it, because I am leery of applying too much “magic” to the craft of writing. I do think there is something mystical about the act of pure creation, and then there are days when I will sit at my keyboard and experience cognitive dissonance. Writing is ultimately moving these abstract symbols about and if you put them in the right combinations, they make sense. But all they are is little pictograms.

And I knew those things. I just knew them. I also knew she had a brother. There was no basis for this at all. And one can argue that — I think unconvincingly — the actual canon before I got my grubby little mitts on her was that she was actually straight. She was dating this guy, and so on and so forth. To which my response is, yes. It’s called bearding. Just because she was dating a guy, or even sleeping with a guy, doesn’t mean she wasn’t queer. We are fortunately in an era now where that kind of argument is holding less and less water.

So, yeah. I genuinely don’t know. There have been times when I’ve tried to decipher it. She was what she was. She wrote the way she wrote. These are the things I knew when I wrote the story “Two Down.” And that was the first time I wrote a story with her. I don’t think it was my first story published with her, though. I think there was a prose short that got published before that, but it was the second thing I wrote. I had reached these other conclusions prior.

MSG: Renee also became something else entirely later on. You’ve spoken quite a bit about your love for Denny O’Neil’s The Question series. Tell me a little about how it felt to move Renee into that legacy position.

GR: Certainly during that era at DC, you could not accuse us of not considering what we were doing. You may not have liked what we did, but we did consider everything we were doing before we did it.

I remember having a long conversation about it with Geoff Johns. I love the character of the Question. And I love what Denny had done with Vic/Charlie. We were gearing up for 52, and were having conversations about both Renee and Crispus Allen. I think it was Geoff actually who said Cris should become the new Spectre. I remember initially being really resistant to both that idea and Renee becoming the Question, because it seemed to me that it was outside both characters’ very “grounded” bailiwicks.

Geoff pointed out to me, and I think quite rightly, that the DC Universe was a universe of super-heroes. There was a logical place to continue both Cris’s and Renee’s stories as individual characters, moving from that street-level groundedness that both had existed in to the more super-heroic corners of the DCU. That combined with laying groundwork for 52 — knowing thematically one of the things we wanted to do with Charlie — it became a very organic shift.

One of the other rules you bring to the table if you are trying to act with any responsibility in the DC or Marvel Universe — which are these big ongoing concerns — is, if you are going to remove something from play, you want to replace that. You don’t have to replace like with like. Ideally, you’re always adding to the universe. You’re growing it and not diminishing it.

So, if Charlie was going to die, someone else would have to be the Question. That framed the entirety of Montoya’s journey for 52.

Renee just means so much to me. I think she is such a remarkable creation, and I’ve loved writing her. There has not been a time where I have not adored writing stories for her. There are a lot more stories to tell. She’ll show up eventually in the new DC. I have no doubt about that.

As much as I adored writing Wonder Woman, if I have left any lasting mark, it was with Renee and with Kate.

MSG: I would absolutely agree. Renee’s coming out story in Gotham Central is remarkable as a story, and as a moment in history. It just resonates with everyone who reads it.

GR: I will say it’s a rare convention — even after all these years — where somebody doesn’t come up to me when I’m signing and want to talk about “Half a Life.” I guess that’s part of the reason I get so indignant at the reduction of and lack of such elements. There’s a responsibility, and nothing makes you more aware of the responsibility than when somebody comes to you and says, “This helped me. This saved me. It was there for me when I needed it.”

Words have power, and they need to be used responsibly.

“Renee is probably the realest woman in superhero comics, in terms of who I can relate to. She’s deeply flawed, and she goes through horrible things, but she never lets it change her intentions. Even when she loses her way, she still can’t ignore completely the problems around her. She also rocked that blue fedora harder than Vic did (sorry Vic I love you).”

“It was reading 52 that I first encountered Renee Montoya. I fell in love with the story of Renee’s transition from damaged ex-cop to masked legacy hero. Renee was everything I look for in a character – heroic, flawed, heart-breaking, inspiring At times, the reader loves her more than she loves herself. She was both an experienced pro and a stumbling amateur. I’m so grateful for the tales that were told and the care that was put into her story.”

“Montoya’s narrative describes the essence of intersectionality; She is Dominican, the child of immigrants, a woman (in law enforcement no less) and a lesbian. Through the pages of Gotham Central, we saw her progression out of the closet. It is a saga of pain, humiliation, reconciliation and triumph, the realities of which are not unknown to LGBT readership.”

– J. Skyler, Comicosity
Excerpt from Where on Earth is Renee Montoya, or Where Have All the Lesbians Gone?

“Montoya expresses clearly her belief that being gay is at the core of her being, not a so-called “lifestyle choice,” and that it is in fact a positive part of herself. No matter what institutions and preconceived notions crumble around her now, she has that admission to depend on. …[T]his foundation of self-worth and respect means the reader can fight back alongside her, reflecting back her righteous indignation and pride.”

–       Matt Santori, Comicosity
Excerpt from Comic Love: Better by Half