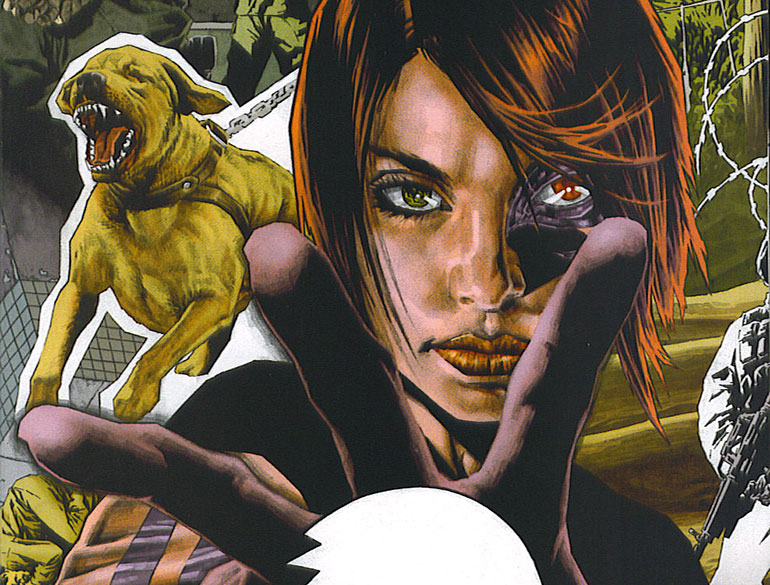 Welcome to the third edition of GAME CHANGERS, a new series at Comicosity looking at female protagonists in comic books from the last decade or two (or more!) — and the original creators who brought them to life.

Today, Comicosity is on to its third chat with writer Greg Rucka about another one of the brilliant female protagonists who have developed under his pen, Checkmate‘s Sasha Bordeaux.

Who is Sasha Bordeaux? 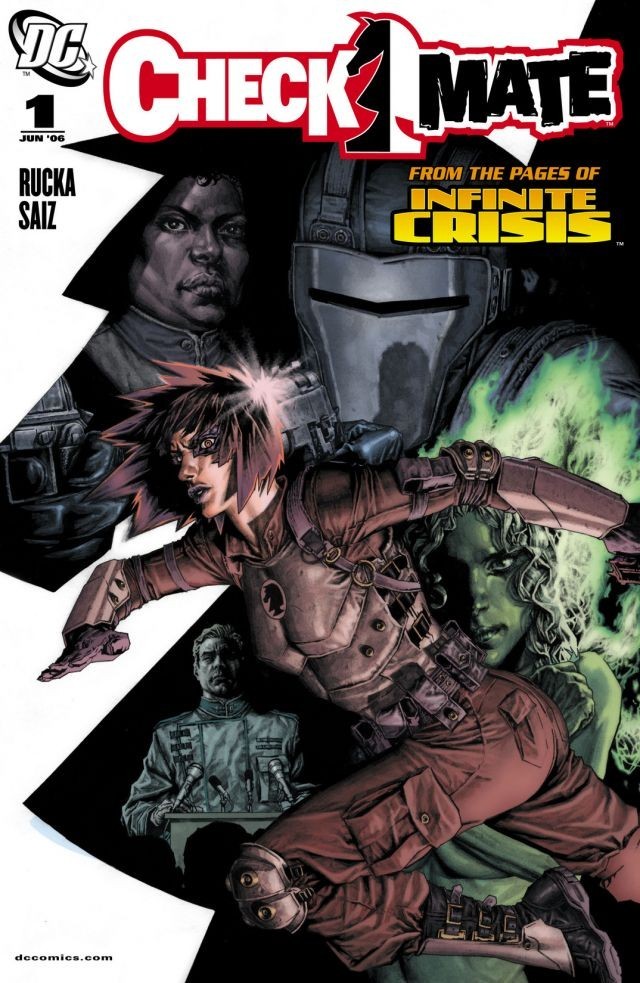 When Lucius Fox became concerned over the safety and welfare of WayneCorp’s CEO, former Secret Service agent Sasha Bordeaux was hired to bodyguard the billionaire playboy — never knowing what that assignment could lead to. From the moment she discovered Batman’s true identity, Sasha’s life was forever changed, taking her from costumed street vigilantism to a jail cell amid the murder investigation of Wayne’s latest girlfriend.

Eventually, Sasha’s name was cleared, but not before she became embroiled in the corrupt organization known as Checkmate. Beginning her life over again in Switzerland with a new face and mission, Sasha would be instrumental, alongside her former employer, in the downfall of the O.M.A.C. Project that threatened the world during the Infinite Crisis. Infected by the O.M.A.C. virus herself, Sasha became a cyborg, independent of Brother Eye’s influence, but with a new host of powers, including a cybernetic eye and nano-machines covering the weaker portions of her remaining flesh.

With the reformation of Checkmate under a United Nations charter, Sasha became the Black Queen, responsible for overseeing covert ops and maintaining the balance between human and meta-human in the organization. Alongside her new lover, the Justice Society member Mr. Terrific, Sasha kicked ass on a global scale and was even able to wrestle influence of the organization away from Amanda Waller, further protecting Checkmate and the world from her undue influence. 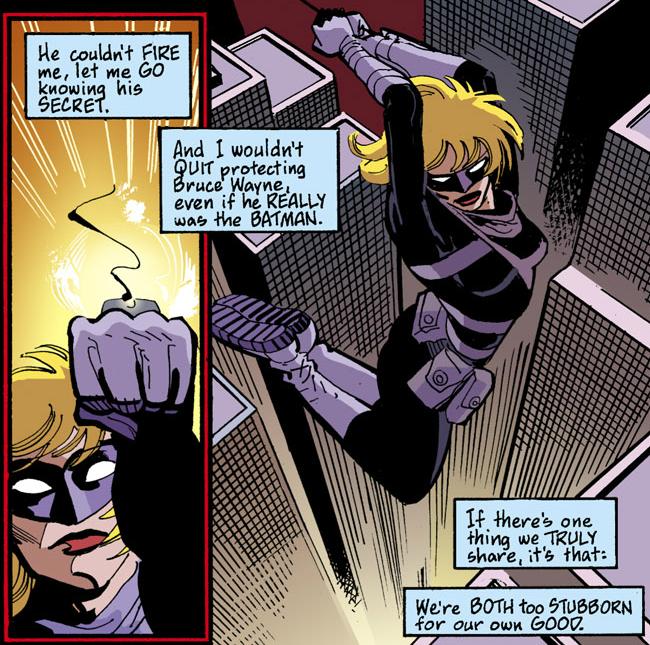 Matt Santori: In some sense, Sasha Bordeaux lived two very different lives under your pen — her time working with Batman and then everything that came after. When you initially created the character, what were your intentions for her?

Greg Rucka: When Sasha entered Detective, she came out of a conversation I’d had with Denny O’Neil about wanting to address personal protection. At that point I was deep in the Atticus Kodiak novels and it just didn’t make sense to me that the billionaire playboy — titular head of all of Wayne Enterprises — did not have personal protection. I could not imagine a board of directors standing for that.

That seemed to me to be a really interesting story. How does Bruce Wayne deal with the fact that he has a bodyguard who isn’t an idiot? Someone who is a professional security agent that knows how to do the job.

That’s where she came from. And it seemed to me that inevitably, if I was going to be fair to Sasha, she was going to have to figure something out. Eventually the penny would drop, and as soon as that happened, that put Bruce in a very interesting tension. Do I bring you in, or do I send you away?

My intention from the start was that any relationship they would have — professional or personal — was going to be doomed. I did not imagine it was going to be quite as doomed as it ended up being, because that was influenced very much by editorial edict surrounding a number of events in the Bat-books.

I just wanted a character who was going to be able to keep up with Bruce Wayne, because I am always far more interested in Bruce Wayne than I am in Batman.

MSG: That moment where Sasha ends up transitioning from being one person to another — did that arise out of an editorial dictate?

GR: Well, the editorial dictate was we were going to do this murder mystery. If the bodyguard was on the hook for it, then the logic of the story sort of demanded certain things. I didn’t want the character to vanish, in the same way that any other writer doesn’t want their characters to vanish. 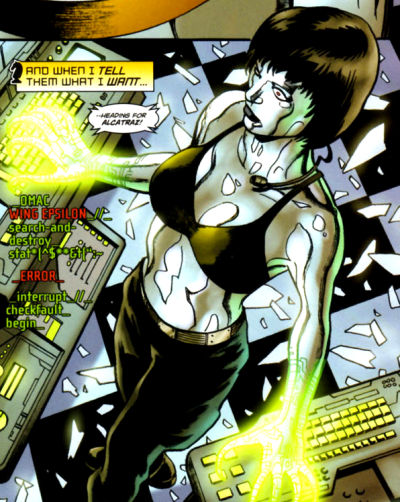 And I think she had merit. So the idea of taking that skillset and re-appropriating it for Checkmate was simply a defensive maneuver more than anything else at that point. It wasn’t done with an eye toward what would eventually happen in Infinite Crisis. That’s just one of those happy things that happens when you’re working in a universe as large and as deeply detailed as the DC or Marvel Universe. When you’re in it, and on your game, you can move very light on your feet. You see where the connections are.

Frankly, I loved second-stage Sasha. Sasha as the dupe of Maxwell Lord, as the Black Knight to the Black King (and becoming the Black Queen herself), I find far more compelling. One of the beauties of Batman that there is so much pathos in that portion of the DC Universe. There’s not a lot of pathos actually elsewhere. There’s a lot of attempts at pathos and there’s a lot of grotesque tragedy.

One of the reasons why, when they threw everything out and started over, that they didn’t start over with Batman is because they didn’t need to. Bruce has pathos. One of the things that made Sasha so compelling to me when we were doing Checkmate is she seemed to have inherited some of that. There was a lot of pathos to her life.

If there is a particular dramatic effect that one tries to create in the stories that we can tell, it’s really that sense. I really do believe that.

I mean, Sasha breaks your heart. I loved her relationship with Mr. Terrific. And I loved her interaction with Jessica and Josephine. Oddly, she was so incredibly human. There’s a lot of Tara Chace in her, obviously. I suppose you could say, if you were inclined to, she’s kind of a cross between Carrie Stetko and Tara. I’ve never really thought about that until now.

MSG: She really had these evolved relationships with other women, as you say, especially with Jessica Midnight.

GR: We wanted to do so much more with Jessica. There were pages and pages of notes about her backstory. We had stuff there. You got to see a little of it in the “Pawn 501” story, where you discover she comes from this legacy of magic.

And at the same time, we wanted to do more with Josephine as well. I loved the idea of Mademoiselle Marie as a legacy, as opposed to an individual. I just thought there was a beautiful poetry to that.

I guess we predate the Bechdel test here, but with Sasha, it mattered to me that she was surrounded by both men and women she interacted with as peers. They were professionals, but that professionalism did not deny them friendships.

“Imagine the most intimidating boss in the universe and you have Sasha Bordeaux. Not only does she have the balls to walk away from Batman, but she can stand toe-to-toe with Amanda Waller in a coup like no one has ever done in the history of the DC Universe.

When most people think of Greg Rucka’s DC Comics work, inevitably they lavish praise on Renee Montoya, and deservedly so. But for me, Sasha Bordeaux is the character that evolved more deeply than any other hero — male or female — I can think of.”