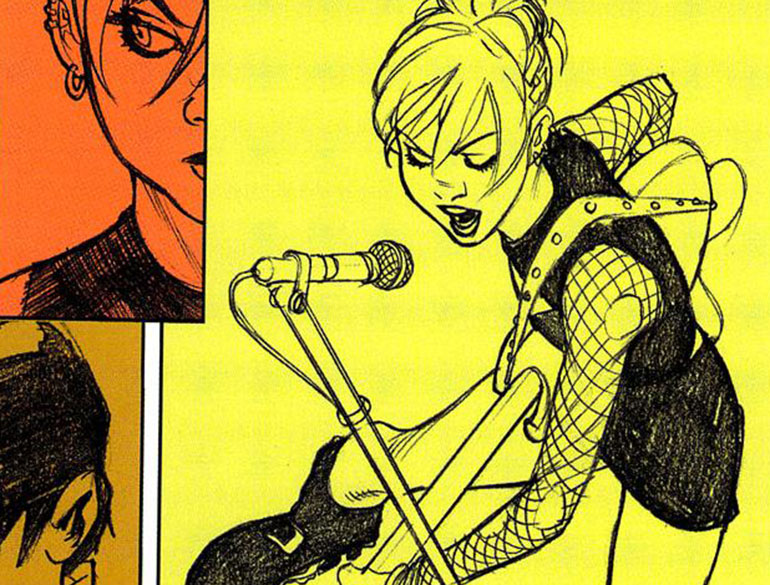 Today, we chat with writer Jen Van Meter about her creator-owned series Hopeless Savages, and its central character — the youngest of the punk rock turned suburban clan — Zero. 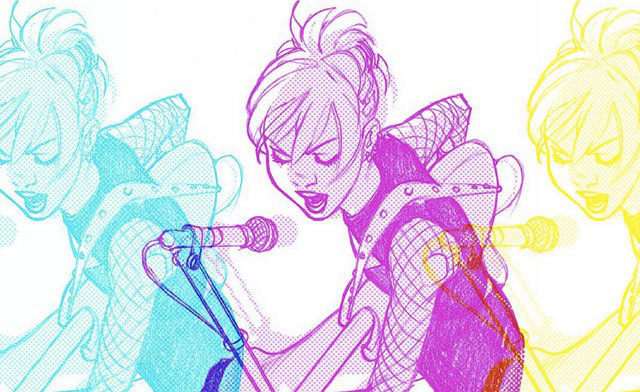 Part punk rock legacy, part kid just finding her way in the world, Zero is the youngest of the Hopeless-Savage clan and quite possibly the most outspoken and driven of the four children. Sister to Rat Bastard, Arsenal Fierce, and Twitch Strummer, Zero is the one poised to continue her parents’ legacy of music and mischief most precisely — although she is the beneficiary of their learned lessons as well.

When Dirk Hopeless and Nikki Savage leave the punk scene after a successful performing career to retire to the suburbs and raise a family, they didn’t exactly leave their eccentricities behind. While it’s not uncommon to find Dirk puttering around in the kitchen in his apron, Nikki maintains a connection to her professional past — remastering her old albums and even engaging in a Behind the Music-style documentary at one point. No matter what, however, Nikki and Dirk remain ardently focused on raising their children and maintaining one of the healthiest family dynamics you could read on the page.

Zero’s life is therefore not that unlike most teenagers, despite the punk roots spiraling back all the way to her birth name and beyond. She experiences first love with a boy named Ginger, gets harassed at school for having the name “Skank,” and forms her own band — the Dust Bunnies — who eventually tour on their own. Growing up right before our eyes, Zero is now a college student, and getting ready to embark on her next adventure!

Matt Santori: One of the things that strikes me most significantly about Zero is that she is a second-generation rebel. What kind of place does that put her in the narrative for you?

Jen Van Meter: I was myself a very reserved kid about things like activism and disrupting the order of anything. I didn’t have a ton of friends when I was young. Most of the positive interactions I had socially was with adults, because I was smart and I was behaved. Being smart and well-behaved were things I took pride in when I was really young, and then, when I hit 14, I found that I really kind of envied the kids who didn’t worry so much about their grades. They didn’t worry so much about getting gold stars all the time.

Envy is maybe the wrong word. I admired the social bravery of being willing to have people be angry at you, and being willing to be angry. It crossed over a lot of different social contexts and spectrums. The kids — especially the girls — who were willing to not be the “good kids” really captured my imagination. A lot of that carried over into that young teen phase, when you’re finding your own music and identifying “I am this way because I like the things I like. And I will identify with these people because they like the things I like.” It’s that moment in youth culture. 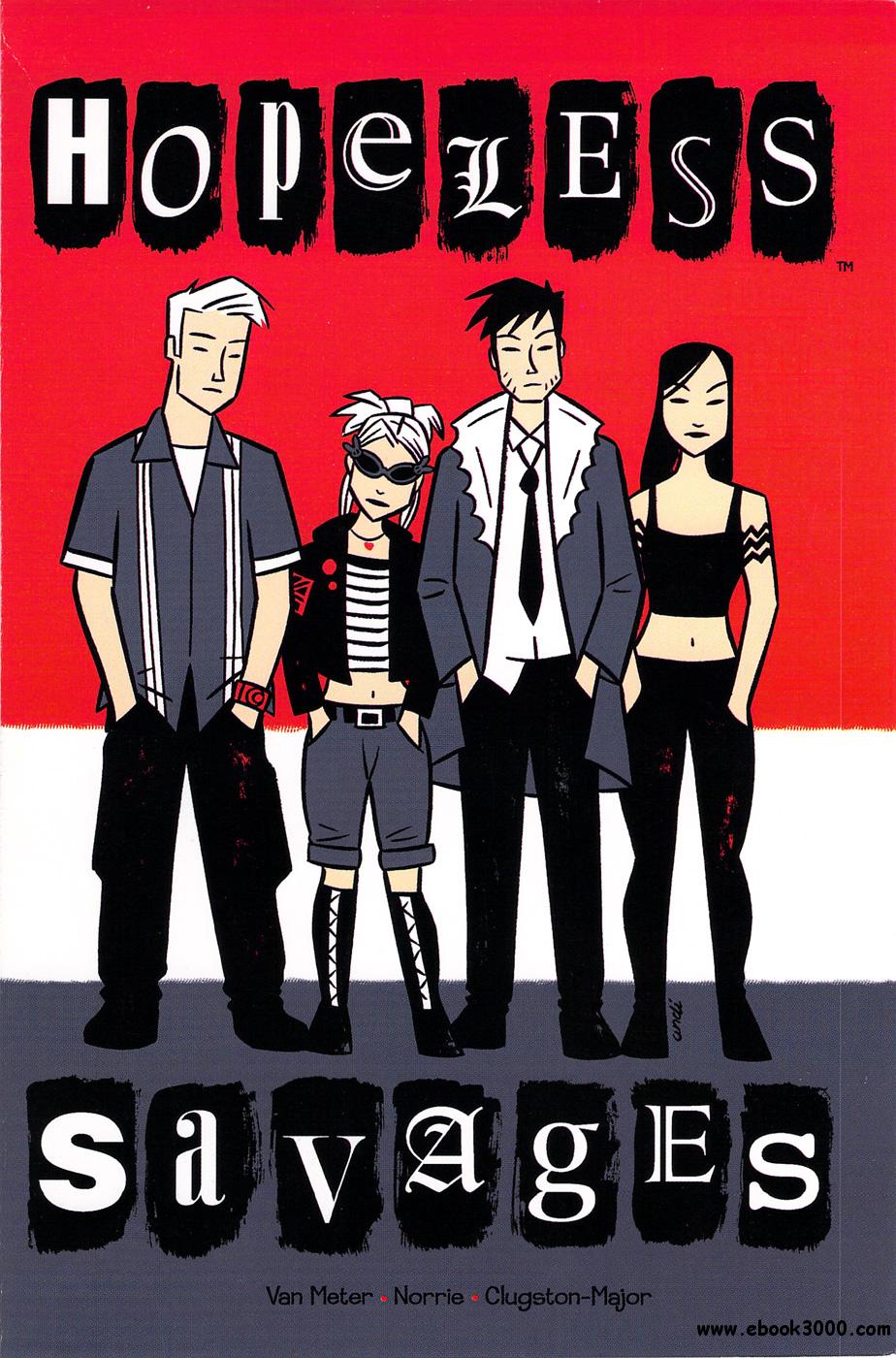 When I started Hopeless Savages, one of the things I wanted to write was that love letter to these nervy girls that I knew when I was younger and didn’t feel like I had the guts to be.

One of the things I was really aware of in my youth was that the downside to being the nervy kid was that you didn’t necessarily get the positive stuff. The bad side of the coin for me of being the good kid was the sense of being locked in a box, that people’s expectations were very controlled and controlling. And at the same time, I got praise from adults. I got really positive dynamics from teachers and authority figures.

When I was building the family, one of things I thought was, “How cool would it be to be rebellious like that AND also have a set of relationships with the people around you where that is respected and valued?” Because that was the thing that I didn’t see a lot of young people getting. In its own way, it’s a metaphor for second generation activism. What would it be like to have your whole family back your play, while you’re being rebellious?

So, it’s very light stuff, and I don’t tend to go to very politically fraught places in the Hopeless Savages material. That’s not really what those stories are for. But, in terms of a fantasy, I know if any of the kids go to a politically fraught place, their parents are right there with them. That’s what I wanted for the dynamic of the family, and what kind of a girl you can be if you have that environment.

MSG: The book really does delve into a ton of the family dynamic, but Zero’s relationship with Rat — particularly in opening up the series — seems to figure prominently.

JVM: As with many, many things in Hopeless Savages, stuff that starts in my head as one-liners or dumb jokes becomes richer and denser for me as you write it. In a pitch, a sentence like, “There’s this older brother, whose teenage rebellion means he goes off and works for a big corporation.” sounds like something out of a sitcom. When you’re writing it, you’re thinking, if you’re his little sister, all you want in the whole world is to grow up and be him. And then he goes and does this. He may as well have burned his passport.

It’s an amazing betrayal. And doubly so because it’s a betrayal of your parents and their values.

There’s a sense too of also wanting to set up a place where judging someone by what they’re wearing within this iconoclast punk rock family is just as bad as judging from outside it. So, part of Zero’s lesson is figuring out that he’s still her brother, and that this choice of his is potentially what he had to do. It felt awful for her, but I didn’t want to get out the big hammer for that piece of the story either. She’s six when it happens, and by the time she’s 15, she’s still pissed. But the idea of him still wanting to be her brother, and watching them build something out of that, was really important to me.

I really liked how Rat isn’t super visible or central in Ground Zero, but the role that he plays is kind of special and fun. I like the way that each of the siblings has a job for her in that story, in terms of the things that they can offer to solve her problem.

MSG: What is it like to write a character who ages over time? We see so many characters in comics that stay frozen in time, and Zero is clearly not one of those instances.

JVM: Very early on with the Hopeless Savages books, I figured out that, while the one sentence pitch is “A couple of punk rockers come out of rehab, have kids, and move to the suburbs,” the secret story is that the adult kids, especially Zero, are always a product of the choices made up until now by them, around them, and by their parents.

In my mind, Zero isn’t aging all that fast because I’ve taken her over the course of what I’ve written from about 15 to 19. To tell those stories, however, I have to go back and show you these snippets from her childhood. I think, in the context of that, all of these stories are about how we’re the product of everything that’s already happened to us.

There’s some interesting character development advantages to that. If I have her on the page being kind of a brat at 16 or 17, one of the things I can do to soften that, or explain, is go back and show the experience that justifies this brattiness in her mind. I can set up the context that explicates how she got this way.

And I’m fascinated by the way people tell their own stories, how we narrate our own selves and own experience. To me, it’s a natural way of talking about this young woman that I wanted people to care about. If you want to get to know her, you have to know what she was like at 6. You have to know about the crazy thing that happened when she was 7.

MSG: What does the future have in store for Hopeless Savages?

JVM: There’s a fourth volume in production now called “Break.” It’s set in the back half of Zero’s freshman year in college, when she and her friends plan a trip to take their little band on tour. All kinds of wacky mayhem ensues. There’s a rival band trying to ruin everything for the Dust Bunnies. It’s about Zero in the context of a group of friends which are her other family, who are old enough now to be alone on a road trip on their own together. They don’t necessarily have the adult back-up that all or some of them are used to.

It’s both about what’s going on at home while she’s having this adventure, and how Zero feels to be on the road without this safety net. And how she has felt her entire freshman year in college without that safety net.

It took a really long time for me to write it. When I finally looked at the finished script and art, I think it may be my favorite of the four. I’m very fond of them all in their own way, but it might be the best one. I’m pleased with it in a different way.

“It is around youngest daughter Zero that Van Meter’s story most steadily revolves, as the aspiring punk musician evolves from little girl to young woman. At the beginning of the series, Zero is a brash, determined child who speaks her mind unapologetically and gets in way over her head on a regular basis. [And] Zero’s maturation into her own person in high school is no less tumultuous than normal, despite her one-track desire to follow in her mother’s footsteps.”