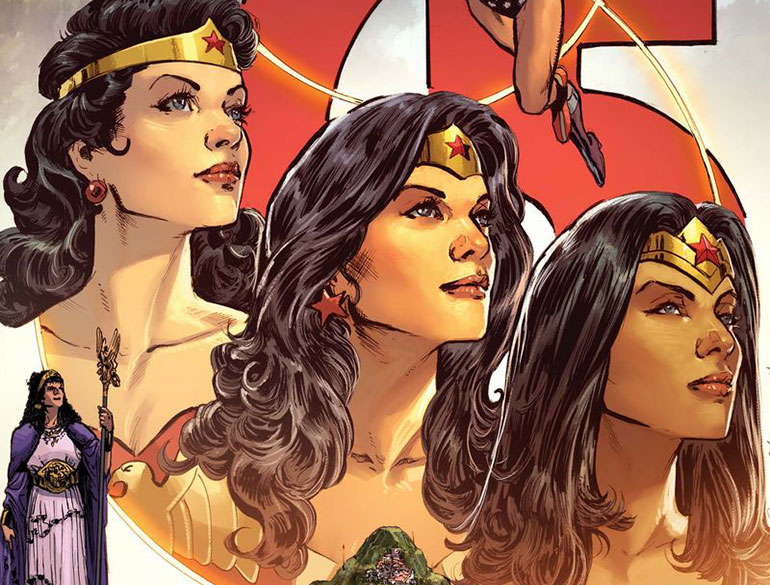 “What does Wonder Woman mean to you?”

John Ernenputsch asked me that question the other day as we discussed the opening of the film, and it made me realize that there are few characters in comics that could actually mean something to me, let alone countless others. 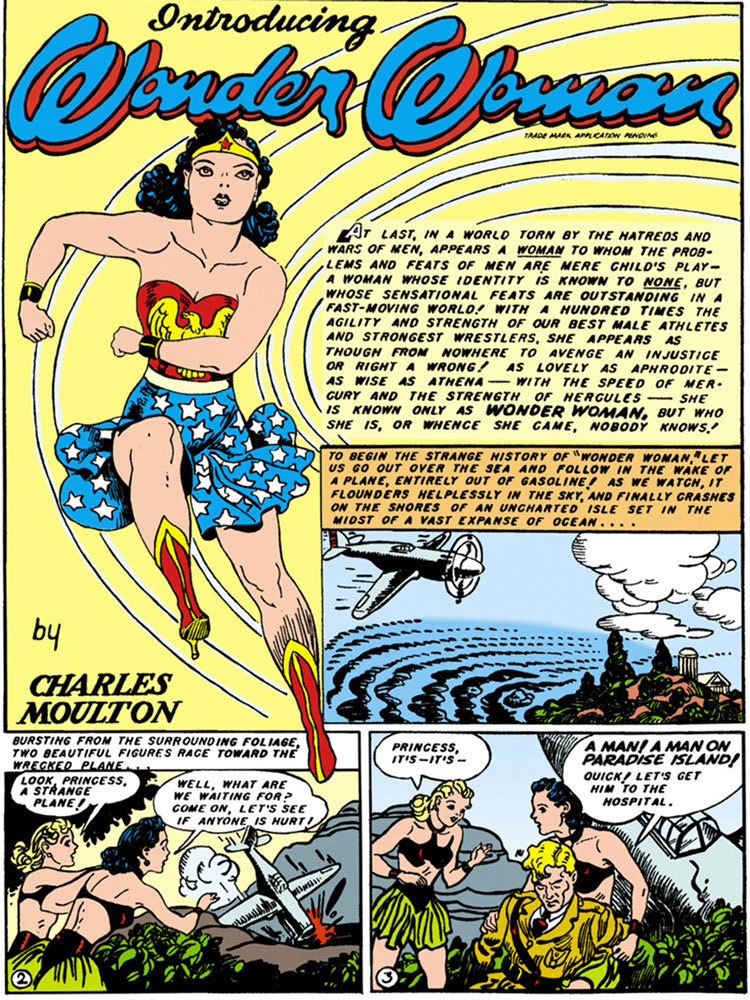 There is no denying Wonder Woman has become merchandising symbol that has helped so many little girls feel included. I occasionally saw her on a t-shirt or briefly in a comic. I did not have that personal connection to her. It wouldn’t be until I was over 30, and the launch of the New 52, that I felt any motivation to pick up a Wonder Woman comic. Controversy lead me to read older Wonder Woman comics. What I found is Wonder Woman is a continuous reflection of empowered ideals. These are stories of tolerance, justice, how to respond in the face of betrayal and more.

Since then she has become a favorite of my daughter, thanks to DC Super Hero Girls. The incarnation may be different, but Wonder Woman is still a leader in the school, despite being the new girl. My daughter says that Wonder Woman represents truth to her; that she is kind to all those around her.

Some heroes look to control and mold people and their environment. Wonder Woman accepts people and places while standing up for those who need help. She even helps her enemies when they are in pain or hurting. That’s because she recognizes humanity in all.

To me, Wonder Woman is a guide. She challenges you to think about how you approach your world. She is reflective of what was once American idealism: violence only when all else fails, peace and discussion when possible, and strength through hope. 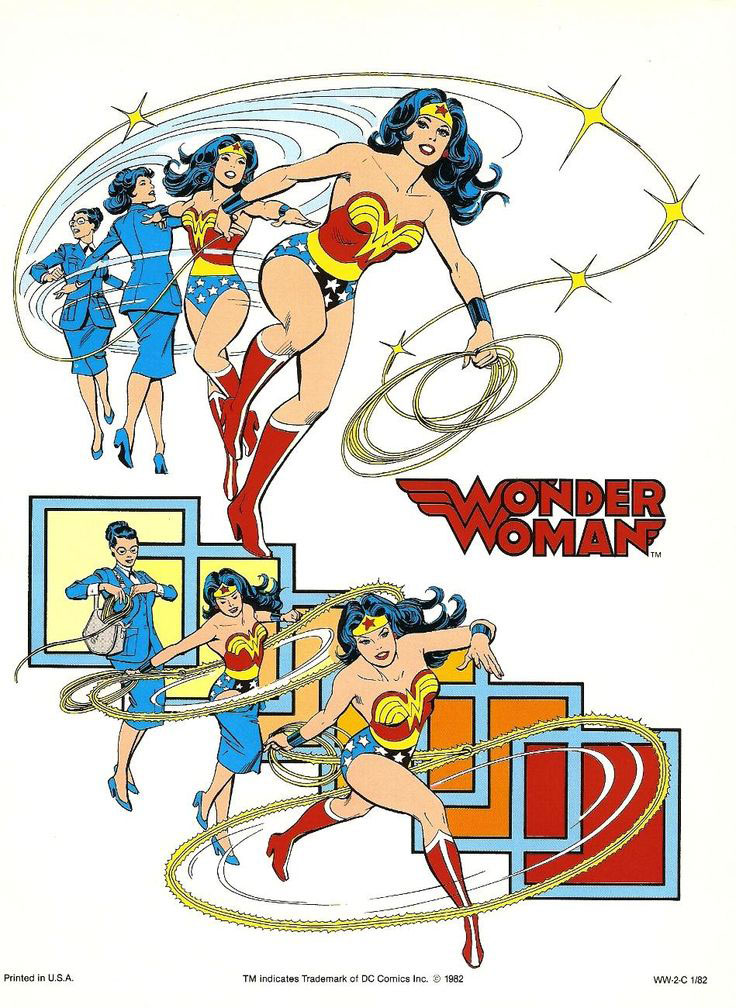 I thought about this question for a few days, and was prepared to give a long, drawn out answer about Wonder Woman’s place as the premiere female superhero that inspired the creation of countless others. I was going to rattle off some adjectives that describe her, and even make comparisons to the women in my life. At that point I realized that the most important idea of what Wonder Woman means to me is that it doesn’t matter what I think of her. I’m a 30-year-old cis, straight, white guy. I’m seriously among the last group of people whose feelings on Diana anybody should care about.

What does matter is what the little girl who is inspired by Diana feels when she sees a strong fictional female role model. What does matter is what members of the LGBT community felt when Diana being bisexual became an official part of the canon. What matters is how the character can be an inspiration to women around the world, and how it was horrible to reverse the decision to make her an honorary UN Ambassador for women. What matters is the joy and happiness that seeing the biggest female superhero as the lead of her own movie will bring countless amount of people. That is what Wonder Woman is all about, and I couldn’t be more excited to watch her legend continue to grow. 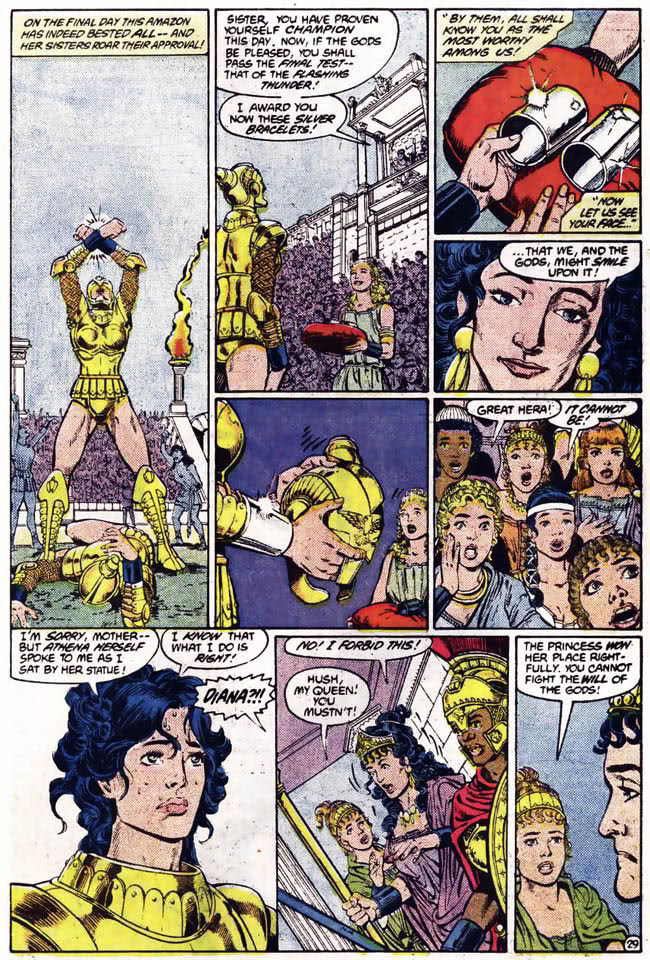 For me, Wonder Woman represents the resiliency of big ideas. There are a lot of things wrong with Wonder Woman. She often espouses bland, corporate-friendly girl power feminism. She’s been drawn and written by men way too frequently for who she is and what she represents. Her comics, all too often, aren’t great. She spent way, way too long not being canonically queer, and we’ve missed out on some great queer stories because of that.

And yet to millions, including me, she still means something. She’s the power of womanhood. She’s a place at the table. She’s genuinely great, moving stories. She’s grace and serenity and humor and peace triumphing over the ills of the world. She’s the Good Parts transcending the Bad Parts, a symbol to believe in and sustain you when you struggle.

She’s not perfect, but she shows that a tarnished tiara can shine just as brightly if you believe in it. 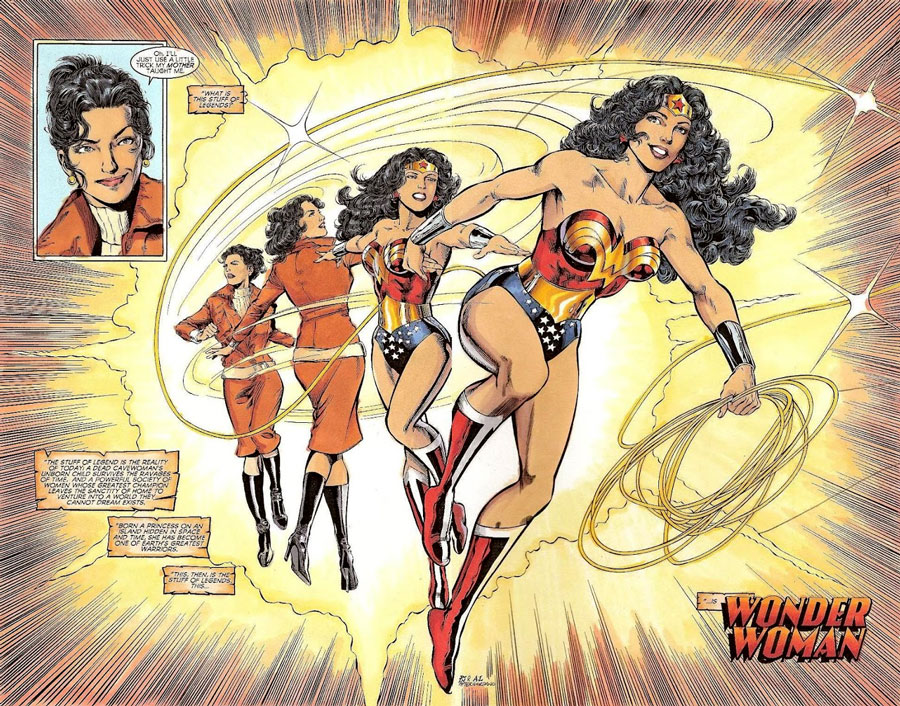 Wonder Woman is justice through peace. Her compassion is a lesson in humanity that we could all do well to learn. 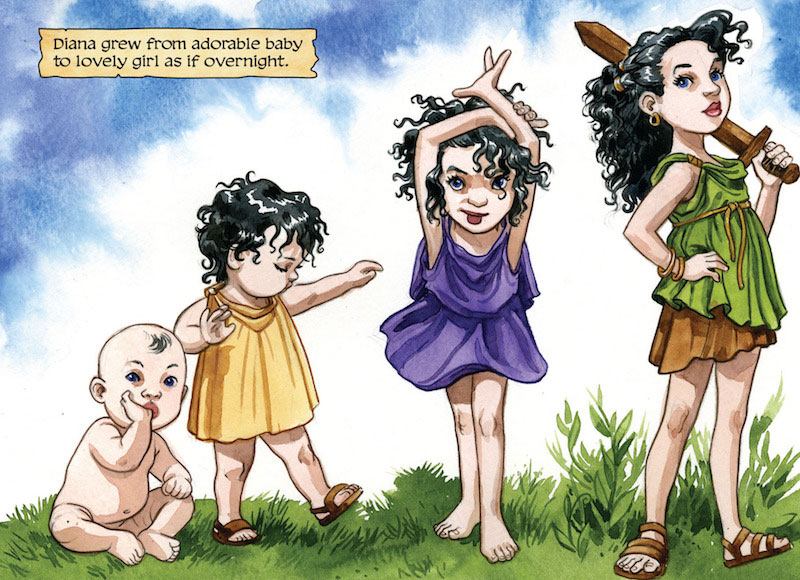 To me, Wonder Woman has always been at the forefront of any of the super heroes. She is part of the Trinity and as far as I am concerned each member of it stands equal with the other two. She is part of my earliest memories of watching TV as a kid both in the Super Friends and in her live action show. It makes me so happy to see what she has evolved into over time and I think that she is an essential model for girls and boys, women and men. We should all strive to find the divine inside ourselves, defend those weaker than ourselves, and seek to make the world a better place. 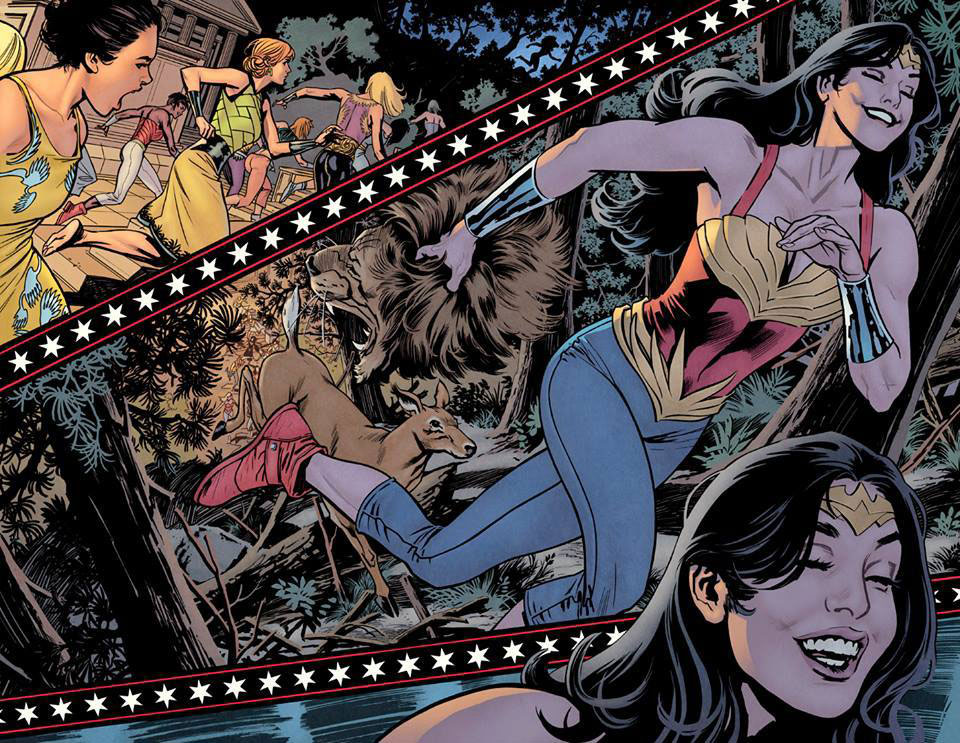 Wonder Woman embodies tension to me. Tension between the visual coding of American exceptionalism and white feminist power fantasy that problematize the character and the transcendent potential of the original concept. For all of William Moulton Marston’s wacky ideas, Wonder Woman was introduced as a fundamentally queer narrative that pushed a pacifist worldview meant to offer a respite from the violence inherent to superhero fiction and it’s been a struggle to recover it ever since. That vision only typically appears in fragments, but when it comes through in full force like Wonder Woman: Earth One or The True Amazon, it’s truly spectacular. The frustrating reality of Wonder Woman is that the fan base and their imaginations are far more progressive and inclusive than what typically, or even ever, actually appears on the page. 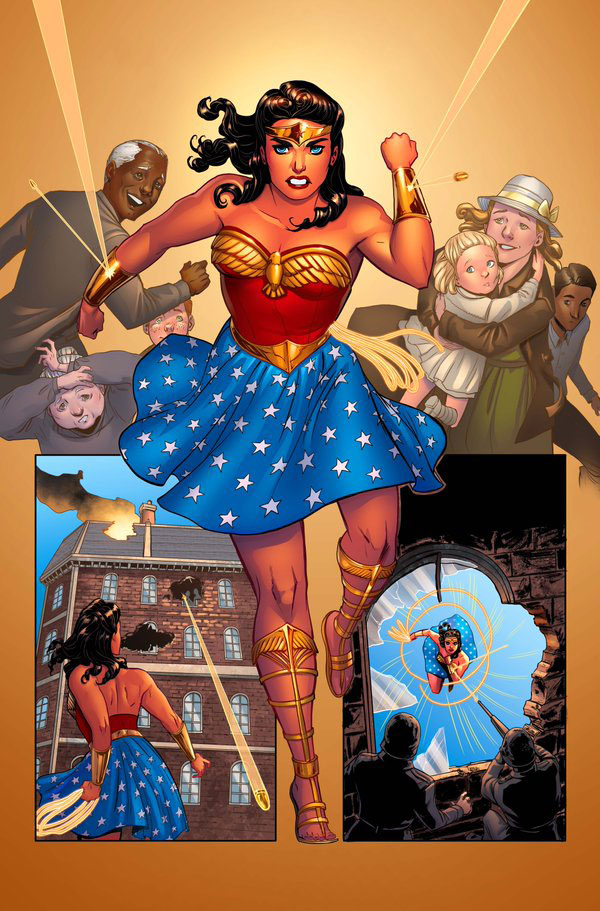 Wonder Woman isn’t a character I knew a lot about in my early comic reading years. The local book shop that brought in comics focused mainly on Archie and Marvel, so they were my wheelhouse by default. In the last several years, however, I’ve come to know a character who may just well be the greatest of them all, a character who is inspiring to all who read her, and even those who cannot read yet.

Wonder Woman really roared into my home with a vengeance a few years ago when my little girl (now almost 7) noticed that a) there was (in her words) “a girl in the Justice League” and b) she was immensely powerful. This “girl” could held her own with Superman and Batman, and when you actually looked beyond the mass media, she kicked their asses. That observation was followed shortly by the release of DC Super Hero Girls and before I knew it, my daughter was having a Wonder Woman birthday party. Now, there’s more merch in my house with those iconic yellow W’s than I can keep track of, and we even dressed the dog up for Halloween in Wonder Woman garb.

My little girl has never fathomed that women do not kick ass. She is growing up in a world where Wonder Woman is headlining a film, DC Super Hero Girls is taking over the world, Rey is the principal hero in the Star Wars saga, and sexism or the notion that men are somehow better or more powerful than women simply does not exist in her mind. Wonder Woman has been blazing that trail for decades, paving the way as a representation of true heroism that I am proud to have my daughter look up to (and that I am proud to look up to as well). To me, at her best, she embodies the ideals that humanity should strive to achieve, and I look forward to seeing that yellow symbol as a beacon of light for years to come. 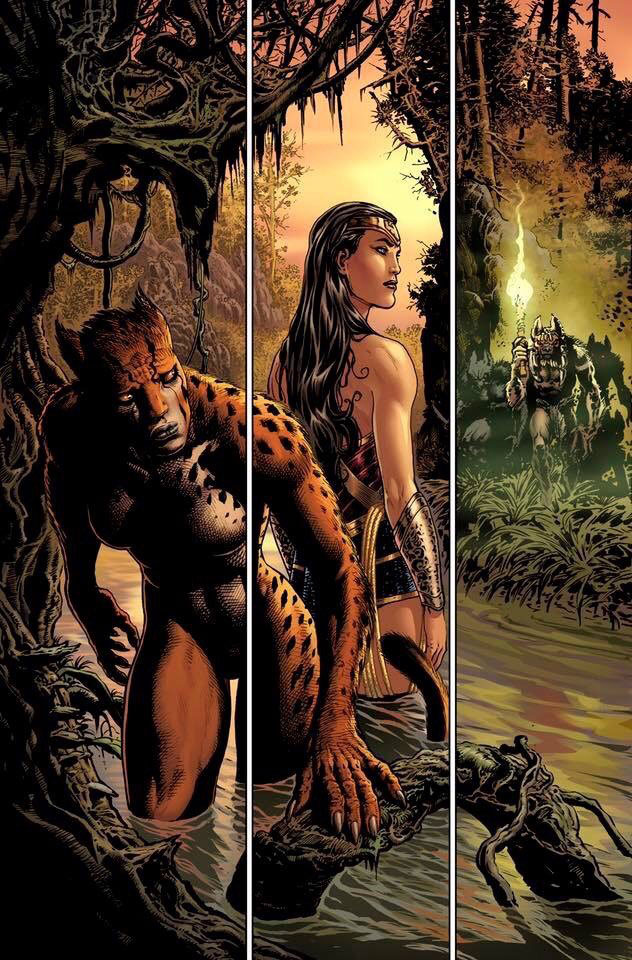 Wonder Woman is, for me, something to aspire to. Not that she belongs on a pedestal, I don’t think she should be treated as untouchable. She’s a mentor, and a friend, and when I’m steeling myself for a challenge or a trial, I look in the mirror and I see her standing just behind me, with her hand on my shoulder. “You can do this.” Wonder Woman embodies complete determination, not through force of will, but force of heart. In a world that seems to try to break my heart every single day, I need that strength. 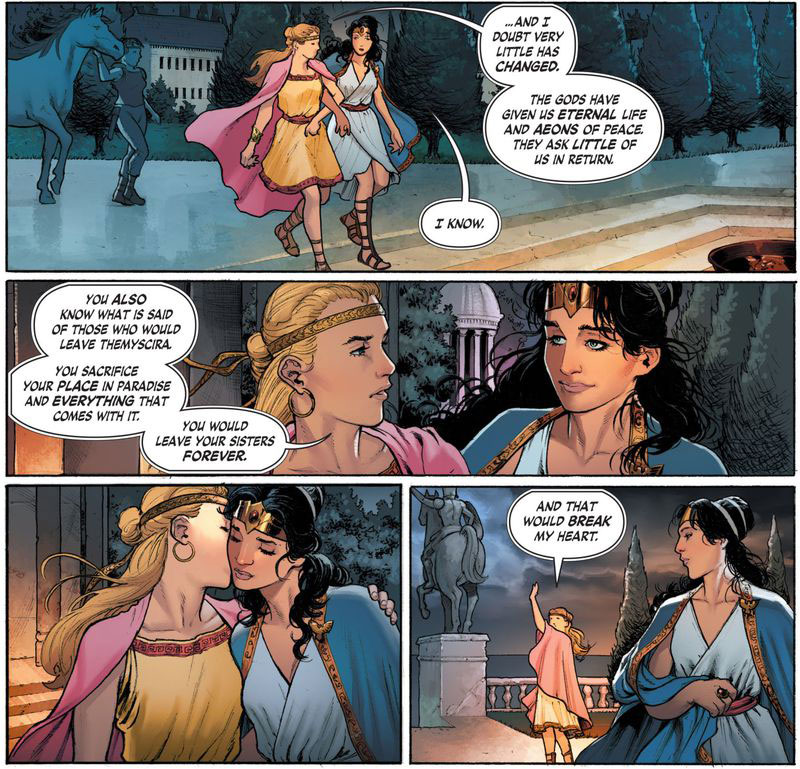 The thing about Wonder Woman is that she is simultaneously one of the simplest super-heroes to understand and one of the most complex characters in modern fiction.

Diana is, at her root, about one thing: love. She loves you. She loves me. She loves strangers she’s never met. She even loves her enemies. And she loves her friends, with a ferocity that is unrivaled. It’s that simple. She is the best of humanity and inspires the same in everyone she meets.

But at the same time, Diana is a complicated woman, possessing a depth of character that many fans mistake for inconsistency over her 75 years. She is ambassador of peace, an Amazon warrior, a costumed super-hero, a government spy, a goddess, a human, a monster-killer, and a protector of the innocent and guilty alike. She has a complex relationship to war and violence, willing to kill when no other options exist, but reluctant to give up on even a shred of potential redemption.

And the reality is: she is all of these things and more. We are used to our icons and myths having a certain two-dimensionality to their representations. But Diana of Themyscira defies that, and invites every one who puts pen to paper on her behalf to explore just how much like us she really is — only better.