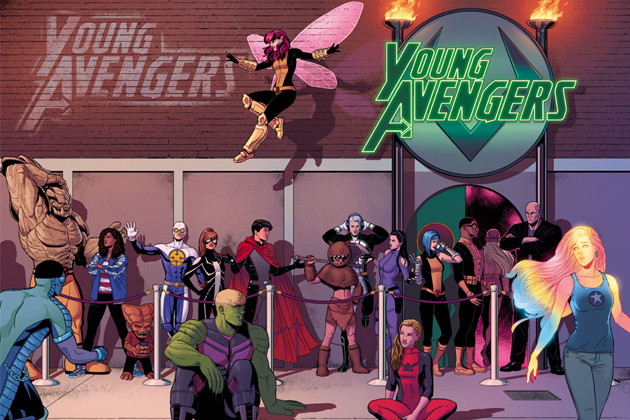 Marvel Comics has announced the “season one after party” of Young Avengers will be penciled by several guest artists including Becky Cloonan, Ming Doyle, Joe Quinones, Christian Ward & Emma Vieceli. 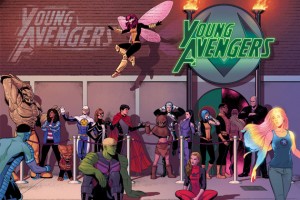 This December, a colorful throng of Marvel’s brightest young things queue up outside a New York nightclub to celebrate the first year-long season of Kieron Gillen and Jamie McKelvie’s YOUNG AVENGERS.

Billed as an exclusive after party, YOUNG AVENGERS #14 and #15 will bookend the New Year’s holiday with a series of connected vignettes drawn by McKelvie and a host of guest artists including Becky Cloonan, Joe Quinones, Ming Doyle, Christian Ward and Emma Vieceli.

“We’re calling in all our favors,” laughs Gillen. “It’s this epic, sprawling thing.”

“Some of them haven’t done much work for Marvel or haven’t done much super hero work, whereas some have” explains McKelvie¸ who will draw the opening and closing sequences of the two-part story of his guest collaborators. “But it’s all people that we think are brilliant. Like with Kate Brown who did her first American work in issue #6; it’s gone down really well and achieved everything we wanted it to in terms of putting her in front of that audience. Some of the artists are like that and then there are more established ones as well.”

“It’s like a gang,” says Gillen. “If this were Phonogram 3, these are the kind of people we would ask.”

“I would definitely have Becky on my gang,” adds McKelvie. “With a flick knife.”

Gillen agrees that Cloonan represents the hardest of the assembled guest artists on their crew. She already called dibs on the character she wants to focus on, and no one put up a fight.

In addition to uncontested DJ Noh-Varr and other mainstays like Kate, Teddy, Billy and Miss America Chavez, invitations have begun circulating well beyond the core Young Avengers team. Gillen stresses that he always looked at the cast more as a loose ensemble than a traditional super hero group.

“It’s a fun bit of minor mythology,” he explains. “That the kids get together on New Year’s and do this party and none of the adults really care. It’s all set in this one venue. We get the comedown, really. The title of the two issues is ‘Resolution’ which is obviously loaded in many ways.”

The writer describes the lead in, YOUNG AVENGERS #13, as an incredible high.

“And of course a high is almost the same as a low. It’s just a matter of perspective. A dance hall can be a wonderful place, but I think anyone who’s been dancing, properly, gets that Joy Division moment of being alone on a dance floor. So, it’s a resolution. As a teenager I used to describe parties as a time machine. Normal social life speeds up inside a party. And I suppose there’s a bit of that in there.”

“I’ve mailed around all the other writers at Marvel,” he continues. “I’ve asked who’s available and if anyone has any requests for smooching in the background.”

Even if the usual characters don’t get hot and heavy at this party, the writer promises super-powered macking in ample supply.

“It’s nice to see them happy for once,” he comments. “Except when they’re miserable.”