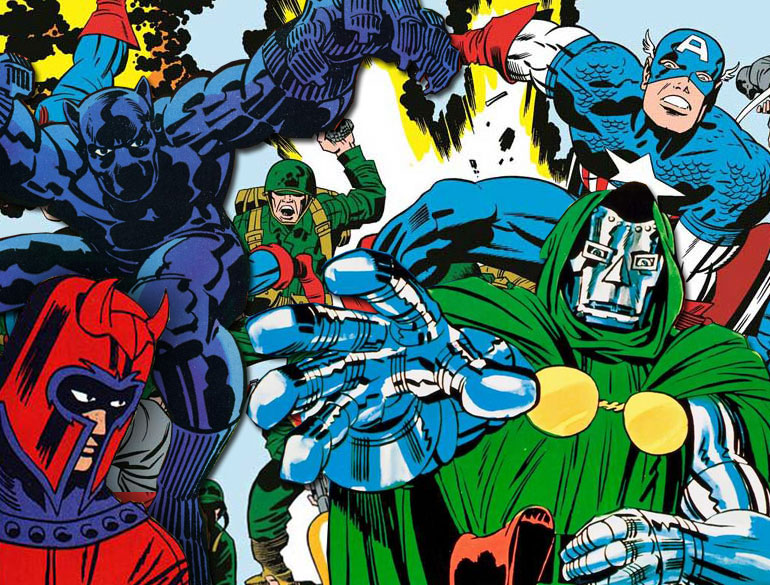 On this day, 100 years ago, a creative force was unleashed upon this planet.

Jacob Kurtzberg, better known to the world as Jack Kirby, is one of the founding fathers of comics and it is no exaggeration to say that without his mighty talent, the industry would not be what it is. His prodigious output during the early days of Marvel Comics and his vast creations at DC Comics have built the companies into billion dollar multimedia powerhouses that simply could not be without his genius.

With that in mind, we decided to look at our favourite Jack Kirby creations from his time at Marvel Comics. While not every single arc featuring these characters has been stellar over the years and the stewardship of some properties Jack created can be questioned, his brilliance in building the framework for what is the House of Ideas cannot be disputed.

So, without further ado, we give you our favourite Marvel Comics characters created by Jack Kirby: 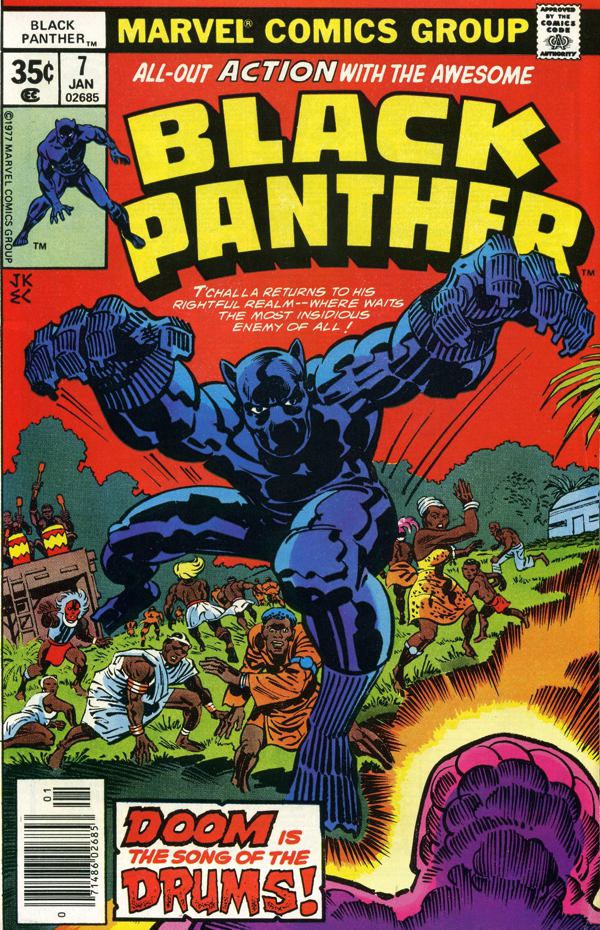 Black Panther has stood the test of time through imagination, intellect, and portrayals of the character that are cornerstones of the Hero and those that took up the mantle. Kirby gave us a Hero that stood up to and gave the Fantastic Four a run for their money when he debuted all those decades ago and ever since then Wakanda has become much more than another location in the Marvel Universe.

Like his work on Eternals, Captain America, New Gods, and OMAC…Kirby was creating lifelong characters that can sustain themselves through multiple iterations and carve out their own corner of the universes they were a part of and Black Panther is here, in 2017, doing just that. Black Panther means a lot more to people now than ever thought possible.

He’s a Black Superhero that has to juggle the responsibilities of the World’s Most Technologically Advanced City and its people, that means the world to some and is a beacon to many more. T’Chaka, T’Challa, Shuri, and other Black Panthers before them are portals for all manner of adventures and in the years since Kirby created the Black Panther character, his popularity and importance has been proven time and again in the Marvel Universe with no signs of slowing down.

Black Panther is a character that’s never strayed far from his roots but has instead been empowered and strengthened through being an intellectual hero and a crimefighter when he needed to be. Jack Kirby created heroes for the ages, it just so happens Black Panther keeps up with them. 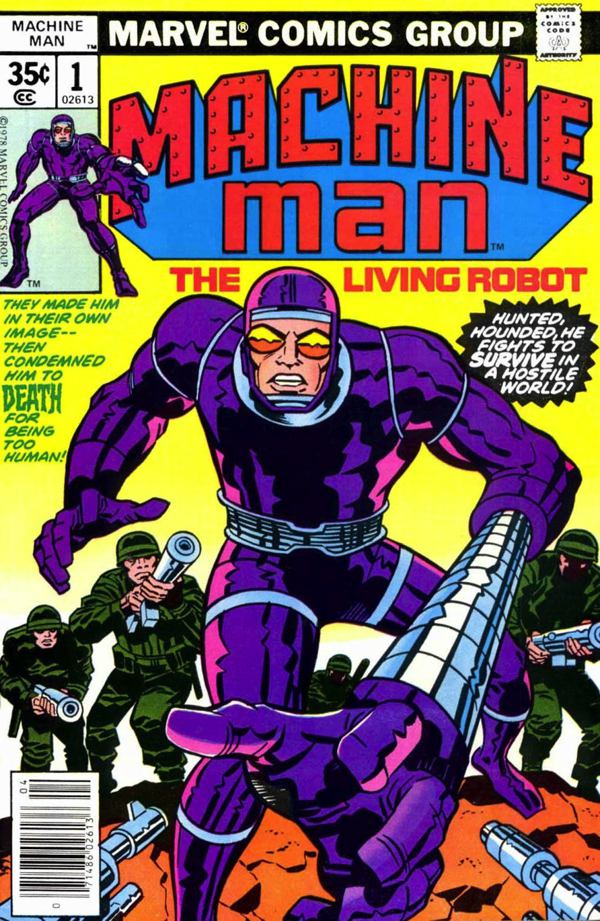 Visually one of the most interesting characters created by the man renowned for character design, Machine Man was one of the last characters Kirby created at Marvel. Machine Man is a tragic figure, a Pinocchio in search of meaning in a world that hunts him. Always asking one of the core science fiction questions – what does it mean to be human?

Though my love of the character came first from the Herb Trimpe/Barry Windsor-Smith mini, I have a soft spot for the Kirby and Ditko issues. 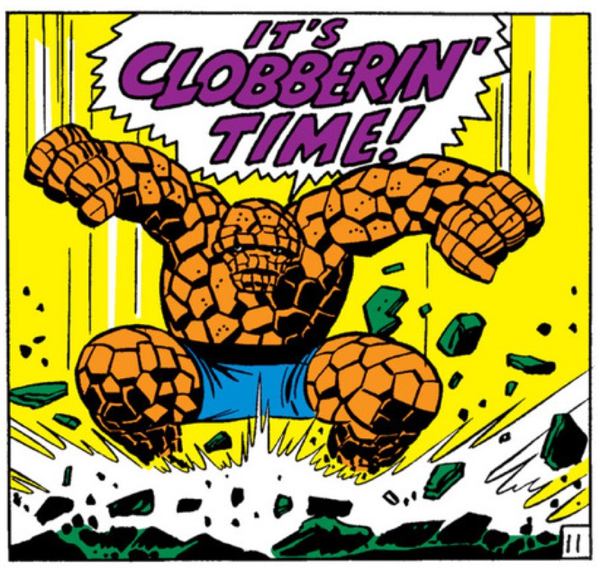 I’m a fan of the hard-as-nails-outside, heart-of-gold-inside archetype, and no character – EVER! – personifies that more concretely than Benjamin Jacob Grimm. The heart of the Fantastic Four (maybe even the Marvel Universe?!) the Thing is easily recognizable, instantly familiar, and wonderfully relatable, despite the orange, rocky hide.

It’s not hard to imagine Jack Kirby perched at his drawing board, scribbling out the Thing while perhaps vocalizing his own terse version of “It’s clobberin’ time!” The Thing is, without hesitation, Kirby’s (and Lee’s) greatest creation.

My opinion on the Thing comes from years of following Ben Grimm wherever I could, my recognition of the character is owed in no small portion to this, which I’m old enough to have caught on actual television back in the day: https://www.youtube.com/watch?v=64Jv8zbUsf4

Not only is Ben relatable, he also sets an example of what we should all be: strong and determined, but approachable and relatable, no matter what factors might have toughened our own hides. 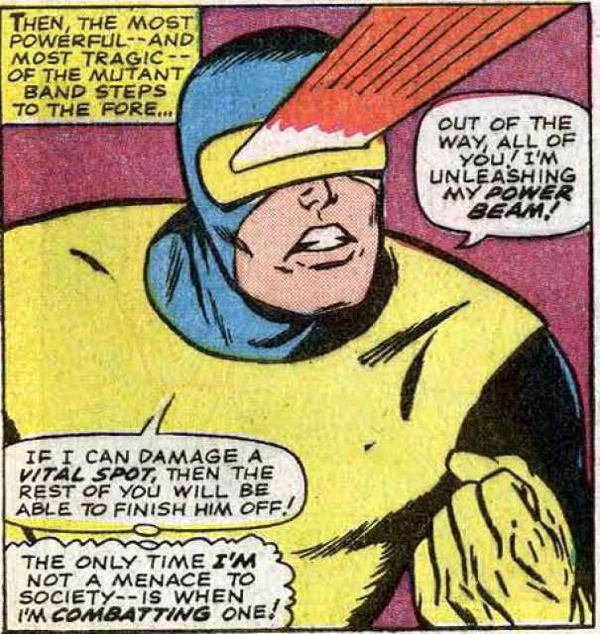 Although it’s difficult to pick just one, my love of the X-Men resulted in my decision to pick Scott Summers (Cyclops) as my favorite of Jack Kirby’s characters. Scott has been one of my favorite characters ever since I started watching X-Men: Evolution and I’ve loved reading about the teenaged version of his character in the recent Cyclops ongoing series and the second volume of All-New X-Men.

As I’ve been rereading some Bronze Age X-Men, I’ve gained even further appreciation for this character who has been a member of an incredibly famous superhero team for so many years. He’s stayed with the X-Men through so much of what they’ve been through and is one of the most recognizable characters in the cast. I’ve related to his awkwardness, nerdiness, and enthusiasm in these various versions. I think his enthusiasm for being a superhero is something that many fans can probably relate to.

As is the case for many characters created or co-created by Kirby, Scott has outlived his creator. He’s one of many examples of an aspect of Kirby’s legacy: characters who many fans have come to know and love via stories other than the originals but all of which would not exist without the work of the people who created the originals.

These days, even fans who might not have read the original stories will see Kirby’s name in the beginning of the X-books. Scott was one of the earliest X-Men, whose stories were part of the foundation of what has become a decades-long saga, and Kirby was part of the generation of creators who gave us these characters who’ve been in stories for all that time.

Of course, as a fan, I hope that these characters outlive me; I hope likewise that Kirby’s story and legacy is an inspiration to give due credit to creators who tell the stories we love. 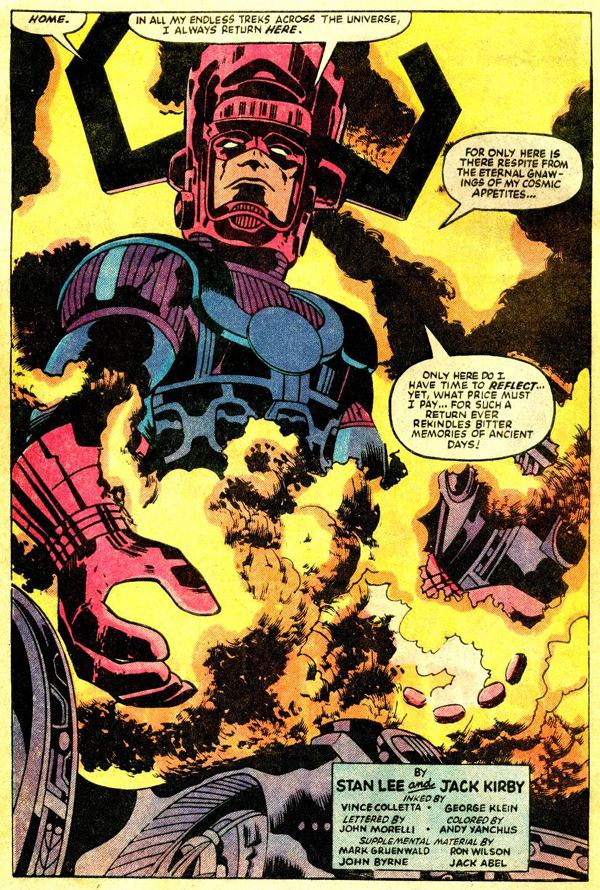 The world-eater himself, Galactus. Like Kirby, his influence is far-reaching, all-powerful, massively intimidating, and creative. Galactus will consume you, much like spending time looking at Jack Kirby’s illustrious and incredible body of work.

I’d like to also add, as a second favorite “character”, “Kirby crackle”. There are few things I love seeing on the page more than a large dose of Kirby crackle, sending energy in thick inky blobs into imaginations everywhere. 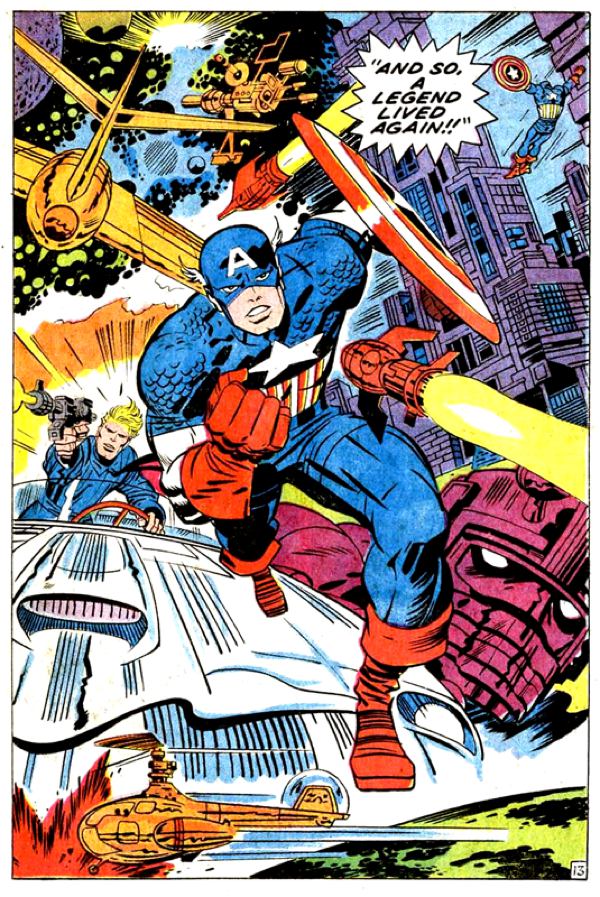 From the moment that Jack Kirby drew Captain America punching Hitler on the cover of Captain America Comics #1 in late 1941 the character of Steve Rogers was a political one.

America wasn’t at war with anybody, let alone Nazi Germany, as Pearl Harbor hadn’t even happened yet. Having Cap punch out the leader of another country set the tone for what Cap would be for the next 75+ years. Of the hundreds, if not thousands of characters that Kirby had a hand in creating, Captain America is the one that creators have used most as a political symbol. The character, in all of his different forms, has constantly represented the heart and soul of America at it’s best, or worst.

For that reason, Captain America will forever be one of the most important creations of Jack Kirby’s illustrious career. Whether it is Steve Rogers, Sam Wilson, Bucky Barnes, John Walker, Isiah Bradley, or any of the characters that have held the mantle, Captain America has been used to shine a light inward on to America.

So the next time someone mentions not wanting politics in comics, just point to any number of Captain America issues over the years. If that was all Kirby contributed to the comic book medium, that would still have been quite the legacy. Lucky for us, that wasn’t the case. 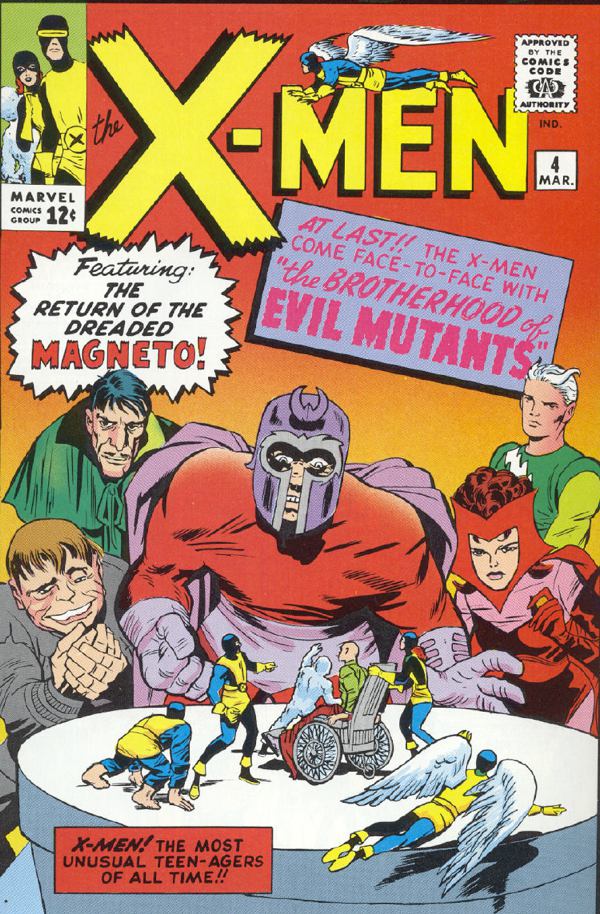 When Jack Kirby and Stan Lee created the X-Men, they developed a succinct and perfectly flexible metaphor for all kinds of oppression — Black civil rights, queer empowerment — but many believe strongly that they were born out of one very specific type: antisemitism. You don’t have to look much further than the Protocols of the Elders of Zion to see the kind of rhetoric mutants were pummeled with from the very beginning. And Magneto very precisely represents an attitude many Jews had in the years after World War II: that is, it’s time to start defending ourselves, by any means necessary.

Devised by his creators as a Holocaust survivor himself, Magneto is perhaps the most sympathetic villain ever devised — because what he wants is simply for his people to survive and thrive. Repeatedly looking to form his own mutant Israel over and over through the years, in Genosha, on Asteroid M, Magneto has wavered on how much he cares about homo sapiens, but there is never any doubt how committed he is to the survival of homo superior.

Heck. Maybe I need to get myself a “Magneto was right” t-shirt after all. 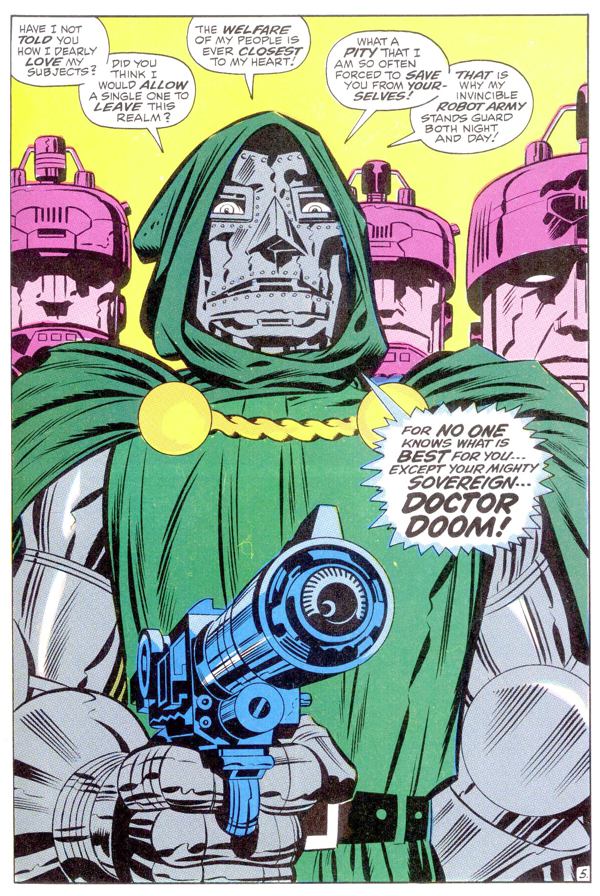 I will admit that my love of Victor Von Doom did not come from Kirby’s issues, but it is apparent even from the early days that there will be no greater character in comics than Doctor Doom. His level of arrogance is second to none and there is no character that can deliver over the top evil villain lines like 60s Doctor Doom. Kirby’s visuals give this character the same gravitas as another iconic villain (cough Darth Vader) and it is the kind of character design that artists can still work with 50 years later. That, my friends, is timeless.

While he started as a foil for Reed Richards and the Fantastic Four, Doom has gone on to save the universe as many times as he tried to destroy it, becoming the premiere villain/sometimes hero in the Marvel Universe. None of this could have happened if not for the framework built by Kirby & Lee, because we all know a character that lacks depth never makes it anywhere.

There are a dozen other characters that could have filled this slot but, like Kirby’s brilliance, Doom is unparalleled.