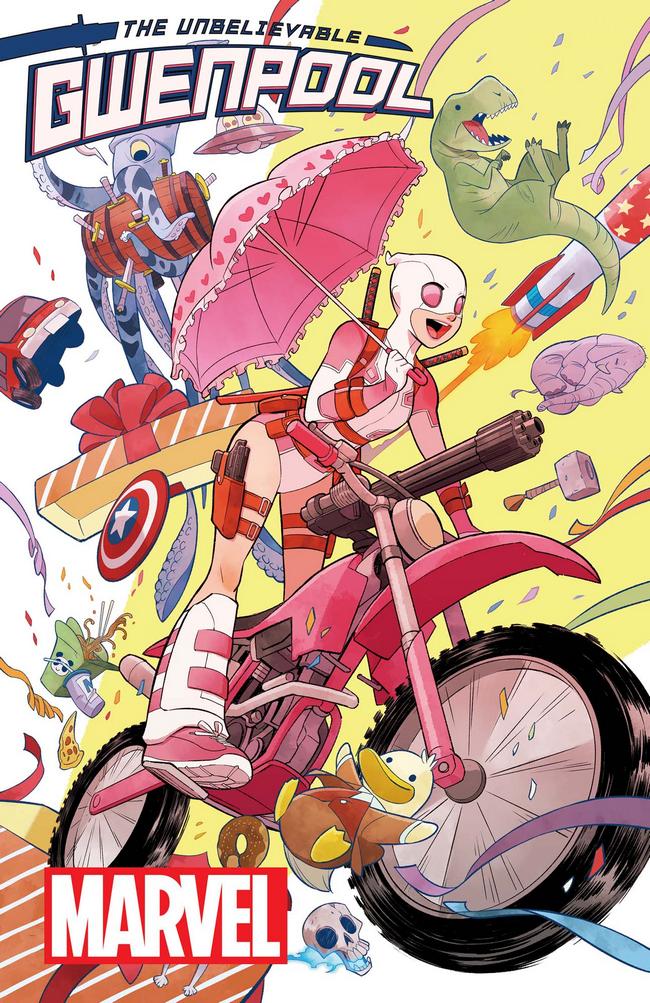 New York, NY—December 22nd, 2015 — 2015’s overnight sensation is taking center stage next year and slicing and dicing her way into her very own ongoing series! That’s right world, get ready for THE UNBELIEVABLE GWENPOOL #1 – coming at you in April from Gwenpool Holiday Special creators Christopher Hastings and Gurihiru! Strap in True Believers, you ain’t seen nothing yet!

Gwen Poole used to be a comic book reader just like you…until one day she woke up INSIDE the Marvel Universe! Now the characters she read about are all real! But they can’t be really real, right? This must all be fake, or a dream or something right? You know what that means – NO CONSEQUENCES! First order of business, get a costume and start fighting crime. Why? Because that’s what everyone who has a solo series does!

“The series is a lot about her believing she’s in a fictional world with no consequences,” says series writer Christopher Hastings, speaking with Entertainment Weekly. “She’s seen everyone come back to life at some point, and it sort of seems like she’s living in a video game. And then the book is going to be the universe fighting back at that. Like, ‘you can’t really get away with everything’ is kind of the struggle there.”

No power. No responsibility. No rules. No limits. The Marvel Universe has a new player, and she’ll shoot and slice her way through friend and foe alike. Could she truly be Marvel’s least role-modely and least responsible character to date? She can if she tries! Be there this April as this marvelous mercenary makes her explosive entrance in THE UNBELIEVABLE GWENPOOL #1!

THE UNBELIEVABLE GWENPOOL #1
Written by CHRISTOPHER HASTINGS
Art & Cover by GURIHIRU
On Sale in April!