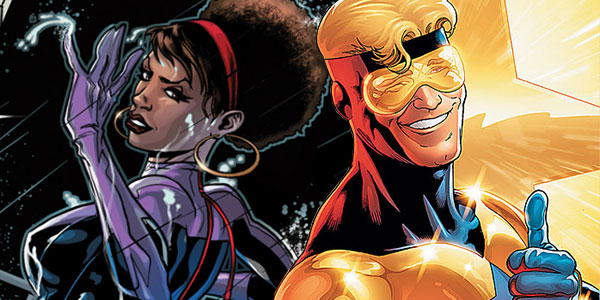 Welcome to HE SAID / SHE SAID, where our in-house arch-rivals Keith Callbeck and Jessica Boyd get a chance to scream at each other in text and you get the reap the benefits of the comic knowledge that comes pouring out. Today, as they search for new readers of this new column, they are delving into what makes a good book for new readers. In three rounds, they debate a comic topic and receive a score. But who wins? Why, you’re the final judge!

You may be wondering, “Why are Keith and Jessica so adversarial?” So, for our first round, let’s just ask the source(s):

Keith Callbeck: Jessica and I are like Professor X and Magneto, Ra’s al Ghul and Batman, Luthor and Superman. We are both completely sure of our own perspectives of the comics world, but those two points of view draw us into conflict routinely. It doesn’t help that she’s wrong about so much. The key areas of debate — Supurbia, Thunderbolts, and how awesome Booster Gold is (correct answers, bad, good, SO AWESOME!).

Jessica Boyd: While we write for the same website, I also regularly listen to the We Talk Comics Podcast. I noticed that the “news guy” from Comicosity always seemed to hate the comics I liked and liked the comics I hated. How in the world could we be writing for the same website?! Well, it turns out, as I listened to older podcasts that I missed, I found out that he did not care for (because to Keith, that’s equivalent to hate) one of my favorite comics: Supurbia. From then on, I knew that Keith Callbeck was the sorrow to my comics joy and I must destroy him! On top of everything else, he likes Thunderbolts, people! Don’t get me wrong. Booster Gold is humorous and fun, but come on! We both know that Batgirl rocks the DCnU!

KC: I will be sticking with Batgirl for as long as the James Jr. story plays out. I’m fascinated by that character after Scott Snyder’s tale, Batman: The Black Mirror. 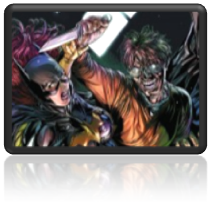 JB: Batgirl is essentially the rogues gallery of broken psyche and traumatic experiences. Batgirl is who everyone wants to be after those things occur. Her rogues gallery is what most people would probably become. Besides, Thunderbolts has Punisher playing nice, who can take a book like that seriously?

KC: Punisher playing nice? In issue 4, he literally strapped a landmine to his chest and hugged someone!

JB: Regardless, there are other areas in which we disagree. For example: What is the best type of book or the best book for a new comic book reader?

KC: I would go with anything that connects outside of comics. The only comic I’ve ever gotten my wife to read is Before Watchmen: Rorschach. The movie piqued the interest, the art sealed the deal.

JB: I’m probably the worst person to consult about this. I cannot even convince my own husband to read comics. However, it wasn’t long ago (2 years now perhaps) that I was only reading trades and not monthly. I feel like I know what works best for new readers, and that is a great story. Artwork can be negligible as long as you give them clear background on where the story left off. Marvel has been doing a great job with this, with their one page summaries at the beginning of every issue, while DC’s New 52 has already started to lose its storyline with consistent readers, let alone people just now hopping on.

KC: It’s flip sides of the same troubled coin though. New 52 is, to some, too bogged in continuity and interconnectedness already. Meanwhile, Marvel is so divergent that it makes no sense. Why they are trapping themselves down in an ancient continuity crossover event 4 months into their relaunch baffles me. 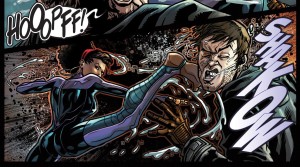 JB: At least there are summaries at the beginning of every issue where you can get a sense of: OK, this is where things stand. Even if you have no frame of reference coming in you can for the most part understand what is happening. Meanwhile, DC has issues with major gods or characters showing up, but if you haven’t been reading you are clueless as to what is happening. Story is everything.

Fearless Defenders #1 had a fun story with humorous moments. Despite some questionable art poses, the book works. You do not have to know anything about Valkyrie or Misty Knight to hop aboard this new title. Exactly what characters with history need. Art should be enjoyable, but not a necessity.

KC: Marvel and DC have both gotten flack for majorly reinventing characters. In the case of DC, it’s obvious with the relaunch. But characters like Starlord and Misty Knight are getting more sudden tweaks. One of my issues with Fearless Defenders was that it was so new reader friendly that it wasn’t old reader friendly. Where DC focused their efforts on re-engaging lapsed readers, Marvel doesn’t seem to have any idea who they want to connect with.

JB: While some of that old history might be lost, let’s stick with the topic, which is “new readers” and that reinvention is bringing in new readers, including female readers. Besides, it’s not as if the writers of many of these books are not familiar with these characters. Fearless Defenders writer, Cullen Bunn, has worked with these characters before. He has a history with them that he has established with a voice. The art styles are different, and perhaps more stylized. Isn’t this appealing to a new kind of reader?

KC: To me, a new reader friendly book should 1) tell me who the characters are 2) tell me their current status quo if they are an existing character 3) introduce at least the early central conflict and 4) give me something at the end to get me back for issue two. 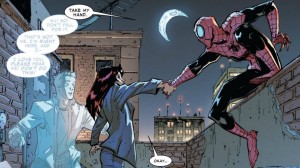 JB: So you agree that story is key?

KC: Character gets you the first try, story is what gets you to the second issue. I’ve never pitched to someone that they should read a book because of a character (aside from Booster). I pitch the story. Doc Ock is in Spider-man’s body, the Joker is after Batman’s extended family, etc. What do you need from a new book, not having the continuity stored in an encyclopaedic brain like mine?

JB: A new book needs to have a frame of reference, such as a summary or beginning point. If it is a book that has been advertised as a jumping on point, do not include inside jokes or events which will lose those without the prior knowledge. If you’re going to have a son and father about to battle, let the audience know earlier that they are family and this is something that has been building. Even for current readers, if it has been five or more issues since those characters have been seen, even avid readers could be lost.

KC: I think the best new reader device I’ve seen in years was Animal Man #1. It had that one page interview with Buddy that did exactly what I said previously. As an old reader, I knew where he stood, and new readers had plenty to set them up. I was disappointed they didn’t do that for all of the New 52. I resent when a book is too much introduction though. I call it “more of a #0.” There is a level of playing to the new reader that is just taking $3 from an existing reader. 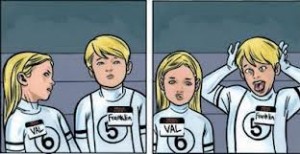 JB: FF #1 of MarvelNOW! did the same thing with a non-linear dispersal of interviews with students of the Future Foundation. While I found it adorable, many found it off-putting and thought not enough happened in the book. One man’s introduction is another reader’s excuse for quitting on a book before it has a chance to become hilarious (FF #4.) There has to be a balance and zero issues can provide that balance with a lack of background knowledge exists.

What is the best type of book for a new reader?
Who do YOU think won this battle?
Let us know in the comment section below.