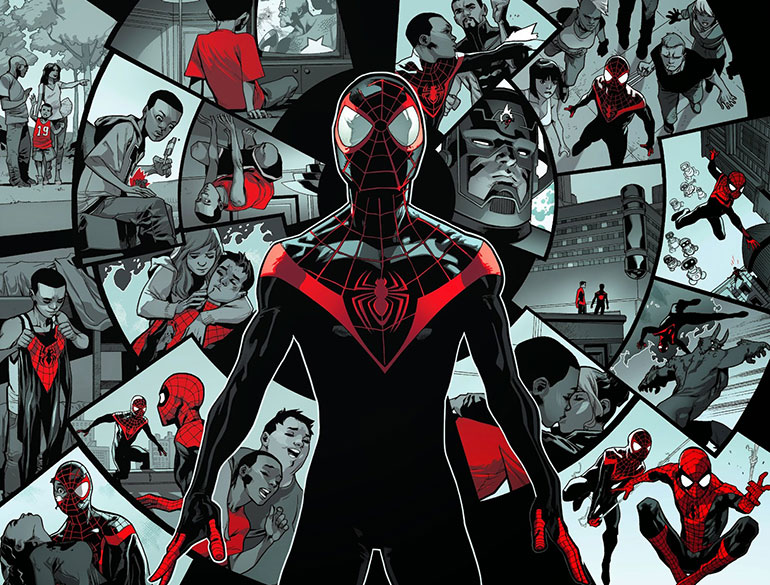 It’s been a while.

“Representation and Health 101” was my former exploration of themes related to health and well-being in comics. Now, updated to Health and Inclusivity, I want to take a similar journey through the page and panel, but maybe do a deeper dive into the connections between the comics medium and our everyday health and living — as well as how they correspond to social and cultural dynamics.

As such, I figured a familiar character — one who’s beginning to get more of his due through the big screen — would be a great person to start with. So, let’s talk about Miles, Spider-Man: Into the Spider-Verse, and the emotional and cultural resonance between him and boys like him.

Sometimes, it’s not just who we read on the page, but also the adaptions we get from them that can be powerful. Miles Morales has become an icon in his own right, and he deserves every bit of that.

Seeing him in the comics was one thing. Then, to see another imagining of him in Into the Spider-Verse drastically altered my feelings about Miles, where he came from, who gets to create him, and what that can mean for the rest of us.

Miles is a young Afro-Latino boy, the child of Rio Morales, a Puerto Rican nurse, and Jefferson Davis, a Black American police officer. Hailing from Brooklyn, Miles lives the life of an “ordinary” teenager until he encounters a similar situation that a prior Spider-Man did: the bite of a radioactive spider. Once he gains his powers, he has to balance his life and super-heroism, facing many challenges we have become familiar with throughout the history of comics. This is only the beginning, as the web around Miles weaves different stories for different reasons. 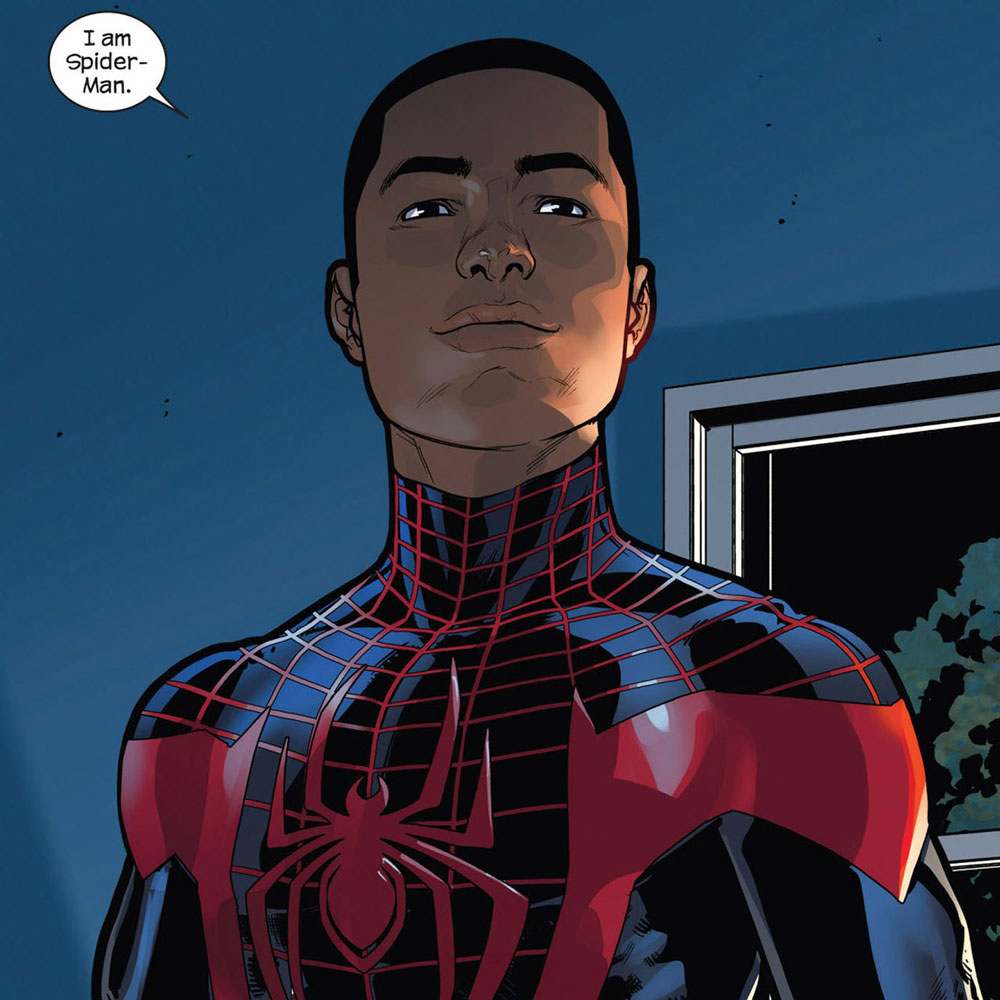 Brian Michael Bendis and Sara Pichelli creating Miles was an excellent move because it changed our relationship with the role of Spider-Man in a manner which hadn’t really been done before. Though we have experienced eras such as “The Clone Saga,” where multiple people held some kind of mantle as a webslinger, putting Miles into this position forced many readers to confront their idea of what being Spider-Man means and who can fill the role. This change, of course, was met with a variety of responses.

Yet, if we learned anything from Into the Spider-Verse, anyone can wear the mask. But we also need to dive deeper into what that means.

Bendis’ portrayal of Miles gave an excellent look at how teenagers emotionally respond to many situations, including trauma, grief, and loss, but there was still something missing. Namely, Bendis wasn’t great at addressing race for Miles. While Miles’ skin is brown, there have been very few memorable moments where his story truly got at all of his humanity.

A major contributing factor to this is that few, if any, of the writers involved in crafting Miles’ story have matched Miles’ identities (beyond male), let alone someone who meets the nuances of an Afro-Latinx identity. While a disparity between creators and the characters they write doesn’t always lead to critical gaps, it can still much more easily lead to issues in a character’s portrayal.

So, this is exactly why there’s something special about Into the Spider-Verse. 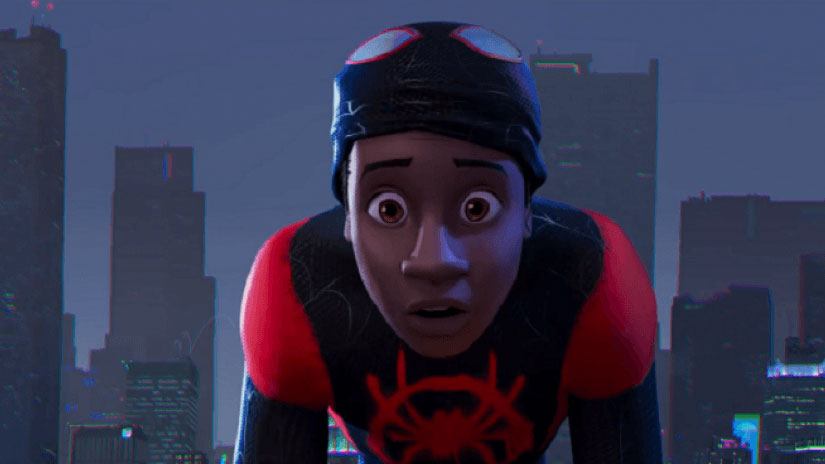 Miles’ film portrayal is truly something special. It’s important to note that comics-adjacent media, which have multiple layers of characterization — from voices to actors to writers and directors — have new and different tools to work with. As such, Shameik Moore was an excellent Miles, and we get to hear and feel different aspects of who Miles is in a way we never got to before, definitely changing my own perception of the character.

Beyond Miles and Shameik, there’s Brian Tyree Henry as Jefferson and Luna Lauren Velez as Rio, then Mahershala Ali as Aaron Davis, aka the Prowler — all excellent actors who continue to diversify the film world of Into the Spider-Verse. These are the starting elements to providing a new world for Miles that I don’t think we’ve ever gotten with comics, one that manifests the hero with the cultural world he’d likely be enmeshed with.

These portrayals, these cultural facets of the Miles film were the nameless thing that was missing from the comics. I couldn’t put my finger on it initially, but when I saw the movie, I fully understood what was happening to Miles through the comics. The Miles we read isn’t like the Miles in the film, nor is he like many young black and brown people. Because of that writing, there is an integral piece of his narrative that is missing. 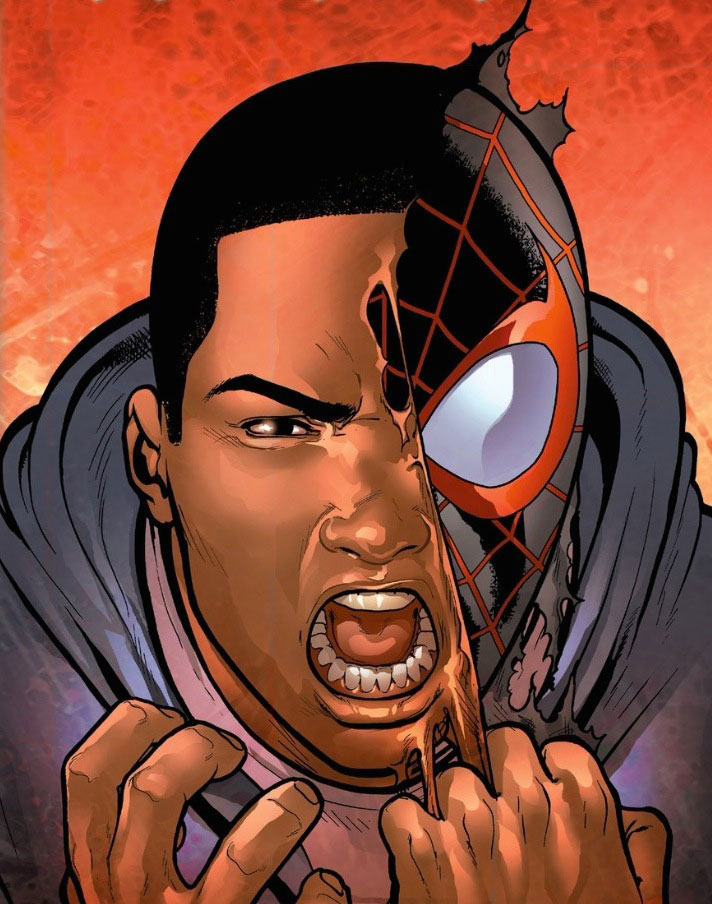 A couple of years ago I wrote about Miles and why he can be helpful to reference when it comes to representation. Looking back at that piece, it still mirrors how I feel. Yet, there’s something I feel can take that conversation further, and the movie is a great step in that direction.

While cultural narratives give way to the classic super-hero in the film, there are tiny glimpses that are markedly different from Miles in the comics.

For one, he speaks Spanish, and it’s treated as an integral part of his daily life. Hearing him switch between languages was a tiny, but monumentally important, part of his story, similar to his ability to connect with a variety of people his in neighborhood.

We also get to hear what Miles listens to. Many teenagers his age are indulging in the music from the film, which is essentially a meta-playlist, and with the ubiquity of hip-hop, many teenagers of all cultures will be listening. Yet, having a positive connection with hip-hop as a means of creativity and bonding forms a critical part of Miles’ story. He and his uncle Aaron listen to Biggie together, he uses “Sunflower” to calm himself and gain control of his powers, and we regularly see him bobbing his head while music plays through his headphones. To craft this experience as universal with no acknowledgment of what it may mean based on different cultures is to miss a part of the picture that has, unfortunately, been left out since 2011. 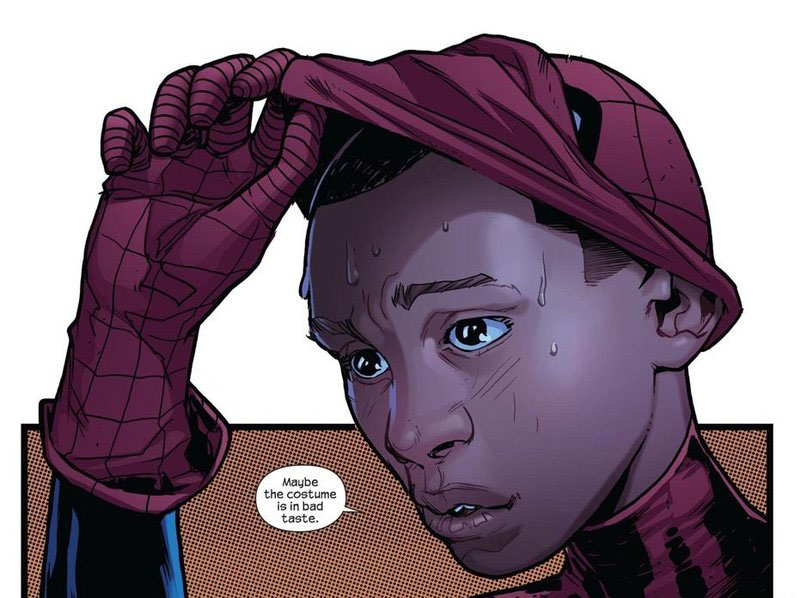 So, where does this leave us?

Well, I think we’ve begun to see a Miles who feels real. That’s not to say he didn’t before, but we have a new image of him, one that maybe fits even better with some of the people who will read about him. In particular, I wonder what Miles could represent for young Black, Latino, and Afro-Latino people.

We live in various cultures that immediately begin a process of inhibiting boys from accessing their emotions in a healthy manner. I can speak the most intimately to this process in young Black men, though I recognize that there are many forms of overlap within a culture of masculinity in general and within other cultural communities.

This non-emotional socialization is one of the cogs in the machine of patriarchy, forming part of the basis for cis men’s relationship with femmes and women, from the expectation of emotional labor to assault and abuse. Threatening masculinity, power, authority, or ability can mean danger for people who aren’t cis men, a particularly precarious situation considering that the people on the receiving end also become unduly held accountable.

Thus, it is our responsibility to check ourselves, respect boundaries, and learn how we are active or complicit in recreating these systems. Healthy expression and portrayal of emotion can be one of the keys out of the trap of toxic masculinity and patriarchy, and Miles gives some good examples as to how. 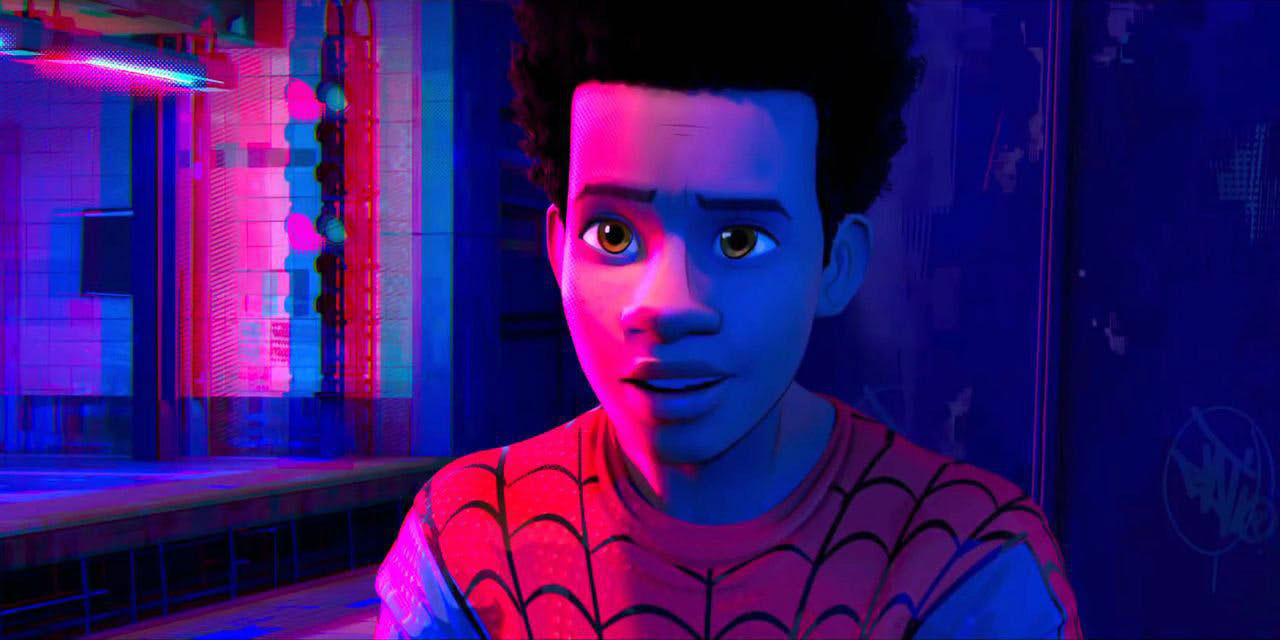 In Into the Spider-Verse, we see a young Miles process his feelings in real and in short time. In order to solve the dilemma of his story, he can’t falter, and we see what happens when he does even for a moment. To have to so quickly sort through feelings is no small task, so it’s vital that we have models to help us do so. Yet, for many Black boys, there may not be this model for many reasons.

Miles provides a roadmap to get us started on that process, considering that even if his story is resolved in the film, it doesn’t mean the emotional unpacking is done. The acuity of intense emotions throws our brains for a loop at any age, but especially as our brains — in particular the parts related to impulses and decisions — are still in a process of development. Having a concrete example of how to sort through these experiences can be very helpful, whether that means people get specific techniques or are able to understand their own feelings through another’s.

By building in cultural nuances besides skin color, and by having a character like Miles through which boys can see or filter their experience, Into the Spider-Verse achieves something that the comics have only done on a general level. There’s something to being able to write a moving narrative, but it’s another to have that done through intimate connection to a culture. All those tiny things that make up our lives, from the food we eat at Thanksgiving to our music and language, actually turn into major pieces of who we are and how that person comes to be. 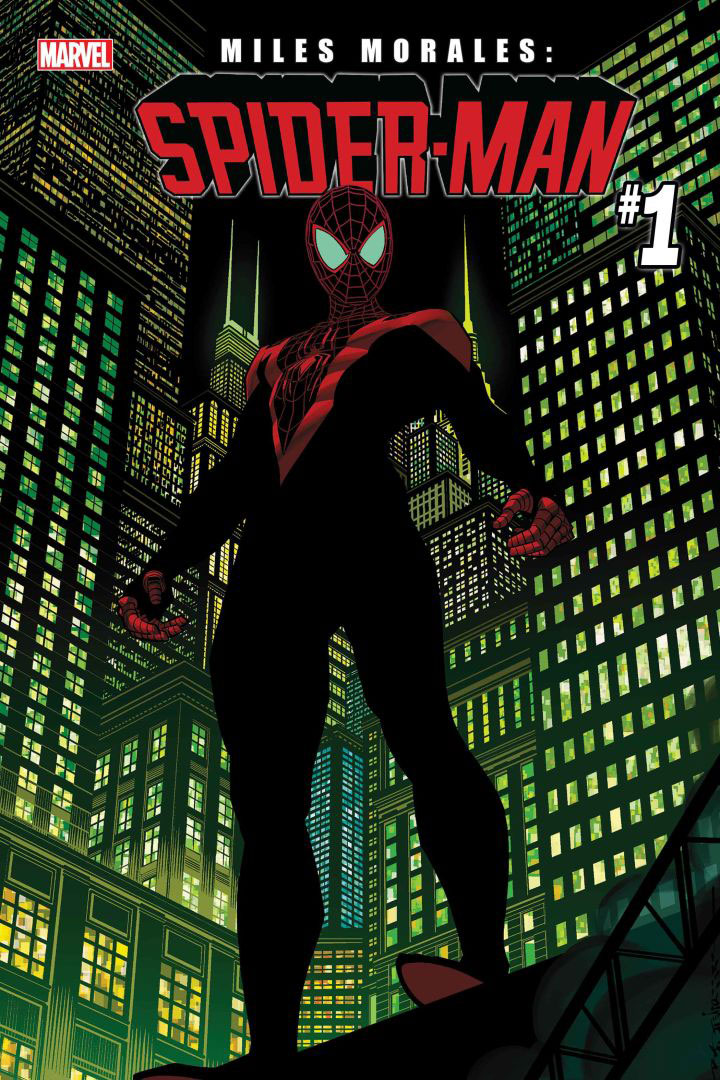 I think Miles gives that chance to groups of people who need it, not just for their benefit, but for those around them. Showing young boys of color how to sort through feelings in a world that denies them that, while also molding them in patriarchal fashion, can maybe be the tiny wrench thrown into the machine. We can never underestimate the power of being seen and being free enough to express your feelings and how, even if a small action, it can significantly alter someone’s course.

Giving people tools to properly process their emotions creates new ways for them to interact with their environment, and for black and brown boys it can mean challenging more than one oppressive paradigm we’d otherwise be more active agents of.

Though anyone can wear the mask, he shows us the value behind the “anyone,” and that it doesn’t mean Spider-Man as a colorblind hero, but that we can all get the chance to bring who we are into the role of the web-slinger.

Miles also is a potential way for boys of color to get a momentary reprieve in expressing the pain they feel, whether that is through the human experience of emotions or specific feelings corresponding to race and oppression on different fronts. Into the Spider-Verse is more than just an artistic spectacle of superheroism. It is closer, even if not quite there, to the truth-telling that we need from the world and from stories where Miles is the center, and in that truth maybe there is a modicum of freedom in a society that doesn’t offer it to everyone.