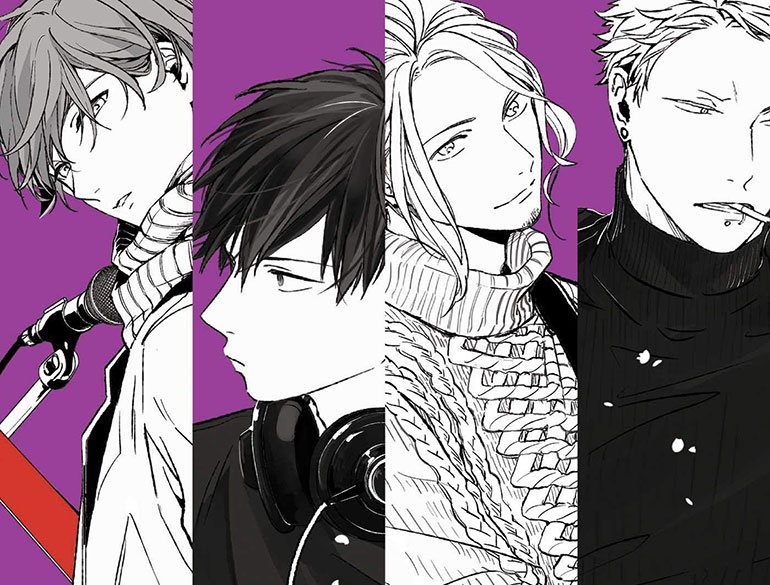 Music can be an equalizer. It can reveal things hidden within us or help us dive into our feelings. We can express joy, despair, happiness, anger, and many other emotions.

So, what if music was the way to see yourself? To see others? To forge pivotal connections?

In Given, we get to see not only the power of music in connecting us, but also what it means to truly find who we are and how that enables us to bond with others. These are the exact reasons I’ve been waiting to write a Health and Inclusivity column about one of my new favorite manga. 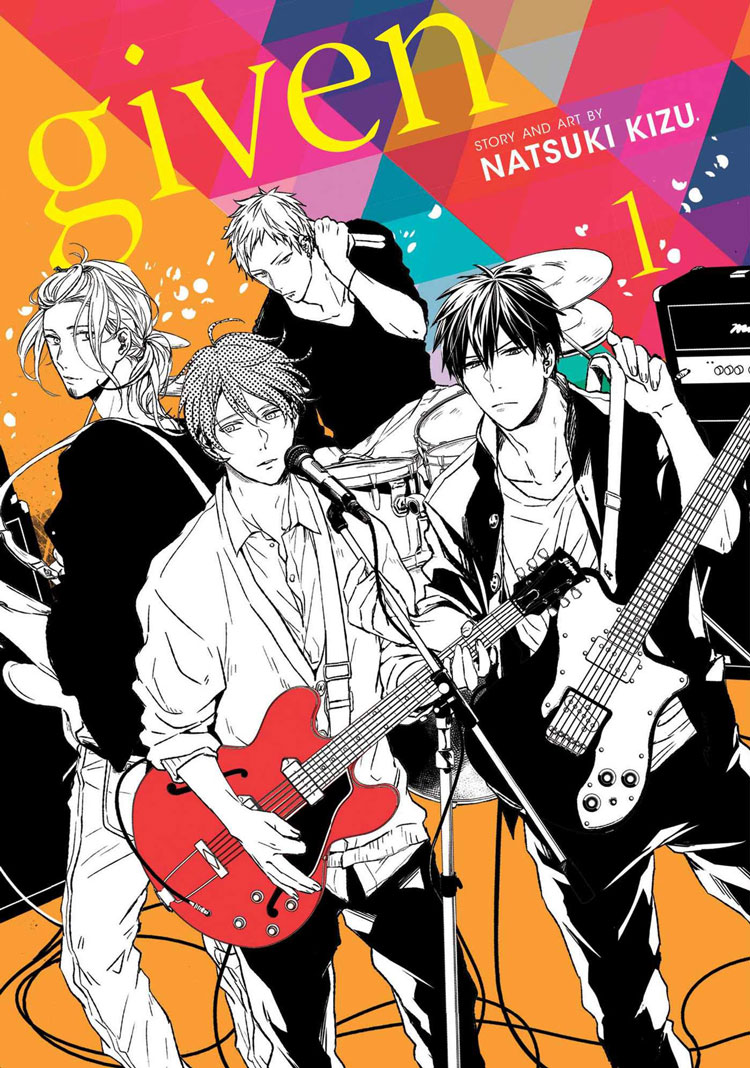 Natsuki Kizu’s Given introduces us to Uenoyama, a high schooler with a fondness for sports and music but who hasn’t found inspiration to do much of anything. Of course, this changes when he finds the quiet Mafuyu, who has recently transferred to Uenoyama’s school, napping in his usual spot.

Though with initial consternation, the more Uenoyama spends time with Mafuyu, the more he can feel part of himself come alive. His bandmates, the college students Akihiko and Haruki, help him navigate the world of music and his budding connection to Mafuyu, even as they navigate their own lives. As the four band together to create music, they all undertake their own journeys of self-discovery.

Gay boys are going to draw me into a story anyway, but add music and you have a story of my dreams. I first encountered Given as one of last Spring’s new anime releases. After finishing the first season, I knew I wanted more, and I definitely knew I wanted to read the series. Though I had to wait a few months until late February, I finally got my hands on the manga and it was just as delightful as its consequent anime. The story’s pacing is one of its charms and one of the ways I feel this manga is beneficial.

An immediate theme that stands out to me in Given is the idea of self-discovery at one’s own pace. While all of the characters are sorting things out for themselves, Uenoyama’s journey takes the forefront. He’s known as an athlete and a musician, but those things do not really bring him joy.

As he meets Mafuyu, he can feel new emotions stirring within himself, immediately marking his journey into a new unknown. Though he can be surly and temperamental, Uenoyama not only begins to work to uncover his feelings for Mafuyu, but also to just understand his feelings in general. These things are monumental themes for the manga and they certainly had a profound impact on me. 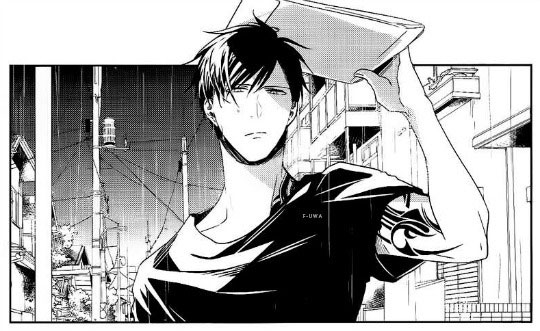 Sexual orientation is something that really doesn’t have a true pace. Similar to grief, forgiveness, and love, there is no timetable; any amount of certainly we look for is really just a false sense of security. So, this all means that whether we are born this way, we change, we see new parts of ourselves that we weren’t permitted to see or discover, our time is our time.

These lessons are apparent in Uenoyama. In the first volume, he does arrive at a critical understanding of his feelings for Mafuyu, though he also proceeds at a ‘slow’ pace. His insights are not quick, but they are natural, gradual for what he is experiencing. In similar fashion, so do many, if not all of us, experience sexual orientation.

Too often we encounter, and sometimes exacerbate, a world built on absolutes and essentialism. When it comes to uncovering sexual orientation, we really aren’t given time at all to explore. It’s always assumed that everyone is irrevocably heterosexual and that to be anything but is deviance.

Because of these limited views on sexual orientation, exploration is not something we truly have the luxury of. Even from a place of privilege, queer orientations are vilified worldwide, though some nations have made better strides than others at protecting queer folx. It ends up meaning queer folx often have a delayed, interrupted, halted, or non-existent trajectory for identity development. 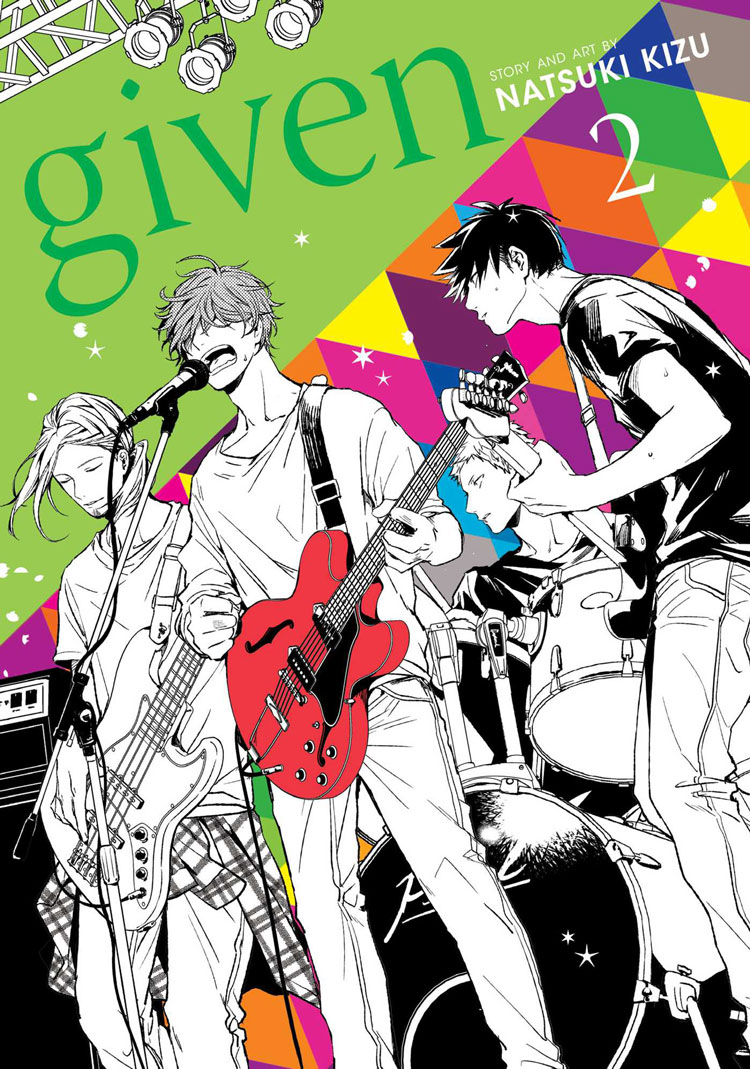 The sad reality of queer identity development is that queer folx can often buy into limited ideas of sexual orientation. The idea that we are all heterosexual or gay is not just a heterosexist myth from cishet folx; gays and lesbians say the same thing to the detriment of bisexual and pansexual folx, leading to the increasing levels of distress many bi and pan folx experience from other demographics in society.

The model was initially created using gay men to inform how a gay identity forms. Based on the early research, Cass conceptualized six stages of homosexual identity development:

Identity Confusion (awareness of differences from cishet peers regarding attraction);

Identity Pride (intense connection to and contact with gay community, heightened salience of identity); and

These stages mark the trek from living according to heterosexual expectations to having a gay identity that is woven into many parts of someone’s life. 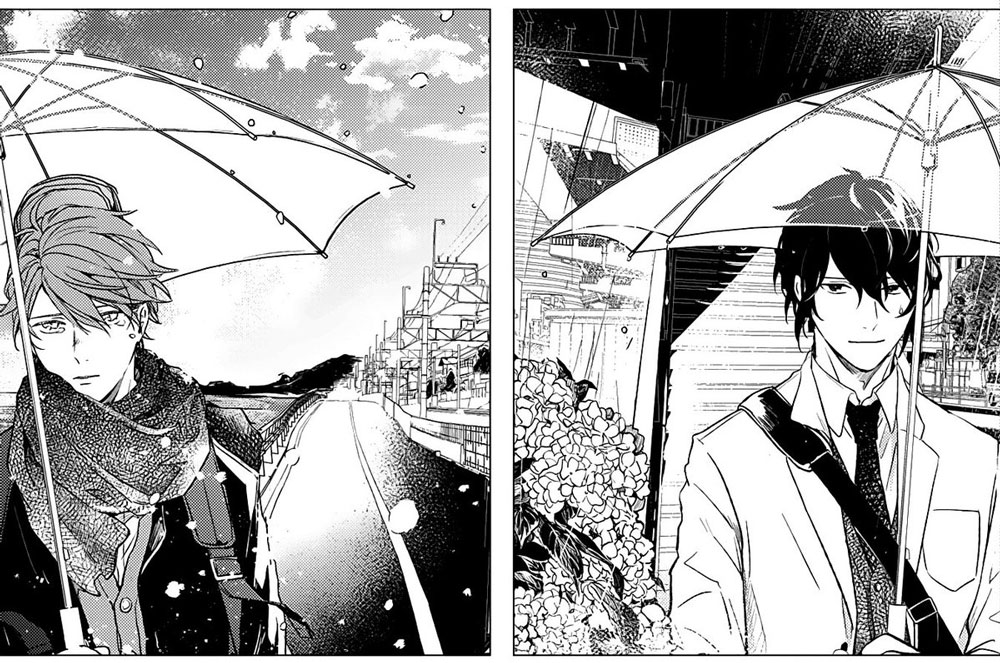 Yet, as with many stage theories, it’s important to note that this is not necessarily a linear process. Some events may spur someone to move to later stages of development, while others may send someone to an earlier stage. This non-linearity respects the actual process of how we become ourselves, knowing that it’s rarely a sequential, neat, tidy journey of self-discovery.

While I find the Cass model helpful, it is not without critique. Since the initial framework for the model was informed by the experiences of cis gay men, it left questions of whether the model applies to other groups, namely lesbians and queer people of color. Recognizing the role that whiteness and maleness have in marginalized communities, later researchers tried to see whether the model continues to hold up, with some indication that it does fit for diverse populations.

Yet, while the Cass model can be a beneficial conceptualization of the development of a queer identity, we have to consider some of its weaknesses. As such, when thinking about how we develop queer identities, it’s worth it to examine with curiosity rather than a distinct and immovable structure. Also, similar to issues with Cass’ conceptualization of sexual identity, it’s important to think about cultural perspectives in analyzing Given.

I am discussing this manga from a western, American, Black, cis, gay male perspective. This means that there’s likely cultural nuance I won’t be able to contact or understand regarding this manga, though I can certainly learn. 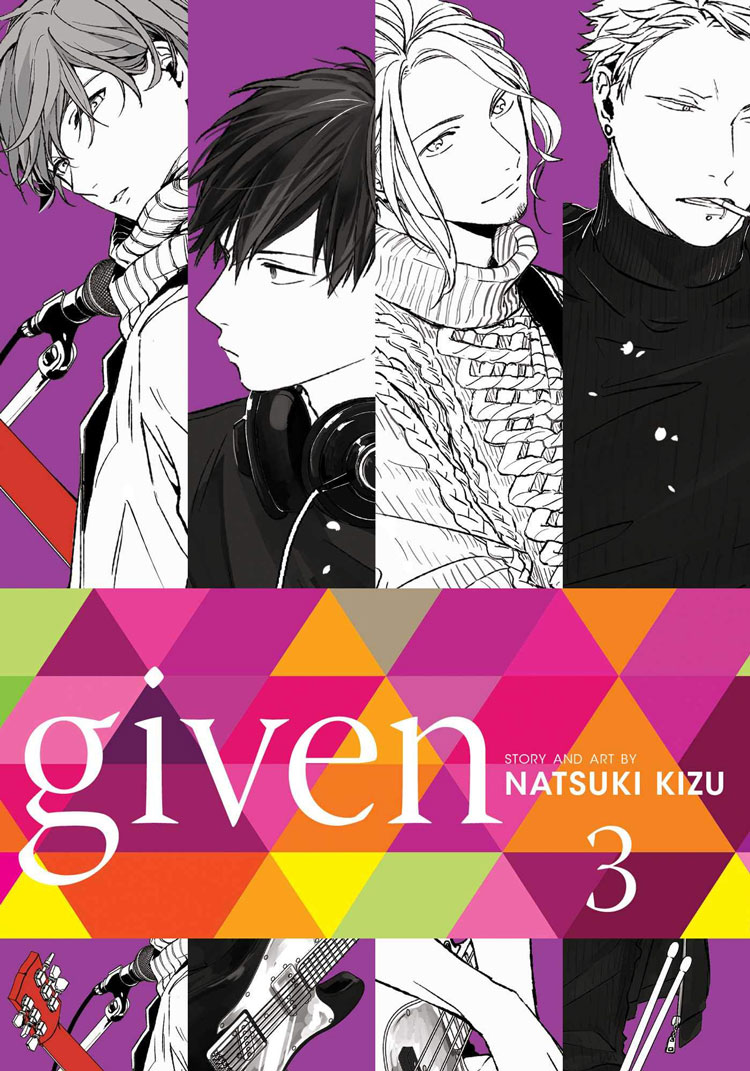 That also means that I can’t make direct correlations between identity and this piece of media without acknowledging the cultural distinctions between what we see in the manga from a Japanese context and how we may consume it from another cultural standpoint.

Thus, considering how diverse the LGBTQ community is, we have to have a critical cultural lens, lest we let queerness or transness devolve into an erroneous reflection of white supremacy like we have seen in the past (i.e. erasing or dismissing racial narratives in queerness or transness, white LGBTQ folx not working to dismantle iterations of racism, etc.). So, that being said, there’s a lot of ways I connect with Uenoyama and Mafuyu, and other ways that are likely invisible to me but that maybe can speak to the experiences of queer and trans folx in Japan.

Given was a solace for me as an anime and as a manga because it speaks to being able to become who you are on your own terms. Besides it being a cute story about gay boys, it also reflects how we arrive at the truths we claim for our identities and why we need the time and space to do so with autonomy. With the value I see in this manga, I also recognize that there’s a different cultural context around queerness for Japanese people, so while my lens for understanding the story can make sense, it’s also limited. 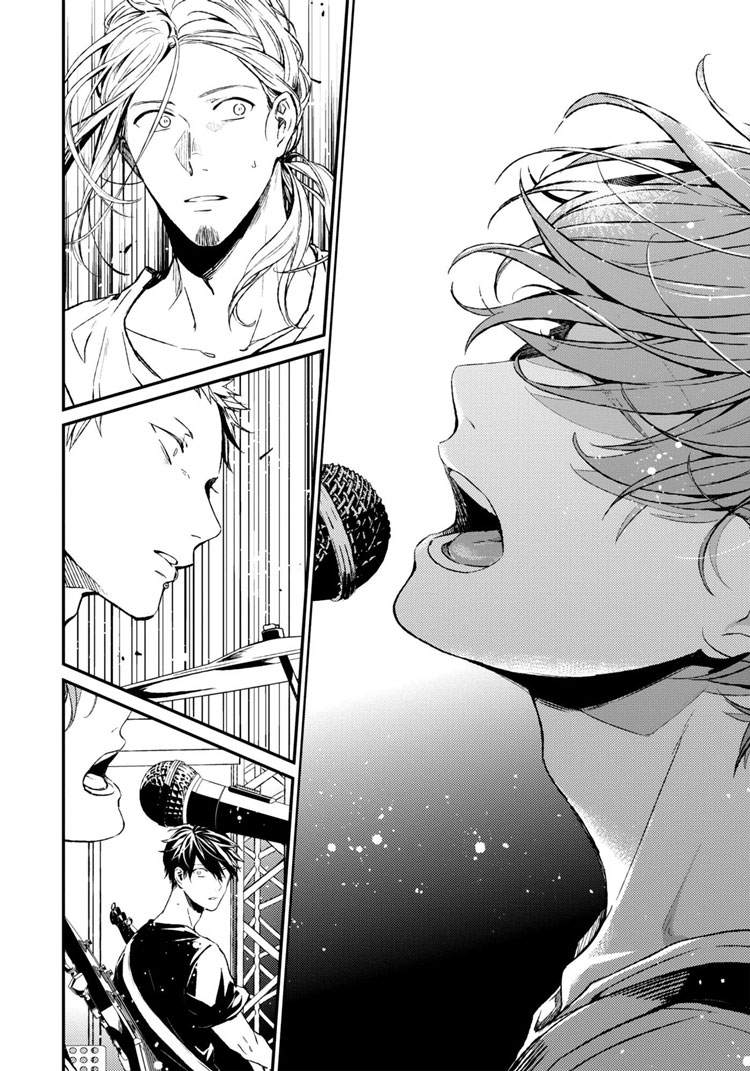 Understanding queerness and transness means understanding the infinite iterations of them that exist along many different lines, and that the way we encounter them influences how we claim them. Reflecting on Given leads me to reflect on queerness, my own journey, and the innumerable journeys that exist beyond me. Just as Uenoyama had a revelatory moment that changed how he saw himself, so do many of us, and we all deserve and need the room to uncover what these moments mean for us and our identities.