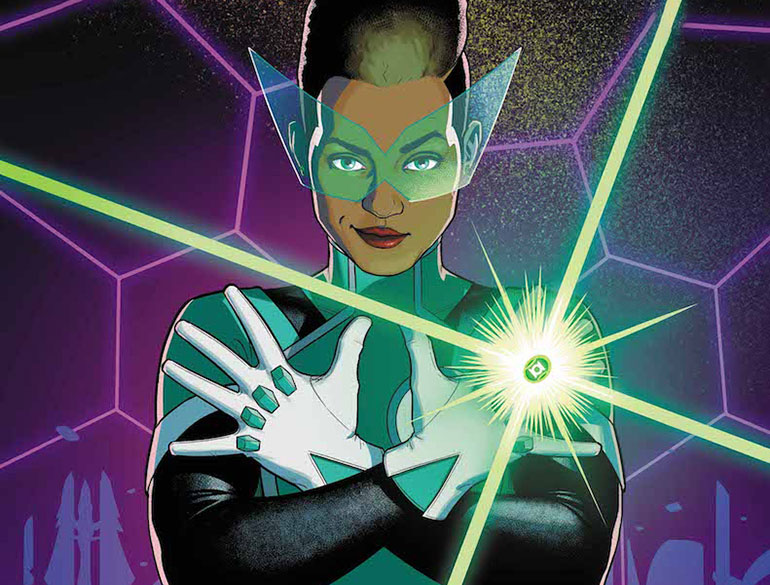 Sometimes, our journeys take us further than we ever expected. What we end up reaching has its own vestiges of our past as we uncover new experiences.

In similar fashion, Sojourner Mullein, or Jo, is a new Green Lantern sent to the far reaches of space in N.K. Jemisin, Jamal Campbell, and Deron Bennett’s Far Sector. As she is thrust into a mystery the likes of which the City Enduring hasn’t seen for over 500 years, she navigates the culture of its inhabitants while, to this point, encountering ghosts reminiscent of a racist history from Earth. So, without further ado, let’s dive into Far Sector and what I see emerging from the series in the lens of Health and Inclusivity. 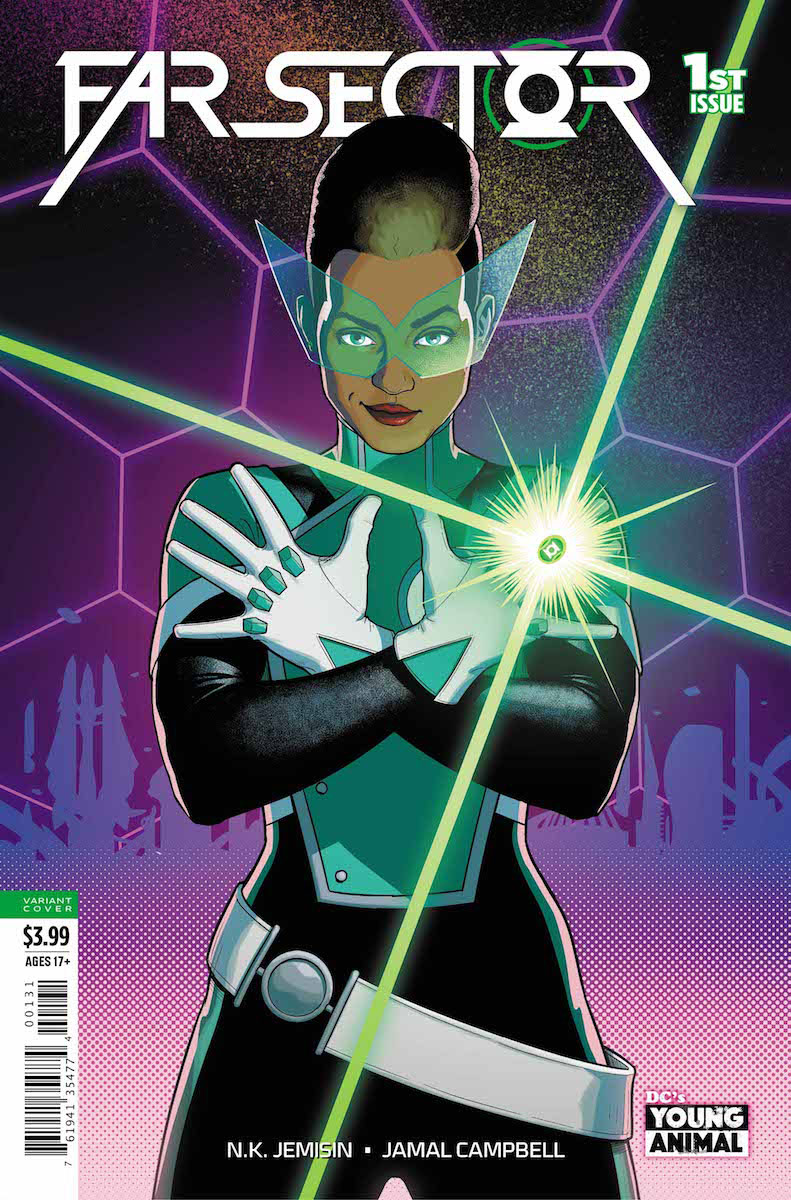 The opening scene of Far Sector’s inaugural issue is jarring, detailing the murder of one of the City Enduring’s inhabitants. Among the citizens of the City, who are collectively called the Trilogy, three species live together in seeming peace: the Nah, the @At, and the keh-Topli. After years of intermittent struggle, they came together to construct an accord which allows every citizen to live with relative ease. Until someone is murdered.

From this point, Jo has to figure out who is responsible for the homicide of the Nah male, Stevn of The Glacier, By the Wavering Dark. Through her current circumstances, we begin to see how the society of the City Enduring actually is woven together, how Jo fits in, and what the cost of peace actually is. 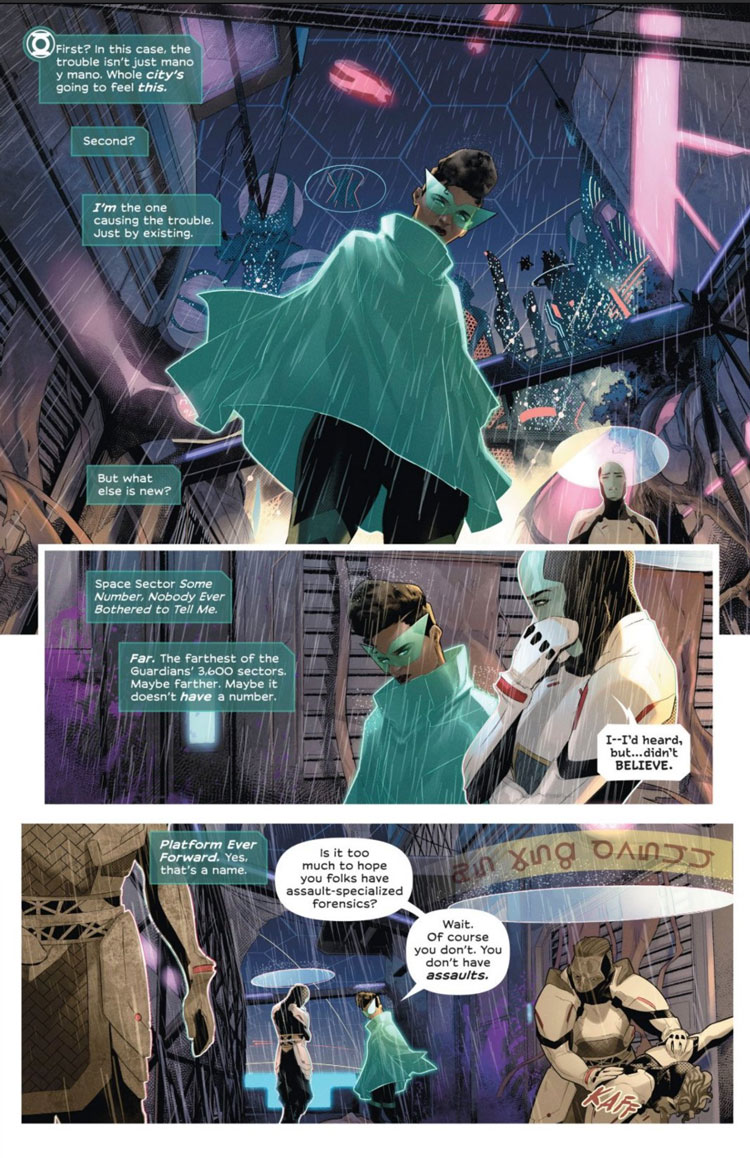 I had wanted to read this series since I had heard about it. Once I began to read, I was struck by a number of things, many of which I wanted to address in this column. From the external level of a Black character getting to have an adventure that does not revolve around Blackness, to the inner politics of the story, there is truly a lot to unpack (a statement I’m sure you’ve never read from me before). These elements and more help to reveal how this story connects to our real and lived experiences and why it is another piece of media worthy of reading, investigating, and reflecting upon.

To start, we are increasingly having conversations regarding representation, including it being a low bar. I spent a couple of years in the previous iteration of this column, Representation and Health 101, looking into such themes of who is on the page, who crafts it, and why that’s important.

So, to take things a step further, having Jo as a queer Black woman as a Green Lantern is monumental. Through N.K. Jemisin’s storytelling and Campbell and Bennett’s visuals, we get an intimate look into what life is like for a Green Lantern from a different community than we’ve seen in this interstellar force of protection and peace. Language, hair, and perspective dot Jo’s trek through the City Enduring, giving us a new look into how her own past informs her interaction with at least three new species of people. However, we can’t just stop at representation. 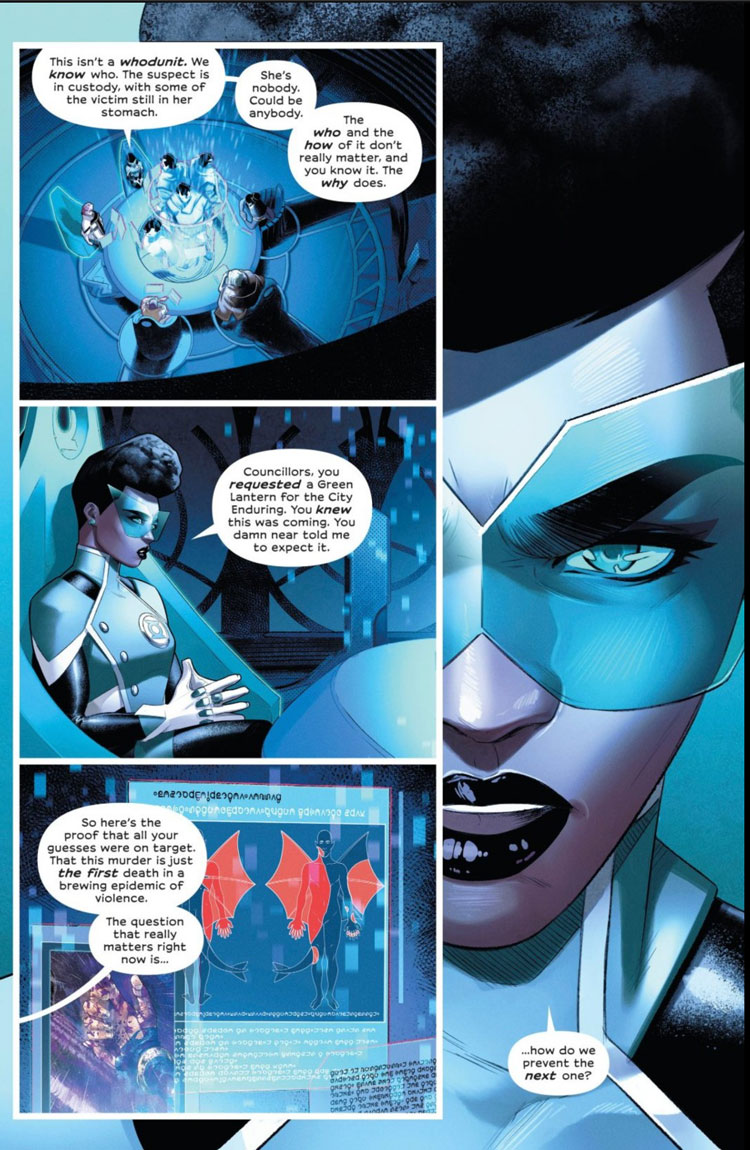 In addition to the aforementioned discussions regarding who gets to be seen and how, there is always something to be said for a story that engages Black characters, and by extension Black readers, beyond a blatant racial narrative. Make no mistake: it is still vital for us to tell stories regarding how we live and how we are treated, as many people who don’t exist on the axis of Blackness still do not recognize the unique and specific interactions we have among ourselves and others.

Yet, it is also important for us to be able to tell stories where we get to ‘be,’ and that is just what Jemisin, Campbell, and Bennett have done. This is not a story wholly divorced from the politics of Blackness, as we get images and flashes of Jo’s past and America’s racial history throughout the current three issues of this comic. Instead, it is one in which Jo is honored for all of who she is in terms of gender, race, and sexual orientation, woven into an intricate tale of cosmic adventure.

Through this connection between Blackness, science fiction, and an entertaining speculation regarding the existence of an entire culture light years beyond our own, we also get to see how Jemisin brings to the fore the importance of our history, both individual and broad, on everything we do. There is no way we can fully separate from our pasts; our brains are literally designed to operate on any prior knowledge and experience we have, for good and for bad.

As such, Far Sector includes references, ideas, and quotes from Black artists and thinkers like Zora Neale Hurston and Chinua Achebe, indicating their impact on the comic’s creators and Jo herself. These politics extend into the society of the City Enduring more than we may expect, landing at a particular point I wanted to address: the nature of ‘peace.’ 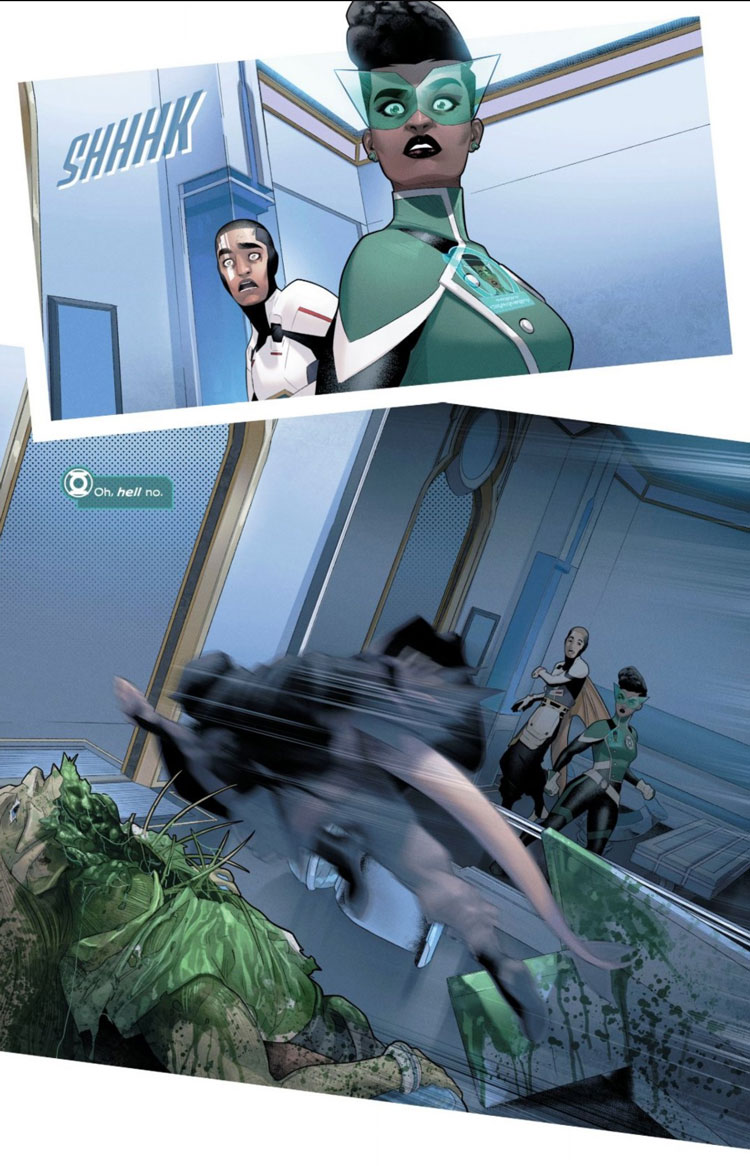 Within the first issue, we see that there are slurs for the Nah, who look a lot like Black folks Earthside. The exchange between Szyn and @Blaze-of-Glory is our first glimpse into how the Nah are treated and seen by the @At and the keh-Topli. We also find out that the relationships among the Trilogy did not have peaceful beginnings, as another interstellar empire sewed division among each of the three species, using similar tactics as we see here on Earth throughout our history until now.

This contention hinges upon turning one group against another, highlighting ‘crimes’ that they may or may not have committed, with very little context, but with a lot of hate and fury driving people’s emotions. The lesson we quickly learn is that peace always seems to come at a price, and the ‘easy’ peace, the one which Martin Luther King Jr. described in his Letter from a Birmingham Jail as ‘negative peace which is the absence of tension,’ is the selfsame one inherent among the Trilogy, the one that is easily eroded by stoking the flames of anger, derision, and marginalization.

The politics within the City Enduring are revelatory, providing a different perspective than the jarring comfort marred by the sudden homicide seen in the first pages of the first issue. We begin to find that what the Trilogy have worked toward is no true peace, no true justice at all. By using the Emotion Exploit, reducing the emotions of the population to nothing, the three demographics of the City Enduring found a way to make things work. Yet, as we have seen through history, this does not tend to work out very well when push comes to shove or, you know, when someone gets eaten for the first time in 500 years. 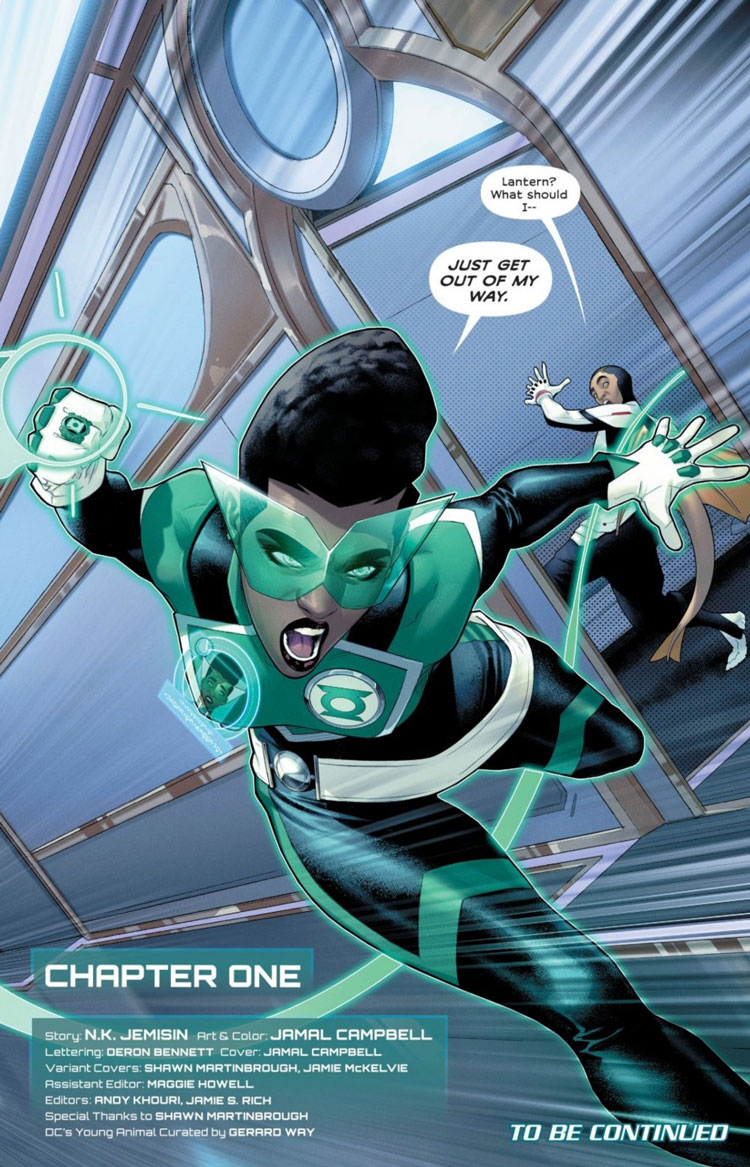 So, when I think about Far Sector and how I see it through the lens of ideas like Health and Inclusivity, I come to the conclusion that it holds up a mirror to how we function and how easily we can devolve into dysfunction. Jo being the center of the story provides a different avenue than we commonly see in the mainstream to understand the gravity of her circumstances. Black women have been writing for a long ass time, and it’s not that there aren’t prolific and talented Black women crafting stories in various media, but it’s that they have barriers placed in front of them through misogyny, racism, and the intersecting experience of misogynoir. All that to say, Jo, through Jemisin’s writing and Campbell and Bennett’s art, gives us an understanding of the City Enduring that men or white people are not always capable of expressing, at best.

Jo stands as a protagonist who has a wealth of culture and experience behind her, fueling her desire to quell the conflict on her temporary home. In a pivotal scene in the third issue, we come back to this idea that true peace, true justice, takes time and effort. It is not easily and quickly won, especially not when there is a culture of tension and bigotry, privilege and marginalization, that exist as the undercurrent of amenable appearances.

Ultimately, what I find we can learn, and what this story impresses upon me, is that to truly look after people, we have to work hard. It is more than cursory glances over applications for employment or education, more than keeping quiet for fear of provoking the ire of privilege, much more than finding a simple solution that does not meet everyone’s needs but, instead, seeks to placate them for fear of other issues arising.

What I have found in my own short life is that placating people does nothing, but because it is the path of least resistance, we often opt for these kinds of solutions because it creates an immediate quiet, rather than a longer lasting equity. 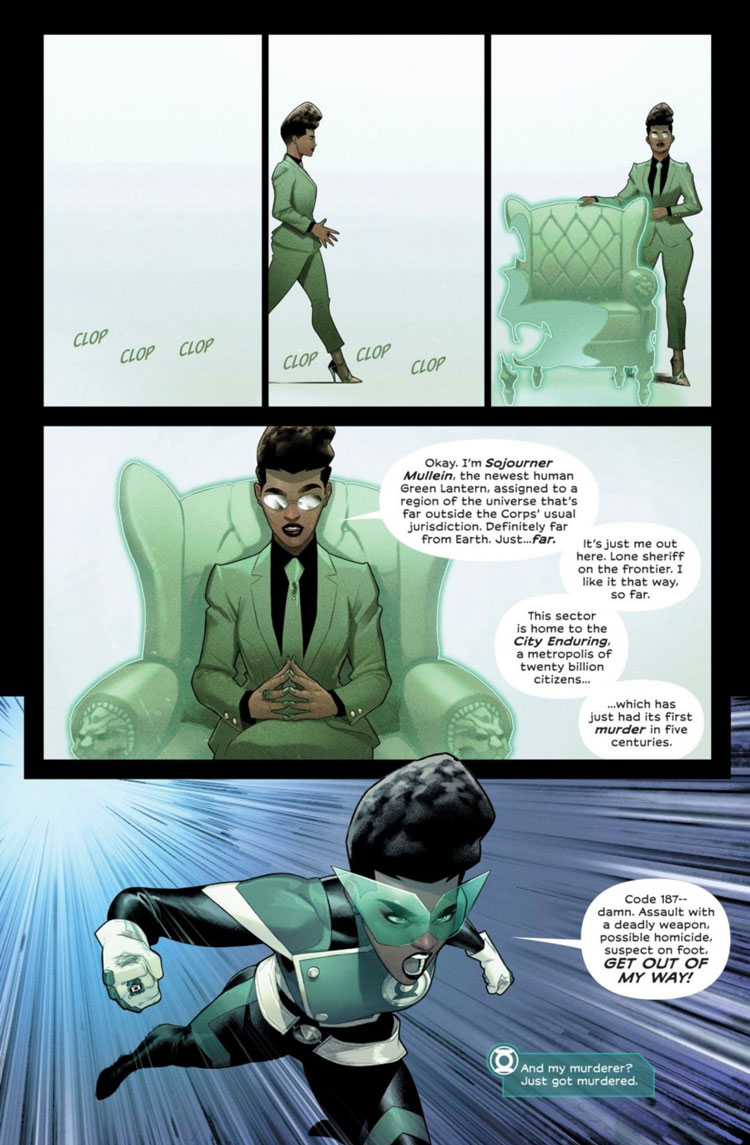 So, Far Sector offers an important lesson on the care required to create the society we say we want. This story shows us that to bring everyone to the table, we have to embark on the arduous process of decolonizing our minds, dismantling how these oppressive systems affect us and seep into some of the earliest schemas we ever encounter, for, otherwise, we are not actually creating efficient and enduring change. We are only putting a band-aid onto the suffering of all of our people, compounding this pain once our fears and apprehension and malice inevitably rise to the surface again.

I’ve loved Green Lantern for a long time (Kyle is my favorite) and I’ve always found the stories of the Corps a potential ground for innumerable stories of how we connect with each other and where we can go wrong. Though Far Sector is embroiled in increasing conflict within its story, we also get to see a way out, where we can go right.

Jemisin, Campbell, and Bennett have created beautiful and vibrant story that touches on a number of topics, many that exist beyond this writing and that I may not even see upon my first reading. Far Sector is valuable as an innovative Lantern story centering a queer Black woman, as one that reminds us how our past informs every new interaction we have, and that to create a world better than the one we have now, that more than adequately cares for everyone among us, we have to work hard and deal with our own shit.

Far Sector shows us that the ‘wrong’ kind of ‘peace’ can be easily destructed, that a better one involves a level of effort that will push us in many ways both imagined and unknown. And it is absolutely worth it.