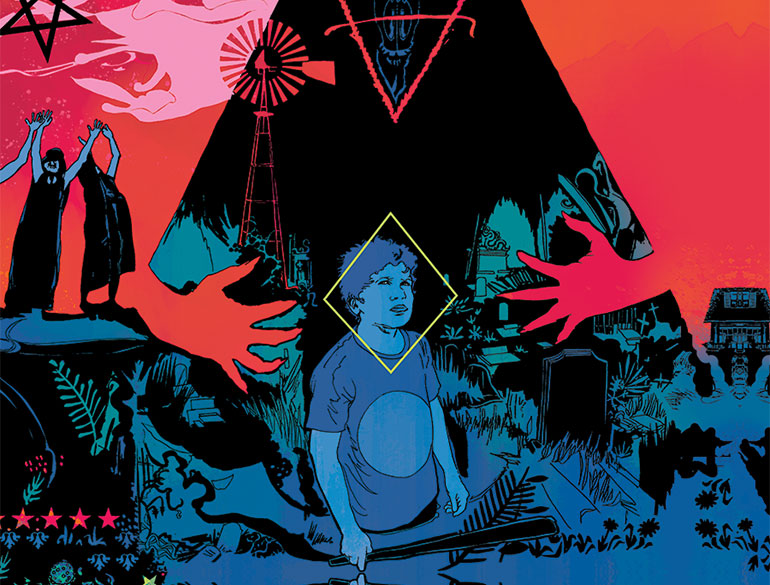 HERoes, Comicosity’s focus on the process and influences of women creators — from new-to-the-scene to senior in the industry — is please to talk to artist Alison Sampson this week. Sampson is launching a book from Image Comics this June with writer Steve Niles called Winnebago Graveyard, a mystery mini-series about a traveling family that get stuck in a small town — with a very big secret. 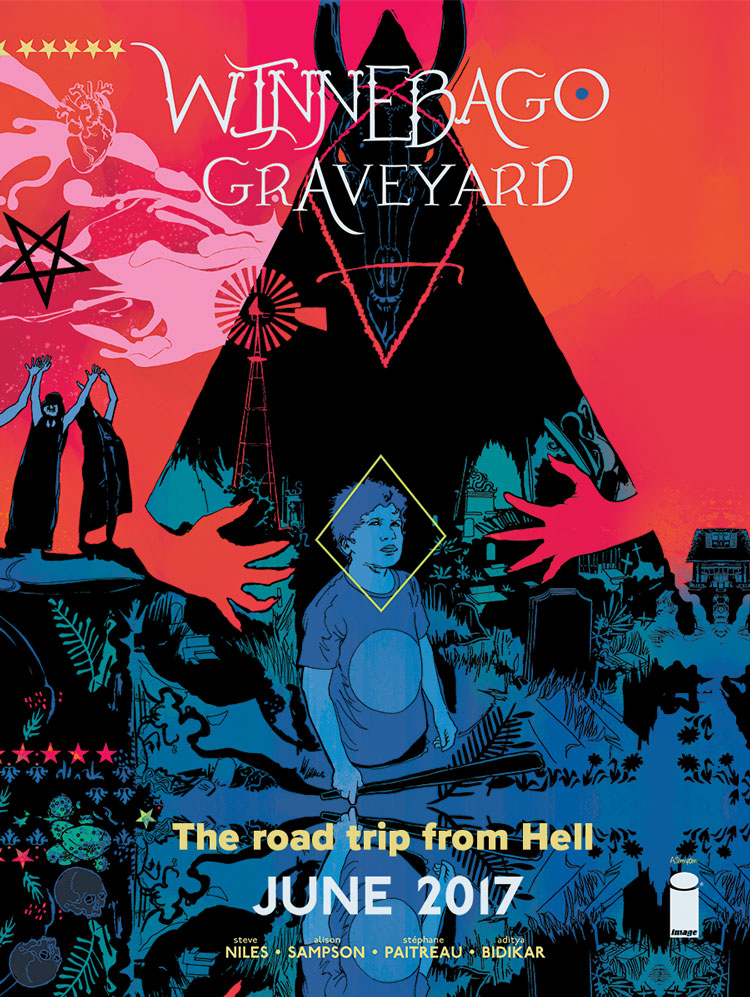 What is your favorite aspect of comics?

What is your favorite part of the actual creation process of comics?

Invention (and maybe risk in invention).

What issue or series has had the biggest influence on your work? Who is your favorite protagonist or antagonist?

It would have to be 2000AD, and Judge Dredd, as I read those as a small child. Maybe as I go forward and try and refine my work (and make it myself), I’m more influenced by work by creators like Nate Powell and Jorge Zaffino, whose originals I see every day above my desk. 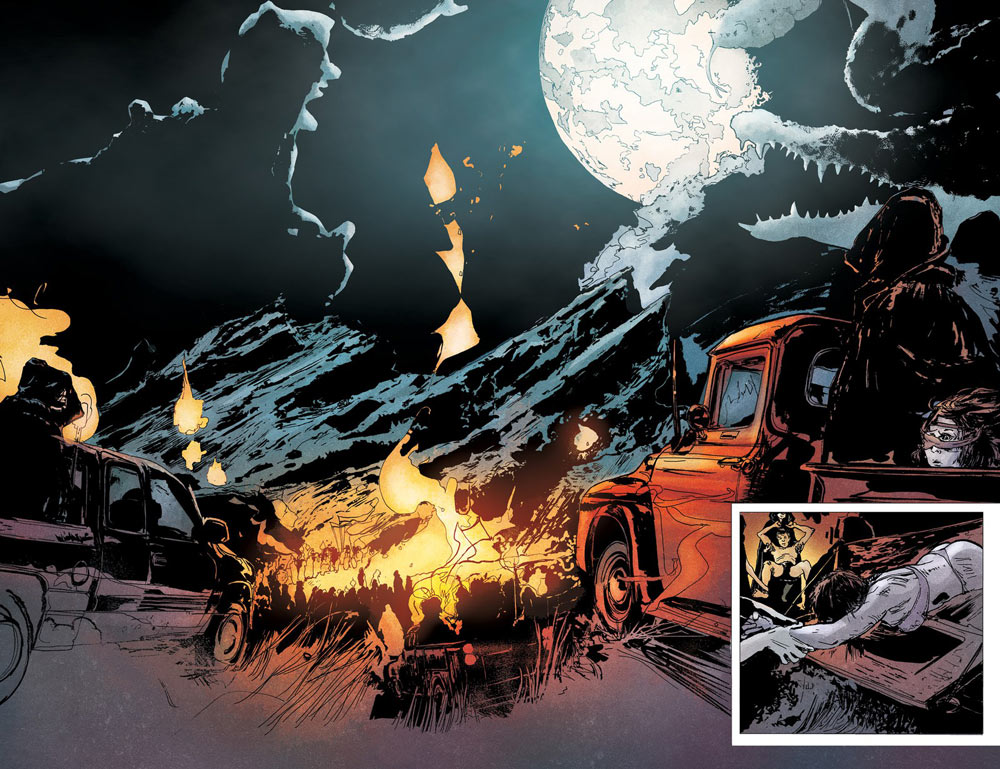 What is a typical creative working day for you?

Get up early, have breakfast, get to work as fast as I can, work through to dinner time with a lunch break, cook my partner’s dinner, maybe work after (but I’m a morning person so might go to bed and get up at dawn instead). I’ll do emails before breakfast and right now, those four or five little admin tasks you have when you make a creator owned book, as well.

Musical inspirations? Or do you need quiet to create?

I’d like to have music but I can’t have things that take my concentration. That said I’ve been having a bit of country music alternating with metal, with my Winnebago Graveyard art and that fits with the characters and makes me think of them more.

What is your favorite story to date you have ever been part of creating?

I couldn’t pick a favorite child. 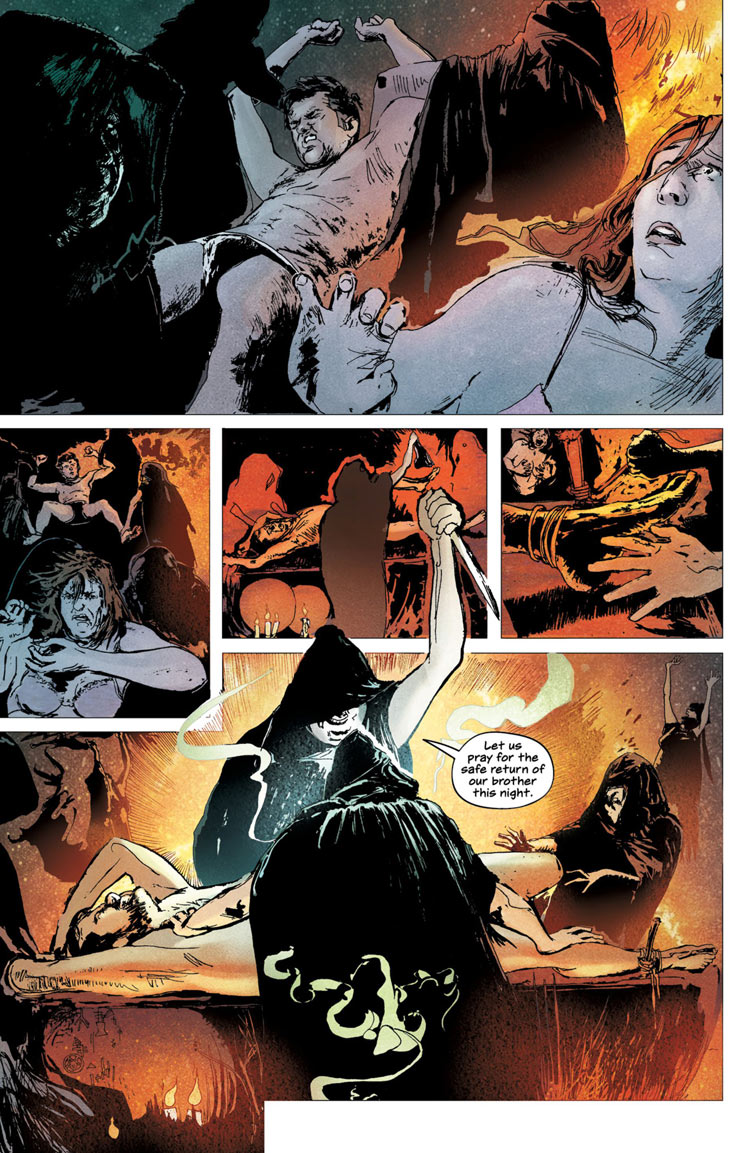 How important have you found networking with other creators and how do you approach that?

I don’t know. It is important, but I don’t think of it as a thing that I set out to do.

I like talking with creative people, though and I enjoy their company and I really enjoy the variety of lovely, smart, interesting people comics have brought into my life. I also value the support we all need from time to time. If you pursue what you are interested in you’ll find people who ‘get you’.

I also have a project called Think of a City, with a few more than 200 artists and writers on the books and have briefly worked with many as a collaborator. It’s nice to get to know people that way (which, to some extent, is enjoying an intellectual connection). 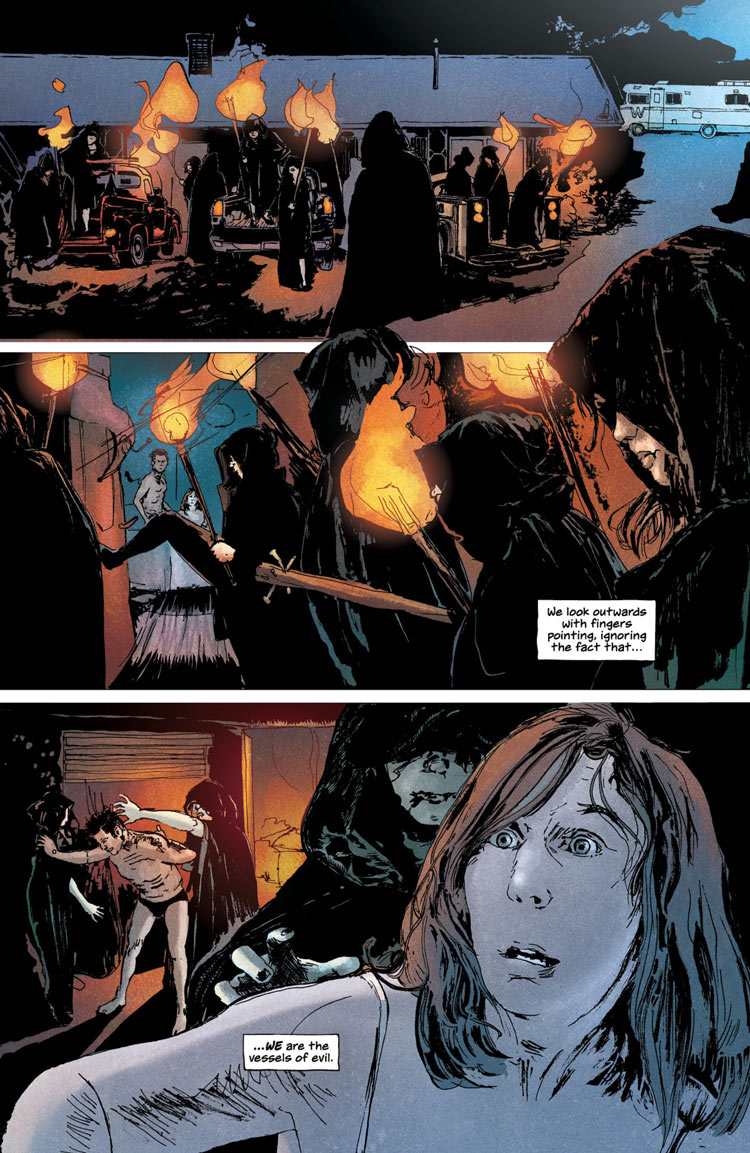 What role do you think social media plays in comics or the comics industry? How has that changed since you began?

People have retreated into work, to narrower and private networks, and possibly sometimes altogether, so the experience I had a few years ago is not available any more. There is a lot less lightness, openness, humour, and discussion than there was, and a bit of fear of being ganged up on or blacklisted.

I think with this, the role social media plays has changed. I’m not convinced it as easy to get attention for work on social media any more, and support is probably harder to come by as people have curated their streams and they’re having less chance encounters with new work- or are concentrating on promoting their own.

Social media will always work for people with interesting art as there are people specifically looking for it and to support it, but as far as the actual industry (professional work) goes, I’m less sure. If people with creator owned work only use their feed for sales, does that make them boring, or does it make them look professional?

Either way, it marks a retreat from the social and into a position behind the work, and there is less interaction. 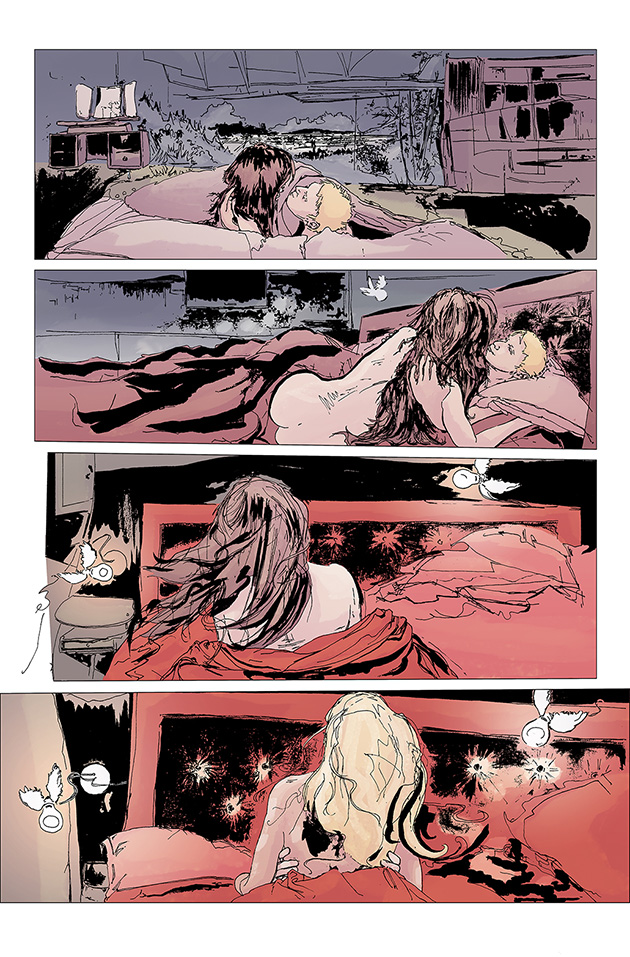 What is some advice you wish someone had given you before you began working in the comic medium?

Take control of what you are doing, be it with a timetable for script to be delivered (waiting for script is my nemesis), coloring, lettering or designing your own work, having a clear line of communication with your publisher so you can make and deliver your book properly, working towards the best workflow for you, if someone doesn’t or won’t give you a contract, give them one, etc (or get out, obviously).

Don’t make assumptions a writer on a creator owned project plans to do more than writing the script — you might have to do a lot more than just the art to get your book on the shelves, so know that going in. 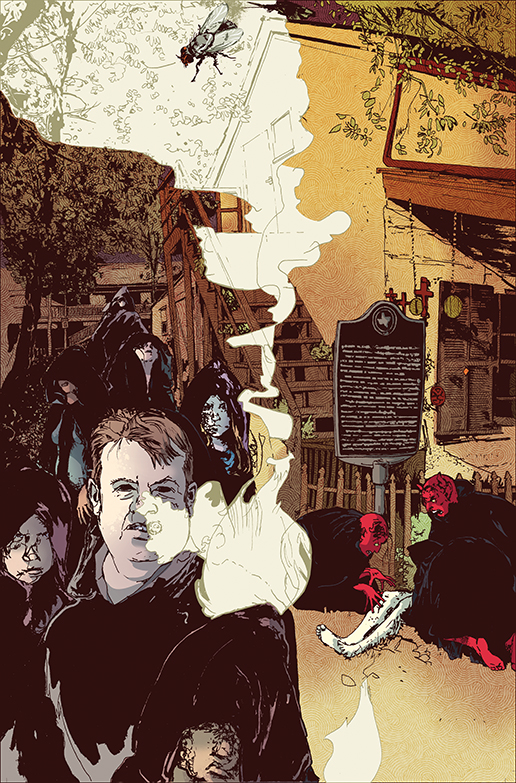 What do you find the most frustrating thing about the comic book industry?

The idea that the only work of importance in comics is done for two companies in the direct market.

That is not a criticism of these companies — they are businesses and it is their prerogative to employ people or market themselves however they like. My frustration is the common perception among so many people that these are the *only* important or ‘good’ works, when in fact there is a larger world, comprised of everything else (eg Raina Telgemeier’s Smile, Inio Asano’s Goodnight Punpun, Katie Skelly’s My Pretty Vampire) in a parallel universe right next door. They remain undiscovered because they are not deemed ‘good’, when in fact it is more they just don’t fit into a specific notion of craft/genre — and they don’t come from these companies.

(Also, I don’t think the ‘comic book industry’ is an industry, per se. It is more a scatter of people making a medium of work in a whole variety of ways and scales. I’m not sure there is sufficient glue, across the form, to call it an industry.)

What message do you hope people get when experiencing your work?

When it comes to comics, “all I want or dream is …”

…to be happy and to be paid. 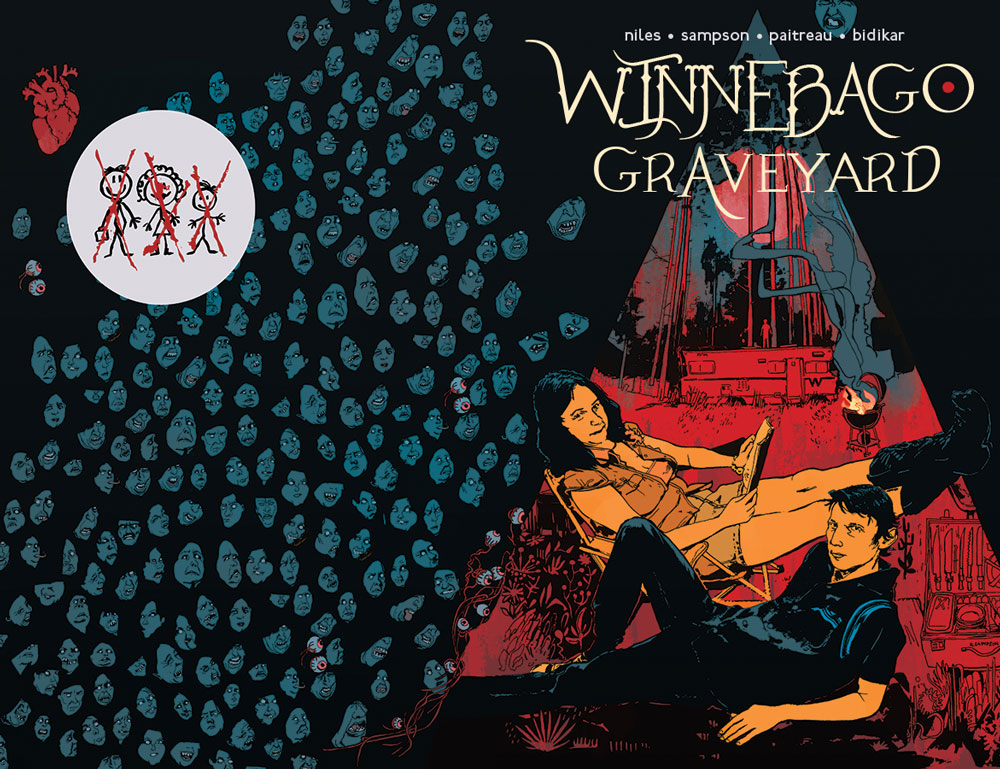 In WINNEBAGO GRAVEYARD #1, an American family traveling on vacation finds themselves stranded in a small town with a sinister secret. This horror-adventure story about a family stuck on a road trip gone terribly awry is filled with creepy fairgrounds, nefarious characters, seedy conspiracies, towns full of satanists, and a teenager. What else could possibly go wrong?

Now THIS is more like it. Stunning visuals and an upsetting premise, or vice versa. I like my polite suspense, don’t get me wrong. Articulate vampires and well-bred rippers, I like them just fine.

But when I want horror, give me a crooked, unhinged carnival every time.

Everything about this book gives me the willies, and that’s a lot harder to do in comics than many people think–the painful testimony to that simple fact is the dozens of easily forgotten books that made the attempt.

But this book reminds me of aggressive carnies and rancid hot dogs. The supernatural threat almost fades in significance, compared to the canny evoking of a diseased food trailer, pitching God-knows-what to God-knows-who.

Steve Niles is one of my favorite writers, and one of the desiccated handful who can pull of a great goosebump maker in comics form. Alison Sampson matches his fever and maybe goes a few steps further into the bog than even Steve’s script seems to demand.

Can’t wait to read the rest. Sign me up with a poison wristband for unlimited rides, alright, guys?

Where you can find Alison Sampson: