They are our HERoes 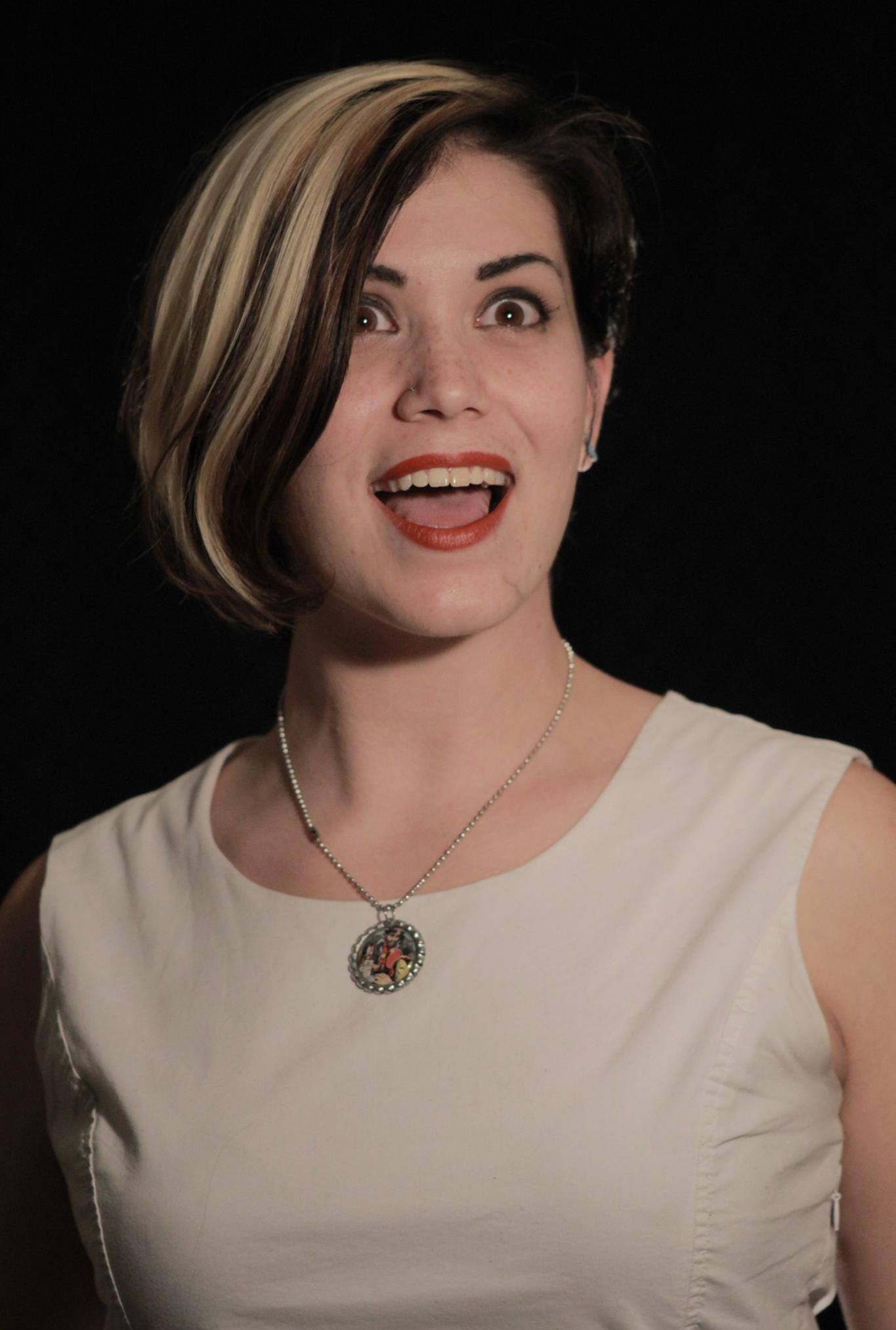 Tini Howard is living the dream of many comic’s fans and writers. She was plucked from the entries of hundreds as part of Top Cow’s Talent Hunt competition. Now, her book Magdalena: Seventh Sacrament has hit comics store shelves this week. We were able to get a chance to ask her about her favorites when it comes to comics.

Tini Howard: I am always dreaming up visual stories in my head. Comics are the best way for me to write out a script and sort of direct my head-movies without a Hollywood budget.

TH: I love creating in a sandbox, being asked to deliver a new story for an existing character, or meet a need in an unpredictable way.

TH:I have said this before, but Matt Fraction’s Invincible Iron Man is what made me think I could write comics. Not because I think I’m that good – I’m certainly not – but because previously, I thought writing comics was for a different kind of person. IIM was achingly real to me, it turned Tony Stark into someone relatable, who had problems that weren’t TV-kid problems or superhero problems. They were grown-up, scary problems, like addiction and having to convince people to believe in you after you’ve screwed up.

I still love Tony Stark. Oh, and I’m a lot like Dick Grayson at my best, and Francine from Strangers in Paradise at my less-great.

TH: I need coffee and music and to give myself a deadline. I work best when I’m alone in my office, even the cat and the dog have to go. I get some of my best ideas when I’m in a place where I really can’t write, so if I feel blocked, I take a shower or go for a drive. The second I’m away from my computer, the ideas come.

I read and speak out loud a lot. I’m the worst kind of writer to live with.

TH: I’m a playlist girl. I tend to make playlists while I’m still formulating the story, to find songs that make me feel the way I want the story to make readers feel. For example, my entire Magdalena story was written to Bat For Lashes’ Two Suns album, a few Enigma songs because they make me feel churchy, and a little Antichrist Superstar if I got bored.

TH: When Alison Bechdel was named a MacArthur Genius this year, I took the opportunity to get into her cartooning work, and I’m so enamored of it right now. It’s full-on philosophy, and I marvel at it.

As for fictional characters, I love that we’re seeing female protagonists who make bad decisions and aren’t always good girls. I think it’s important for women to see unlikeable traits in our sympathetic protagonists. It’s much more common in male protagonists – John Constantine’s a jerk, Batman’s emotionally constipated, Cyclops thinks he’s right all the time – but not so much with women. Strong women don’t have to be right all of the time, and I have a real desire to write women like that. I get so angry along with them, women like Alana from Saga, Sara Pezzini in Witchblade, Polaris in All-New X-Factor. I don’t always agree with them, but I love to see them make bad choices, because it makes them more real. 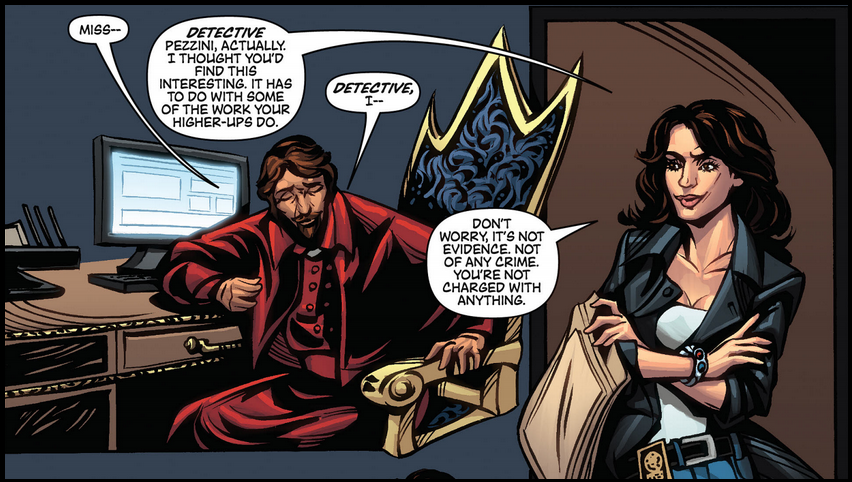 TH: My Magdalena story was very dear to me, while I was working on it. I’m writing a series now that is entirely my own, and it feels crazy to be doing that. All of my favorite stories are ones I haven’t had the chance to write up yet. I think that’s a good thing. The best is yet to come.

TH: There are so many stories out there that we haven’t seen yet in comics, because we haven’t yet put women at the helm to tell them. We have so much perspective to bring that’s been silenced for so long. Once we start putting women among our best and brightest, it’s going to be a renaissance. We’re going to unlock an entirely new dimension of comic storytelling, especially with superheroes. I’m so stoked.

TH: It’s exciting to see that someone you respect is watching you. It keeps me honest and well-behaved. I’m still pretty early in my career, and I credit social media for helping me find opportunities and make friends. I hope that doesn’t change, because it’s great.

TH: Story elements that have fallen out of favor will come back in. Not because they’re inherently feminine, but because we’ve associated them with the feminine, so they get a bad rap.

That Marvel 75th anniversary issue that came out had a joke poster for a book called X-Mwah. It was a great joke, but ever since then I’ve felt like Marvel should be doing that. Romance comics used to be a huge market – can we bring them back with superhero side characters? I’m not saying that’s what all girls have to write – but I’d be into it.

TH: Plan out your words visually, so you know how much space they take up. Pitches don’t always go places. Rejection’s part of the game.

TH: I really enjoy the escapism that comes with a good story. Even more, I enjoy the intense relatability of a really great story. I just want to bring that to someone else. 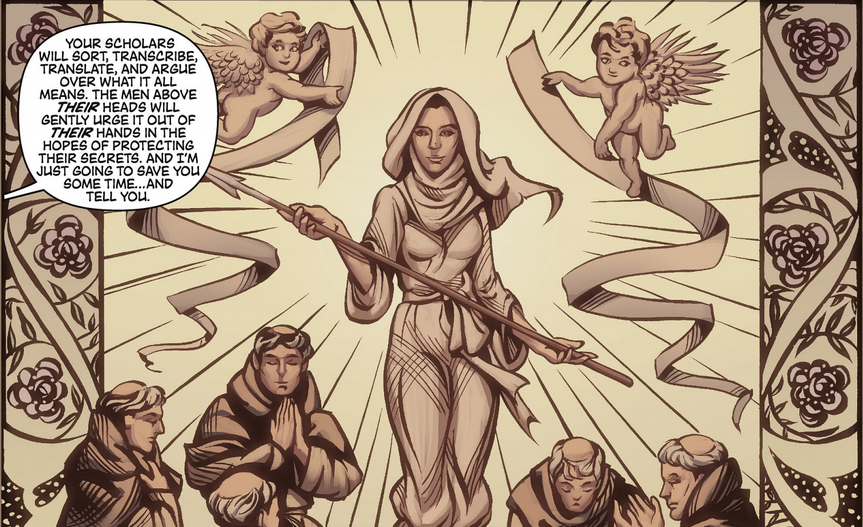 TH:…I want to see diversity of story, and of writers of those stories. I want comics to be widely known as a place for all stories, and for people to stop feeling shocked that comics, even superhero comics, aren’t what they were expecting. These are real books, they make me feel real things. Maybe you cry at The Fault in Our Stars and I cry at Under the Red Hood, but we’re both digging some really powerful fiction.

Comics has a real glass ceiling, so I get a little Leslie Knope about it. I want to see women in chief creative positions. I would be honored to write Wonder Woman, but what if I want to write Batman? I want to see women leading writer’s retreats and writing solo male hero books and team books and horror books. I want the keys to the house, not to just feel like a guest who has to clean up after herself and stay in her room. I’m a Slytherin at heart, I get ambitious.