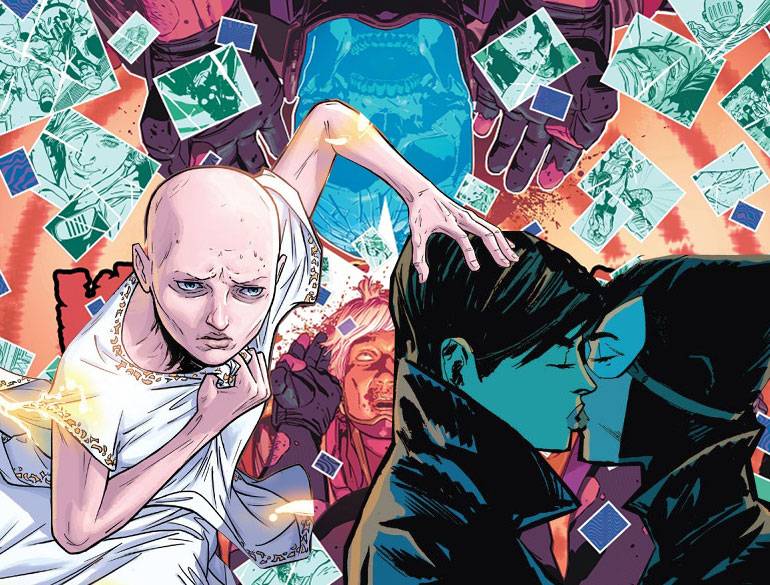 Some moments are just big. There are pages and panels in comics that just about make you drop the issue or tablet and blurt out “Holy Shit”. In honour of those big, crazy, moments, we’ve created this article highlighting ten events in comics that left us speechless and/or dropping profanities this year. There are HUGE SPOILERS in the article below, and parts are NSFW as well, so consider yourself warned! The following are in no particular order, they all floored us!

***ANOTHER SPOILER ALERT – SERIOUSLY, HUGE SPOILERS PAST THIS POINT*** 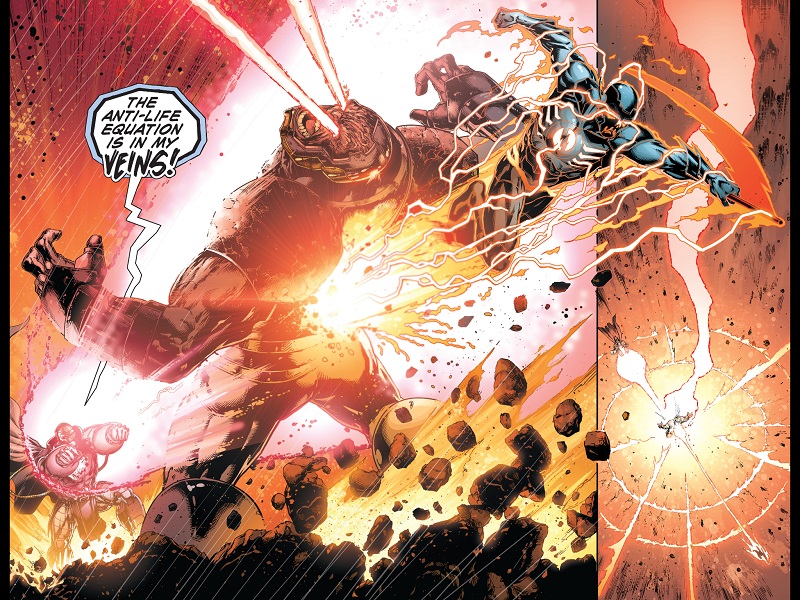 In a completely unforeseen turn of events, Johns and Fabok upset the applecart and killed Darkseid, who has been firmly established as one of the most powerful beings in the entire DCU. The Flash, newly minted as the Avatar of Death with the power of the Black Racer, carved through Darkseid as the Anti-Monitor unleashed a huge salvo, disrupting the balance of the DC Universe and taking The Darkseid War to the next level as an event. Darkseid’s death has ushered in a crazy time of Justice Leaguers being imbued with the powers of Gods, and it’s loads of fun. 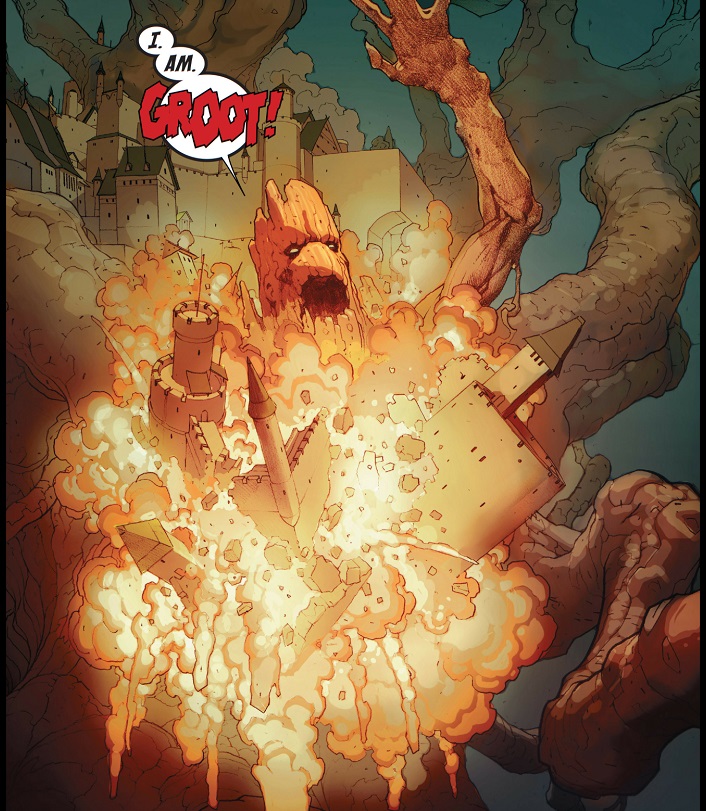 Speaking of Gods….Groot’s got something to say about a recently-almighty figure in the Marvel U.

Groot’s been a lovable badass since his early days as a Guardian when Abnett & Lanning wrote him, but Hickman & Ribic take the mighty tree to a whole new level in Secret Wars as he topples the castle of a God. Who knew there was a stowaway survivor from the 616 in Peter Quill’s pocket? Doom’s the man, but I couldn’t help but gasp when Castle Doom simply caved under the power of the mighty Groot.

A GOD IS BORN, JUST TO DIE 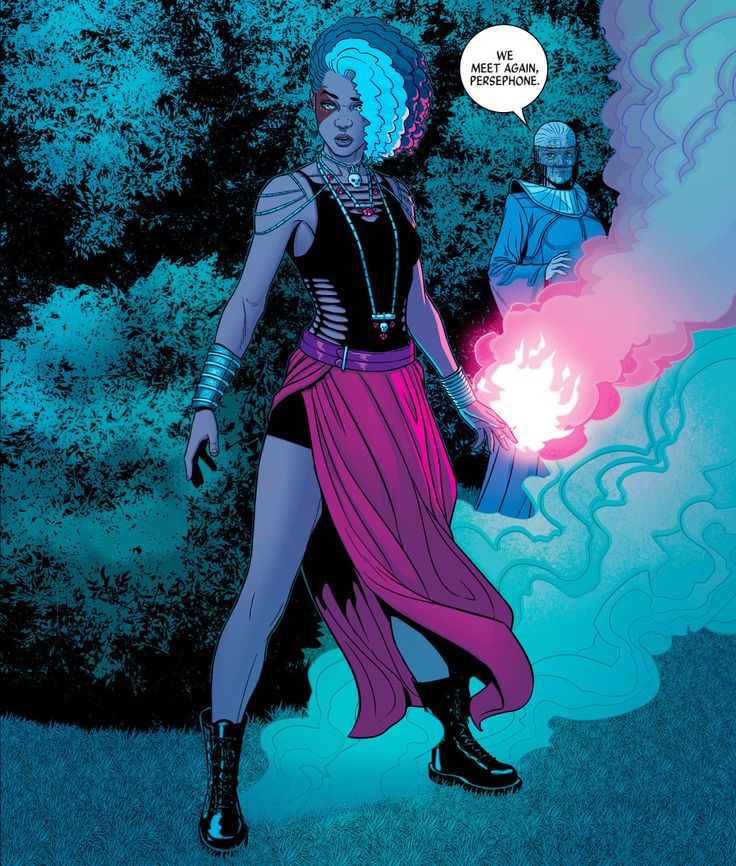 So….we’re a bit obsessed with Gods in this list, it would seem. Here’s what Alison Baker had to say about this Holy Shit moment:

“Just as Laura is getting close to solving the truth about what happened to Luci, Ananke shows up in her backyard, revealing that Laura herself is the 13th god of the Pantheon – something unheard of, and of course, Laura’s dream (“I want everything you have.”) Sporting a beautiful design that mixes underworld and florals, Ananke asks her “Aren’t you going to sing?” Laura opens her mouth, tears streaming down her face, and then we see Ananke’s hand…..and she snaps her fingers.

Killing Laura, our OTHER protagonist.

And, of course, finally revealing herself as the true villain of the piece (for now), rather than the kindly wise old lady who protects the gods. NONE OF US HAVE RECOVERED.”

SITTING ON A PARK BENCH 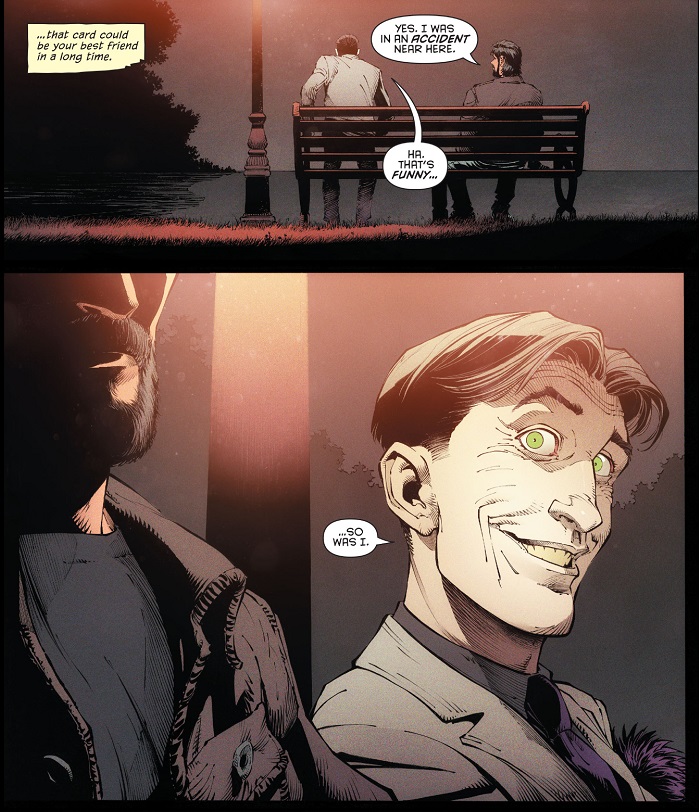 That creepy son of a bitch survived. And he’s still creepy as all hell.

It was a shocker when Snyder et. al revealed that Bruce was still alive, and even though we knew the Joker’s body wasn’t recovered, I wasn’t expecting to see the bastard back in the mix this quickly after his epic battle to the death with Batman to close out the Endgame arc. His pale face smiling while sitting on that bench….it damn near made my stomach flip. Ring the bell, the never ending conflict between Batman and The Joker appears to be primed for another round. 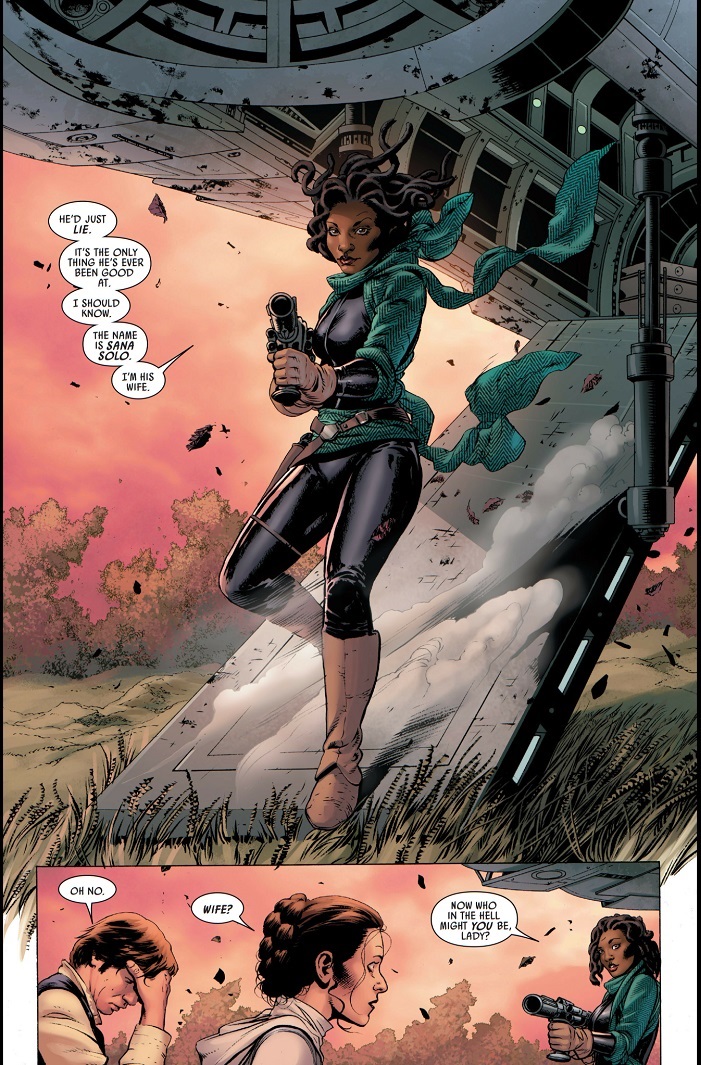 Wait, what now? Han Solo was married….and it wasn’t to Leia? If you’ve stayed current with Star Wars you’ll know this reveal wasn’t all that it appeared to be, but nevertheless this one floored a TON of people. It showed that this comic wasn’t just going to play it safe and not affect what was known continuity and left a lot of jaws gaping. This reveal had people speculating about the end of Episode VI, if Leia and Han didn’t stay together because of this marriage, if Finn from The Force Awakens was Han & Sana’s kid, and so much more. 6 issues into this series and Aaron, Cassaday and Martin floored Star Wars fans and had them talking. Aaron’s gone on to show reader’s Leia’s first ass-kicking time wielding a Lightsaber and much more, keeping readers on their toes about what they know about the Star Wars Universe.

YUP, THAT’S A PENIS IN A JAR 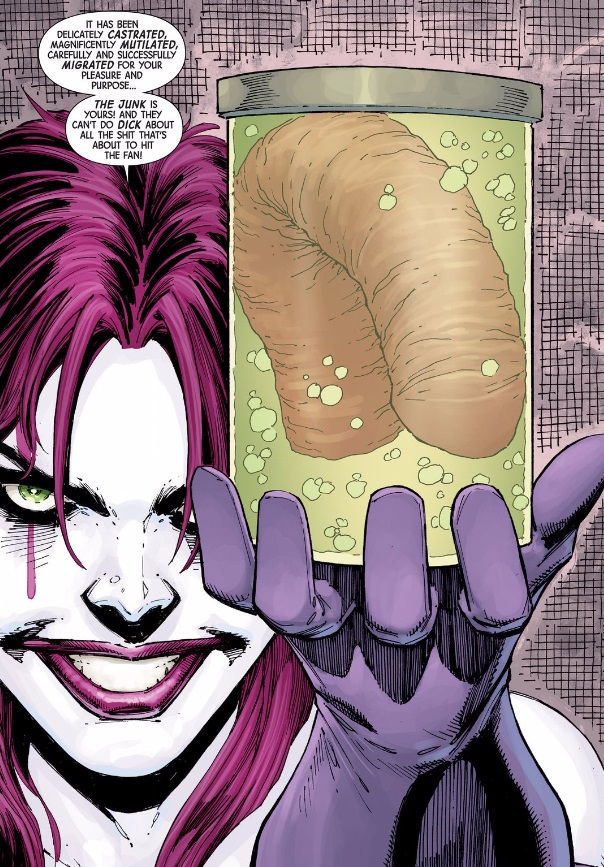 Gonna hand the mic over to Keith Callbeck for this one:

“Rob Liefeld returned to Image with one of the most controversial issues of the year, Bloodstrike #1! Page one kicks off with Operative: Alpha hanging from chains on a wall, his body from the rib cage down having been removed. As the issue progresses, Alpha slowly regenerates, but he is horrified to see a certain lower appendage is missing from his regrown body. The final splash showing the new owner of Alpha’s manhood had heads turning and artists consulting anatomy books to find out where Rob got this curious reference shot.” 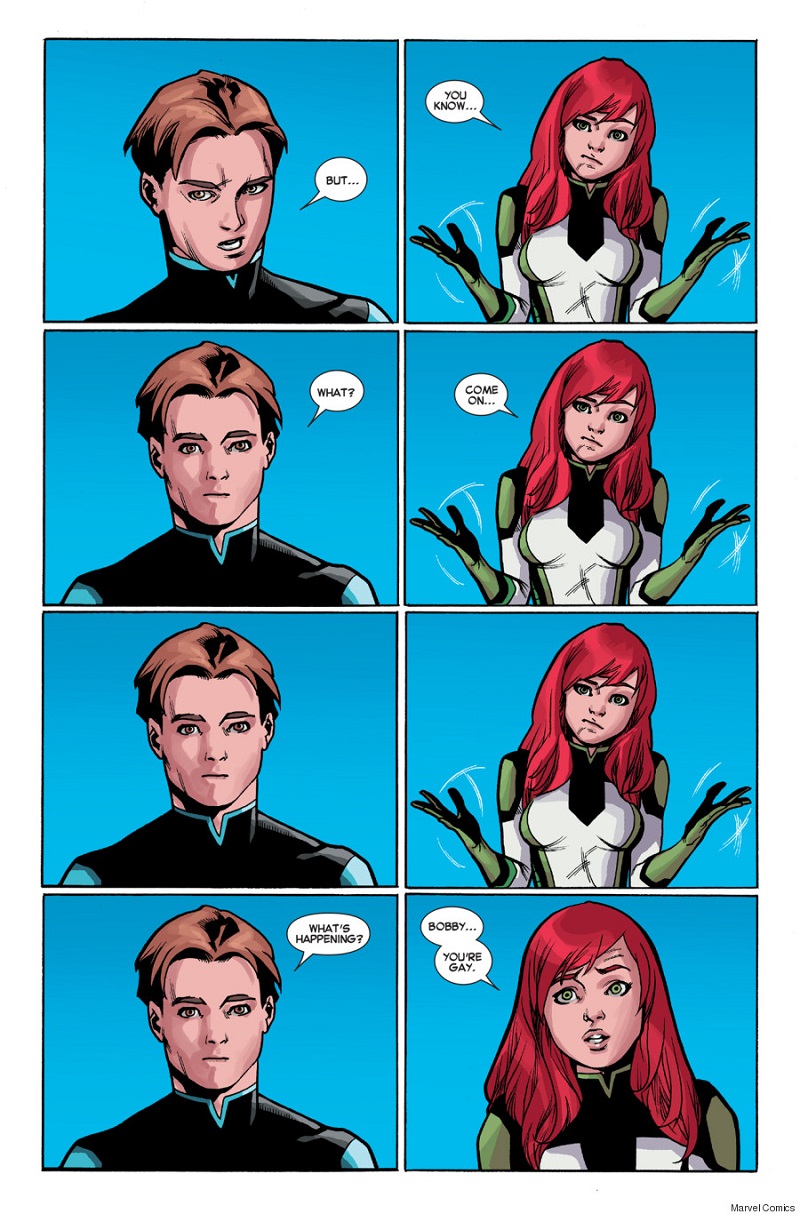 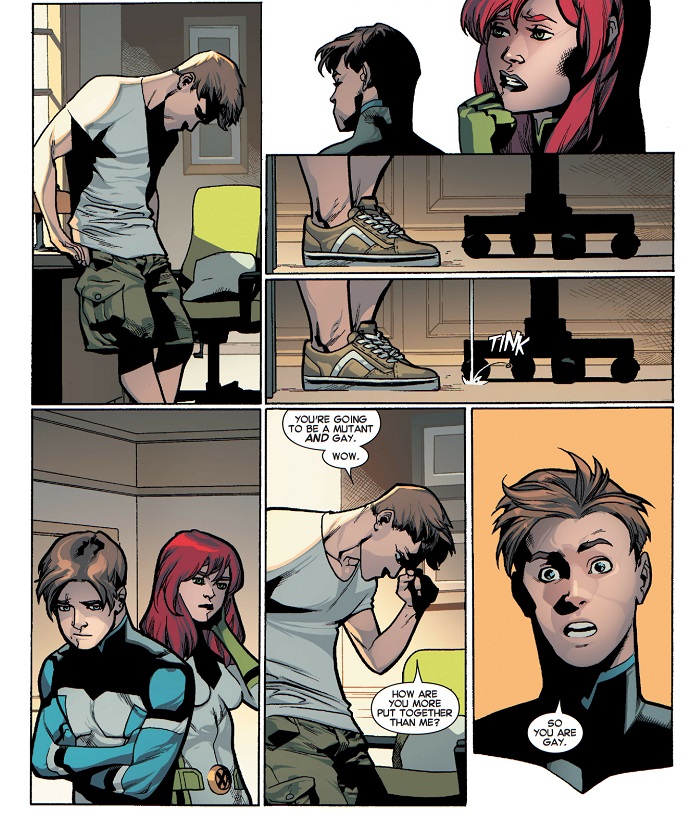 In a year where Marvel’s senior editorial has made misstep after misstep from a representation standpoint, one event stood out as both unforeseen and important: Iceman, one of the original X-Men and highest profile mutants in the roster, came out. Initially, after the release of All-New X-Men #40, there was confusion about whether or not it was only the younger, time-displaced Bobby Drake and what this could mean for the older Bobby, but Uncanny #600 explained it all. This revelation wasn’t without controversy and there has been a lot of discussion around the way Iceman came out and the topic of bi-erasure, but it was a major moment nonetheless and caught everyone’s attention. 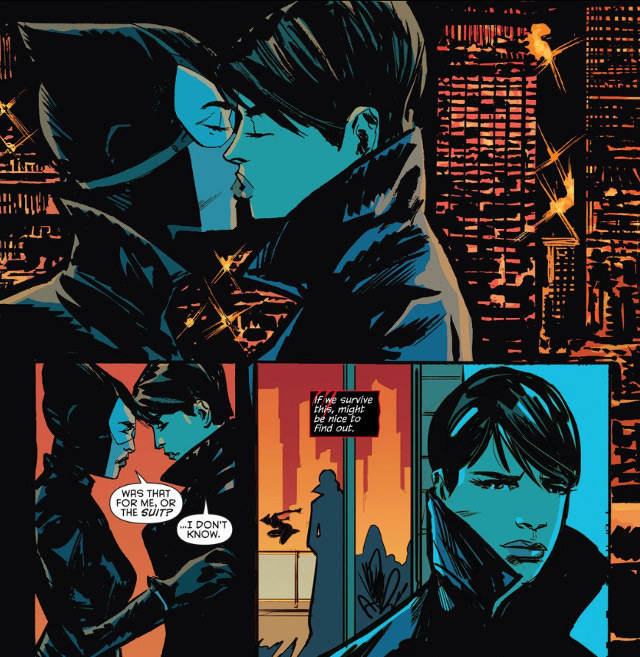 Countering Marvel’s missteps were a grand number of DC successes (10 of which are highlighted here), one of which floored readers everywhere. The mic goes to Matt Santori for this one:

“Look. Nothing says commitment to queer representation like letting years of fan speculation and writer innuendo get formalized on the page, especially when it’s for one of your company’s most famous A-list characters. Were any of us surprised Catwoman is bisexual? Maybe. Maybe not. But were we impressed with the bravado and heart writer Genevieve Valentine, artist Garry Brown, and DC Comics as a whole showed with bringing Selina’s now-most-famous kiss to the public this year? Absolutely. Add to that the creation of a brand new queer woman of color in Selina’s ill-fated love Eiko, and we have just a few of the brilliant elements that made us love this year of Catwoman so much.”

MIDNIGHTER TORCHES HIS OWN PAST 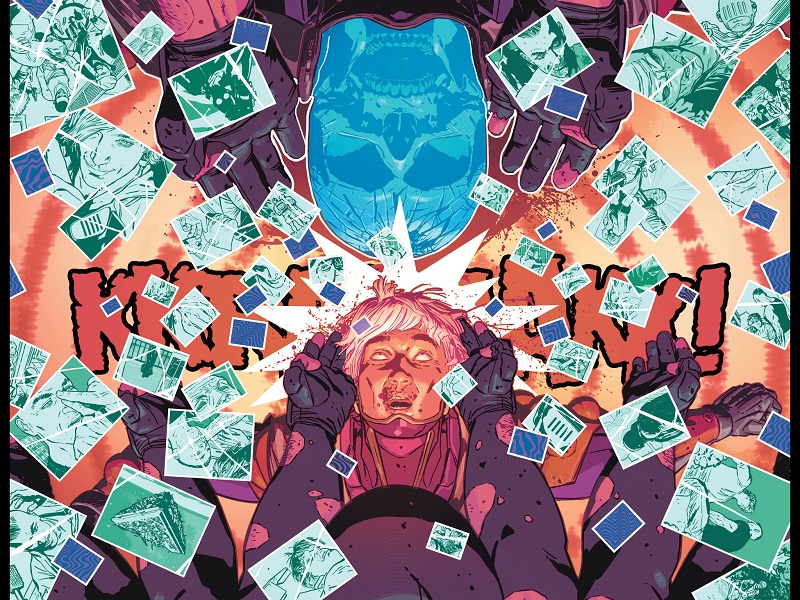 After a brutal fight – this one was a slobberknocker – between Midnighter and Prometheus, Midnighter sacrifices his memories and the only record of his past to neutralize his foe. This is no small thing, giving up one’s entire past & history to deal with a massive threat, but Midnighter does it seemingly without hesitation and with extreme prejudice.

It’s a crazy visual, absolutely nailed by ACO, and highlights how this character is different than so many others. Steve Orlando has done great things with this character and this moment had a visual & story impact. 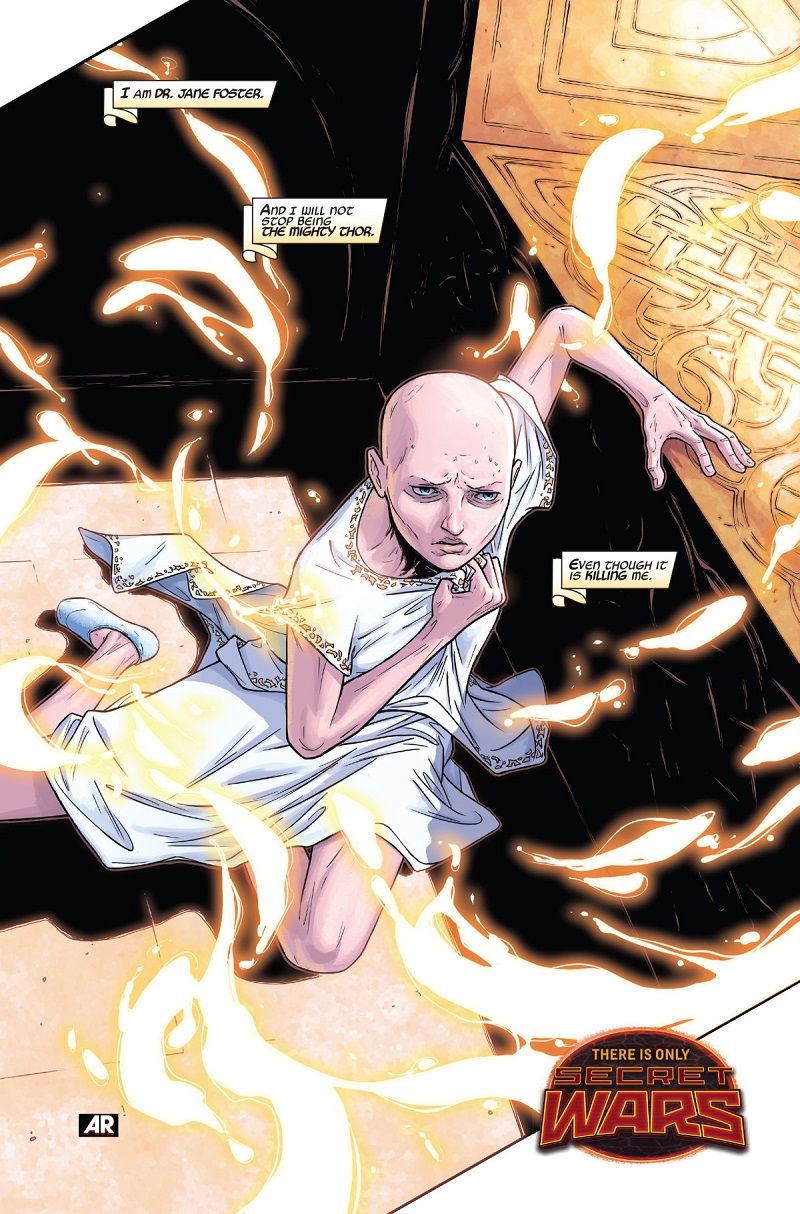 Yeah, we’re totally obsessed with gods…From the moment it was shown that the person holding the Odinson’s hammer was a woman, there was speculation as to her identity. The Odinson was obsessed, Odin still is obsessed and readers…readers had a fever. Many of our staff members had/still have the fever, and our 10 Reasons to Read THOR still ring true now that the identity of Thor is known.

While the field wasn’t very large and Jane was one of the heavy favourites, it was still pretty astounding to see her revealed as the hammer-wielding badass we’d all grown to love in a very short time. Her human form’s weakness due to her disease juxtaposed with her power while wielding the hammer is a visual that Russell Dauterman excels at and Thor #8 is a comic that people will be remembering for a very long time.